Accessibility links
Why Infanticide Is A Problem In Senegal : Goats and Soda It is the second-most common reason women are in jail in Senegal.

Why Infanticide Is A Problem In Senegal

Why Infanticide Is A Problem In Senegal 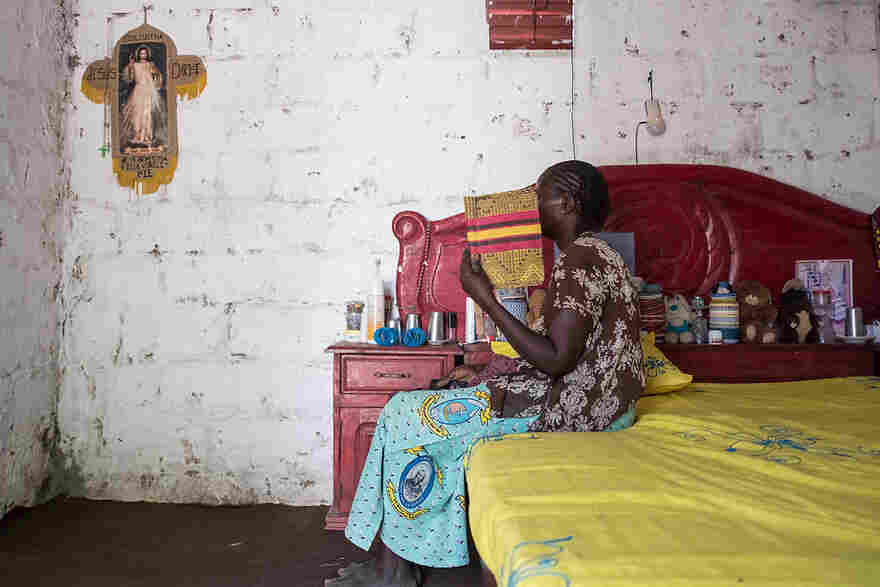 E delivered her eighth child and says the baby was stillborn. She was arrested and found guilty of infanticide but was released for good behavior after serving 3 years and is now living on her brother's farm in a small house. "It's better to be free without money than trapped between four walls," she says. Ricci Shryock for NPR hide caption 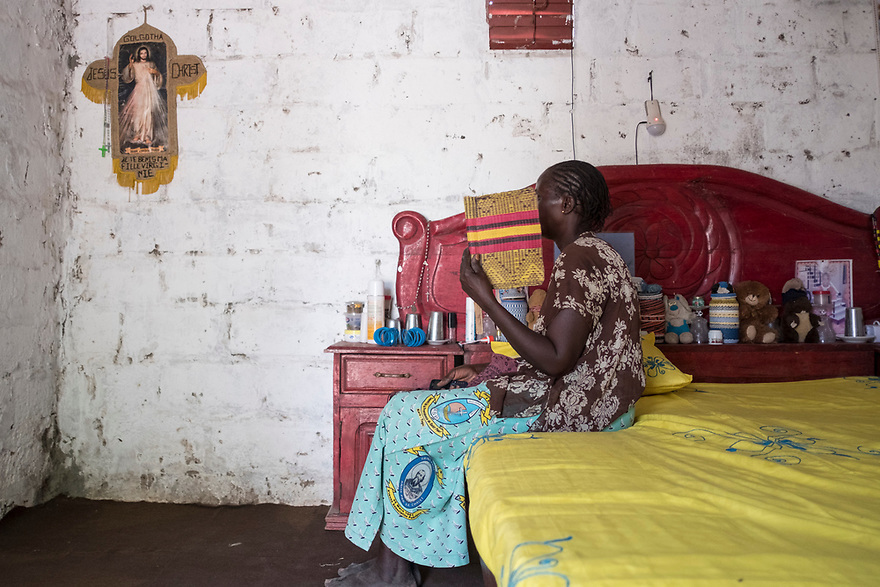 E delivered her eighth child and says the baby was stillborn. She was arrested and found guilty of infanticide but was released for good behavior after serving 3 years and is now living on her brother's farm in a small house. "It's better to be free without money than trapped between four walls," she says.

Editor's note: This story is about infanticide — the killing of a newborn baby — and includes graphic descriptions of that practice.

We had to pass two strictly-manned, massive gates to access the inner courtyard of the prison in Thies, the third largest city in Senegal. The women's ward was off to the right, behind another wall and another smaller gate. It was like a small house, a cramped concrete structure without cells or bars. On the ground, mattresses were pressed against each other, blanketing the concrete floor. Women sat languidly on them or clustered in the courtyard outside.

We were here to speak to women accused of infanticide — killing their newborn baby. It is the second-most common reason women are in jail in Senegal (drug trafficking is number one.). In 2015, 19 percent of the country's 283 female prisoners were in prison for the crime of infanticide, according to the United Nations Office for Human Rights in West Africa. "It's a practice, it's a very common practice," says Moustapha Diakhaté, a member of parliament, "it's terrible, there are an enormous number of cases. There is a lot of infanticide in Senegal." 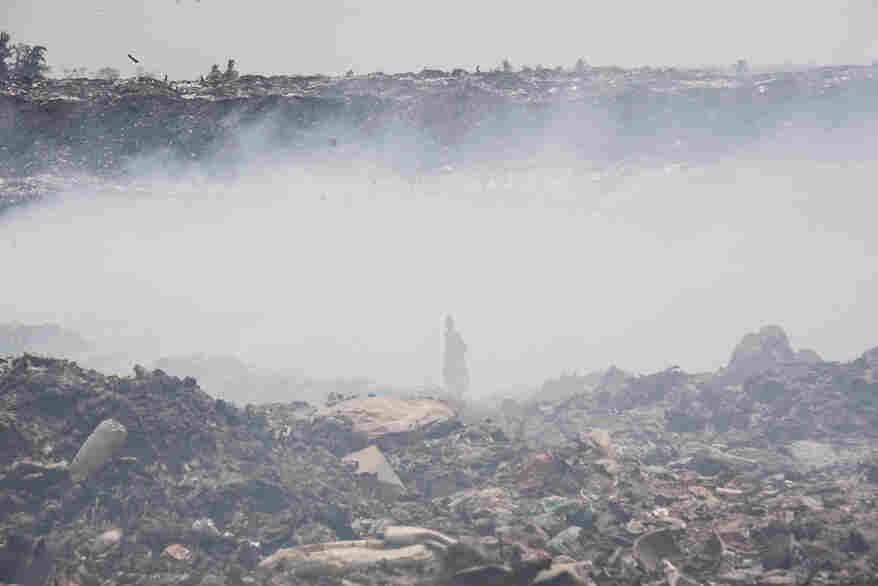 Dozens of corpses of newborns have been found at the Mbeubeuss landfill on the outskirts of Dakar over the past few years, according to El Hajj Diallo, president of the dump's waste management workers. Many infanticide cases begin when a baby is found in a dump, an alley or a septic tank. After seeing so many corpses, Diallo supports abortion for pregnancies resulting from rape or incest. Ricci Shryock for NPR hide caption 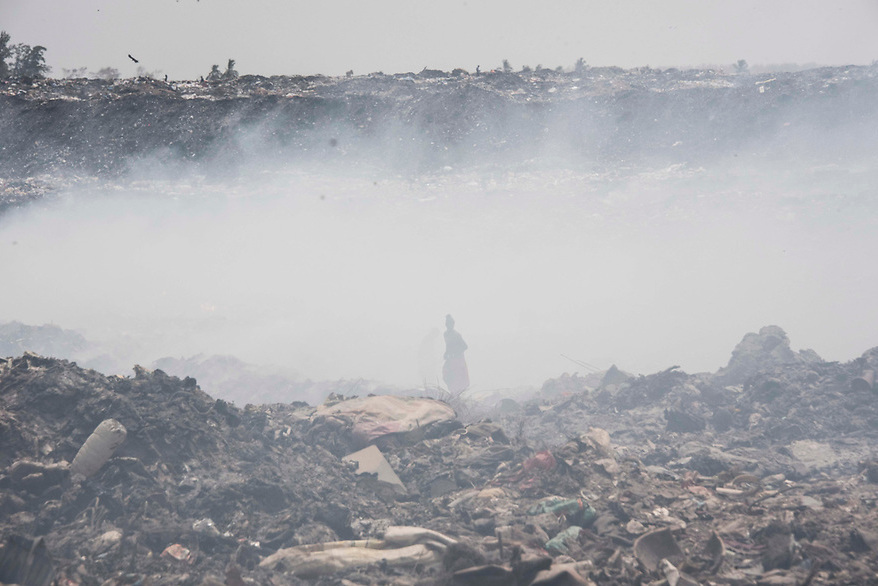 Dozens of corpses of newborns have been found at the Mbeubeuss landfill on the outskirts of Dakar over the past few years, according to El Hajj Diallo, president of the dump's waste management workers. Many infanticide cases begin when a baby is found in a dump, an alley or a septic tank. After seeing so many corpses, Diallo supports abortion for pregnancies resulting from rape or incest.

In some countries, like China and India, this practice has been employed by families for gender selection: families who prefer boys choose to kill infant girls. But in Senegal, experts say, infanticide is not related to gender. Rather, it is a response to taboo pregnancies, carried out mostly in isolation by women. "I hid [my pregnancy] because I was surprised and I was in shock. I was also scared of what my in-laws would say," said F, a woman imprisoned for infanticide.

Due to the immense stigma and social ostracization around the practice, the five women we interviewed asked that their identity be protected. They are identified by their first initial.

The women we interviewed had what would be termed an "unwanted pregnancy" in public health jargon, but the term doesn't capture the profundity of their feelings. An impossible pregnancy might be closer. One teenager was raped while working as a maid. Another woman had a brief extramarital affair after her husband left the country for work and she was living with her in-laws. "In our society, when a girl has sexual relations outside of marriage it's a dishonor for the family, even worse when she gets pregnant. The two make a double dishonor," explains Abdoulaye Thiam, director of the National School of Social Work in Dakar. "The women prefer to get rid of the baby."

The imprisoned women we interviewed were either convicted of infanticide or waiting to be judged — in 2015 over half of the country's female inmates were in pre-trial detentions, which can last for years. Some women accused of infanticide don't receive a verdict for five years.

Their memories were often cloudy and fragmented, as is typical for people experiencing severe trauma. They described feelings of paranoia, panic and shame. Sometimes their stories shifted midway through. Their complicated emotions, justifications and choices in impossible situations show how human the issue is.

Some of them cried as they were being interviewed.

"Those who commit infanticide are not in a normal psychological state. When you light a match or when a spoon falls she jumps. She believes someone is always chasing her," says Abdou Fodé Sow, director of Maison Rose, a safe house for women facing domestic violence in Dakar. The charity has hosted women accused of infanticide who were disowned by their families.

"For the media [in Senegal], these women are monsters," said Amy Sakho, a lawyer with the Association of Senegalese Women Lawyers, a women's rights organization that advocates for and represents women facing myriad legal issues, including infanticide. "I often tell [journalists] to try to see what could be behind this, to try to understand how she could have come to this after carrying her baby for nine months."

Some experts believe that the strict abortion laws in Senegal are a contributing factor. "The link we must make is between an unwanted pregnancy and infanticide. Those who commit infanticide could not access a safe abortion," said Dr. Seynabou Ba, a technical adviser at the Ministry of Health. Abortions are illegal in Senegal except when the health of the mother is in danger — and even then only with the consent of two doctors and a prosecutor. That kind of consent is nearly impossible to obtain. A task force of women lawyers, activists and lawmakers are working to change the law to allow abortions in the case of rape, incest and health of the mother, but the proposed bill is still at the ministerial level, and so far there is no date set to vote on it in parliament.

Even those who believe abortion laws should be more liberal aren't sure that would bring down the number of instances of infanticide. Sakho, the lawyer, says of her clients: "When I ask if she had the possibility to abort, she responds that it's forbidden ... all she knows is that abortion is prohibited by the law and above all by religion." Senegal is a majority Muslim and deeply religious country.

"We realize that the law comes at the end of a process. We are working first on society, mentalities and acceptance," Dr. Ba said. Activists have held public debates on TV and radio to try to gently bring people around to the idea that in the cases of rape or incest, abortion could be permissible. But it's a sensitive topic. When a mid-level imam issued a fatwa condemning abortion last year, the pro-reform activists paused activities for a few months.

She Had An Affair And Hid Her Pregnancy 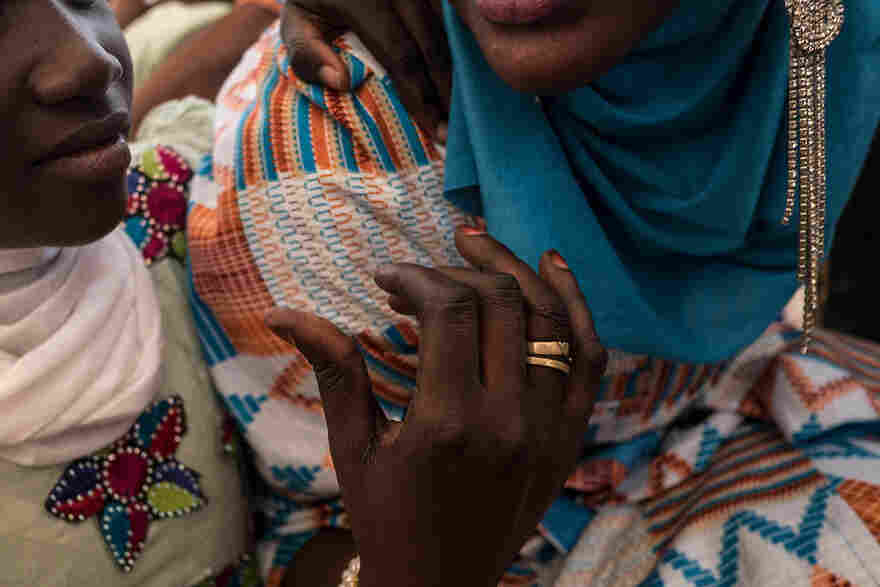 F talks to her children while they visit her in prison, where she awaits the verdict on charges that she killed her baby from an affair while her husband was out of the country looking for work. She claims the baby was stillborn but in her file there is a photo of the corpse of the child, just removed from the septic tank. Ricci Shryock for NPR hide caption

F told us that her husband was away from home for seven years, looking for work in Mauritania and then Gabon. During that time, F said, she slept with another man — just once — and got pregnant.

She cried as she described the affair. She said the man put a spell on her to seduce her: "I was never an easy woman. I just don't know what made me make a choice like that."

Living with her in-laws, she tried to conceal the pregnancy. "There were certain family members who suspected, but each time, I denied it, up until I delivered," she said.

F delivered in her bedroom alone, then said she fainted. She claimed that the baby was stillborn and that her family found her with the child in the room. But in her case file there is a photograph of the child's body, just removed from the septic tank.

Free After 3 Years In Prison

E was around 12 or 13 when she married. She had her first child soon after. After her third child, her husband died. She never remarried but went on to have four more children with another man. When he went blind, she became the family's sole breadwinner, carrying basins of water from a well to a nearby construction site and selling drinking water to the masons.

During her eighth pregnancy she continued her work and says she was exhausted, earning just a couple of dollars a day. When she delivered at home, E said the baby boy was stillborn, and she buried him in her yard. Two days later the police arrived and arrested her. She was found guilty of infanticide and sentenced to six years in prison. After three years, she was released for good behavior.

Now she lives in a small coastal town and works on her brother's farm in exchange for a small home and some food for her children. E spoke softly, sitting with hunched shoulders on the floor. While she acknowledged she is still suffering, she is grateful to be out of jail. "It's better to be free without money than trapped between four walls," she said.

The Infant Was Thrown In A Septic Tank — And Survived 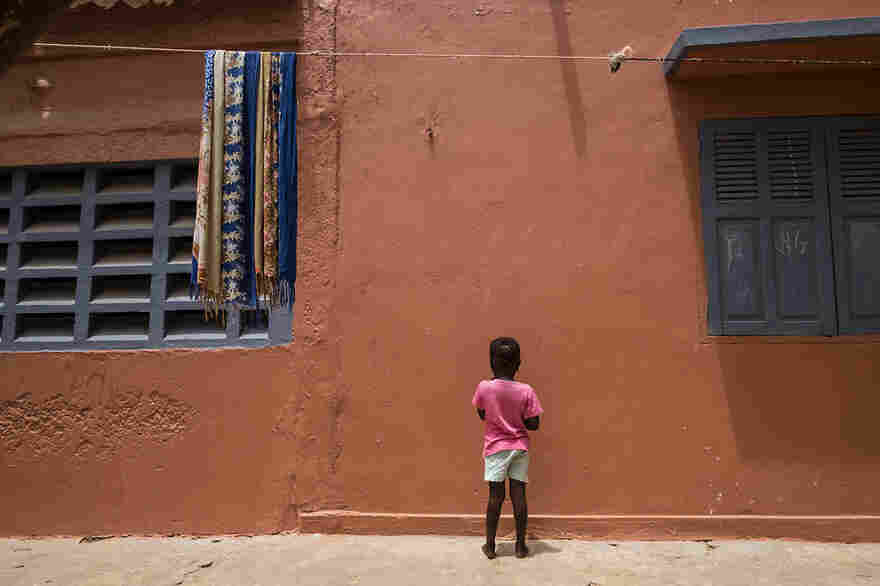 N, pictured here at age 3. Her mother and father threw her in a septic tank when she was born, but she survived. She now lives with her maternal grandmother while her mother services time for attempted infanticide. She is photographed in the family courtyard. Ricci Shryock for NPR hide caption

N's mother tried to kill her the day she was born. Her mother, B, was a student when she got pregnant. "I did not have my head in the pregnancy. I was never sick. The only thing I was thinking of was my studies," she said.

She delivered at home with her boyfriend, who told her to throw the baby in the septic tank. They did, then B went to school. She fainted and her teachers took her to the hospital, where the doctors determined she had just given birth. Though she denied it, the police went home and found newborn N alive in the septic tank. She still has a scar on her cheek where her face hit the edge of the tank when her parents threw her in. When N survived, B said, "I cried a lot, I regretted what I had done. I always said, if one day God gives me a child, I would take care of it."

Now three years old, N lives with her maternal grandmother while her mother serves time in prison for attempted infanticide.

Ricci Shryock and Allyn Gaestel reported from Senegal with support from the International Women's Media Foundation.