Accessibility links
'Genius Grant' Recipient Gregg Gonsalves Fights For Justice In Health Care : Goats and Soda Gregg Gonsalves dropped out of college, drifted around, became a health-care activist and epidemiology professor — and is now the recipient of a 'genius grant.' 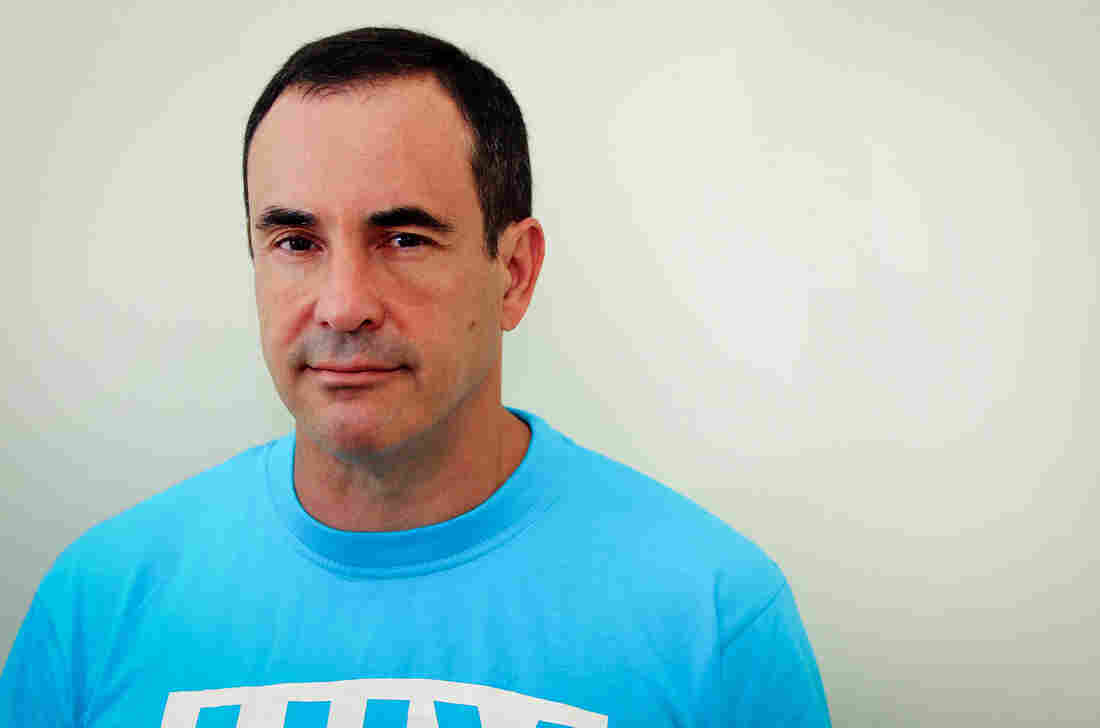 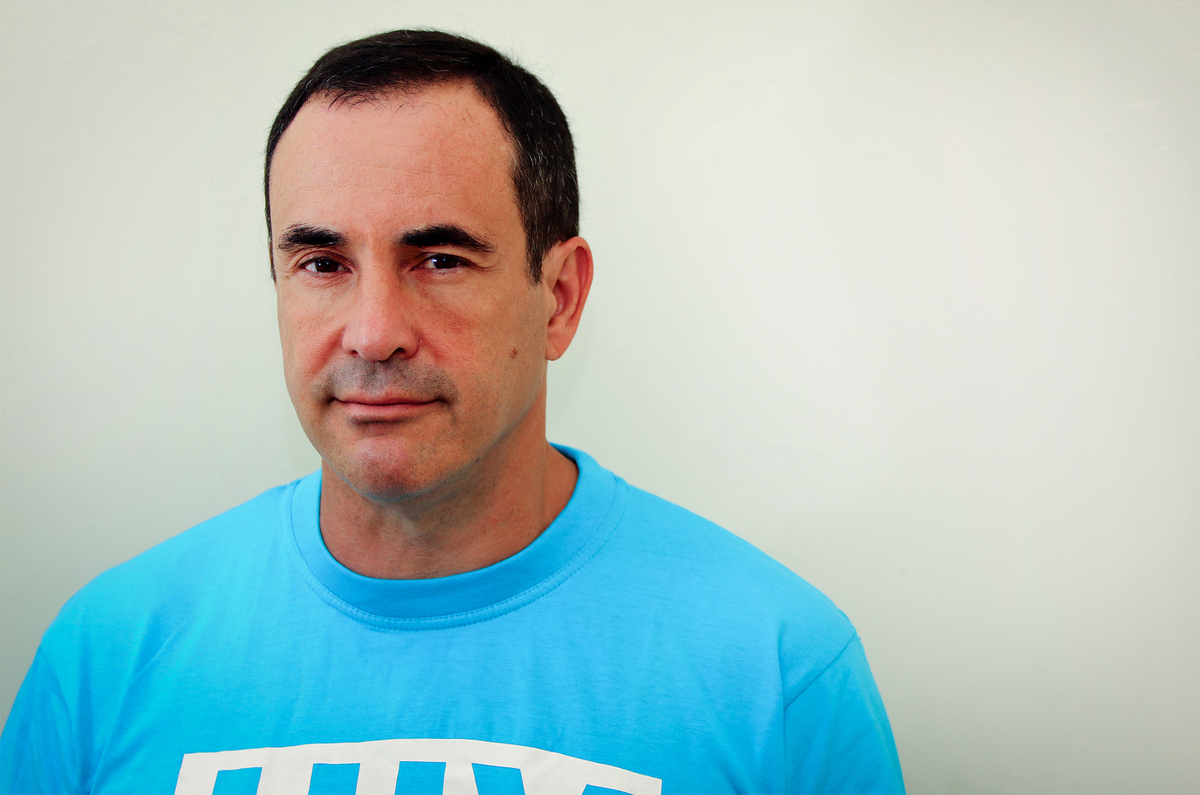 Gregg Gonsalves, a global health advocate, is one of this year's MacArthur "genius grant" winners.

Gregg Gonsalves took a wild, meandering path to the Ivory Tower. His route to becoming a professor at Yale started in street protests and spanned the globe.

On Thursday he was honored with a prestigious MacArthur Fellowship.

Gonsalves is one of this year's MacArthur "geniuses." The award from the John D. and Catherine T. MacArthur Foundation comes with a $625,000 no-strings-attached stipend.

Gonsalves says he was shocked to learn that he's getting this award. "I had no idea that anybody was scrutinizing what I've been up to lately," the 54-year-old says with a laugh.

This national honor for creativity may redeem him with his parents, who were disappointed when he dropped out of college in the mid-1980s and drifted around waiting tables.

"That was about the time I was coming out of the closet and realizing I was gay," says Gonsalves, who grew up in a conservative family of Portuguese and Italian Catholics.

"Then I met somebody who was HIV positive and that changed my life. There were no treatments for the disease then, and it was terribly scary to think about what the future was for both of us."

That moment that set him on a path for which he's now being feted as one of the nation's leading thinkers on global health and social justice. Back in the '80s he just wanted to understand HIV and found there was very little information about the disease.

"This was before the Internet," he says. "And if you wanted information on medical things you had to sneak into medical libraries or ask medical students."

He ended up joining the legendary activist group ACT UP (AIDS Coalition to Unleash Power) in the late 1980's and moved to New York as the epidemic was exploding.

"I got swept up in this movement," he says. "I joined the treatment data committee of ACT UP New York and was working on science policy and clinical research and trial design and basic immunology. I was teaching myself all these sort of things that I never sort of bothered to study in school."

Amid street protests and handcuffing himself to the gates of drug companies, Gonsalves was trying to reform how HIV research was conducted at the nation's top research institutions. They were pushing for better treatments and a broader understanding of the disease.

In 1992, still without a college degree, he co-founded the Treatment Action Group or TAG.

"One of the first advocacy projects that Gregg and I did was a review of the entire National Institutes of Health AIDS research portfolio," says TAG co-founder Mark Harrington. "And we made some sweeping recommendations to reform it and to create a stronger office of AIDS research that would have the power to create a research agenda."

Their review led to significant reforms at NIH.

But NIH wasn't the sole barrier to getting treatment for people with AIDS. The disease was far more than a medical condition. AIDS was political and it was polarizing. The Reverend Jerry Falwell called the virus "God's punishment for homosexuals." People with the disease were written off as "whores, fags and junkies," Gonsalves says describing how critics dismissed the victims and downplayed the importance of the epidemic.

"You know in a weird way the HIV epidemic was an X-ray on to the pathologies of American society and global society as well," Gonsalves says. "There was a lot of debate about who lives and who dies, who had social worth and who didn't."

He says the epidemic shaped his views on global health.

"AIDS was a wake-up call for me," he says. "It wasn't just a virus. The epidemic was man-made. It was created by inaction, sluggish responses from the federal government. And all you have to do is to move ahead in time to 2018 and you can see it all happening again. Whether it's with Ebola or other infectious diseases like cholera in Haiti, we see these outbreaks of infectious diseases that again are man-made. Infectious disease will always be with us but epidemics are a human creation."

What he's saying is that the problem is not just the disease, it's how people respond or don't respond to these outbreaks. He's taken a similar social justice-centered approach to other problems.

While working in a South African township in 2015 he analyzed the correlation between the distance women had to walk to get to an outdoor toilet and rates of sexual assault.

"The city of Cape Town was saying they can't afford to upgrade sanitation in [the township of] Khayelitsha," he says of the study. City officials, he says, argued, "It's too expensive. We can't do it."

"It made sense to increase the number of toilets in Khayelitsha both to reduce sexual assaults, but it also financially would save the city money on the downstream effects of sexual assault that they didn't think they were paying for. But they were paying for medical care, increased policing, people being out of work, families being out of work, all because of sexual violence."

Nicoli Nattrass, an economist at the University of Cape Town who worked with Gonsalves in the late 2000s in South Africa. says one of his greatest assets as an activist is his calm demeanor.

She remembers in 2008 when they were trying to convince a panel of experts at the World Bank that it was worth funding an effort to increase the number of HIV-positive people on anti-retroviral treatment — and that would slow the epidemic.

"He had those personal skills I often lack," Nattrass says, "which allows him to talk rationally and very convincingly to people even when they're being rude and hostile."

The concept of "treatment as prevention" that Nattrass and Gonsalves were pitching more than a decade ago is now widely accepted as one of the most important strategies against the global HIV pandemic.

It wasn't until Gonsalves was in his 40s that he finally decided to go to college. He applied to Yale and has been there ever since. He's now an assistant professor of epidemiology.

In 2012 he co-founded the Global Health Justice Partnership, which is a project hosted by both Yale's law school and the Yale School of Public Health.

Lately he's been looking at the link between the war on drugs in Brazil and that country's tuberculosis problem. Brazil is ranked by the World Health Organization as having one of the highest TB burdens in the world, and the problem is particularly bad among prisoners. Another recent paper he worked on considers what factors caused an HIV outbreak among opioid users in Indiana to be as bad as it was. The paper shows that if more medical services for drug users had been available, the outbreak potentially could have been dramatically smaller.

"A lot of my work is about how you get services to people who need them — and these are often marginalized and poor people," he says.

And these people could be anywhere in the world. To Gonsalves global health is about social justice. It's become a proxy for who gets access to resources, who gets sick and who doesn't, who lives and who dies.

He holds no punches in saying how he feels about nationalist movements globally including the America First ideology of President Trump.

"The entire world is moving toward a much more brutish cruel corrupt system. And you know nobody's health is going to fare well in that system because health care is way down the list of what oligarchs care about."

The MacArthur Foundation in naming Gonsalves as one of this year's fellow says he might just be part of a movement to counteract the global inequities in health. In a statement announcing the awards, the Foundation praised Gonsalves' current role at Yale.

"Gonsalves is training a new generation of researchers who, like himself, work across public health and human rights sectors, scholarly research and activism to correct disparities in global public health," the Foundation said.

Gonsalves says correcting those disparities is important whether political leaders realize it or not.

"We can't wall ourselves off in these gated communities," he says, "and think what happens in the rest of world doesn't matter."