Accessibility links
Proposal: Researchers Want To Create A Frozen Noah's Ark For Helpful Germs : Goats and Soda Researchers are proposing the creation of a refrigerated Noah's ark for beneficial human bacteria-- like the Global Seed Vault.

A Frozen Idea To Save Helpful Germs From Disasters

A Frozen Idea To Save Helpful Germs From Disasters 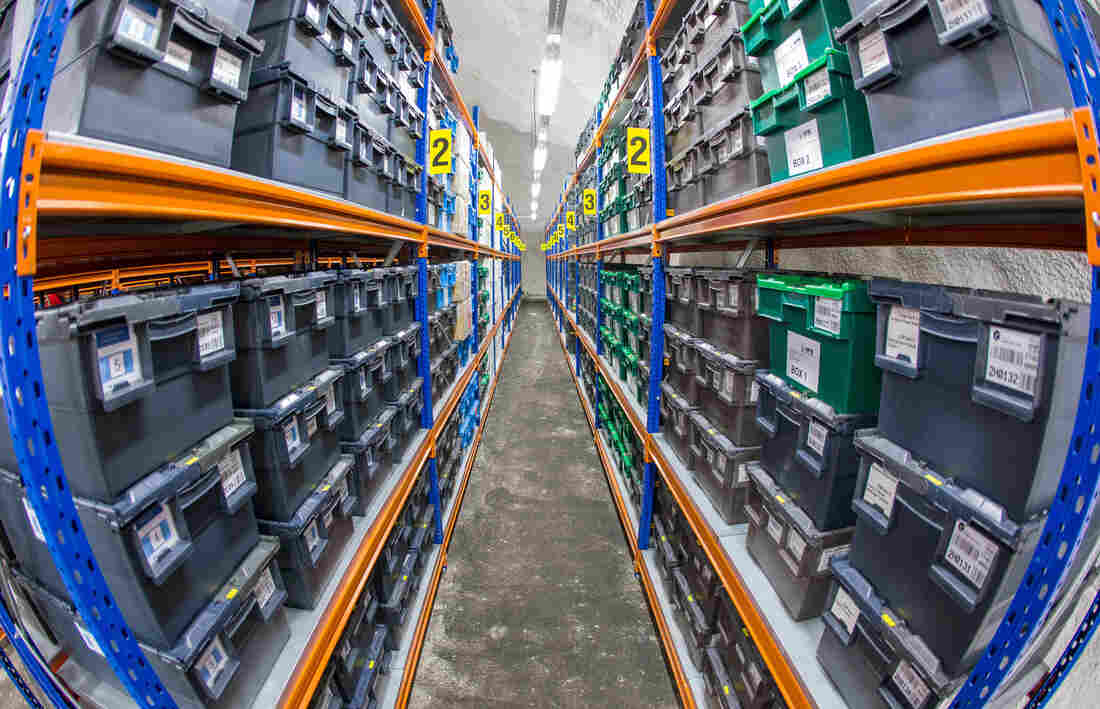 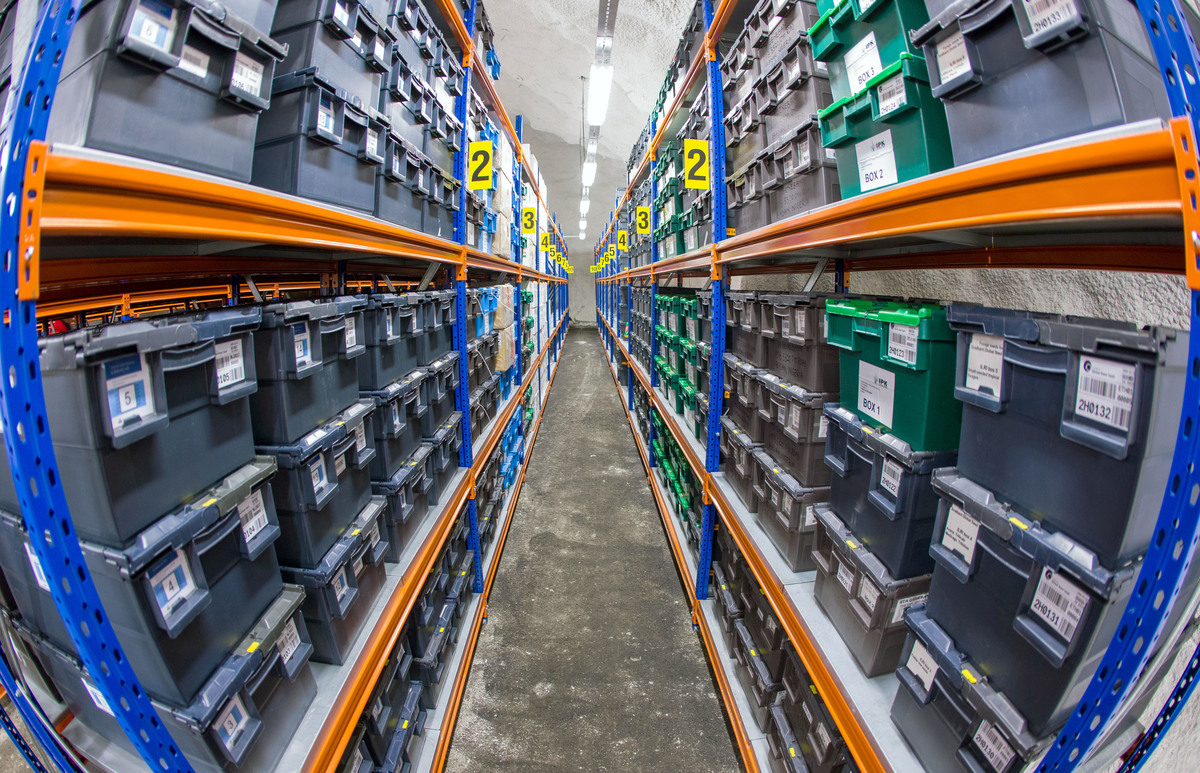 The Svalbard Global Seed Vault, in Norway, preserves plant seeds in cold storage. What about doing the same for helpful bacteria, ask researchers in a new paper.

Maria Gloria Dominguez-Bello had just moved to New York when Hurricane Sandy blew in from the Atlantic and buffeted the East Coast.

She heard that the labs at New York University, where she was working — and its freezer — were losing power. So she ran to the failing freezer, took the microbiota samples she'd gathered as a researcher in Puerto Rico over the past 14 years and stored them elsewhere.

Microbiota are the bacteria colonizing the human body — the gut, skin, mouth, and so on — that often help regulate your health. Researchers call them "beneficial germs."

Now she has an idea for how to protect those samples from disasters. She is part of a team that wants to build a freezer vault in the safest place possible and stock it with microbiota collected by scientists around the world — a kind of Noah's Ark for helpful bacteria.

On Thursday in Science, the team proposed a plan to collect and safeguard microbiota in one location.

"Immune systems are educated by bacteria," explains Dominguez-Bello, lead author of the proposal and a professor in Rutgers-New Brunswick's Department of Biochemistry and Microbiology and Department of Anthropology. The bacteria help the immune systems learn which microbes are a threat and which ones are healthy — and they may help our bodies ward off disease.

Having a diverse microbiota — a wide variety of these helpful bacteria — might be good for your overall health, some studies suggest. A lack of microbiota diversity has been associated with immune diseases like diabetes, asthma, allergies and more.

But modern life isn't kind to microbiota. As antibiotics become more and more common, as our diets change and as we cluster together in modern cities, our microbiota become less diverse, studies have found. So researchers want to stockpile — and study — the good germs from remote communities that have had limited contact with modern medicine.

The people in these communities have microbiota that are different and much more varied than the microbes found in urban communities. But as the people in remote places have more contact with the outside world, that diversity is ebbing away.

In her work, Dominguez-Bello says, "I'm trying to understand: What have we lost?"

That work may result in better probiotics – the microorganisms introduced into the body through supplements to help strengthen our immune system. One challenge is cajoling those good germs to stay in our modern-day guts.

That's why it's important to preserve the microbiota samples researchers have collected, Dominguez-Bello says.

There's precedent for the idea of a vault to protect important samples from catastrophic change. In Norway, the Svalbard Seed Bank guards rapidly disappearing plant biodiversity from natural and manmade disasters, keeping the seeds in cold storage.

The microbiota vault might also be housed in Norway, or perhaps in Switzerland, Dominguez-Bello suggests.

"The collection should be really isolated, in the coldest possible and the most autonomous [place] possible, so if a major disaster happens, the collection can survive," she says.

"We want a cold place in a stable country — it's very important that the country is politically neutral and stable."

The cold would mean you'd need less energy to keep the samples frozen, and if the vault begins failing for some reason, the natural cold would slow the thaw.

The backup collection would serve as a kind of bank; you can only withdraw what you've deposited. Individual researchers would send copies of their samples to have a backup at a safe location.

There's another benefit to such a facility. The collection could bring together scientists willing to share samples and collaborate.

Alexis Mosca, a pediatric gastroenterologist at the Robert Debré Hospital in Paris, calls the collection "a great and original idea."

Mosca, who was not associated with the proposal, has studied gut microbiota and the potential benefits of reintroducing diverse microbes back into the human body.

"Restoring a heathy microbiota may require seeding our microbiota with 'ancient' beneficial species," Mosca explains. "Ancient" species, which are closer to our ancestors' beneficial bacteria, could come from the remote communities the researchers are studying.

Right now, many of our probiotics are made with bacteria from cows and other animals. But the microbes found in cows are often different than those that take root in humans, Dominguez-Bello points out — so it's unknown how beneficial they are. She says more research needs to be done to figure out what works and why.

In the future, Dominguez-Bello says, probiotics will likely come from humans. People may start saving their own microbiota samples before a surgery, she says. After a course of antibiotics, they could reintroduce their helpful bacteria to keep their immune systems flourishing.

This already happens, to an extent, with fecal transplants for patients with life-threatening illnesses that can be fixed by adjusting their microbiota.

The next step for the bacterial ark, she says, will be creating guidelines for submitting samples — and maintaining them.

And then comes fundraising.

"We need money for facilities and to pay the salaries of people there and the transportation of samples and all that," she says.