Accessibility links
Once Enslaved By ISIS, Nadia Murad Is Co-Recipient Of Nobel Peace Prize : Goats and Soda Nadia Murad, who escaped ISIS captivity and now speaks out about sexual violence, was one of two recipients. She talked about the impact of the Nobel in an interview with NPR's Noel King. 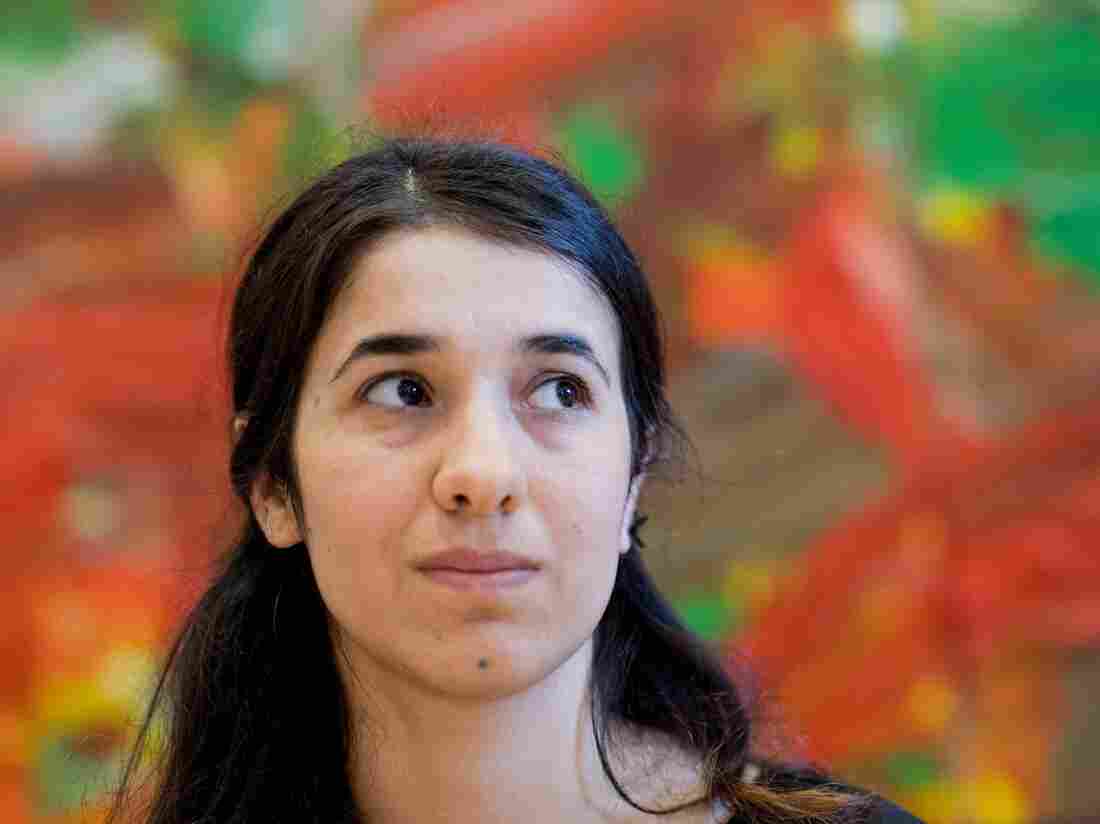 Nadia Murad, from the Yazidi community in Iraq, is the co-winner of this year's Nobel Peace Prize. She was enslaved for three months by ISIS and sexually assaulted. Now she speaks out for victims of sexual enslavement. Julian Stratenschulte /AFP/Getty Images hide caption 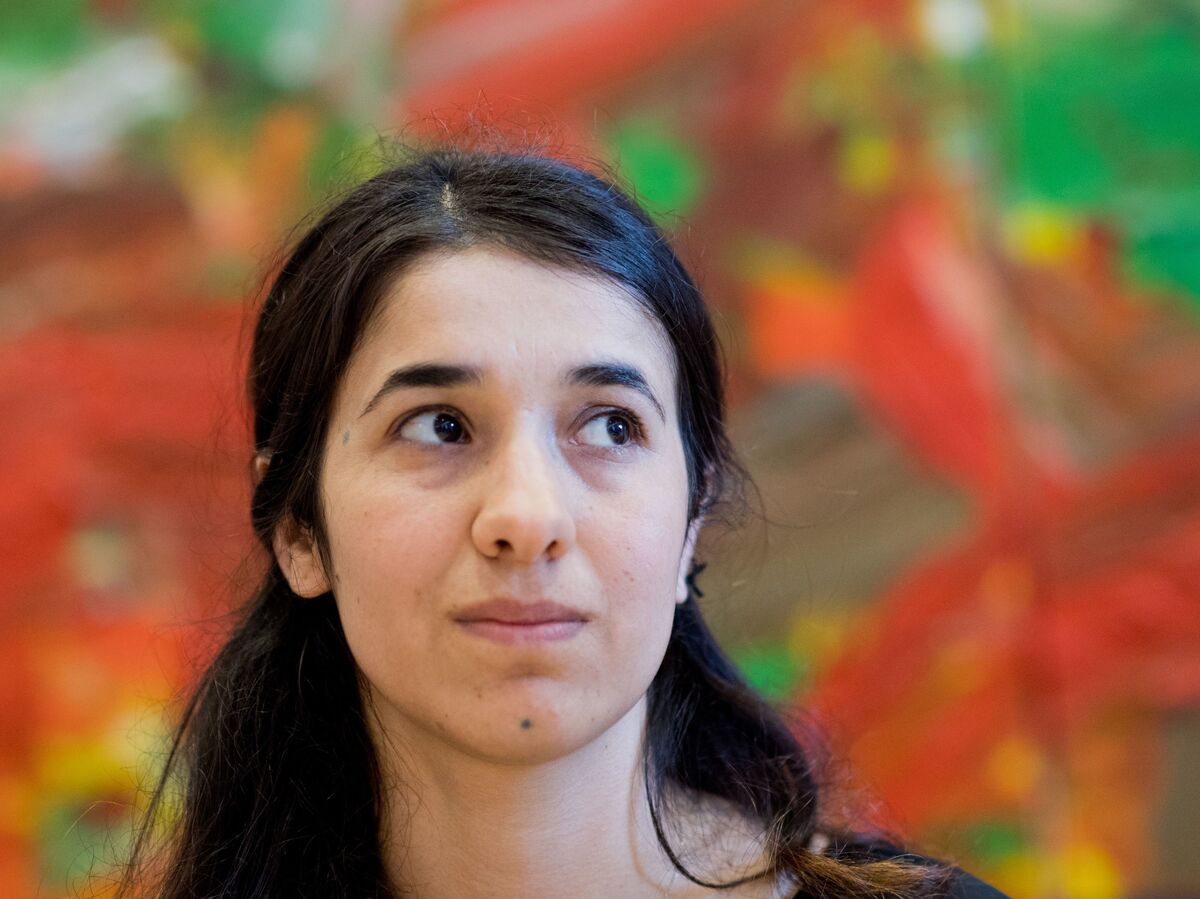 Nadia Murad, from the Yazidi community in Iraq, is the co-winner of this year's Nobel Peace Prize. She was enslaved for three months by ISIS and sexually assaulted. Now she speaks out for victims of sexual enslavement.

This month, Nadia Murad became the co-recipient of the Nobel Peace Prize, along with Dr. Denis Mukwege, a gynecologist from the Democratic Republic of the Congo who treats victims of rape.

The pair were named for their work to highlight and eliminate the use of sexual violence as a weapon of war. Murad, who had been captured and sexually enslaved for three months by ISIS members, was honored for refusing "to accept the social codes that require women to remain silent and ashamed of the abuses to which they have been subjected," the Nobel committee said. At age 25, she is the second-youngest peace prize recipient; Malala Yousafzai was the youngest at age 17.

On Wednesday, October 17. Murad spoke with Morning Edition's Noel King. We have updated a previously written profile to reflect her comments.

The announcement of the Nobel prize brought tears to Murad's eyes, she told NPR's King.

Nurad's mother is one of several family members who were killed by ISIS. The family is part of the Yazidi minority in northern Iraq.

Murad herself has her own harrowing story to tell. In August 2014, she was one of thousands of Yazidi captured by ISIS and forced into sexual slavery. Three months later, she escaped through a door that a captor left unlocked.

Murad has shared her painful story with international media outlets over and over to show the world what happened to Yazidis. She has become a voice for captive women and girls in the process.

Murad urges women who have faced sexual violence to reclaim their lives. "The hope of ISIS was to break the Yazidi community," she says. "But for survivors especially, going back to their lives and getting married and making a life and working, it's basically making sure ISIS did not succeed."

In 2016, she was named the U.N.'s first Goodwill Ambassador for the Dignity of Survivors of Human Trafficking.

"Nadia survived horrific crimes. I cried when I heard her story. But I didn't only cry out of sadness," he said. "I was also moved to tears because Nadia has so much strength, courage and dignity. She rightly calls for a world where all children live in peace."

Murad tells King that the Yazidi are a peaceful people — and that she wants to see justice done.

She labels the rape of women and the murder of men from her community as genocide — and says she wants these atrocities to be classified as war crimes. But she's uncertain this will happen.

"Sometimes I feel that my message has not been clearly heard .... Too much is going on in terms of women being victims. And it's not the first time and certainly it's not the last time. So I feel like this is not new to people ... people have become numb to this kind of news."

Yazidi women and girls who have escaped ISIS or are rescued face an array of problems, Pari Ibrahim, founder and executive director of the Free Yezidi Foundation, tells NPR. "A lot of the women have difficulty trying to build a new future. They don't have a boyfriend or get engaged; they are living in the past. It's not easy for them to switch back to the here and now and to live daily life."

Murad, who has tried to loosen shackles of the past, announced in August her plans to be married.

Her fiancé, Abid Shamdeen, is a former interpreter for the U.S. Army and a human rights activist. "Despite all the difficulties that we were going through, he was always there. He was supportive," Murad told NPR at the time.

Murad says their engagement shows Yazidi survivors that "it's possible to live their lives again and to not believe the propaganda of ISIS — that they will not be accepted back into the community."

But she says she is still getting used to her new way of life.

"It's still difficult for me to deal with all of this ... I want to create a family with my fiance and be able to live a simple life. And just be safe," she says.