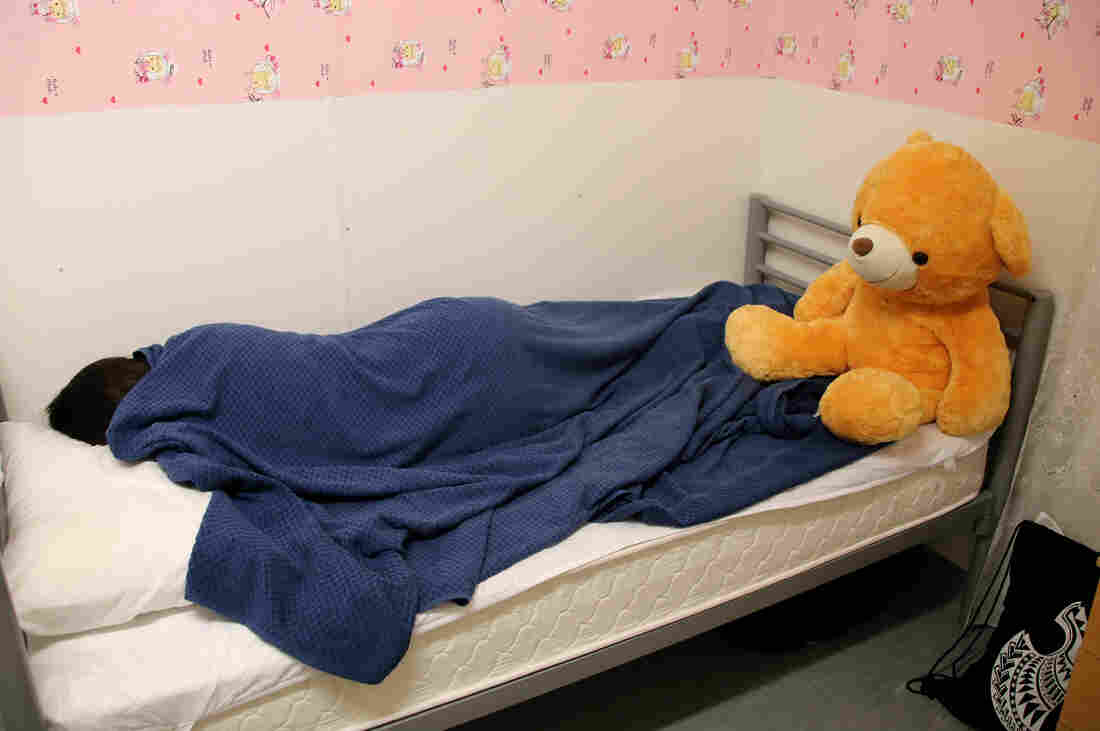 A 12-year-old Iranian refugee girl, who had tried to set herself on fire with petrol, rests in a bed in Nauru, where nearly 1,000 refugees and asylum seekers have been sent by the government of Australia. Mike Leyral/AFP/Getty Images hide caption 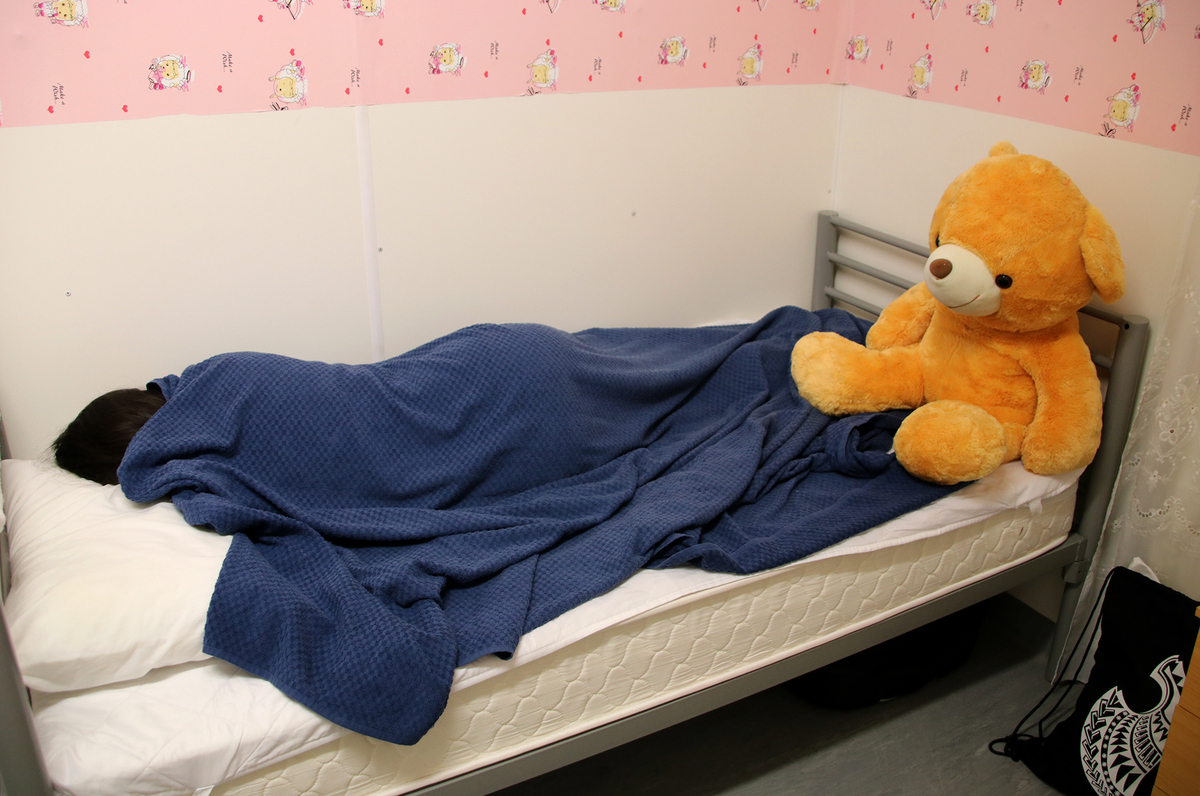 A 12-year-old Iranian refugee girl, who had tried to set herself on fire with petrol, rests in a bed in Nauru, where nearly 1,000 refugees and asylum seekers have been sent by the government of Australia.

The government of Nauru, a tiny island nation in the South Pacific, and the charity Doctors Without Borders are in a bitter dispute over mental health care for asylum seekers and refugees.

The controversy revolves around approximately 900 individuals sent to Nauru by the Australian government since 2013. They arrived in Australia by boat, coming from such countries as Iran, Somalia, Sri Lanka and Syria; the government sent them to Nauru and Papua New Guinea. Most of them have been there four years.

"Let's be very, very clear. They're trapped on a rock in the middle of the Pacific," Paul McPhun, MSF Australia's executive director, told NPR in a phone interview. These asylum seekers and refugees have no passports and few opportunities for education and work, he said. McPhun has also said there were instances of physical and sexual abuse among that population.

Eleven months ago, MSF (the acronym for Doctors Without Borders' French name) began providing free mental health care on Nauru. Despite MSF's efforts the mental health situation among asylum seekers and refugees on the island has reached a "critical level," said McPhun. At least 78 MSF patients on Nauru have had suicidal thoughts or attempted suicide since the group began offering treatment, he said.

The dispute surfaced on October 5 when the government of Nauru told MSF their care was "no longer required" and asked its team of seven health workers to cease providing psychological and psychiatric services within 24 hours.

At issue, according to the government, was the scope of MSF's work. On October 12, the government of Nauru issued a statement charging that MSF did not meet the commitment it had made to provide health services for the local population of some 13,000 Nauruans and instead tried to further its political advocacy agenda by focusing on refugees and asylum seekers.

MSF vehemently disagrees with the government's claims. In an email to NPR on October 12, MSF's humanitarian specialist on displacement, Aurelie Ponthieu, wrote, "Medecins Sans Frontieres' only agenda on Nauru was to provide the best medical and mental health care to Nauruans, asylum seekers and refugees on the island and alleviate their suffering. This was done in agreement with Nauruan authorities."

When MSF left the island on October 9, nearly 100 people were on its waiting list for mental health services.

"Make no mistake MSF is extremely concerned for the ongoing mental health for all of our patients on the island," McPhun said during an MSF press conference in Sydney on October 11. He was joined at the press conference by Christine Rufener, an American clinical psychologist who has worked with MSF in various locations, including Nauru, and Dr. Beth O'Connor, a MSF psychiatrist who worked in Nauru for the 11 months that services were offered.

At the press conference, the two providers described the mental health conditions they witnessed on the island.

According to O'Connor, when MSF arrived many of the refugees and asylum seekers were struggling with mental health issues and had not received mental health care for the prior nine to 10 months.

In Sweden, Hundreds Of Refugee Children Gave Up On Life

"We were seeing suicide attempts in children as young as 9 years old," O'Connor said.

Over the 11 months she was in Nauru, O'Connor noticed the mental health of the children she saw was deteriorating. Some children began to stay in their beds, no longer eating, drinking, or going to the bathroom on their own. When she tried to talk to children she had previously conversed with, they would not respond.

"They would just stare right through me. And seeing that level of deterioration in the children was really quite horrific," O'Connor said.

Asylum seekers and refugees on Nauru had lost all hope for a meaningful future, according to Rufener. Her voice quivering, she said, "I heard it in their words and I saw it in their eyes."

UNHCR, the U.N. refugee agency, corroborates MSF's assessment of the mental health of refugees and asylum seekers on Nauru.

"Our assessments, including that of consultant medical experts, is that the mental health situation has now reached crisis point," Catherine Stubberfield told NPR. She is the spokesperson for the UNHCR Regional Representation in Canberra, Australia.

MSF and UNHCR are adamantly calling for the immediate evacuation of all asylum seekers and refugees from Nauru as well as an end to Australia's policy of indefinite offshore detention.

McPhun says it's important to emphasize that if the asylum seekers and refugees in Nauru are removed but put in detention elsewhere, they will not be able to recover.

"In terms of the time frame in which people should now be moved, the situation could not be more urgent," Stubberfield said. "It has now reached a precipice."

The refugees and asylum seekers should be brought to Australia to prevent further tragedy and loss, Stubberfield told NPR. People who have sought Australia's protection remain the country's responsibility under international law, she said.

"Australia must be held accountable for this policy that it has established, financed and managed for more than five years," Stubberfield said.