Accessibility links
Girl Scout Wins Top Honor For Her Films On Child Brides And Trafficking : Goats and Soda Sakshi Satpathy, 16, babysat and walked dogs to finance her films on child marriage and trafficking. She's won the Girl Scout's top honor — and Amnesty International and CARE have screened her works. 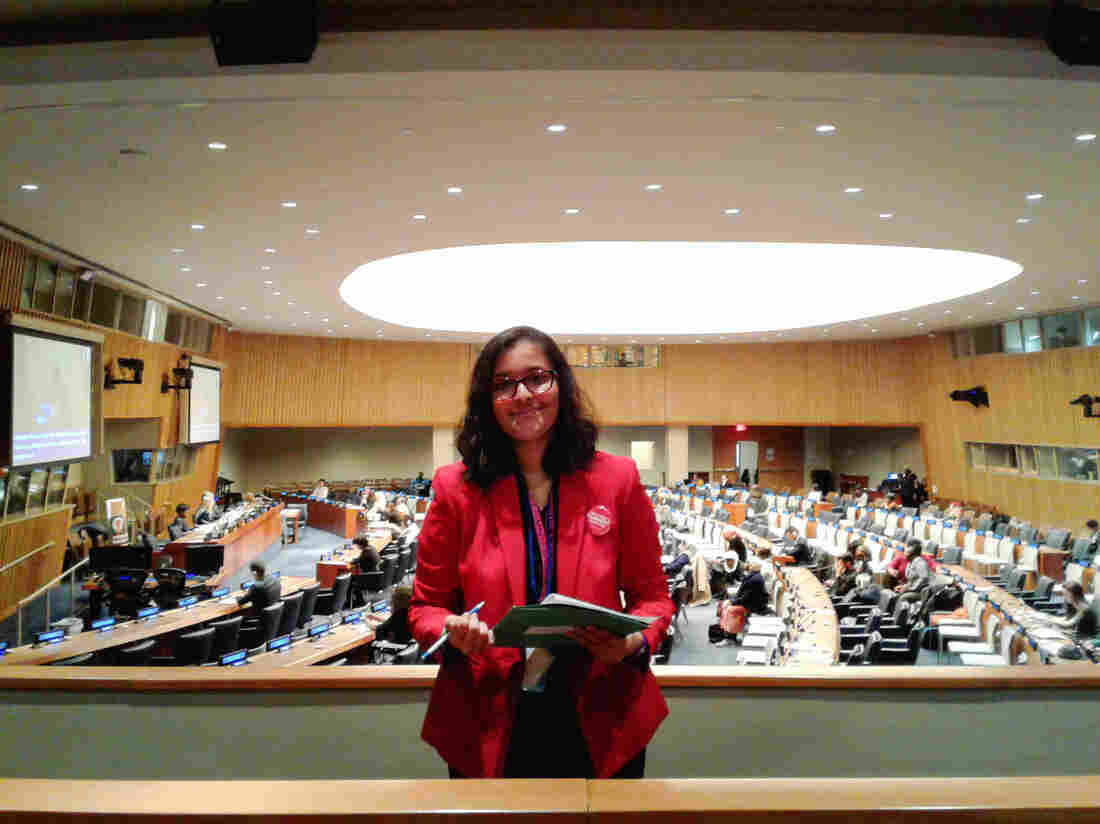 Sakshi Satpathy at the U.N.'s headquarters in March. On Thursday, she received an award from the Girl Scouts at the U.N. for her work to fight child marriage and human trafficking. Courtesy of Sakshi Satpathy hide caption 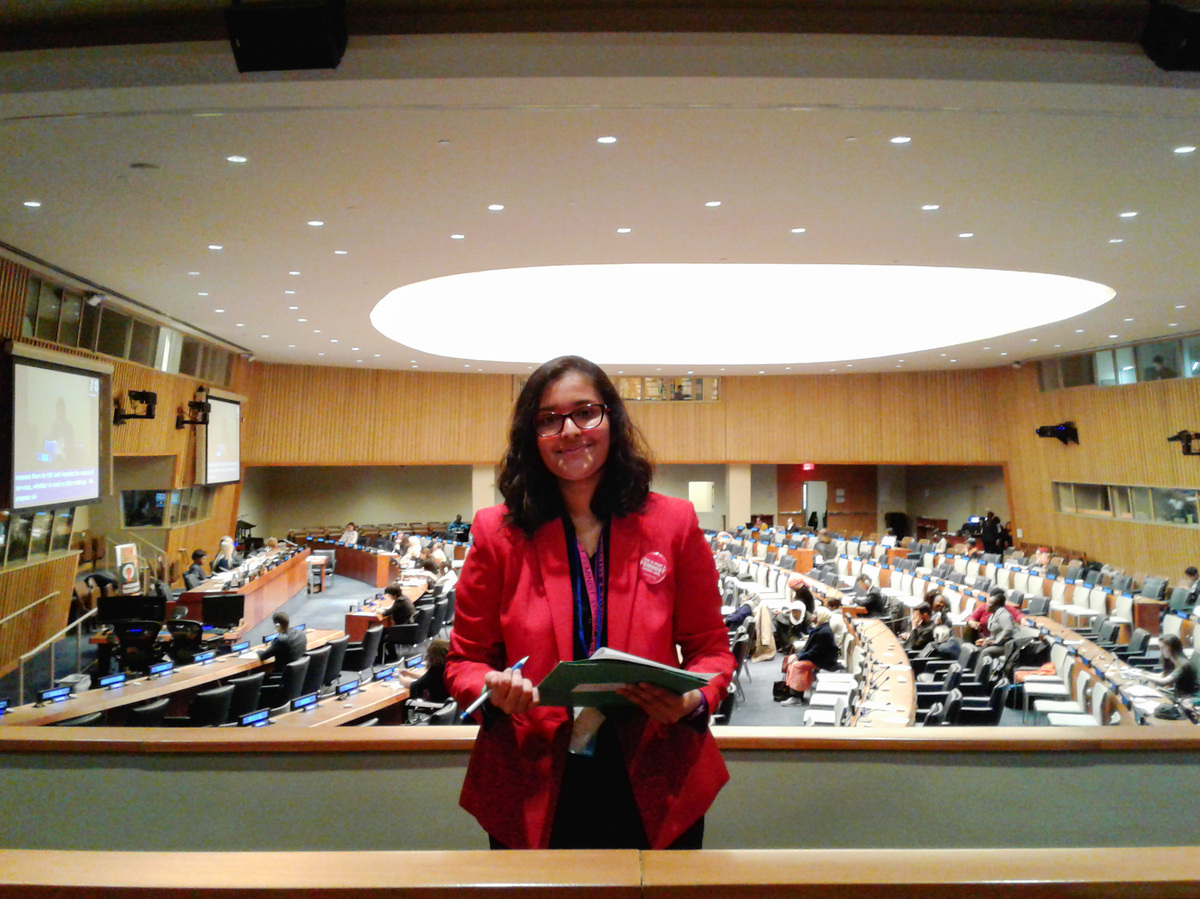 Sakshi Satpathy at the U.N.'s headquarters in March. On Thursday, she received an award from the Girl Scouts at the U.N. for her work to fight child marriage and human trafficking.

It was 4 p.m., and Sakshi Satpathy, the 16-year-old high school senior who had arrived in New York on a red-eye flight from San Francisco at 6 a.m., was finally eating lunch: a take-out chicken and arugula salad from Panera Bread.

Nonetheless poised and smiling in a bright yellow blouse, she responded to a reporter's question that her name, Sakshi, in Hindi means "witness."

That seemed apt since she has already spread awareness of human trafficking, child marriage and gender equality through screenings in 15 countries of her three documentary films, a training curriculum to help rehabilitate trafficked girls, not to mention a website and YouTube playlists of educational videos about these issues from various nonprofit groups.

These are the component parts that make up the initiative she calls Project GREET: Girl Rights: Engage, Empower, Train.

That was also why Satpathy was in New York. Girl Scouts of the USA recognized 10 of those who had earned its highest honor, the Gold Award, in a ceremony at the United Nations on October 11, the International Day of the Girl. The day highlights the challenges that girls face around the world — and celebrates the remarkable girls making a difference.

"Gold Award Girl Scouts demonstrate how girls are creating positive, sustainable change to improve their communities and the world," said Girl Scouts CEO Sylvia Acevedo in an official statement. "They are well on their way to becoming the business leaders, activists, scientists, entrepreneurs, policymakers and artists who will build our collective future."

Born in Bangalore, India, Satpathy moved with her family to northern California when she was 11 and currently attends a public high school there. We spoke to her at the Girl Scouts' headquarters in New York. This conversation has been edited for clarity and length.

Are you excited to be going to the U.N.? Or should that be going back to the U.N., since you were were part of a panel there earlier this year?

It's inspirational just being at the U.N. headquarters, especially since I'm also in Model U.N. at school. I was also here in March as a student speaker for Girls Learn International [for an annual women's rights conference organized by U.N. Women]. I met trafficking survivors and talked about child marriage and trafficking prevention with ambassadors from countries and representatives from CARE, [a global aid agency] and other NGOs (non-governmental organizations).

What drew you to these issues?

I was always passionate about women's rights.I would read news reports about trafficking and child marriage, and they always left me with a bad feeling.

When I was in ninth grade, I joined student groups of Amnesty International and Girls Learning International and began learning and reading more about gender-based violence, child marriage and human trafficking.

I was really surprised by what I learned. I had believed that all parents who would let their daughters marry so early must be bad people. But I had not taken into account external and root causes, such as terrible poverty and not being able to afford to feed another mouth. I also did not realize that human trafficking could happen not just across other borders but within one's own community, even in the U.S., and that traffickers can trap [victims] by taking their passports or holding other blackmail over them.

How did your project take shape, and how does the Girl Scouts fit in?

If you look around, these issues are happening everywhere, but there is a lack of awareness that allows them to continue. So I decided to create a project that would educate people.

I had been a member of the Girl Scouts since I was in seventh grade and knew about the Gold Award process. It makes you really do research and make a workable plan, and there are mentors and volunteers to give you feedback.

The first time I sent in my paperwork, in the second semester of my freshman year, the feedback I got was I needed to think the project through more, which took another three months. So I really started work on the project in the first semester of my sophomore year.

Did you have to learn new skills for the project?

I had to learn basically everything: how to use the camera equipment and edit videos, how to interview and ask meaningful questions of busy adults, how to write a script and a curriculum.

I also had to raise $1,000 to defray the costs of the equipment rental and to set up the website and social media platforms. I did dog-walking, babysitting and I applied for and received a $300 community service grant.

Who did you interview for the films?

I first spoke to several victims, who did not want to share their stories for personal reasons, so after that I mostly interviewed social workers, lawyers, activists and teachers. One taught in Africa, in an area very prone to trafficking, another came from an area where child marriage and female genital mutilation were prevalent.

I started by emailing and networking with teachers in different countries who I learned about from Amnesty International and Girls Learn International. I also attended conferences in my area [on these subjects] and continued to find new and additional people to interview.

Some of these researchers and activists also became your team at Project GREET.

Yes. I consulted with them to get key insight on [the topics]. I also used their help in distributing my films, curriculum, website and playlist.

Who is screening the films and using the curriculum?

Through my networking I developed partnerships with 35 organizations, and [since August 2017] the films have been screened in 59 locations in 15 different countries. Seeing and hearing about how positively they are received gives me hope that people are paying attention.

And the curriculum to help rehabilitate girls who have been the victims of trafficking?

It is being implemented in chapters of Amnesty International in Burkina Faso and in Brazil, and it is being considered by other organizations.

Have you thought about what you might major in for college?

I haven't gotten to that point yet, but whatever profession I pursue I will keep advocating against child marriage and human trafficking.