Accessibility links
#MeToo Movement In India Prompts Government Official To Resign — Even Though He Denies Accusations : Goats and Soda A year after sexual assault allegations against Harvey Weinstein catapulted #MeToo into a national movement in the U.S., women in India are using Facebook and Twitter to tell their stories. 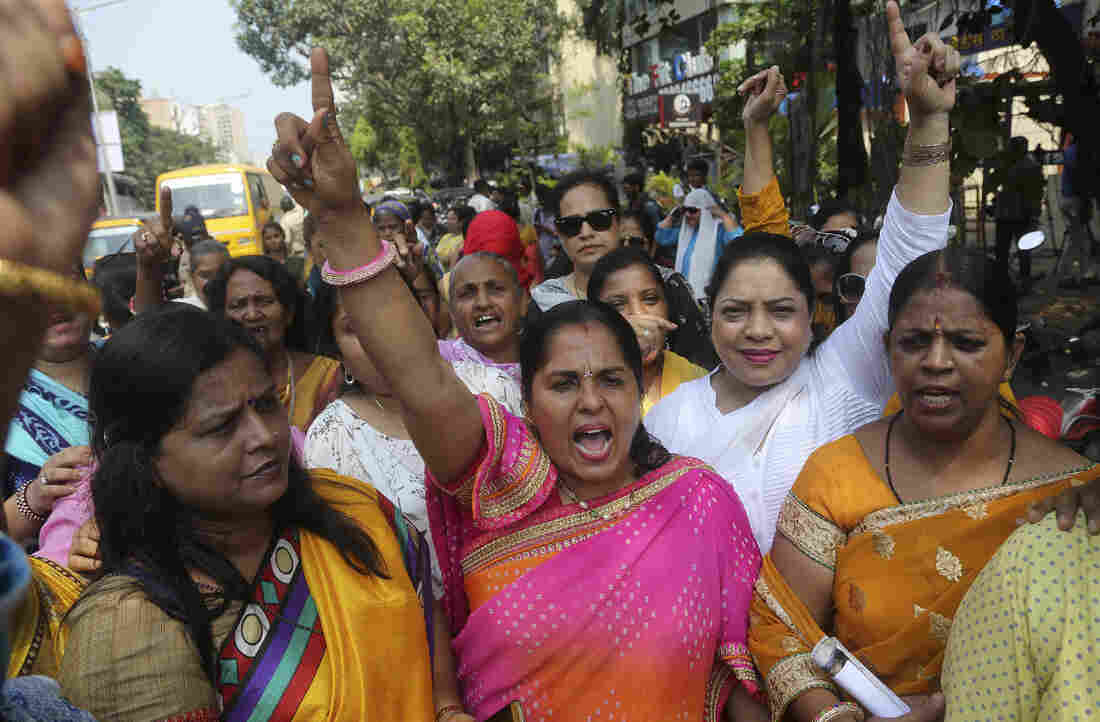 Activists protest in Mumbai to support Bollywood actress Tanushree Dutta, who has spoken out about an alleged case of sexual harassment. Women in India are naming and shaming their abusers on social media. Rafiq Maqbool/AP hide caption 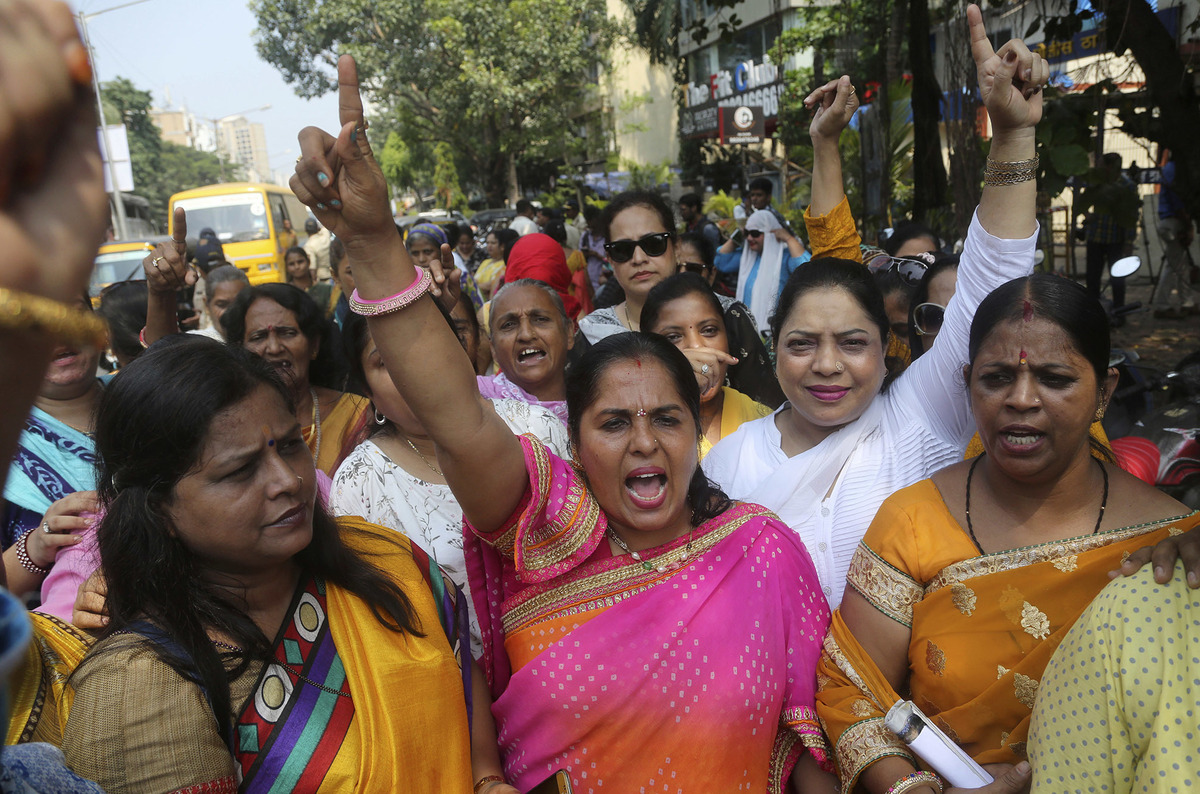 Activists protest in Mumbai to support Bollywood actress Tanushree Dutta, who has spoken out about an alleged case of sexual harassment. Women in India are naming and shaming their abusers on social media.

An Indian government minister has resigned after more than a dozen women accused him of sexual harassment. Veteran editor and politician M.J. Akbar is the most high-profile figure affected since women in India began naming and shaming their abusers on social media earlier this month.

Akbar denies the allegations of sexual harassment. In a statement he said: "I deem it appropriate to step down from office and challenge false accusations levied against me." On Monday he had filed a defamation suit against one of his accusers.

Harrowing survivor accounts and screenshots of lewd messages started flooding Twitter and Facebook in India a little more than a week ago. In addition to Akbar, the dozens of men accused of sexual misconduct include senior journalists, Bollywood actors and high-ranking executives.

Some are calling it India's #MeToo movement.

It all started in late September, when Bollywood actress Tanushree Dutta spoke to Indian media about how she was ignored when she claimed sexual harassment back in 2008. She accused Nana Patekar, a veteran Bollywood actor, of touching her inappropriately on the set of a movie they were shooting. Dutta is now pursuing legal action against Patekar, who has denied the allegations.

After A Sexual Attack On An Actress, The Women Of 'Mollywood' Fight Back

The incident triggered multiple women to come out with their own sexual harassment stories.

Bengaluru-based writer and journalist Sandhya Menon was among the first. Within two hours of posting her workplace sexual harassment account, Menon's inbox started buzzing with messages from other women who wanted to share their own stories. Menon says she received around 120 direct messages through social media in the week following.

Menon has been posting stories of women online on their behalf. While the survivors may be anonymous to the public, Menon says, she makes sure that they reveal their identity to her privately.

Bollywood actress Dutta says that when she spoke out 10 years ago, she was slut-shamed. "But now, somehow, people are taking notice," she says.

Dutta, who was 24 at the time of the incident, blames Patekar for thugs who intimidated her while she was leaving the film set. Video footage shows a mob surrounding a car with Dutta and her parents inside, visibly shaken.

"I was completely blank and too scared to even feel fear," Dutta says. "I was wondering to myself if there was a hospital nearby in case we get injured."

After the 2008 incident, Dutta quit Bollywood and moved to the U.S. — where she has been closely following the #MeToo movement in Hollywood.

"All the big names — actors, producers, directors, studios — that had perhaps been complicit in silence started moving away [from those accused]. That is the kind of thing that needs to happen in India," she says.

Some in India say Brett Kavanaugh's confirmation hearing inspired some women in India to come forward.

The current #MeToo movement "is not something that has spontaneously combusted. [It] has been happening consistently for the last several years," she says.

In 2013, India enacted new guidelines against sexual harassment in the workplace.

One of the strongest reactions to the #MeToo movement in Bollywood came from Akshay Kumar, one of India's highest-paid actors, who proposed cancelling the shooting of a movie whose director was accused. "I will not work with any proven offenders," Kumar said in a statement posted on Twitter.

India's Prime Minister Narendra Modi has yet to comment publicly on the allegations against Akbar or the current #MeToo movement in India. Priyanka Chaturvedi, a spokesperson for the opposition party, the Indian National Congress, tweeted that Akbar's resignation is "a vindication of the power of truth."

The #MeToo movement also has hit India's largest automobile company. Suresh Rangarajan, head of corporate communications at Tata Motors, was accused of giving an unsolicited shoulder massage to a female coworker and sending inappropriate texts. He has been asked to go on leave, the company tweeted.

As the number of accusations against prominent men increase, critics are asking why women are going for a "media trial" instead of following due process.

That's because enforcement of the recent anti-harassment laws has lagged, according to a report by Human Rights Watch.

In 2008, when Menon had complained to her employers at The Bangalore Mirror about workplace sexual harassment, she says they bullied her colleagues into isolating her, so she was rarely assigned stories.

"We don't trust our employers to give us a fair hearing," Menon says.

Several organizations including the Producers Guild of India, the Editors Guild of India and the National Commission for Women (NCW) have come out in support of the women calling out their abusers. The NCW urged the victims to file written complaints against their abusers, stating that "the commission is committed to facilitate and render all possible help to all women who have come forward and see their cases to a logical conclusion."

The Producers Guild of India says it recognizes an urgent need for robust grievance redressal in cases of sexual harassment. "We are instituting a committee within the Guild to lead this effort," they said in a statement.

And while the current social media-driven movement might largely be restricted to urban circles, it does not mean the movement doesn't exist in India's small towns and rural areas, says Vrinda Grover, a lawyer and human-rights activist.

"The resistance against sexual harassment in small towns may not follow the MeToo hashtag, but it is certainly there," she says.

In fact, the current law on sexual harassment in the workplace came from a Supreme Court case involving a woman from rural Rajasthan who was gang-raped while doing her job.

This story mistakenly stated that the #MeToo movement started a year ago. In fact, it was started in 2006, by activist Tarana Burke. It took off after allegations of sexual misconduct against movie producer Harvey Weinstein were reported in The New York Times and The New Yorker in October 2017. Additionally, this story misspelled Urvashi Butalia's last name as Bhutalia.