Accessibility links
Why A Researcher Rolled Cigarettes Of Dried Rhino Dung And Put Them In A Machine That Smoked Them : Goats and Soda Millions of people burn animal dung for heating and cooking. To find out if the smoke can cause lung issues, researcher Claire McCarthy used some unorthodox methods.

They Call Her 'Queen Of Dung' — And She Doesn't Mind

They Call Her 'Queen Of Dung' — And She Doesn't Mind 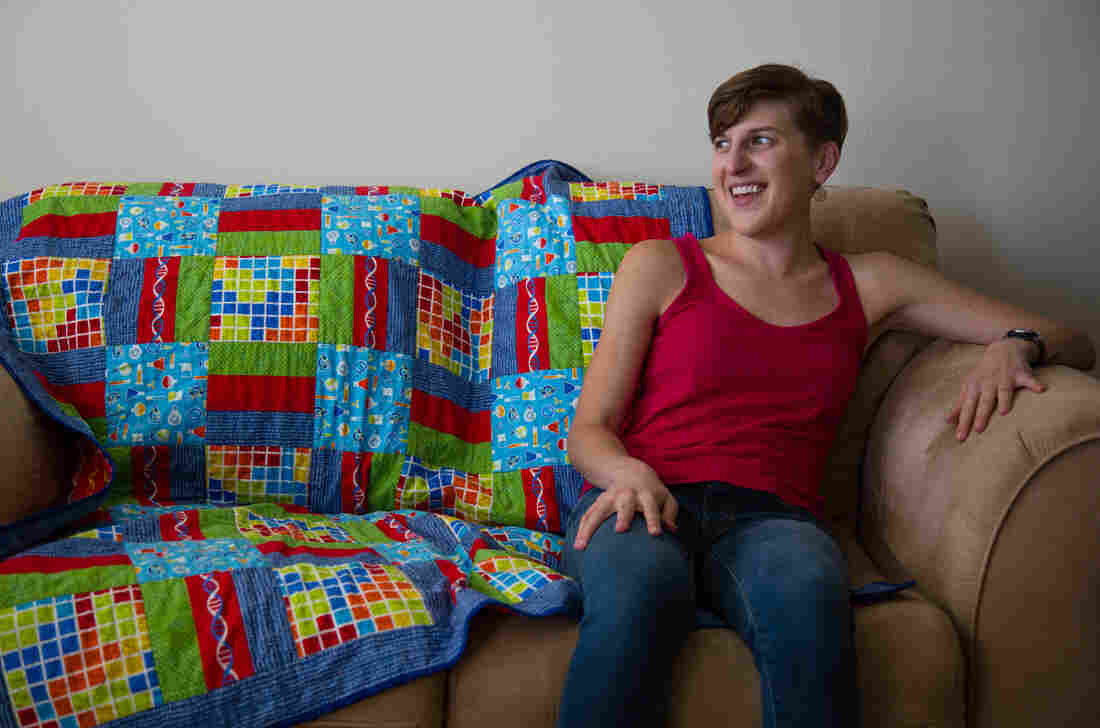 Researcher Claire McCarthy, also known as the "queen of dung," sits on a blanket with images of DNA, test tubes and beakers. Heather Kim/NPR hide caption 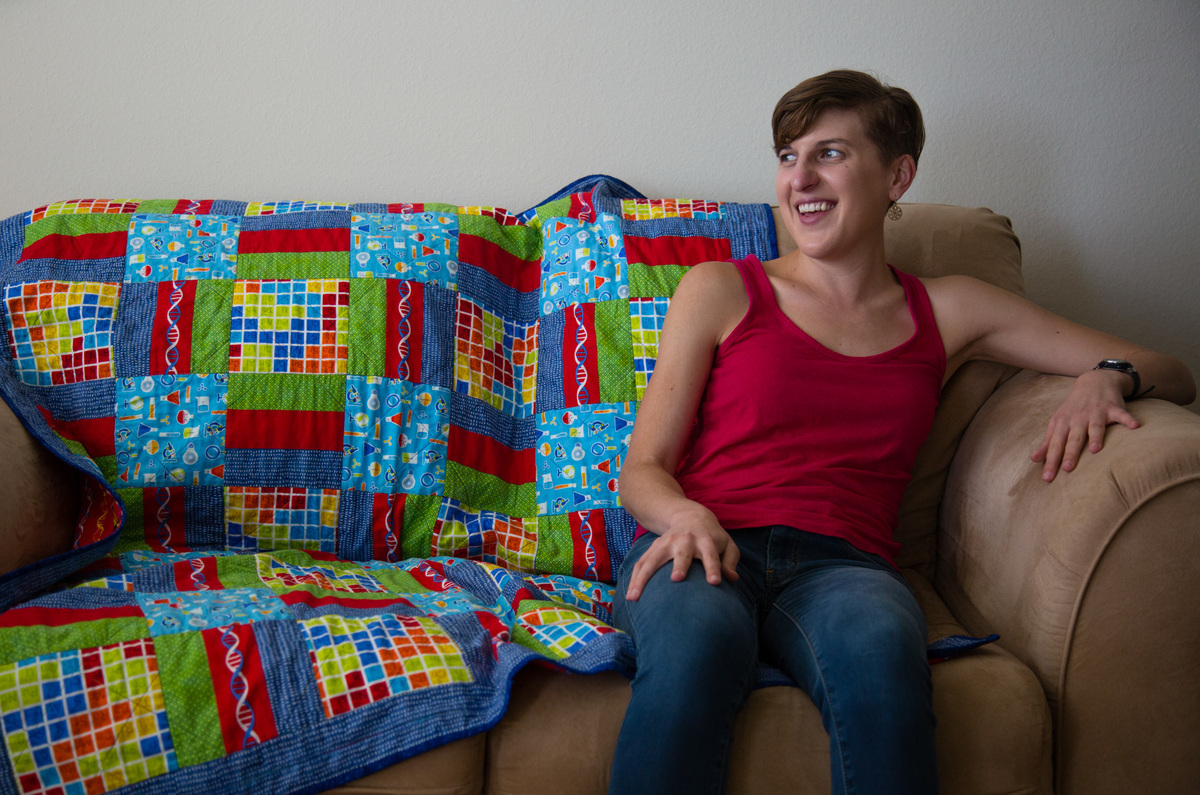 Researcher Claire McCarthy, also known as the "queen of dung," sits on a blanket with images of DNA, test tubes and beakers.

Early one morning in the spring of 2017, Claire McCarthy started her day as many don't: rolling dried rhinoceros dung into cigarettes and packing them into a machine that smoked them.

Although it might seem bizarre, McCarthy's purpose was serious: She wanted to know what happens when people breathe in dung smoke.

Dung smoke is no joke. Animal dung is used by millions globally for heating and cooking.

It's a dangerous practice. Burning biomass fuels (including animal dung as well as wood, charcoal, and plant matter) generates indoor air pollution, which caused 4 million deaths worldwide in 2012 according to the World Health Organization. Like cigarette smoke, biomass smoke has been linked to increased risk of lung diseases, such as chronic obstructive pulmonary disorder (COPD), lung cancer and respiratory infection.

During her testing, Claire McCarthy kept her samples of animal dung in the fridge. Shannon Loelius for NPR hide caption 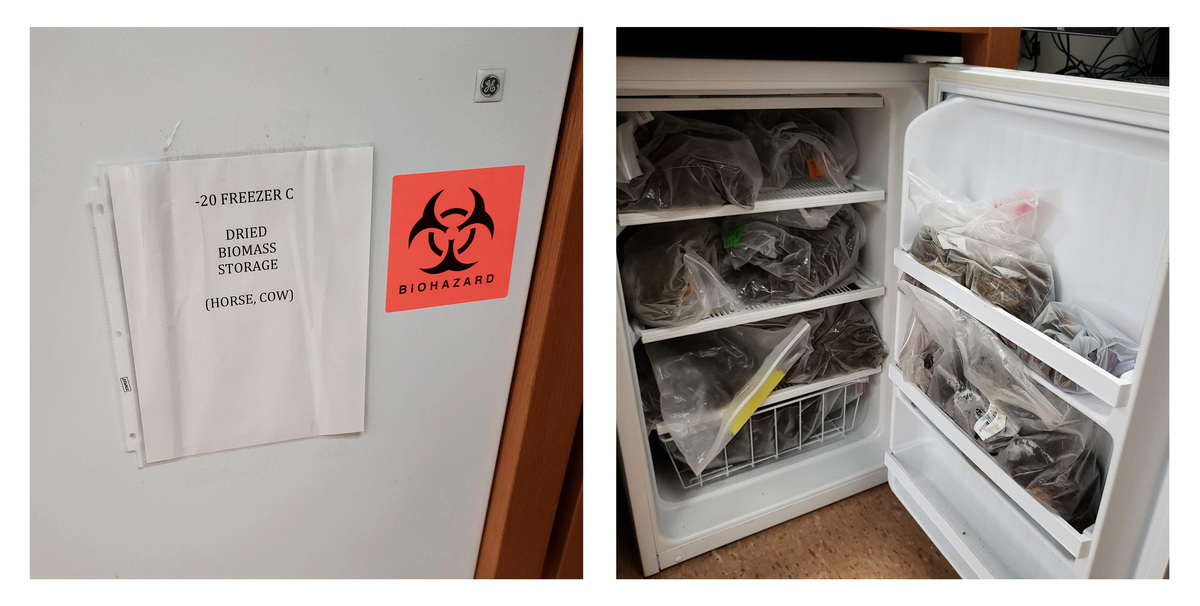 During her testing, Claire McCarthy kept her samples of animal dung in the fridge.

But people from low- and medium-income nations often cannot afford cleaner fuels and must rely on biomass fuels to heat their homes and cook their meals. While epidemiological studies have linked biomass smoke exposure to increased risk for lung disease, exactly how biomass smoke contributes to lung disease is unknown.

That's where researchers like McCarthy come in. McCarthy wanted to know how dung smoke affected airway cells, which in their normal position within the human lung are the first cells to come into contact with biomass smoke. She suspected that dung smoke induced an inflammatory response in airway cells, which could be involved in the development of COPD.

To answer this question, McCarthy has used some unorthodox methods.

But first, she had to figure out how to prepare dung to be burned.

When used for fuel for cooking or heating, dung is normally left to dry in the sun for days. For many reasons, this is not practical for research purposes. So, when the buckets and garbage bags full of dung arrived, McCarthy would lug them to the lab and place the dung in glass dishes to be baked overnight in an incubator. Of course, McCarthy developed this method from scratch and even tested to make sure the smoke generated from sun-dried dung was similar to lab-baked dung. (It was.)

To pack this freshly-baked dung into cigarettes, it first needs to be broken up. Enter the food-processor.

"I tested different blades," said McCarthy. "I also tested the dung-piece size, finer or coarser, to see what worked in the dung cigarettes."

In the end she used a mixture of fine-to-medium coarseness. The finer particles looked like ground coffee and the coarser ones looked more like tobacco in a traditional cigarette.

After chopping the dung up in the food processor, McCarthy rolled the dried dung into cigarettes and placed them in the cigarette smoking machine. As the cigarettes burned, the machine "inhaled" the dung smoke, pumping it through a tube and into a plastic box containing cells grown from human lung tissue.

In the box a machine diluted the smoke with fresh air so that cells would only come in contact with a pre-determined level of smoke particles that imitates the conditions the cells would experience if they were inside the lungs of a person cooking over a dung fire.

After developing this system, McCarthy first examined the effects of biomass smoke from horse dung (kindly donated by a local farmer) on human airway cells. She found the smoke caused an inflammatory reaction. Soon after contacting the smoke, the airway cells released molecules that recruit white blood cells.

Normally, airway cells produce these molecules to clear harmful bacteria or viruses from the human body. In this case, however, there are no bacteria or viruses, and the inflammation causes collateral damage to the lungs that will over time result in lung diseases.

People who use dung for fuel also have elevated levels of these molecules in their blood and sputum.

Overall, McCarthy's research provides evidence that human airway cells are affected by dung smoke. But horse dung is used only in certain parts of the world, so McCarthy was not sure if her findings could be applied to dung-smoke in general. To address this issue, she decided to test the effects of different animal-dung smoke on airway cells.

But how to amass a diversity of dung?

McCarthy contacted a veterinarian at the University of Rochester, who then contacted the local zoo. The zoo donated dung from white rhinos, elephants and goats, while area farms donated cow and horse dung.

McCarthy also bought Indian cow dung from — where else? — the internet (she found a company that specializes in cow dung distribution for use in a Hindu fire ritual).

McCarthy found that regardless of the animal source (Indian cow, U.S. cow, elephant, horse, goat, or rhino), the lung cells had a similar inflammatory response to the dung smoke.

The type of animal dung does not affect the magnitude of inflammatory response, indicating that burning animal dung is equally dangerous regardless of the animal. This could mean that research done in regions where goat dung is used could translate to regions where horse dung is primarily used.

Additionally, because people exposed to biomass smoke have increased risk for respiratory infections, McCarthy tested to see if dung smoke affects the antiviral response of the airway cells. Normally, when cells are infected with a virus they produce molecules called interferons that help defend against infection. But in her research, human airway cells that came into contact with dung smoke did not make these molecules when challenged with a viral mimetic (something that looks like a virus to cells).

McCarthy began to study if mice exposed to dung smoke had similar responses before graduating with her Ph.D. and has now passed the baton to the next student.

There is a lot more work to be done to determine exactly how biomass smoke contributes to increased risk of lung diseases.

In the meantime, McCarthy's work has led to an additional reward.

"I was at a conference and someone came up to me and said 'Oh, you're the Queen of Dung,' so at least I'm known for something!"

Shannon Loelius is a Ph.D. Candidate at the University of Rochester.