Accessibility links
Pulitzer Prize Winner Lynsey Addario Talks About The Remarkable Photos In Her New Book : Goats and Soda The award-winning photographer tells the stories behind the profoundly moving images in her new book, Of Love & War — and confesses that she still gets nervous before a new assignment. 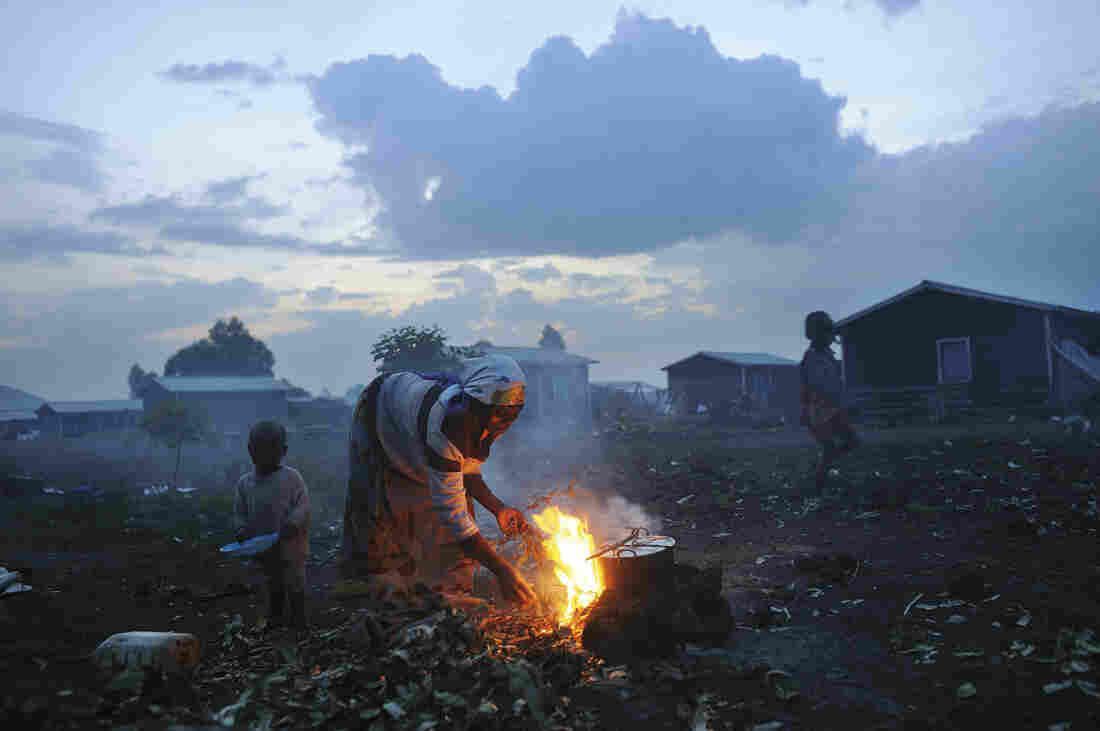 A Congolese woman displaced because of fighting cooks in the evening at Kibati camp in Goma, in eastern Congo. November 26, 2008 Lynsey Addario hide caption

Even after winning the 2009 Pulitzer Prize for International Reporting and being named a MacArthur Fellow, photojournalist Lynsey Addario still gets nervous when she takes on a new assignment.

Addario has just released a new book, Of Love & War. It features over 200 of her photographs, focusing on women in conflict zones from her coverage of wars and humanitarian crises over the past two decades. 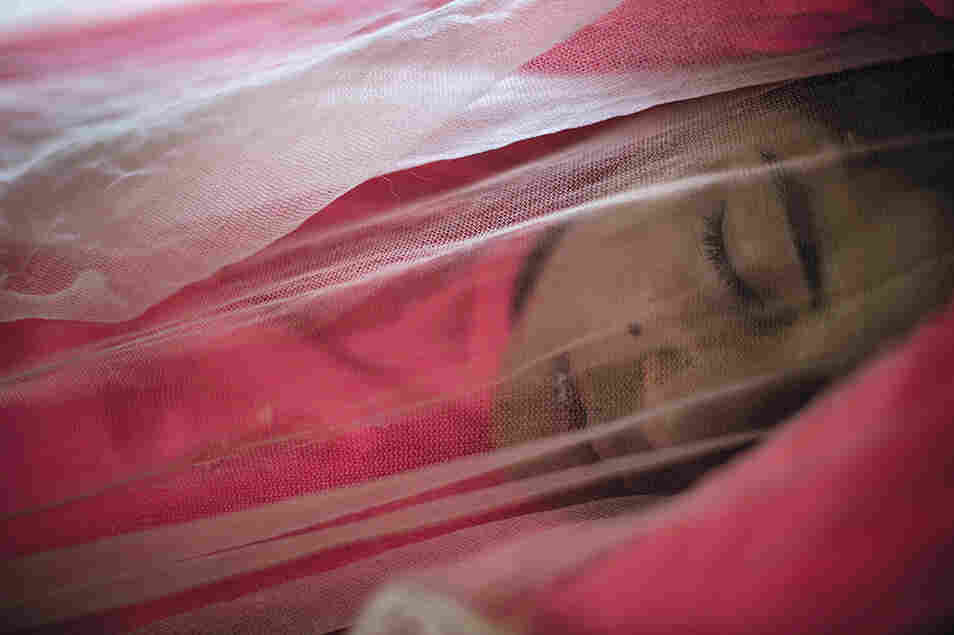 Hana naps under a mosquito net in her tent in an informal settlement for Syrian refugees in Lebanon, where she lives with her family. She had spent a long morning picking cucumbers with other refugees in the Bekaa Valley. August 2015 Lynsey Addario hide caption 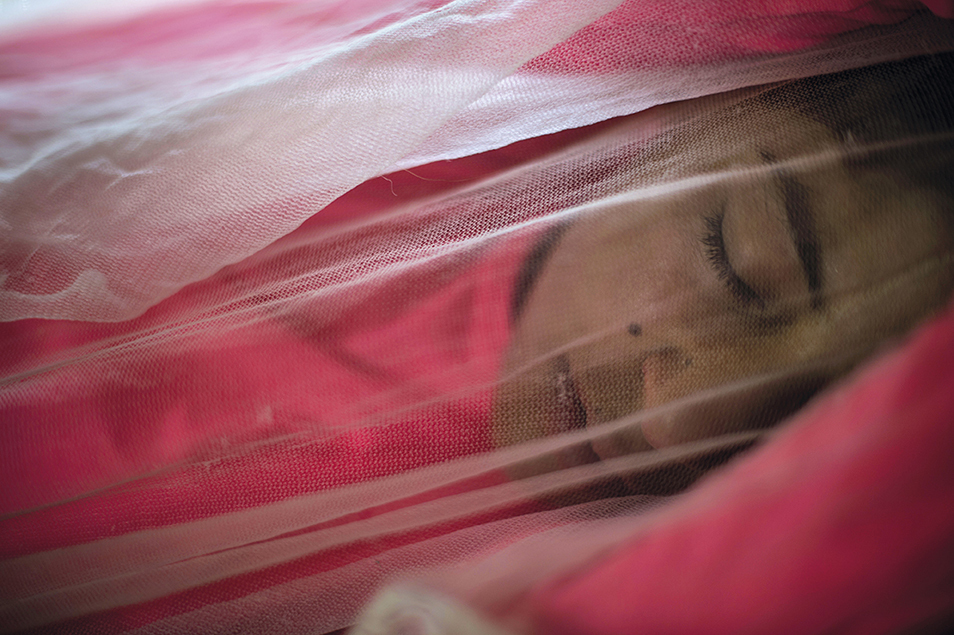 Hana naps under a mosquito net in her tent in an informal settlement for Syrian refugees in Lebanon, where she lives with her family. She had spent a long morning picking cucumbers with other refugees in the Bekaa Valley. August 2015

She told Kelly that she has learned a lot since she first started photographing.

"I wasn't as adept with the camera [then]. I didn't understand how to read light and to anticipate shots the way I do now. Now, I can prepare my cameras, get set up, make sure the right lens is on, so that if I have the opportunity to take a picture, I can grab it very quickly and put my camera away," she says.

She also now understands that taking powerful photographs requires knowing how to connect with people. 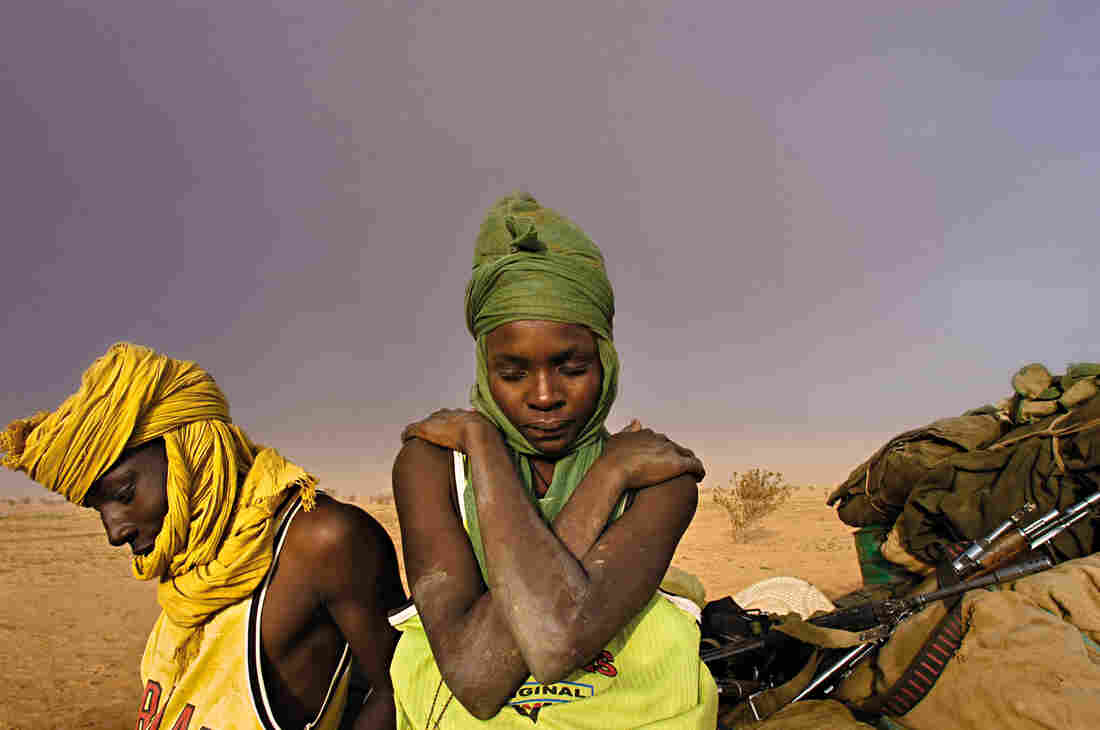 Soldiers with the Sudanese People's Liberation Army sit by their truck, waiting for it to be repaired, as a sandstorm approaches in Darfur. August 2004 Lynsey Addario hide caption

"[Photojournalism] is about reading human beings," she says.

Addario has shared her images with the world in publications like The New York Times, National Geographic and Time Magazine.

Here are excerpts from Addario's interview with Mary Louise Kelly, edited for length and clarity.

You capture women in incredibly candid, vulnerable moments. What's your etiquette for photographs like that? Do you always get permission before you raise your camera?

Always. Before I take any pictures, I introduce myself. I don't just walk in there like I have the right to take their picture. And a lot of women say no, and that's totally their right. A lot of women say, "I completely understand" and "Thank you for being a journalist" and "We hope this will help people."

You're making me think of a photograph you took of a woman named Ayak to show her belly, her pregnancy, without clothes. She was raped during war in South Sudan, and by the time you met her she was very pregnant as a result of that rape.

Yeah, before I even approached her with what I envisioned, I went to Kimberly who was the woman who had rescued [Ayak] and given her the safe house and said "Does this seem insensitive? How do you feel about this? Is this something that would be rude to ask?" She said, "No, absolutely not. Let's take this to her and see how she feels." And so we went and talked her through it, and before I even finished my sentence she had taken her dress off. She completely understood. 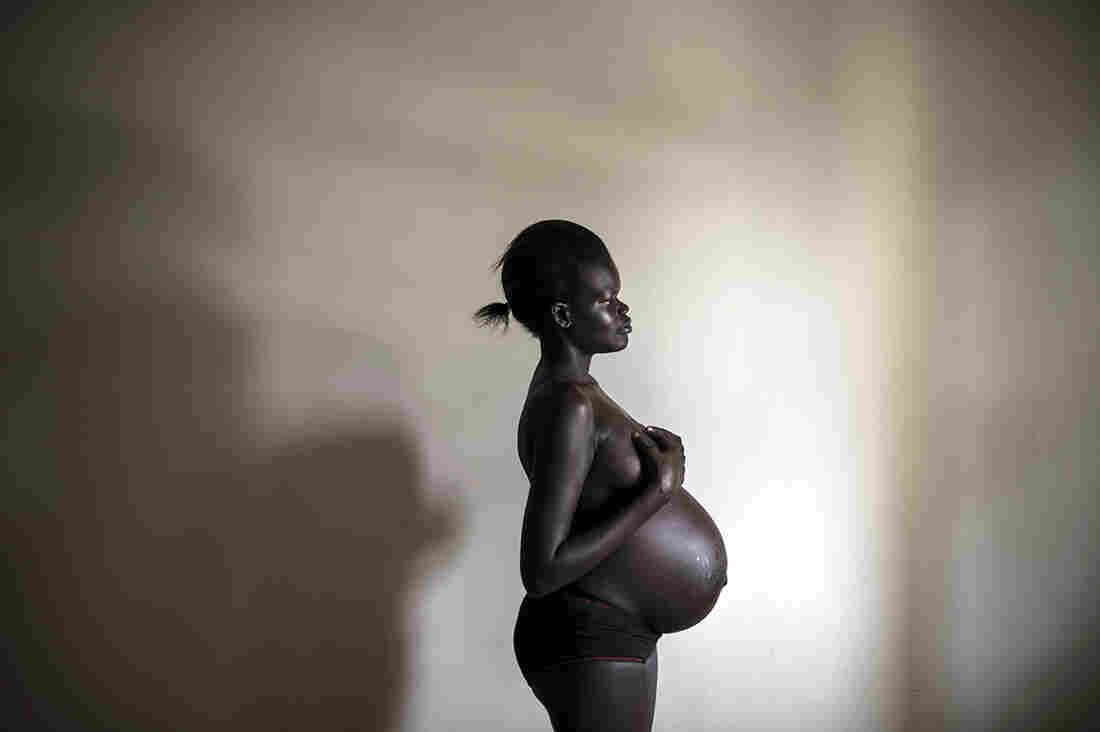 Ayak became pregnant after being raped during a period of heavy fighting across South Sudan. Lynsey Addario hide caption

As a woman, I haven't been raped, but I have been assaulted in Libya. I was groped repeatedly, and I made a decision to talk about that very openly because I think as a survivor, it's important to try to strip away the stigma. Different women feel comfortable revealing different things about themselves.

With Ayak, it was something she wanted to do. She wanted to show what had happened to her – it was part of her therapy. I think it's very important for me as a photographer to not make those rules for people. Everyone has the right to decide how they want to portray themselves.

I want to let you tell me the story of Bibi Aisha. This is a woman you met in Afghanistan at the Kabul shelter run by Women for Afghan Women. 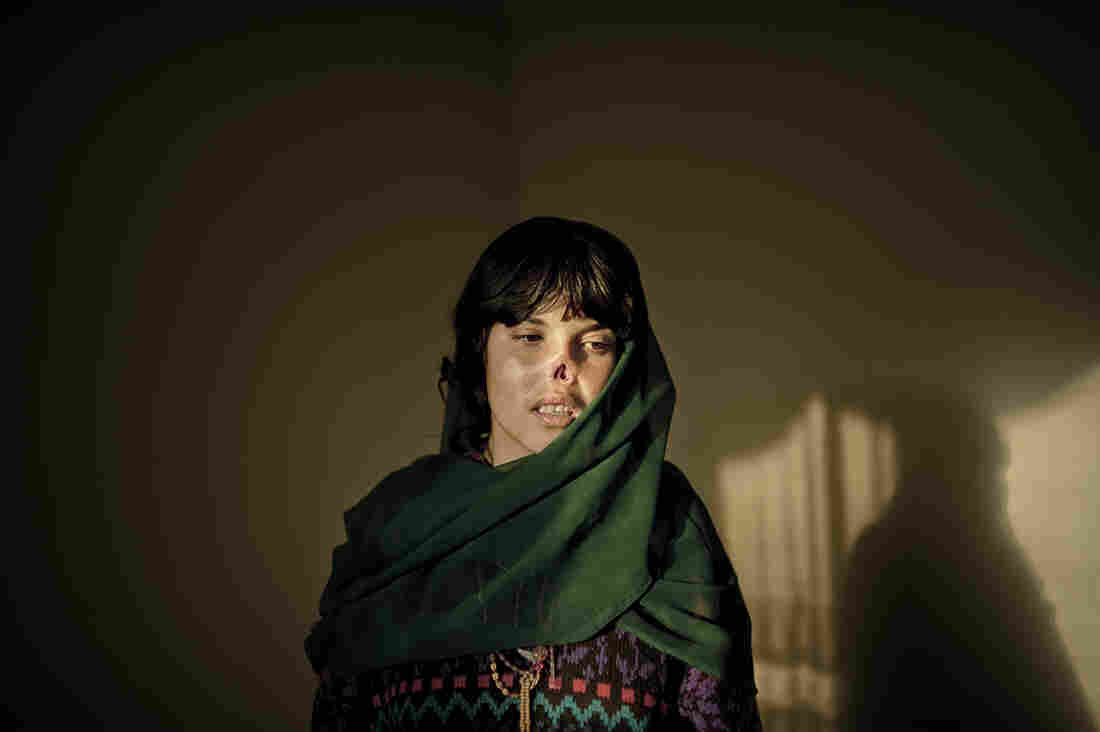 Bibi Aisha, whose husband cut off her nose because she had left their home to seek help. This photo was on the cover of Time magazine. November 2009 Lynsey Addario hide caption

Bibi Aisha is the woman that was on the cover of Time that elicited this massive response from the public because she had her nose cut off by her husband. The story that she told me was that she was beaten repeatedly. She was married at a very young age, I think it was about 12 years old, to a member of the Taliban. He was incredibly conservative, and he beat her repeatedly and brutally over and over.

At one point, she left the house to get help and she ran away and ended up at an [American] military base. I don't know exactly who took her in, but she ended up getting returned back to her village, and to her husband.

It was such a shame on her family that she had left the house without her husband's permission, even though she had left to seek shelter. He took her up to the mountains, and he was surrounded by a group of his fellow Taliban. They pinned her down and [her husband] sliced her nose off her face as punishment for shaming him.

I don't want to sensationalize something like this, and I don't want to objectify her. But she was terrified. I mean you can feel the terror and the trauma. I think it's important to approach people in a really respectful way, so I tried to let her take the lead of how she felt comfortable [being photographed].

I made a decision: It's more important for me to try and save this woman's life, to try and get her to a hospital. I decided, "I'm not going to shoot anymore."

She was vomiting the whole way because she was in labor. We took them to the hospital, she delivered safely. 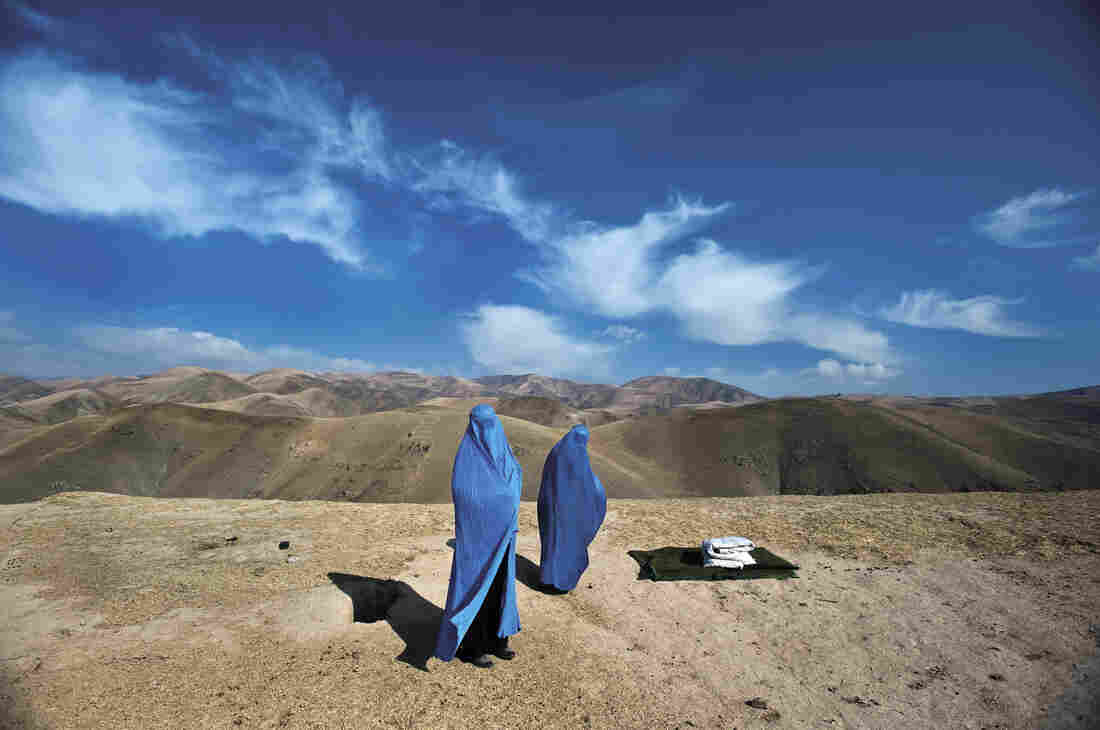 Noor Nisa, 18 (right), was in labor and en route to the hospital with her mother and husband, in Badakhshan Province, Afghanistan, when his car broke down. Lynsey Addario ended up driving Nisa to the hospital, where she delivered a baby girl. November 2009

I never shot her again. And my feeling was that wasn't the point. I took those pictures of her on the mountain, which showed how desolate it was and that this is the situation for a pregnant woman in Afghanistan. And I didn't need to shoot more. 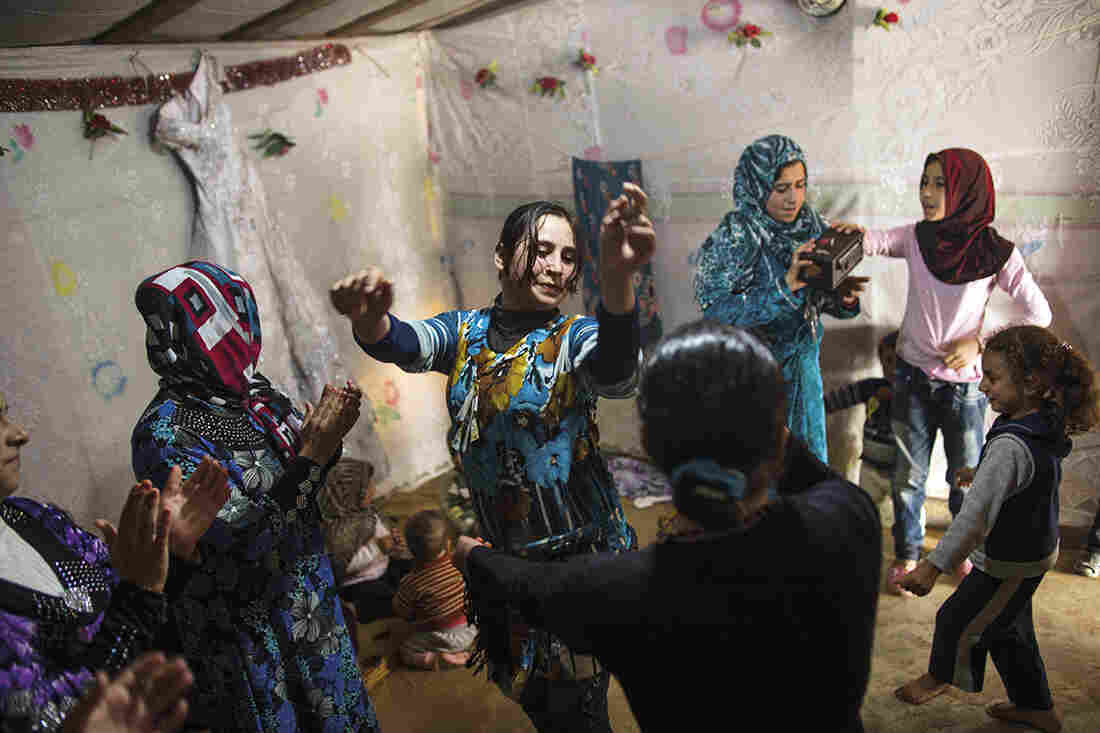 Syrian refugees dance at a wedding celebration in a refugee camp in Marj El-Khokh, in Marjaayoun, Syria. The father of the groom said, "We want to create life out of death .... People should not continue to be morbid." March 2014 Lynsey Addario hide caption 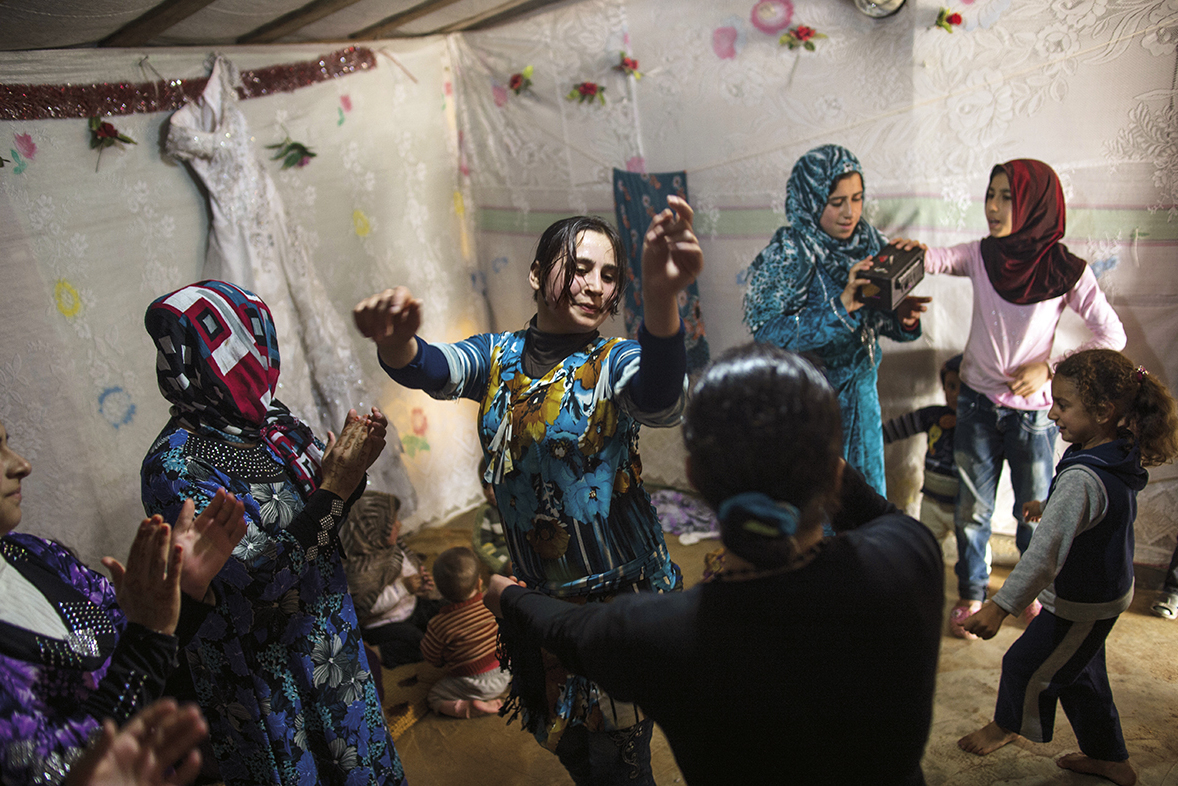 Syrian refugees dance at a wedding celebration in a refugee camp in Marj El-Khokh, in Marjaayoun, Syria. The father of the groom said, "We want to create life out of death .... People should not continue to be morbid." March 2014

I love that along with the many really difficult situations that you're documenting through these photographs, you find so many moments of joy. There's one image of Syrian refugees from March 2014. The civil war is in full swing in Syria, and you've caught them dancing at a wedding, and there's just grace and laughter. You quote the father of the groom saying, "From sadness we want to create happiness."

I try to show the unexpected moments and to show that life does go on in a lot of these places where we assume it doesn't.

When I was shooting in Afghanistan under the Taliban, I remember there was a very bad drought in 2001. I was working in Herat in the west, and the governor of Herat at that time had given permission to photographers to photograph the camps for displaced people because he understood the importance of getting the international community to help.

So I was in this camp with [my] driver, and suddenly he said, "You know, Madam, someone is getting married in my family and I have to go early." And I said, "Well, can I just come with you?" And he said, "Sure." So we went to the wedding.

The streets in Afghanistan under the Taliban were silent because everyone was terrified all the time. There was no music allowed, no TV, nothing. All you heard were footsteps on the streets. We walked into this gated house, and we walked downstairs, and there were people unveiled, dancing around to the soundtrack of Titanic. I remember being completely floored, thinking, "Oh my God, this is illegal," and "I can't believe this is happening. And this is happening right here underground."

That was one of my first experiences [realizing] life does go on and people need a release. 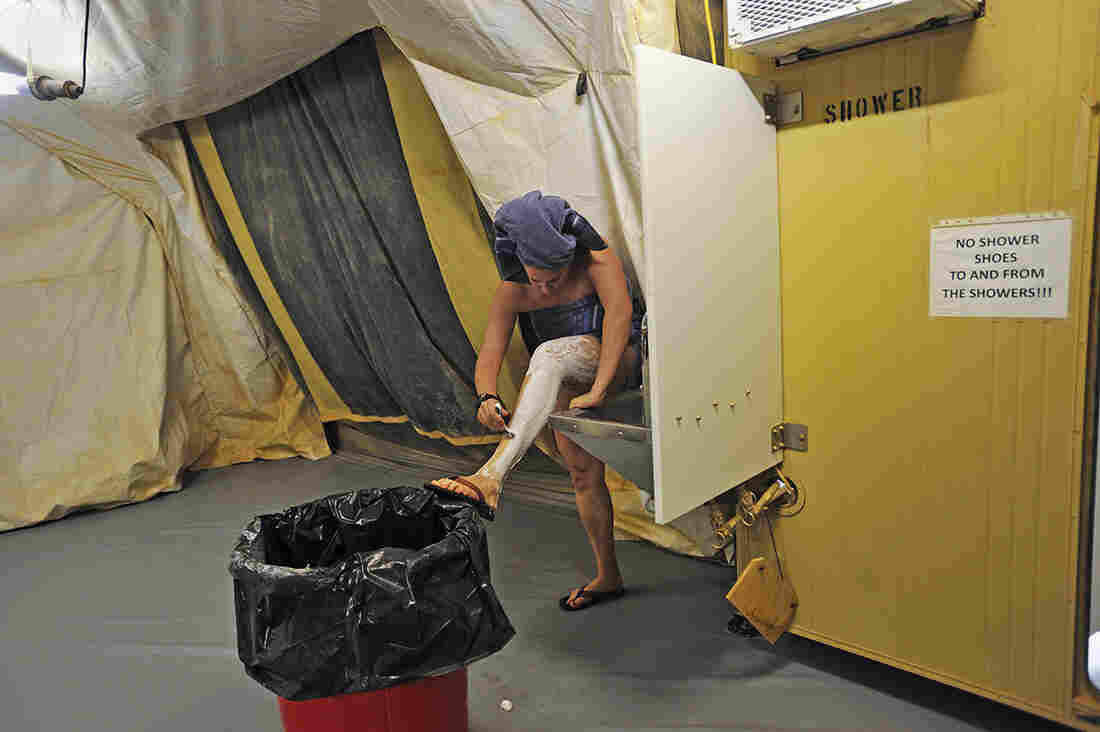 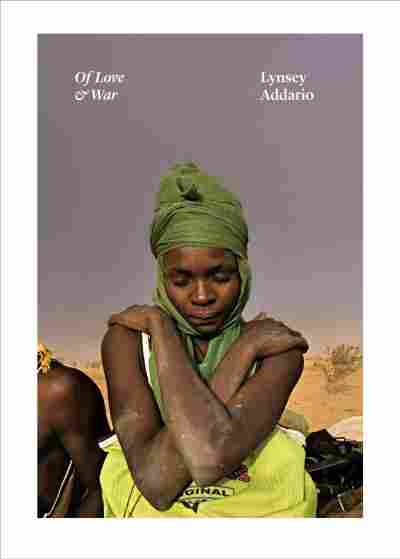 What I loved in this book is you also get great shots of American women. There's a photo of a Navy lieutenant in the Nurse Corps. She's stationed in Helmand Province, Afghanistan.

Amy was a Navy nurse, so she was right there in the trauma hospital. After an intense night, I followed her back to the showers where the women go. I was like, "I want to just shoot what your life is like here," and she was completely fun and open and got it.

As a woman who's worked in a very male world, and in war zones for 20 years, I do everything I can to still try and feel like a woman, whether that means sneaking eyeliner on in the middle of Helmand or lipstick or perfume. I always carry perfume in my camera bag. It's psychological because I have to maintain some semblance of myself.

And that was the fun of photographing women in the military because it was the first time that I actually had women to hang out with. For so many years, it was just me, or me and my colleague [reporter] Elizabeth Rubin, or me and whoever – the only two women for miles.

Kat Lonsdorf and Justine Kenin produced and edited this conversation for broadcast.