Accessibility links
Easier Treatment Approved For The Scourge Of Sleeping Sickness : Goats and Soda The disease is hard to diagnose. And stage 2 patients have faced a week of infusions that can cause additional suffering. Now there's a new option.

Sleeping Sickness Can Drive You Mad. But Treatment Is Now Easier Than Ever

Sleeping Sickness Can Drive You Mad. But Treatment Is Now Easier Than Ever 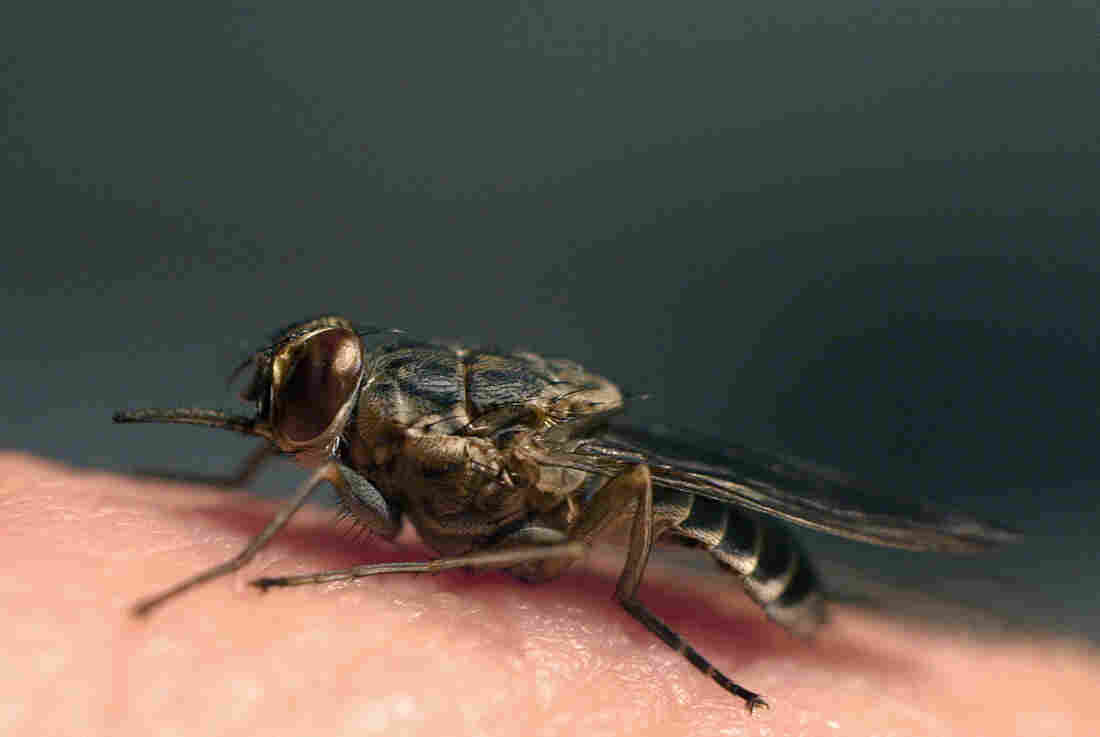 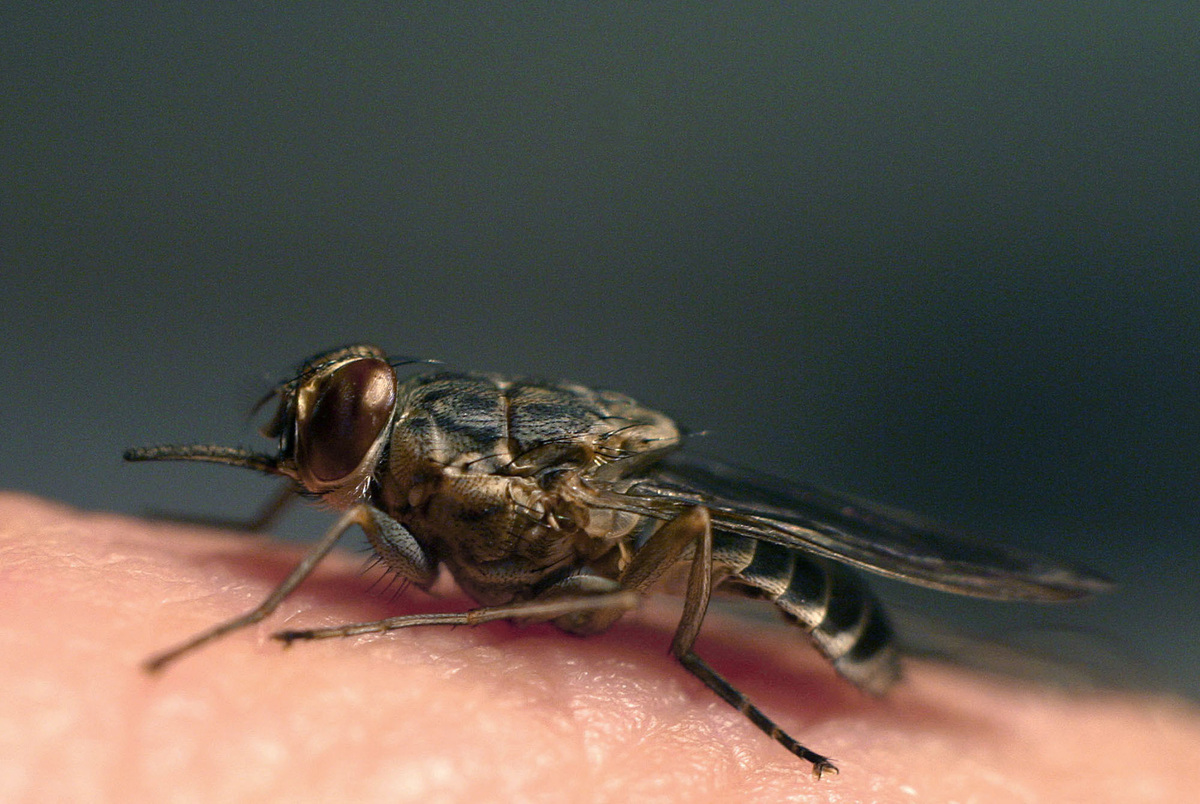 A tsetse fly photographed in the zoological institute of the Slovak Academy of Sciences in Bratislava. Tsetse fly bites transmit the parasitic disease called sleeping sickness.

By the time the infection had invaded Ange Bukabau's central nervous system and begun to affect her brain, her family didn't know what to do with her. She was acting erratic, out of control.

"I was going crazy," says Bukabau, 32, who makes her living as a vendor in a small town in Democratic Republic of the Congo, about 200 miles east of the capital, Kinshasa.

Her family members were frightened — and convinced it was witchcraft. Maybe she had sought a charm to attract a rich man and ended up cursed. "They worried I was a danger to my children, so they took them both away," she recalls. "I was alone."

What neither she nor her family nor the nurse she had seen had realized was that she had contracted African sleeping sickness — a parasitic disease that, if left untreated, essentially drives people mad before killing them. Happily, Bukabau made it to a hospital just in time and was one of the first patients to be treated with fexinidazole, the first treatment for sleeping sickness that relies on pills alone. On Friday, it earned approval from Europe's drug regulatory agency, paving the way for its use in DRC and across east, central and southern Africa, where the disease occurs, by mid-2019.

Sustained efforts to cure the disease and to combat the tsetse flies that transmit it have already brought the number of cases down from more than 10,000 a decade ago to a couple of thousand last year. Experts say this new, simplified medication, which can cure the infection within 10 days, is an important step toward the elimination of African sleeping sickness.

Currently, the most common treatment for the disease involves administering two intravenous transfusions of the drug eflornithine daily for a week. It's a huge undertaking for sparsely staffed and funded hospitals in rural, sub-Saharan Africa, especially in areas beset by violent conflict.

"The infusion treatment caused suffering in the patients as well, causing convulsions or seizures," says Dr. Victor Kande, who headed clinical trials for the new medication.

Early stage sleeping sickness is easier to treat but difficult to diagnose because the symptoms are generic — fever, headache, tiredness. To confirm that patients have the second stage of the disease, and thereby are eligible for the infusions, doctors have to administer a painful spinal tap to see whether the parasites have reached their brains.

The new medication treats all stages of the disease, so doctors can confirm infections with a simpler blood test. "And the main side effect is just nausea," says Kande. "Plus, people can just take it at home. They don't have to stay at the hospital for a week or more."

The more efficient diagnosis and treatment could mean fewer people will carry the disease undetected — and that means a smaller pool of infected people that can be bitten by tsetse flies.

For Kande, who has been treating sleeping sickness since the 1970s, the treatment — born out of a collaboration between the pharmaceutical company Sanofi and the nonprofit Drugs for Neglected Diseases Initiative — has been a long time coming.

"It was in 1978 that I treated my first patient with sleeping sickness," says Kande, who started out as a physician in the remote Equateur region of DRC and later headed the county's national sleeping sickness program. "I've seen real suffering."

Back then, the only option was a drug called melarsoprol, a derivative of arsenic that is still used in some cases. "We'd inject it into patients' veins, and it would cause them so much pain and they'd tremble," Kande says. Between 5 and 20 percent of patients died of complications from the toxic drug.

As word about the excruciating treatment spread, patients with symptoms started to avoid going to the hospital, Kande says. Others live in areas without hospitals and can't afford the transportation to get there. The availability of a cure at local pharmacies and health centers is a game changer, he says.

And whereas the existing treatment costs nearly $400 per patient to manufacture, the new treatment will cost about half of that, according to Sanofi. Plus, pills will be a lot easier and cheaper to transport than heavy infusion kits, especially in conflict-ridden areas of eastern DRC where violence is escalating alongside an ongoing Ebola outbreak.

"This is absolutely a huge breakthrough," agrees Wes Van Voorhis, a professor of infectious diseases at the University of Washington. "There could be a lot of people who get treated with the pill that just don't have access to the infusions."

The clinical trial for the new sleeping sickness drug was relatively small — involving about 750 patients in Congo and the Central African Republic. But Van Voorhis, who wasn't involved in the trials, says it is sufficient to show that the medication works.

"To even find that many patients for the trial is a feat," he says, given the low number of cases, most of them in remote regions.

Regardless of how many or few cases there are, it's crucial to address and eradicate sleeping sickness, Van Voorhis adds — "just because this disease in the past has cycled between very few and very many cases. It has a history of coming back and really afflicting large numbers of poor people. And it causes such intense misery."

Ange Bukabau — who made a full recovery and reunited with her kids — says thankfully, she doesn't remember the worst of it. "What I really want people to know is that African sleeping sickness exists. It's here and it causes suffering," she says. "Though at least for me, everything is finally OK."