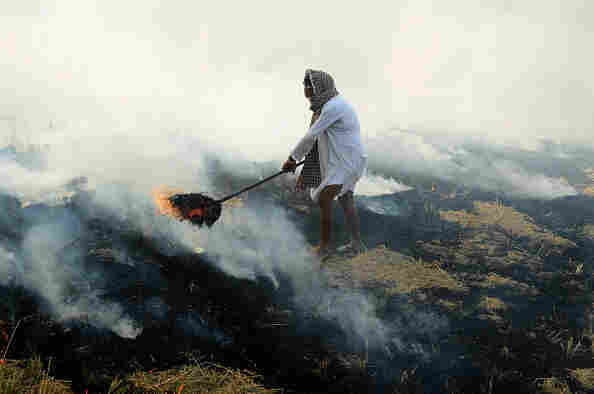 An Indian farmer burns rice stalks after harvesting the crop in fields on the outskirts of Amritsar in Punjab. Narinder Nanu/AFP/Getty Images hide caption 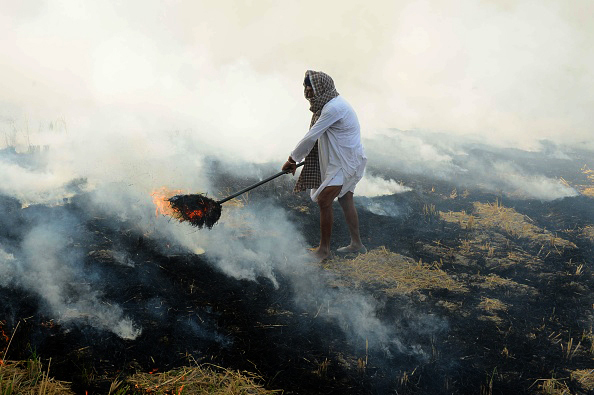 An Indian farmer burns rice stalks after harvesting the crop in fields on the outskirts of Amritsar in Punjab.

Each autumn, farmer Amandeep Singh has just a few days to prepare his fields for the next crop. He must clear stubble left over from the rice harvest, before planting wheat, which grows over winter.

Amandeep, 42, is from a long line of farmers in India's breadbasket, in the northern state of Punjab. Like his father and grandfather before him, he'd always burned the residue known as rice straw – the dry stalks of the plant after the grain and chaff have been removed. It's the fastest, cheapest way to prepare his fields for the next planting.

But when farmers in Punjab set fire to leftover rice straw, smoke wafts across northern India – poisoning the air 200 miles away in Indian capital, New Delhi, and beyond. It's even visible in NASA photos taken from space. The Indian government estimates that more than 103 million acres of land in Punjab are under cultivation – about 83 percent of the total land area.

Amandeep grew up breathing that smoke. "It smells horrible," he says. "And it hurts our other crops, because there isn't proper sunlight for them, when the sky clouds over with smoke."

On some days, the air quality in New Delhi is 20 times worse than what the World Health Organization deems safe. Of the ten most polluted cities in the world, according to the WHO, nine of them are in northern India.

With a growing outcry over pollution, politicians, environmentalists and farmers themselves are examining ways to cut back on crop-burning. Local governments have banned it. Engineers are developing new machines to mulch rice stubble instead. And inventors are probing ways to make paper pulp and biofuel from what used to be a waste product.

This year, Amandeep, who recently became a father, decided he'd had enough. So he broke with tradition, and bought a machine to mulch his rice straw instead. He says about half of the farmers in his village have done the same.

The state government of Punjab banned all crop-burning five years ago, but the order was rarely enforced. Now, amid outrage over pollution in New Delhi, Punjabi officials are under pressure to enforce the law – though some dispute how much of the problem is from their crop burning rather than from traffic or industry in urban areas.

Starting this year, farmers who want to buy mulching machines can get help from the state government. Under a new subsidy program, Punjab will reimburse individual farmers for half the cost of the new equipment. If eight farmers go in on a machine together, the state government will pay 80-percent of the cost. The cheapest ones go for the equivalent of about $1,750.

The machines include something called a Happy Seeder, which attaches to the back of a tractor and mulches rice straw. There are other models that fit on larger combine harvesters.

But farmers need to have a tractor to begin with, and they must learn how to operate the new attachments and buy diesel to run them. Not everyone can afford it.

"A tractor will consume more fuel [with an added attachment]. Labor is also required, even if the initial cost is mostly covered by a government subsidy," says Manjeet Singh, an agricultural engineer who heads the machinery department at Punjab Agricultural University and is not related to Amandeep Singh. "Farmers are aware this pollution is not good. But when cost is involved, that is on their minds."

Manjeet sends his graduate students door to door to persuade farmers to mulch rather than burn. They explain the government subsidies and demonstrate how the mulching machines work. They also tell farmers about scientific research that shows mulching can actually boost their crop yields by grinding nutrients from the rice straw back into the soil.

It's still early, but Manjeet believes he's seeing some change. He estimates that up to 70 percent of farmers in the area around the city of Ludhiana, where he is based, burned their rice stubble last year. This year, he estimates it's dropped to around 40 percent. He's working to collect figures for all of Punjab by the end of the crop-burning season, in early 2019.

Despite such efforts, India's air pollution is only getting worse.

At an outdoor laboratory at the Indian Institute of Technology, Delhi – the local equivalent of Stanford University or the Massachusetts Institute of Technology – some of India's best and brightest are working on this problem. They've come up with another alternative to crop-burning: Rake up the rice straw and sell it, to make paper pulp, fabrics and biofuel.

"The farmers, they're incentivized by the profit. They don't have to worry about their straw lying there anymore," says inventor Pracheer Dutta, 24, co-founder of a start-up company called Kriya Labs. "Somebody will come and take it from them, and pay them for it. That's all they want."

Dutta is currently experimenting on a more than 1,300-pound batch of rice straw collected from farmers in the Indian state of Haryana, which borders Punjab and the capital New Delhi. First he chops up the straw into roughly half-inch pieces and rinses them in a repurposed clothes washing machine, to get rid of dirt and dust. Then he puts the straw in another machine that heats it.

"It's basically a big pressure cooker," Dutta says. The straw gets mixed with a solvent, heats up and breaks down into fibers, he explains.

Dutta is marketing those fibers to tableware manufacturers. He's signed deals with local factories, and plans to debut paper plates made from rice straw next spring. It's cheaper than making paper pulp from wood, he says.

Back up north in Punjab, not everyone is convinced.

Another local farmer, Kuldeep Singh, has begrudgingly stopped burning his rice straw. But he doesn't think it's the best thing for his crops.

"The local government banned crop-burning here. That's why I stopped. I don't want to pay a fine. Otherwise I would have kept doing it," says 55-year-old Kuldeep, who is not related to Manjeet Singh or Amandeep Singh. "Burning sterilizes the soil. It kills pests."

Kuldeep argues with environmental campaigners who visit his farm and rattle off data on how mulching is better, because it leaves nutrients in the soil. He tells them how last year, rats infested his rice paddy, just after the harvest. The only way to get rid of them was to burn the straw, he says. The campaigners, however, note that "sterilizing" the soil needlessly kills microorganisms that can actually be beneficial to agriculture.

He's also worried about fungus. If he leaves the straw on the same ground where he's planting wheat seeds and watering them, he's worried the straw may grow moldy and hurt his winter wheat yield.

Visiting campaigners try to reassure him, that fungus will not grow on his straw and that more nutrients will remain in his soil. His yields will be better, they say.

But Kuldeep is adamant. He doesn't like academics coming and telling him what's best for his land. He wants to farm the way his ancestors always have.

"There are a few farmers who have a traditional way of thinking, and it becomes very difficult to change their mindset. It takes a long time,," says Subhash Chandra Sharma, an engineer who works for Krishi Vigyan Kendra, a community outreach arm of the Indian Council of Agricultural Research. "But this, I can say, this is the beginning of a noble cause."