Accessibility links
U.N. Report: 50,000 Women A Year Are Killed By Intimate Partners, Family Members : Goats and Soda The reasons range from "honor killings" to dowry disputes, according to an analysis of female homicides around the globe. 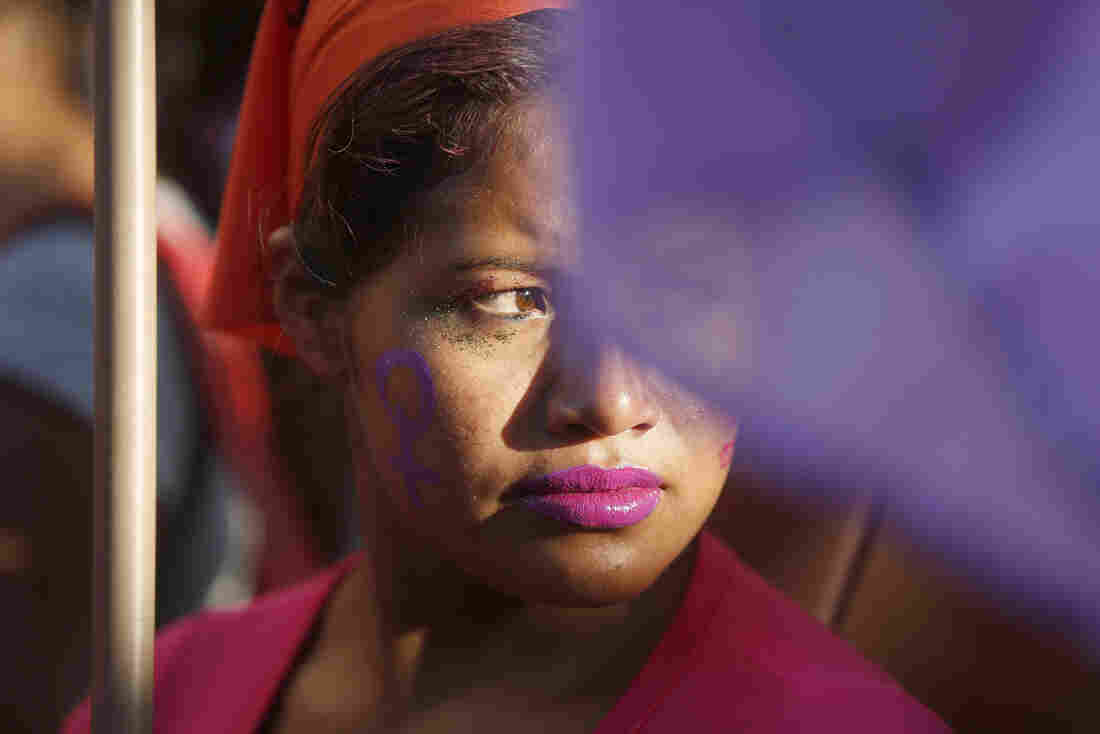 A woman attends a march marking the International Day for the Elimination of Violence Against Women in Asuncion, Paraguay, on November 25. Paraguay is one of the Latin American countries that has passed a law categorizing femicide — killing a woman because of her gender — as a specific crime. Jorge Saenz/AP hide caption 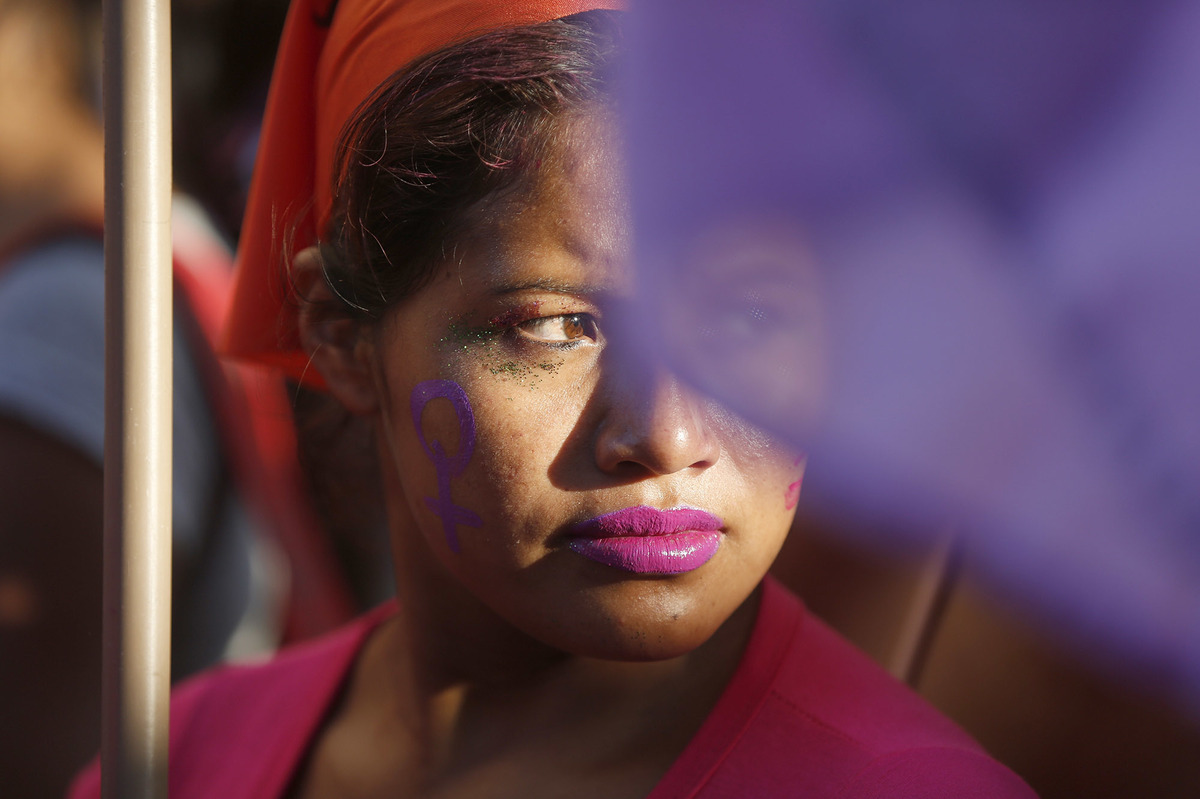 A woman attends a march marking the International Day for the Elimination of Violence Against Women in Asuncion, Paraguay, on November 25. Paraguay is one of the Latin American countries that has passed a law categorizing femicide — killing a woman because of her gender — as a specific crime.

Last year, 50,000 women worldwide were killed by intimate partners or family members — a figure that translates to 1.3 per every 100,000 women, according to a global study on gender-related killing of women and girls released this month by the United Nations Office on Drugs and Crime (UNODC).

And that is only part of the story revealed in the report. These numbers represent the majority, at 58 percent, of an annual total of 87,000 global female homicides. That leaves 42 percent, or 27,000 murders, perpetrated by people outside the family, often for reasons rooted in cultural traditions or beliefs.

For insight into the report and its findings, we spoke to Angela Me, chief of UNODC's research and trend analysis branch.

The conversation has been edited for space and clarity.

How did you gather the information?

We asked countries to provide us with homicide data. For about the past ten years we have been working to identify and specify the crime and homicide numbers around the world. Countries can count how many of the homicides were done by partners and by other family members [and so were able to] look at the relationship between perpetrators and victims.

Did the statistics surprise you?

This shows the magnitude of the problem of intimate partner and family violence worldwide. This happens everywhere, regardless of region. And it keeps happening: We had made a similar estimate a few years ago, of 48,000 female victims, very close to what this study found.

Many of these killings occurred not all of a sudden but after a continuing pattern of violence. It is a well-established fact in research.

The cultural and family context normalizes male violence against women. Even when women seek protection, the community or criminal justice system cannot always provide it.

Are only men doing the killing?

The killings of women by intimate partners or former partners are by men. We didn't find any [statistics] about lesbian partner killing.

Other types, such as honor killings [murder resulting from the belief that a female family member's behavior has brought shame or dishonor upon the family] were carried out mostly by men but also sometimes by women.

Are there particular risks for girls and women at different ages?

We cannot say which ages are most at risk. We see it across all ages.

Sometimes the victims are younger, such as the brides targeted in dowry killings. These occur around the time of the wedding or first years of the marriage. The groom's family threaten, harass or abuse the wife to get a larger dowry. There are many reports of kitchen "accidents" in which she ends up being burned to death. Dowry disputes can continue for years. The report notes that in India penal provisions may apply in any unnatural death of a woman within seven years of marriage.

In India last year, about 7,000 women were killed for dowry-related disputes.

When deaths result from accusations of witchcraft and sorcery, the victims are often older women.

Cases have been reported in rural pockets of Africa, Asia and the Pacific Island where beliefs in myths and spells remain and can be exploited. Older women or widows who primarily depend on male family members are often targeted.

The "witch" is accused of bringing bad luck or having caused something bad that happened in a community or to a specific person.

When men kill their intimate partners, do they ever express regret?

We have examples of interviews [from available homicide data] of men in prison for killing their female partner saying, it's not my fault, she fell on the knife. Or, I didn't realize how strong I was when I strangled her.

Has there been any progress in lowering the incidence of gender-based murders?

The attitudes and causes are heavily rooted in culture and tradition, and they do not change quickly.

But countries are trying. Eighteen Latin American countries have established the criminal offense of femicide, the killing of a female because of her gender. This is a clear signal that this is not acceptable.

In addition, many countries have adopted laws, such as restraining orders, to help protect women from intimate partner violence. They are also providing training for police and prosecutors to heighten their awareness of these issues.

There are also more educational programs. For instance, the Bahamas introduced an early intervention school program to reduce domestic violence. The Healthy Teen Relationship Campaign works with students from primary school on up to create awareness of what's acceptable in a relationship and what's not in terms of forced sex, verbal and emotional abuse, and physical violence.

What else can help?

You need to involve men and boys in the education and have them champion the idea of rejecting violence against women.

And you have to have a way to coordinate the different services available to help women at risk. So that if a woman asks for protection [from a violent partner], the criminal justice system can provide a restraining order, while social services provides a different place for her to live, and the health department can provide counseling and psychological support.

And then you have the children who have been left motherless and vulnerable [after their mother has been killed]. They need to be protected, feel supported, and taken care of.

These are all problems we need to alert the world to.