Accessibility links
7 Of Our Most Read Global Health And Development Stories In 2018 : Goats and Soda Our most-read articles gave helpful advice — like how to sit without hurting your back — shocking news and a glimpse of history. And there was one story about — what else? — goats! 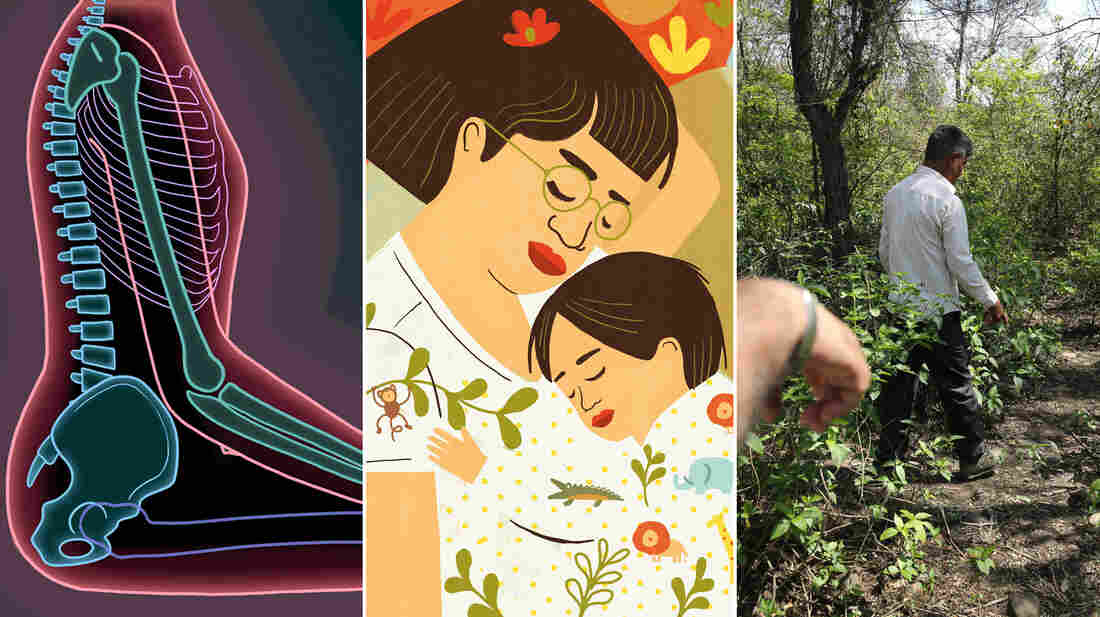 Some images from Goats and Soda's top stories of 2018. From left: changing the way we sit to fix back pain; is sleeping with your baby dangerous?; men walk near the site where the body of an 8-year-old girl, who was raped and murdered, was found. From left: Lily Padula for NPR; Fabio Consoli for NPR; Channi Anand/AP hide caption

Some images from Goats and Soda's top stories of 2018. From left: changing the way we sit to fix back pain; is sleeping with your baby dangerous?; men walk near the site where the body of an 8-year-old girl, who was raped and murdered, was found.

Which Goats and Soda stories were most popular this year?

You loved the stories that looked to the developing world that offered insights into the way we live our lives: how to sit without hurting your back; whether it's OK to sleep with your baby.

Readers also were drawn to stories of injustice (like the gang rape and murder of an 8-year-old girl in India) and looming dangers (the thawing permafrost in Alaska could release billions of tons of carbon dioxide into the Earth's atmosphere).

You also liked our fact-checking stories. When the Netflix show The Crown showed a dance between Queen Elizabeth II and Ghana's leader Kwame Nkrumah in 1961, we got the real story. And we investigated Matt Damon's clean water promise in a Super Bowl ad.

From the 392 global health and development stories posted on our blog in 2018, here are seven of our most popular stories, ranked by page views.

To Fix That Pain In Your Back, You Might Have To Change The Way You Sit

Back problems crop up because sitting like a C — or a cashew nut — puts stress on the little shock absorbers in the spine, called the intervertebral disks. Sitting in a C-shape, over time, can cause disk degeneration. Or one side of a disk can start to bulge.

"When you sit with a C shape in your spine, you're sitting on this tail," says Jenn Sherer, who runs a studio in Palo Alto that teaches people how to move, sit and stand as they did in the past — and as they still do in other parts of the world. "It's kind of like a dog with its tail between its legs, who is scared and frightened."

To straighten out the C shape, Sherer says, "we need to position the pelvis in a way that this tail could wag."

In other words, we need to untuck our tails. To do that, Sherer says, you need to bend over properly when you go to sit down.

She was 8 years old and wearing a purple salwar kameez when she disappeared on Jan. 10.

A week later, on Jan. 17, her mutilated and lifeless body was found in a forest near Kathua in the Indian-controlled region of Kashmir. It was a mile away from Rasana, the village where her family was living.

Reports say she was abducted while grazing her horses in a meadow, taken to a prayer hall nearby, sedated for three days, tortured and brutally raped. Her abductors eventually strangled her and hit her on the head several times with a stone to ensure that she was dead.

Details from the report revealed that the crime was fueled by religious and political tensions between the young girl's tribe, a group of Indian Sunni Muslims called the Bakarwal, and local Hindus who saw them as a threat. 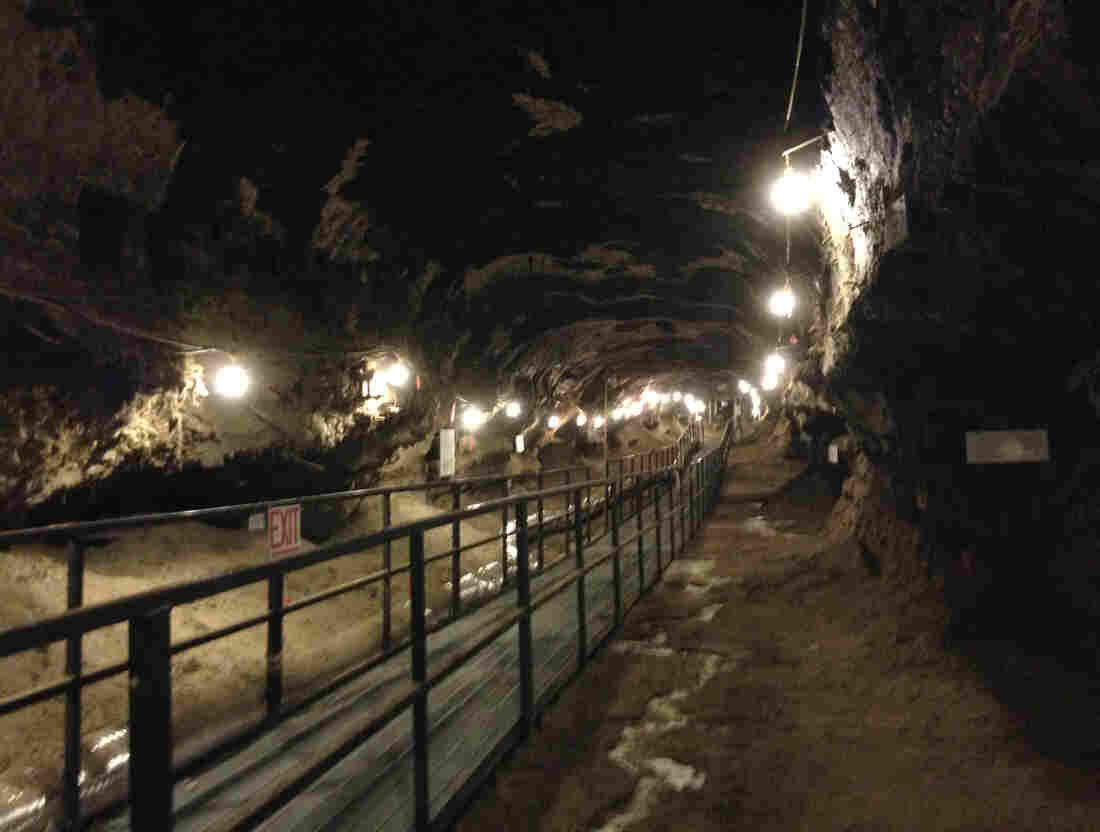 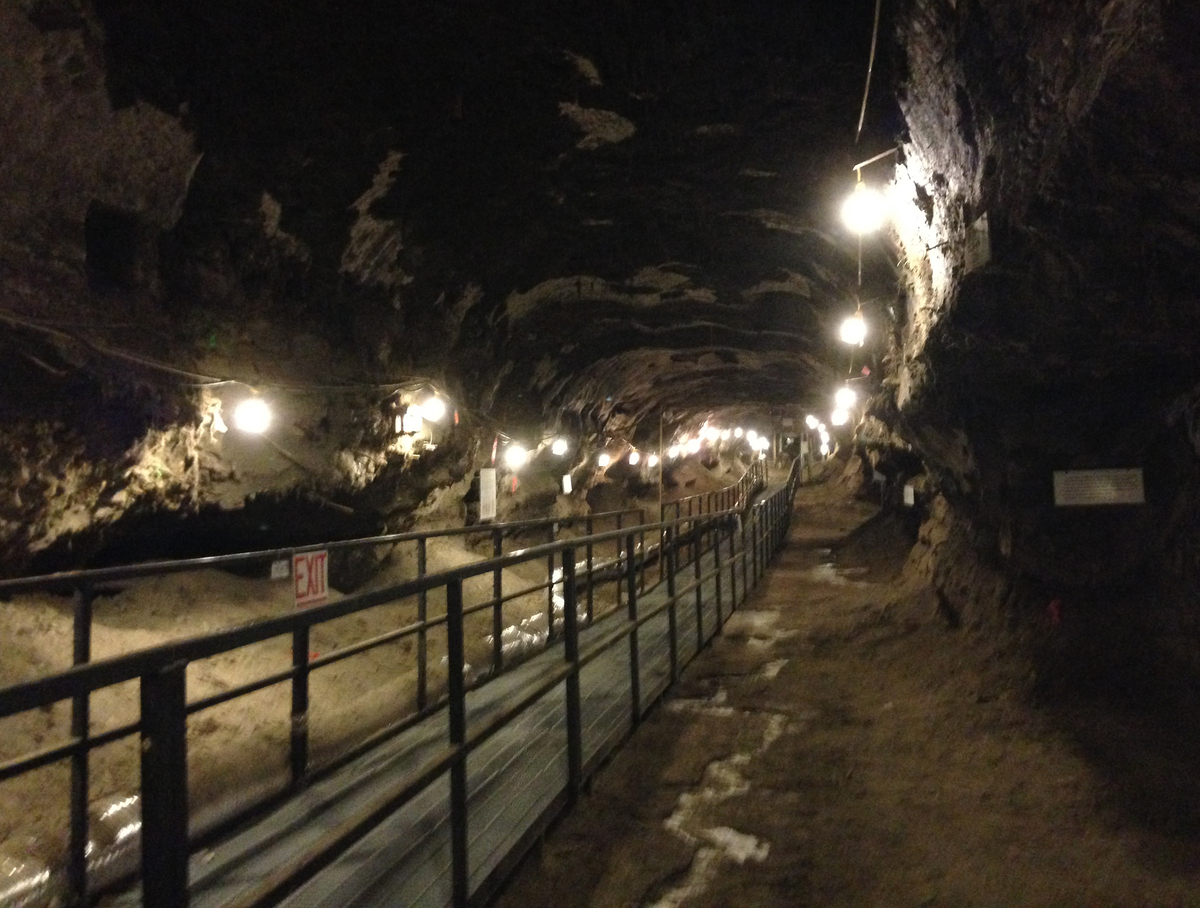 In northern Alaska, the temperature at some permafrost sites has risen by more than 4 degrees Fahrenheit since the 1980s, the National Oceanic and Atmospheric Administration reported in November 2017. And in recent years, many spots have reached record temperatures.

The consequences of this warming could have ripple effects around the world.

"The permafrost contains twice as much carbon as is currently in Earth's atmosphere," says Dr. Thomas Douglas, a geochemist at the U.S. Army Corps of Engineers. "That's 1,600 billion metric tons."

Scientists don't know yet how much carbon will get released from thawing permafrost or how fast it will happen. But once carbon begins to percolate up through the thawing soil, it could form a feedback loop "over which we would have zero control," says Charles Miller, a chemist at NASA's Jet Propulsion Laboratory who measures gas emissions from Arctic permafrost.

Here in the U.S., more moms are choosing to share a bed with their infants. Since 1993, the practice in the U.S. has grown from about 6 percent of parents to 24 percent in 2015.

But the practice goes against medical advice in the U.S. The American Academy of Pediatrics is opposed to bed-sharing: It "should be avoided at all times" with a "[full-]term normal-weight infant younger than 4 months," the AAP writes in its 2016 recommendations for pediatricians. AAP cites seven studies to support its recommendation against bed-sharing.

But a close look at these studies — and an independent analysis from statisticians — reveals a more nuanced picture. And some researchers say it might be time for the U.S. to reassess its recommendation and its strategy to stop SIDS.

A listener flagged down for us a post he saw on Facebook: Two goats were stuck on a beam about 100 feet above the ground. The beam is part of a Pennsylvania Turnpike bridge in rural western Pennsylvania.

The goats had escaped from their yard. And goats do love to climb and explore, notes goat specialist Susan Schoenian of the University of Maryland College of Agriculture and Natural Resources.

A dramatic rescue operation was carried out by the Pennsylvania Department of Transportation. "It was my first goat extraction," says Steve McCarthy, a civil engineer with the department. 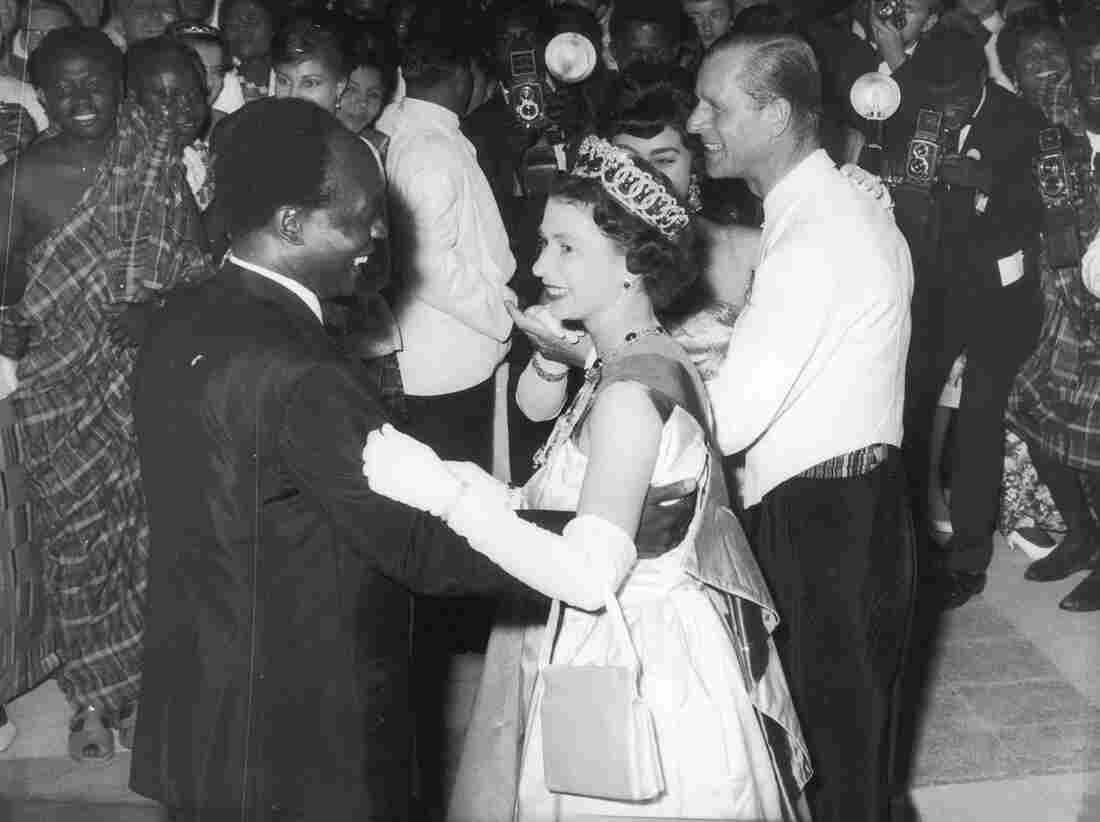 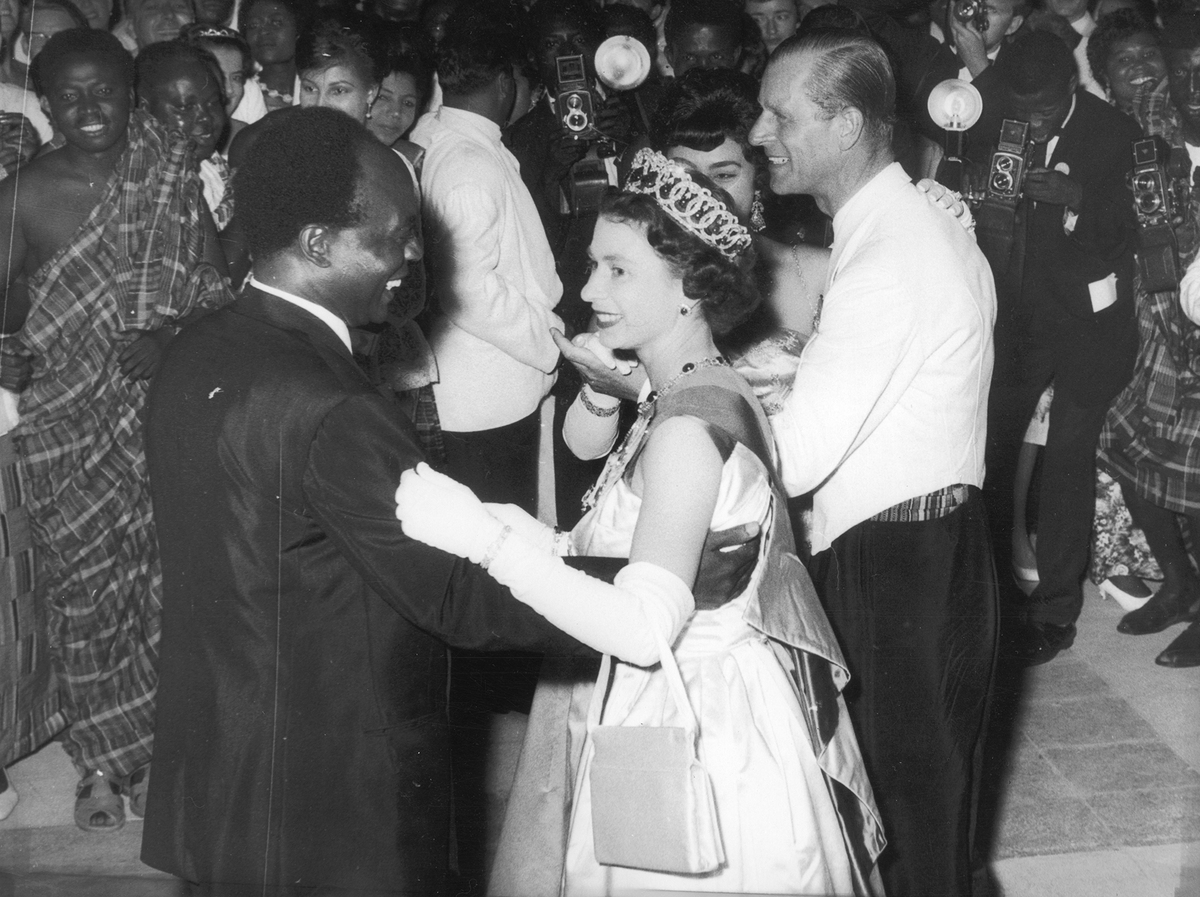 Queen Elizabeth II dances with Ghanaian President Kwame Nkrumah at a ball in Accra, Ghana, in 1961.

It was a highlight of the latest season of the Netflix series The Crown, which chronicles Queen Elizabeth II's reign: The year was 1961, the Cold War was heating up and the queen (played by Claire Foy), feeling self-conscious after learning that first lady Jackie Kennedy (Jodi Balfour) called her "incurious" at a dinner party, decided to take a more active role in dealing with Ghana, a former colony whose new leader, Kwame Nkrumah (Danny Sapani), appeared to be getting too cozy with the Soviets.

Her solution: A dance with Nkrumah at a ball in the capital, Accra.

It turns out The Crown got a lot wrong about that dance, according to Nat Nuno-Amarteifio, an architect and amateur historian who served as mayor of Accra from 1994-98 and remembers the queen's visit from his teenage years.

In a Super Bowl ad, Matt Damon made a bold promise: Buy a limited-edition Stella Artois chalice and your money will help give a clean water supply to someone in the developing world for five years.

"If just 1 percent of you watching this buys [a chalice], we can give clean water to 1 million people," Damon says in the ad.

Damon's statement about "1 percent of you watching" would add up to roughly 1 million purchases from the Super Bowl audience. According to Water.org, Stella Artois would donate the $3.13 for "up to 300,000 chalices" sold in the U.S. between Jan. 1 and Dec. 31.

And what exactly does that $3 buy? Can it really bring clean water to one person for half a decade? Skepticism surfaced on Twitter.

Which Goats and Soda story did you love in 2018? We want to hear from you. Tweet us at @NPRGoatsandSoda or drop us a line at goatsandsoda@npr.org.