Accessibility links
Millions Of Women In India Fan Out For 385 Miles To Champion Gender Equality : Goats and Soda Their cause is gender equality. For many of them, the motivation to take part was highly personal. 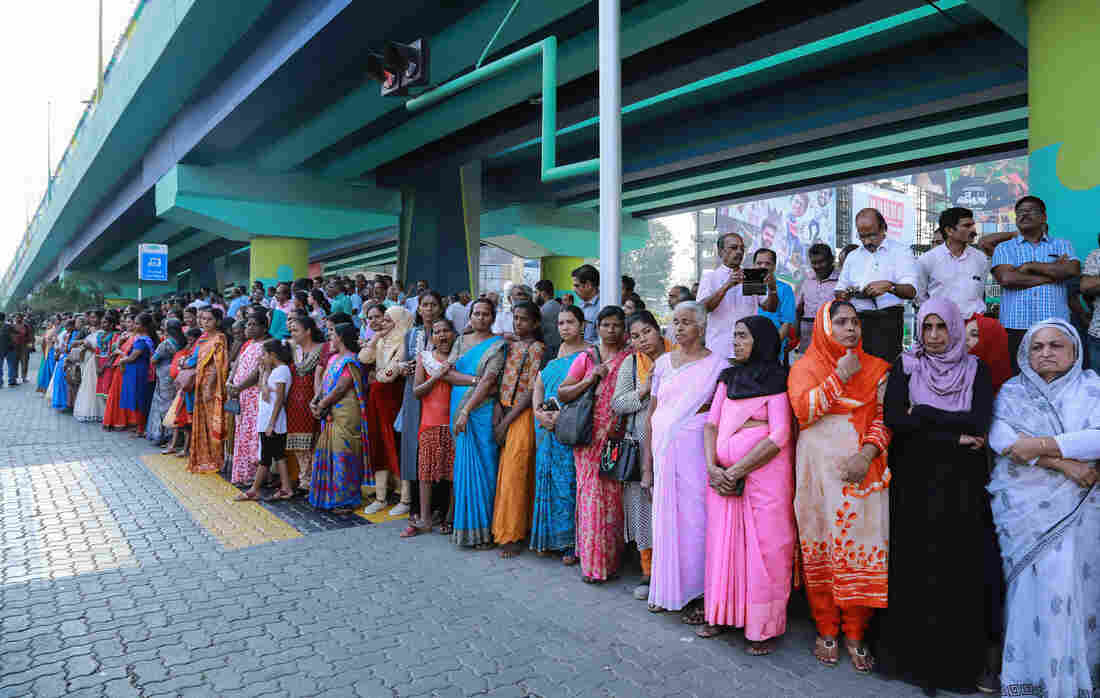 Millions of women joined hands along a highway in Kerala to form a "women's wall" on New Year's Day. For participants, the goal is gender equality. AFP/Getty Images hide caption 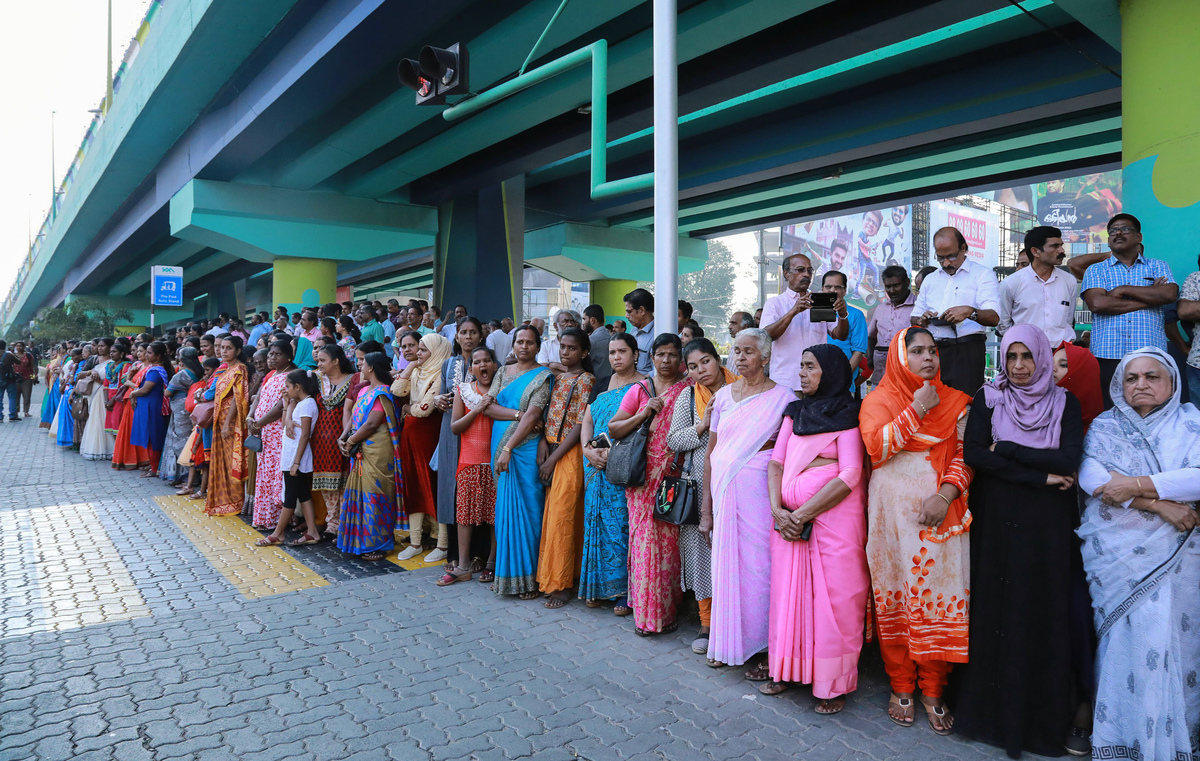 Millions of women joined hands along a highway in Kerala to form a "women's wall" on New Year's Day. For participants, the goal is gender equality.

It was 3 p.m. on New Year's Day when Rakhee Madhavan, a 39-year-old teacher living in Kochi in the southern Indian state of Kerala, decided that she wanted to begin 2019 by doing something meaningful.

So Madhavan, who was visiting her hometown of Mullukkara 60 miles away for the holidays, boarded a bus there that was brimming with women. One hour later, she was part of what is reportedly the largest public gathering of women for the cause of gender equality in India.

They called it the "women's wall" — vanitha mathil in the local language of Malayalam.

According to government estimates published in the Indian press, somewhere between 3.5 million and 5 million women lined up on National Highway 66, a long stretch of road that runs along the country's western coast. The "wall" stretched out 385 miles. Organizers said it was a continuous chain from one end of the state to the other, but some critics say there were gaps.

Kerala is roughly the size of Switzerland and has a population of about 35 million.

The demonstration was planned to create awareness of gender equality — and to protest a religious ban that prevented women of menstruating age from entering one of the country's sacred Hindu temples even after the Supreme Court ruled in favor of their entry on Sept. 28 last year.

The proposal for the demonstration was announced by the government in early December, after the threat of violence from male devotees forced several women to abandon their attempt to enter the Sabarimala temple. The event was organized by the Left Democratic Front, a coalition of political parties in Kerala led by the chief minister of the state, Pinarayi Vijayan, but no state money was used. The demonstration was funded by several independent women's organizations and by political parties in Kerala.

Volunteers from more than 176 social and political organizations joined forces with the Kerala government to make the event happen. It was discussed for weeks on news channels and on social media. Word spread in small towns and in rural areas through word of mouth. On New Year's Day, the organizers arranged for private buses to transport women to points along the highway. Transportation appears to have been one of the main expenses.

At 3:30 p.m., organizers helped women find a place along the highway. At 4 p.m., they were asked to join hands and take a pledge for equality. They held this pose for 15 minutes.

For Madhavan, as for many other women who participated, the motive was not a political or religious issue but a deeply personal one that transcended the temple ban.

"I've heard so many older women say that they're impure when they're menstruating and it's disturbing," she says. "I didn't want the impressionable young girls I teach to imbibe the same message. I wanted to be a part of this because I believe it's time for awareness and for change."

When Madhavan uploaded the pictures of protest on her Facebook page, she says it initiated a great deal of interest and sparked discussions on gender equality among her students.

The era of women folding hands and submitting to patriarchy is beginning to end from here. They will throw their fists on the air and demand for their rights. Women's wall is just a beginning, a baby step of the impending cultural revolution. #WomensWall #VanithaMathil pic.twitter.com/cK1QpXQBk2

Even as women of all ages lined up on one side of the highway, many of their menfolk — husbands, friends and relatives — lined up on the other side to show their support.

For Vigi Ninan, 46, a lawyer practicing in the family courts of Thiruvalla who was part of the protest, the huge turnout of men, women and children was an indication of how the country is gradually awakening to a woman's right to be treated as an equal.

"After all, it is our constitutional right," she says. "But it's significant that many men supported the protest as well; we weren't alone in this." Her husband, a local administrative officer, attended. Men took to social media to tweet their support:

They came like streams, joined to form rivers, merged in an ocean of humanity and progressive thinking. A day to remember #OurRenaissance values and to pledge that we will carry it in our hearts forever.#VanithaMathil #WomensWall pic.twitter.com/7E5D7ZisoA

My mom (second from left) just came back tired from #WomenWall and dad promptly made her tea. #SmallWins #vanithamathil pic.twitter.com/QyoAwRpSSw

After the gathering, the chief minister's office tweeted:

CM Pinarayi Vijayan warmly congratulates all who made Kerala's #WomensWall a great success. The 620 KM long gathering, organized to uphold the values of Kerala Renaissance, saw huge participation of women from all walks of life. This is a momentous occasion in our social life. pic.twitter.com/DiJlgzgSUO

On Wednesday, the day after the gender wall demonstration, Indian media reports emerged of two women under the age of 50 finally managing to visit the sacred shrine. The women were escorted by police into the temple in complete secrecy in the wee hours of the dawn. They were given police protection to avoid the mobs that had kept women at bay previously. They have since been taken to an undisclosed location.

On Thursday, right-wing groups declared a hartal — a strike involving the closure of shops, usually following a sorrowful event. Violent protests erupted in the state as mobs took to the streets hurling stones and crude bombs. One person was killed and 14 others were injured. State police arrested 745 people.

That same day, a third woman visited the temple amid the protests.

For Madhavan, the violence was distressing but did not dampen her spirit.

"Social change doesn't happen in a day," she says. "It needs time. But with these small steps, we've made it easier for the next generation to embrace it. In this way, the wall of women marks a new dawn for feminism in India."