Accessibility links
Dubious Claims About Einstein, Dinosaur, Ancient Jets At Indian Science Congress : Goats and Soda The remarks, which also included a claim that a Hindu god created the dinosaurs, sparked an uproar among scientists and congress organizers and on Twitter. 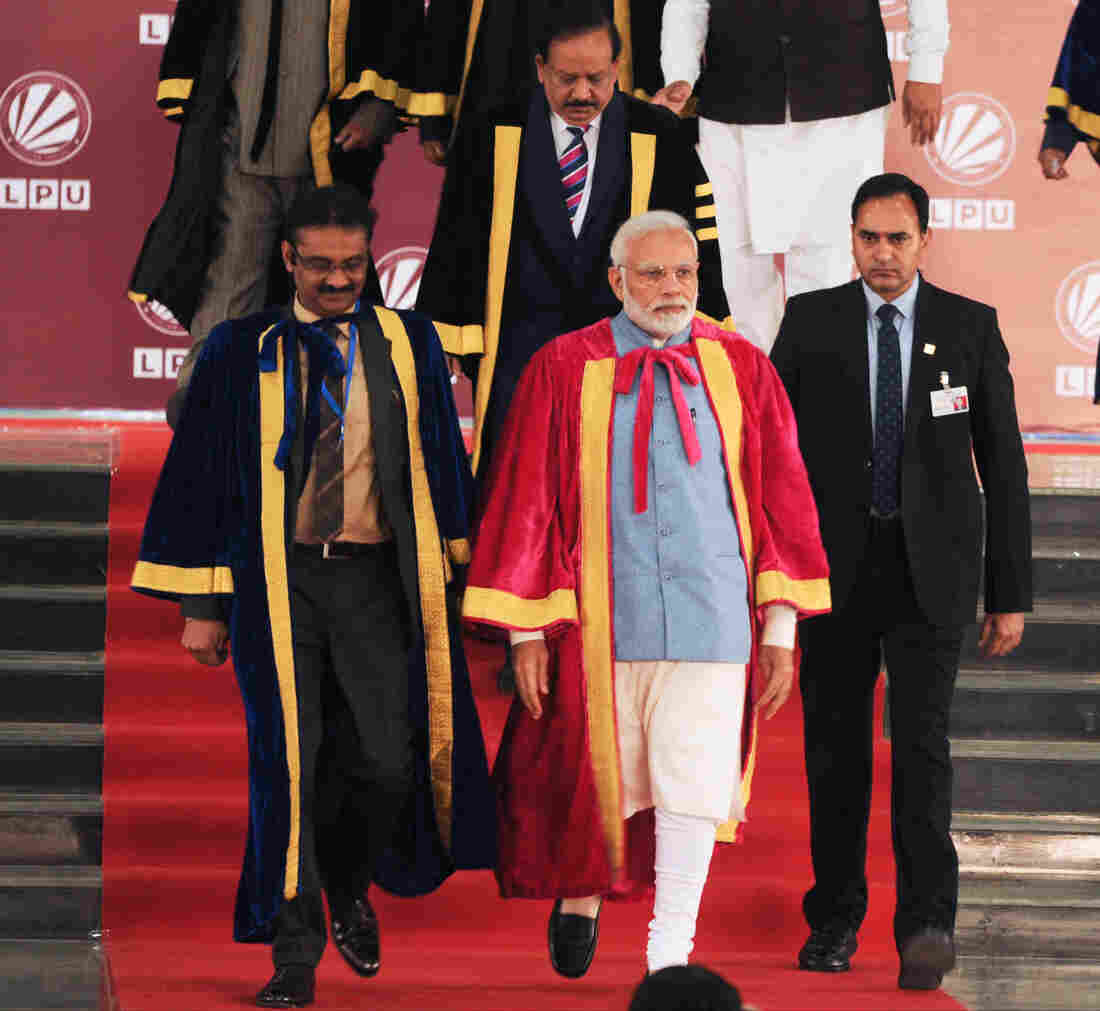 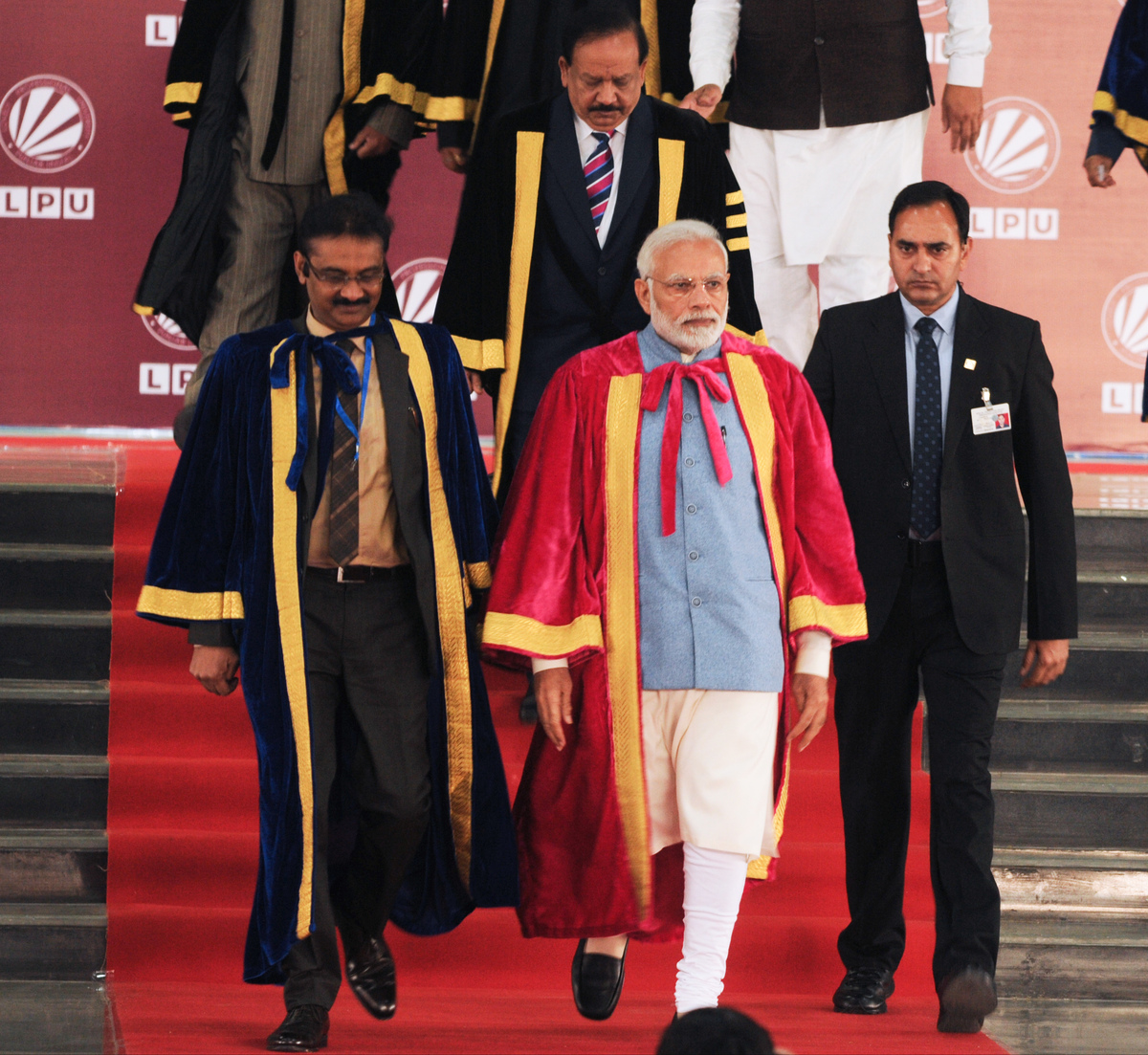 Nageswara Rao, a vice chancellor at Andhra University in South India, said that Ravana, a demon god with 10 heads, had 24 kinds of aircraft of varying sizes and capacities — and that India was making test-tube babies thousands of years ago.

Dinosaurs were created by the Hindu god Brahma, said Ashu Khosla, a scientist with expertise in paleontology at Panjab University in the North Indian city of Chandigarh.

Not exactly the kind of remarks you would expect at an event whose mission is to advance and further the cause of science, to stimulate discussion on scientific theories and to create an awareness of science-related issues, especially among children — and that is funded by the Indian government's Ministry of Science and Technology.

Krishnan, Rao and Khosla were addressing a group of 5,000 children assembled from all over the country at the event's Children's Science Congress. Their lectures were posted on YouTube and reported widely by the press. The congress organizers were red-faced, and the scientific community in India was outraged.

Many citizens tweeted their shock:

Please do rename this mega science event also as “Indian Superstition Congress”. Since past few years science congress has become a stage to glorify superstitions and myths then why don’t they rename the event as well..🤔 #IndianSuperstitionCongress #IndianScienceCongress pic.twitter.com/XZrQgmXgYl

The organizers of the conference were taken aback. "This is the 106th edition of the Science Congress," said the group's general secretary Premendu P. Mathur in an interview with NPR. "Since 1914, we've had so many meaningful conversations with children on science. We've hosted Nobel laureates from around the world, and yet the controversy overshadows the good when some people misuse our platform for personal and political gain."

About 15,000 scientists from India and around the world attend the conference every year, said Ashok Saxena, a zoologist and a former president of the congress, in an interview with NPR. They are a part of the 50,000-strong Indian Science Congress.

Invitations were sent to 250 scientists and researchers to speak at the various sessions of the annual event.

Among the famous attendees this year were three Nobel laureates: Hungarian-born Israeli biochemist Avram Hershko, who won the prize for chemistry in 2004; British-born physicist Duncan M. Haldane, who was awarded the Nobel Prize for Physics in 2016; and German-born American Nobel laureate for medicine in 2013, Thomas Christian Südhof,

Addressing the comments made during the children's event, Saxena said, "We never dreamed that some of them would spout such irrational ideas. They were invited to speak based on their science credentials."

But this isn't the first time the Indian Science Congress has been mired in controversy. In 2016, Nobel laureate Venkatraman Ramakrishnan famously called the event "a circus" because of the way religious ideologies held sway over science and said he wouldn't attend another session.

Many scientists believe that politics is the problem.

The rise of the Bharatiya Janata Party, Prime Minister Narendra Modi's party, in 2014 meant that the ideals of the organization that it is closely linked with — a right-wing group called the Rashtriya Swayamsevak Sangh (RSS) — are now mainstream. The RSS believes in propagating Hindutva as a nationalist movement. The term refers to the effort to establish a Hindu way of life and glorifying Hindu beliefs.

1) It is OK to be angry and embarrassed about the buffoonish claims that have been made at the #IndianScienceCongress, but this is really not the first time. We have heard about controversial claims being made at every science congress ever since the Hindutva forces came to power

Indian scientists have expressed their displeasure over the controversial comments.

"It makes me uncomfortable when pseudoscience statements are made from a platform like the Indian Science Congress," said Kushagra Agrawal, a research scholar in the department of chemical engineering at the Indian Institute of Technology, Guwahati. The idea of such events is to show the world India's scientific prowess, he said, "but it makes me wonder what impression those Nobel laureates and other foreign scientist dignitaries will take from our country."

The principal scientific adviser to the prime minister, K. VijayRaghavan, wrote in a blog post that the "scientifically completely untenable" claims could cause harm if they were to find their way into public policy: "When lay people, including politicians, make random and untenable statements linking religion, culture, the past etc to science, the problem is to be addressed by collegial communication. When scientists make such links, they should be addressed more squarely."

He calls the pseudoscientists "gorillas" in the room and blames them for hijacking real scientific conversations.

But at this time, many scientists say, there is no evidence that this kind of pseudoscience has seeped into public policy just yet. Agrawal says he believes Indian bureaucracy has a staff of competent scientists who can advise and guide policymaking in the right direction.

And Modi's comments at the congress have been well-received by the scientific community. The prime minister, who has tweeted that 2018 was a "great year" for science in India, expanded on this theme in his speech on Jan 4. He cited Scopus, an international database of research papers, as indicating that the country was among the Top 5 in terms of publishing scientific research. He urged Indians to focus on innovations and startups, especially in finding ways to increase agriculture produce through technology.

The key achievements of Indian science this past year, he said, were expressed in such innovations as the production of aviation grade biofuel, a real-time landslide warning system that can help during flooding emergencies, a portable reading machine for the visually impaired and inexpensive devices for the quick diagnosis of cervical cancer, tuberculosis and dengue, diseases that affect millions in India.

But Modi has not addressed the growing controversy over the many comments at this year's congress linking science and religion.

For next year's event, organizers intend to vet speeches, especially those meant for children, said Mathur, the congress general secretary. "We've never censored scientists before. We expected them to motivate young minds and speak responsibly, but now, each session will have to be closely monitored. We won't allow others to use our platform for their selfish reasons anymore," he said.