Accessibility links
Teenage Sisters Get Global Respect For Campaign To Rid Bali Of Plastic Bags : Goats and Soda Plastic is choking our oceans. Inspired by Gandhi's activism, two young women on the island of Bali are on a mission to do something about it. 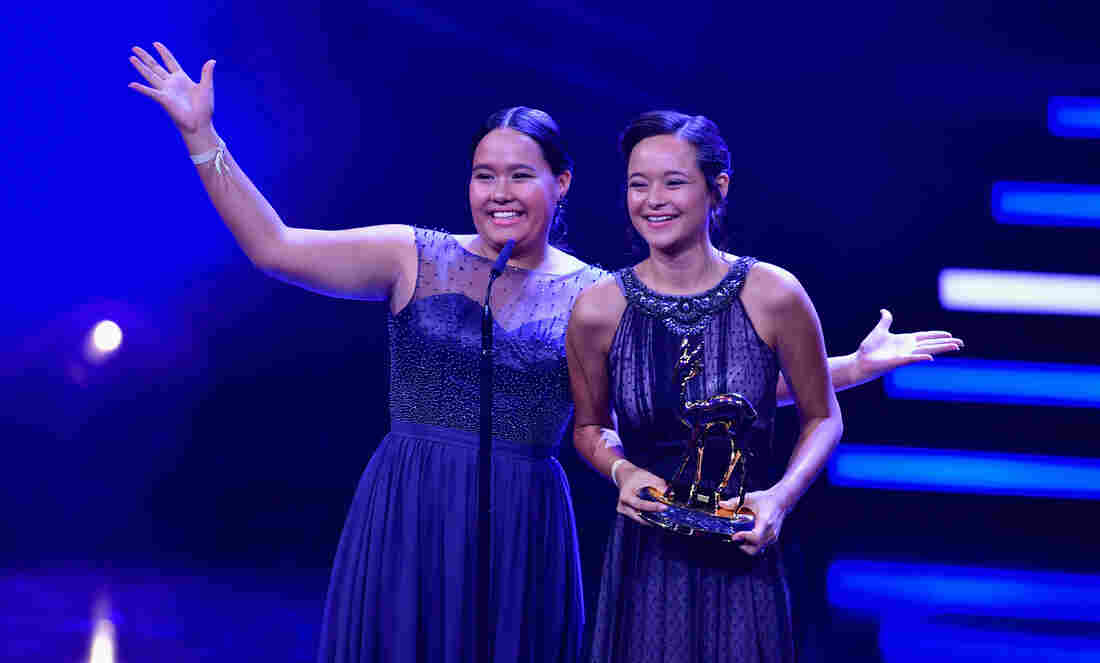 Teenage sisters Melati and Isabel Wijsen of Bali have received many honors for their efforts to ban plastic bags. Above: They accept the 2017 "Award for Our Earth" from Germany's Bambi Awards. Alexander Koerner/Getty Images hide caption 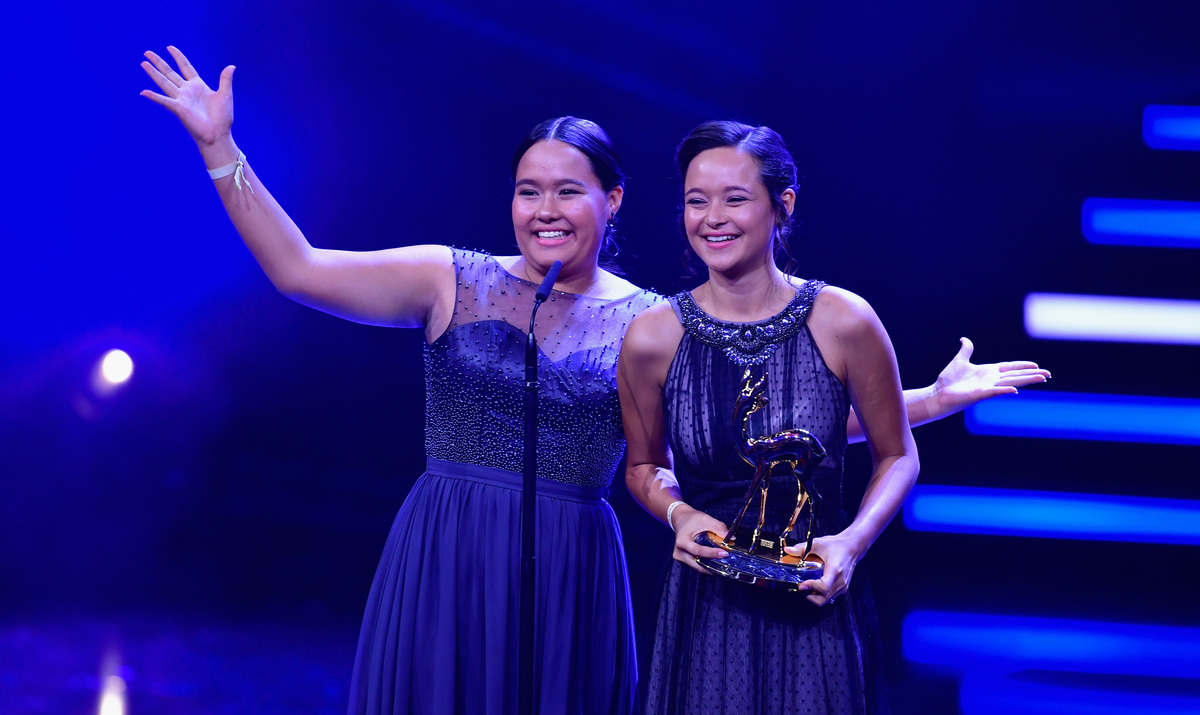 Teenage sisters Melati and Isabel Wijsen of Bali have received many honors for their efforts to ban plastic bags. Above: They accept the 2017 "Award for Our Earth" from Germany's Bambi Awards.

Five years ago, two young women decided they were going to do something about the plastic problem on their island of Bali.

How young? So young one of them couldn't make it to our midweek interview. "She's at school," explained 18-year-old Melati Wijsen, talking about her 16- year- old sister Isabel.

About 'The Plastic Tide'

NPR is exploring one of the most important environmental issues of our time: plastic waste. Click here to read more about the topic.

Bali is part of the island nation of Indonesia, which is the world's second biggest polluter when it comes to marine plastic, trailing only China. And when ocean currents carry that plastic to the tourist island of Bali, it's a public relations nightmare. This video taken by British diver Rich Horner last year pretty much sums up the scale of the problem as he tries to navigate through a sea of plastic just below the water's surface.

The two sisters got the idea for Bye Bye Plastic Bags in 2013 after a lesson at school about influential world leaders — change-makers — including Nelson Mandela, Martin Luther King Jr. and Mahatma Gandhi.

"My sister and I went home that day thinking, 'Well, what can we do as kids living on the island of Bali?' " Melati Wijsen says.

"You see, we didn't want to wait until we were older to start making a difference. It wasn't even a question, really. It was more like, what can we do, as kids, right now."

"It got to the point where on weekends when we would go to our childhood beach, if we went swimming there, a plastic bag would wrap around your arm, Wijsen says. "And you say just, enough is enough."

They went online and discovered that over 40 countries had already banned or taxed plastic bags.

"We thought, 'Well, if they can do it, c'mon, Bali! C'mon, Indonesia! We can do it, too!' " Wijsen says. "So, without a business plan or a strategy or a budget, like my mom will tell you, we went forward with a pure passion and intention to make our island home plastic bag free."

They got some friends together, went online to start a petition and got 6,000 signatures in less than a day, Wijsen says. They spread awareness through school and community workshops. The organized massive beach cleanup campaigns, all the while drawing international attention and that of local politicians too. Especially when they decided to up the ante optics-wise.

"I think one of the biggest tools that pushed us forward was our decision to go on a food strike," Wijsen says, inspired, she says, by one of the tools used by Gandhi. "He also had peaceful ways of reaching his goals, of getting attention, So that was a huge inspiration for us."

The sisters put the word out about their plan on social media. Local media picked it up, and that's prompted the governor at the time, I Made Pastika, to do what any savvy politician would do when faced with two teenage girls threatening a hunger strike. He invited them to come see him. "Within 24 hours, we had a phone call and then the next day we were picked up from school and escorted to the office of the governor," Wijsen says.

Pastika signed a Memorandum of Understanding with the sisters to work toward eliminating plastic on the island — and later pledged to rid Bali of plastic bags by 2018. That didn't happen, but the sisters kept engaging government at every level — local, municipal and national — to keep up the pressure. Melati Wijsen says she learned a lot about dealing with politicians in the process.

"Yeah, well, being 14 and skipping school on a Tuesday because I had to learn about draft regulations and suggestions really was an interesting learning curve for me," she says. Dancing with politicians, she says, is like three steps forward, two steps back and again, and again. It's almost like the cha-cha. I learned a lot of different things."

Wijsen says that in the past year she's spent about 100 nights on the road with speaking engagements to get out the anti-plastic message and to talk about youth empowerment as well. The sisters have given a TED talk, spoke at the U.N. in New York and again last year at the IMF World Bank Forum in Bali. World Bank CEO Kristalina Georgieva called Melati "a girl that is changing the world around her."

They've also been named among the world's most influential teenagers by Forbes, Time magazine and CNN.

And just last month, the new governor of Bali announced a law banning single-use plastic in 2019, thanks in part to the sisters' efforts and those of like-minded NGOs.

Businesses have six months to comply or face having their business permits revoked.

Melati Wijsen was thrilled with the news. But she says there's still lots of work to be done spreading the no-plastic gospel not just in Bali and Indonesia but around the globe.

So Bye Bye Plastic Bags is multiplying. "We're actually now in 28 locations around the world, and it's all led by young people," Wijsen says. "We've created a starter kit and a handbook that guides them through this process of how to start a movement."

She wants to continue being heard — and demanding change. And she wants other young people to do the same: "For us, everything is happening in our lifetime, right? So we have to be the ones to start working toward the future and the world that we want to be a part of."

In addition to efforts in Bali, the Indonesian government has pledged to do its part in eliminating the scourge of plastic pollution. It's committed to reducing plastic pollution by 70 percent by 2025. Melati Wijsen will be closely monitoring their efforts.

She's graduated from high school but is committed to her campaign: "This is my No. 1 focus right now," she says. "It consumes almost every thought in my body. I mean, it's like a full-time job."

Is she obsessed or just focused? "A healthy chunk of both," she says, laughing, adding that her mother helps keep her balanced. "Some days, she'll just be like, 'Melati, take a day off, like go to the beach with your friends and just don't pick up the plastic, just sit there.' " She is going to the beach — on Feb. 16, when Bye Bye Plastic Bags is planning its biggest beach cleanup ever.

An earlier version of this story incorrectly spelled three references to Melati and Isabel Wijsen's last name as Wisjen.