Accessibility links
Duke Prof Is Sorry For Urging Chinese Students Not To Speak Chinese. China Weighs In : Goats and Soda A professor sent an email instructing Chinese students at Duke to speak only English in certain campus buildings. An uproar and an apology followed. 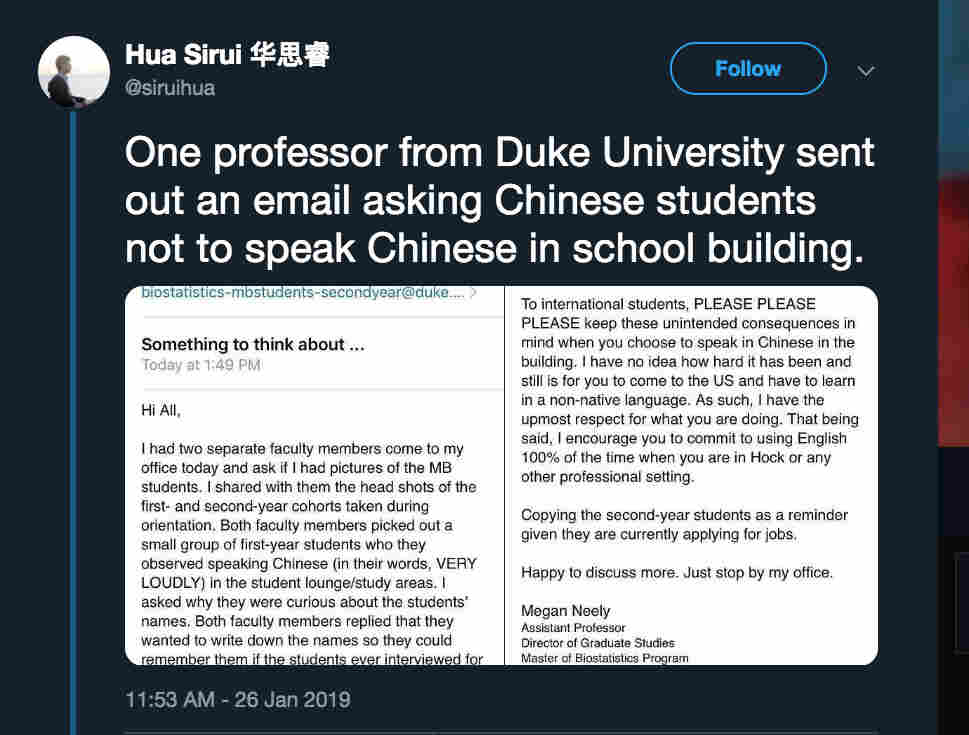 Megan Neely's email to Duke University graduate students in biostatistics was circulated in a tweet. @siruihua via Twitter/Screenshot by NPR hide caption 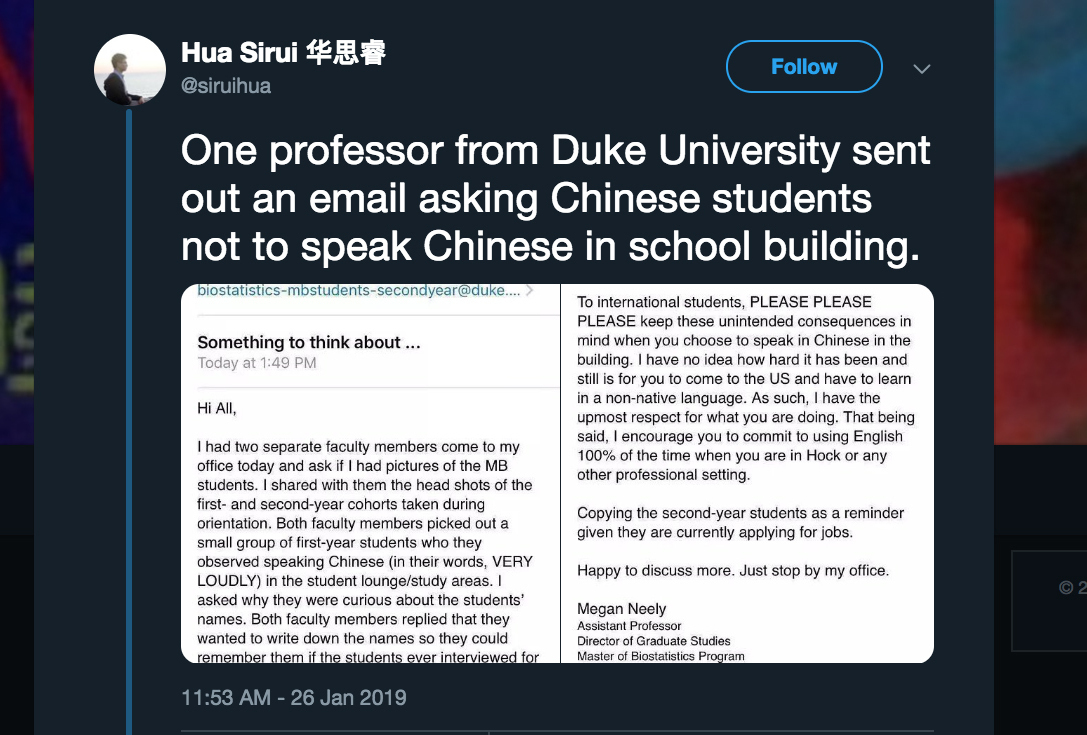 Megan Neely's email to Duke University graduate students in biostatistics was circulated in a tweet.

@siruihua via Twitter/Screenshot by NPR

A Duke University professor's email asking Chinese students not to speak their native language in the buildings that house the department of biostatistics has created quite a stir both in the United States and in China.

The email was sent by Megan Neely, director of graduate studies in the biostatistics. After two colleagues complained to her about Chinese students speaking their mother tongue "VERY LOUDLY in the student lounge/ study areas," she emailed first- and second-year biostatistics graduate students: "PLEASE PLEASE PLEASE keep these unintended consequences in mind when you choose to speak in Chinese in the building," the email read. "I have no idea how hard it has been and still is for you to come to the US and have to learn in a non-native language. As such, I have the upmost respect for what you are doing. That being said, I encourage you to commit to using English 100% of the time when you are in Hock or any other professional setting."

One professor from Duke University sent out an email asking Chinese students not to speak Chinese in school building. pic.twitter.com/6xGkIeScJo

On Sunday, Neely sent a follow-up email with an apology: "I deeply regret the hurt my email has caused." She has "asked to step down" from her position as director of graduate studies for the master's program, according to an email from Mary E. Klotman, dean of the Duke University School of Medicine.

But the apology has not put an end to the social media debate over her initial request.

The topic with the hashtag "Duke University professor who forbid students speaking Chinese resigned" has been viewed over 130 million times on Weibo, the country's equivalent to Twitter. Many Chinese found what Neely said discriminatory.

"This is utter racism," said a person on Weibo, who identified himself as a Chinese citizen studying in the U.S. "Why didn't she send emails to Indian and Latino students as well? They talk loudly in their own languages too!"

"Can I interpret this as America seeing our country as a big threat, as they feel culturally inferior than us?" posted another commenter.

In a briefing on Tuesday, the Associated Press reported that foreign ministry spokesman Geng Shuang took note as well: "If a Chinese university required that American students not use English to communicate, I think this would not be normal."

But some Chinese netizens weren't bothered by the email.

"I think it's a little overstated after I read her email. It does affect others when talking loudly. But actually, the professor was trying to encourage Chinese students to practice English more," one Weibo user commented.

"Chinese students should speak English more often and learn to blend into American culture, instead of hanging out with their Chinese peers all the time," said another.

A group identified itself as "concerned students" at Duke later drafted a petition, asking the university to conduct a "full-scale investigation into the actions of the two unnamed professors referenced in Dr. Neely's email" who had complained to her about the students speaking Chinese. The petition has had more than 2,000 signatures so far. The Asian Students Association and Duke International Association also issued a joint statement that condemned the email as "discriminatory" and "hypocritical," since the university presents itself as a "global university."

According to their statement, this was not the first time that Chinese students had been criticized for speaking Chinese. An email was sent to biostatistics graduate students in February 2018 warned students that failing to speak in English "may make it harder for [them] and future international students to get research opportunities while in the program."

The dean of Duke's School of Medicine has called for a "thorough review of the program" so they could "improve the learning environment for students from all background." Neely apologized in a joint statement with the chair of the department on Sunday, saying it's not meant to be hurtful, but it came out wrong.

The storm over the the Duke incident is not the only controversial note in the relationship between American universities and China.

The number of Chinese students studying in the U.S. keeps growing over the past decade. More than 363,000 students from China enrolled in U.S. colleges in the 2017/2018 academic year, accounting for 33.2 percent of international students in the country, according to a report by the State Department and the Institute of International Education – a significant source of income for many colleges.

China also has concerns about the impact of a Western education on its youth.

A Chinese student at University of Maryland said in a commencement speech: "I grew up in a city in China where I had to wear a face mask every time I went outside. However, the moment I inhaled and exhaled outside the airport, I felt free. No more fog on my glasses, no more difficult breathing, no more suppression." She ended the speech with this message, "Democracy and free speech should not be taken for granted. Democracy and freedom are the fresh air that is worth fighting for."

Her Chinese peers at the university denounced her for insulting their home country.

That makes the comment on one Weibo user all the more ironic: "The professor doesn't get to say what languages students can or cannot speak. Doesn't the U.S. value free speech?"