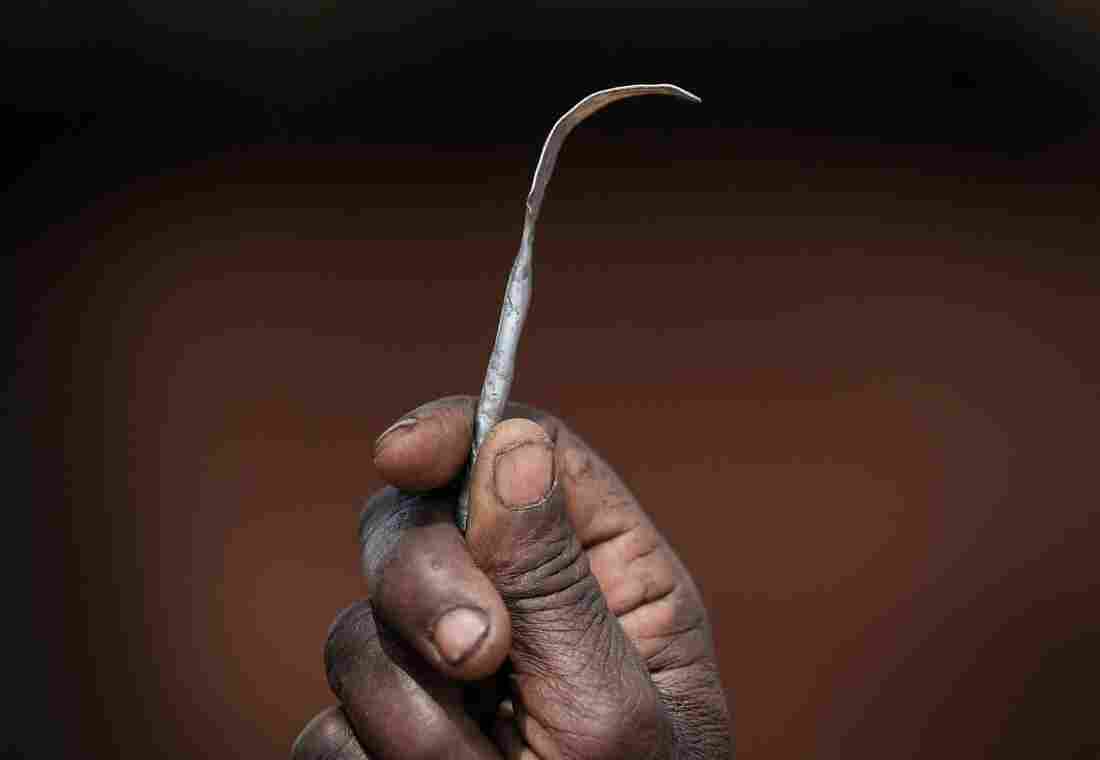 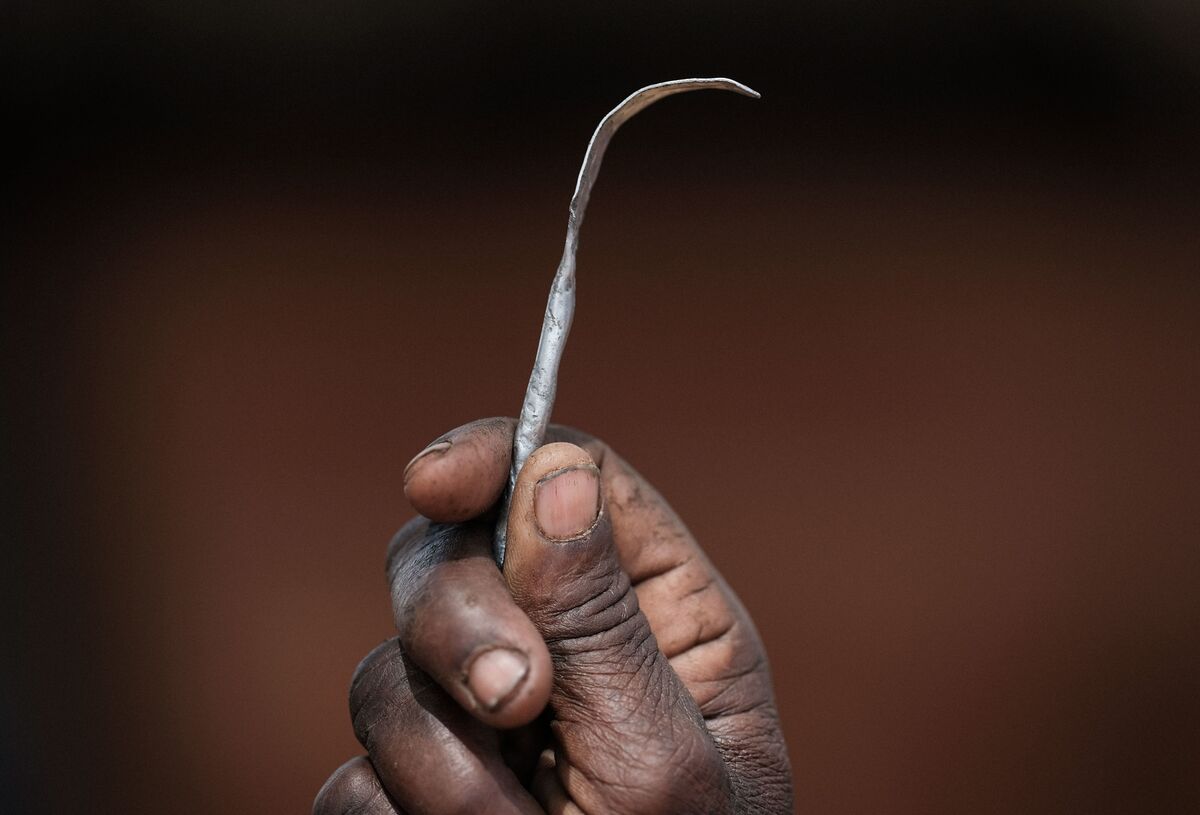 This homemade tool was used for female circumcision in northeast Uganda.

It's understandable that opponents of female genital mutilation (FGM) might feel discouraged as the new year gets underway.

"FGM cuts were conducted in broad-day light within Kween Town under the protection of panga-wielding youths," wrote Alain Sibenaler, the United Nations Population Fund (UNFPA) representative in Kampala, who answered questions from NPR via email. "This behavior encouraged communities to gather courage to openly undergo FGM in Kween whereas in [near-by towns] FGM is still conducted undercover."

Leaders of the local Sabiny culture were protesting the fact that FGM has been declared illegal in Uganda and sending a message that the practice of cutting is a way of protecting "our culture, our identity,"

Another FGM story that made headlines came from the U.K.: A 37-year-old woman from Uganda was convicted of performing FGM on her 3-year-old daughter in their north London home. It was the first conviction for FGM in the United Kingdom, where the practice is illegal as it is in Uganda.

As the world takes note of the ninth annual International Day of Zero Tolerance for Female Genital Mutilation on February 6, such stories make real both the persistence of FGM and the difficulties encountered by those working to eliminate it – in Africa, Asia and Latin America, where it typically occurs, but also in immigrant communities in Europe, North America and Australia.

The opponents of FGM note that the practice has no medical benefit and can cause medical harm and death due to infection, severe bleeding and damage to various internal and reproductive organs that could make childbirth hazardous.

This February the African Union is launching a campaign to eliminate FGM at its conference in Addis Ababa, The goal is to set up a mechanism for African countries to report regularly on their progress, making them accountable to the public and the international community, says Nafissatou Diop, coordinator of the UNFPA-UNICEF joint program on the elimination of FGM.

Diop points to more promising news: Over the past several months two announcements of major funding show "clear and important ... momentum to eliminate" practice by 2030, as called for by the U.N.'s Sustainable Development Goals, she says. One is the United Kingdom's recent pledge of 50 million pounds to help end FGM across the most affected areas in Africa.

The other is the European Union's commitment of 250 million euros for the U.N.'s Spotlight Initiative to eliminate violence against women and girls in Africa.

Even though the percentage of girls undergoing FGM is on the decrease, approximately 3 million girls worldwide remain at risk each year according to estimates by the World Health Organization. If the rate of FGM holds steady, the simple fact of population growth in high-risk countries will lead to an increase in the number of females affected — as many as 4.6 million girls at risk annually by the year 2030.

The persistence of the practice is reflected in the BMJ Global Health study finding that in Western Asia, between 1997 and 2015, the rate of FGM among children age 14 and under increased from 16.9 percent to 21.7 percent. In some communities in Indonesia and parts of Asia, says Diop, FGM is so ingrained, "that if you give birth to a baby girl in the hospital ... FGM is automatically offered as a medical service."

Indeed, FGM is part of the cultural practices of many communities. In some communities, FGM is considered a rite of passage for girls, without which they will be stigmatized and not considered suitable to marry.

In the Uganda cases, Sibenaler says the U.N. fact-finding team has reported that the practice of FGM is seen as part of their regional culture and identity.

And that presents a challenge to the campaign to stop the practice. "We may not have done enough in terms of ensuring genuine community ownership, i.e. listening to and understanding values and culture and then working with and through the community to explore solutions," Sibenaler explained.

"You cannot address FGM in a vacuum," says Erin Kenny, senior technical adviser for the United Nations Spotlight Initiative to End Violence Against Women and Girls. That means looking at "all the drivers" for FGM, she says, including its role in local beliefs and traditions, gender attitudes, even economic issues. Sibenaler pointed out that in the Sebei community, "Women 'cutters' do not have any other source of income."

As part of its campaign to stop the practice, Amref Health Africa has worked with communities in Kenya and Tanzania to develop alternative rites of passage – for example, baths of milk and honey. Some 16,000 girls have undergone these alternative rites, according to Amref.

The celebrations are developed by the communities themselves to fit their particular culture, says Peter Nguura, director of Amref Health Africa's End FGM/C Centre of Excellence, based in Nairobi. That's essential because in order to succeed, the alternative rites must be accepted by the community. "The key idea is to have the cultural leader give a blessing for the girls," he says.

The take-away for the future? Michelle Hindin, the Population Council's Program Director for Reproductive Health, is encouraged by the decline in prevalence rates, she wrote in an email. But more research is needed, and as effective as bans can be, they can also have unintended consequences of driving the practice underground.

But Diop remains optimistic. "There is a clear and important engagement and momentum to eliminate the practice of FGM," she says. "We are quite confident that if we continue accelerating our efforts then we will see the prevalence of FGM decreasing rapidly over the next 10 to 12 years."