Accessibility links
'Grandmother Hypothesis' May Help Explain Why Women Live Past Menopause : Goats and Soda Humans are evolutionary oddballs for living long past our reproductive prime. New research explains how grandmothers might be the reason why.

Living Near Your Grandmother Has Evolutionary Benefits

Living Near Your Grandmother Has Evolutionary Benefits 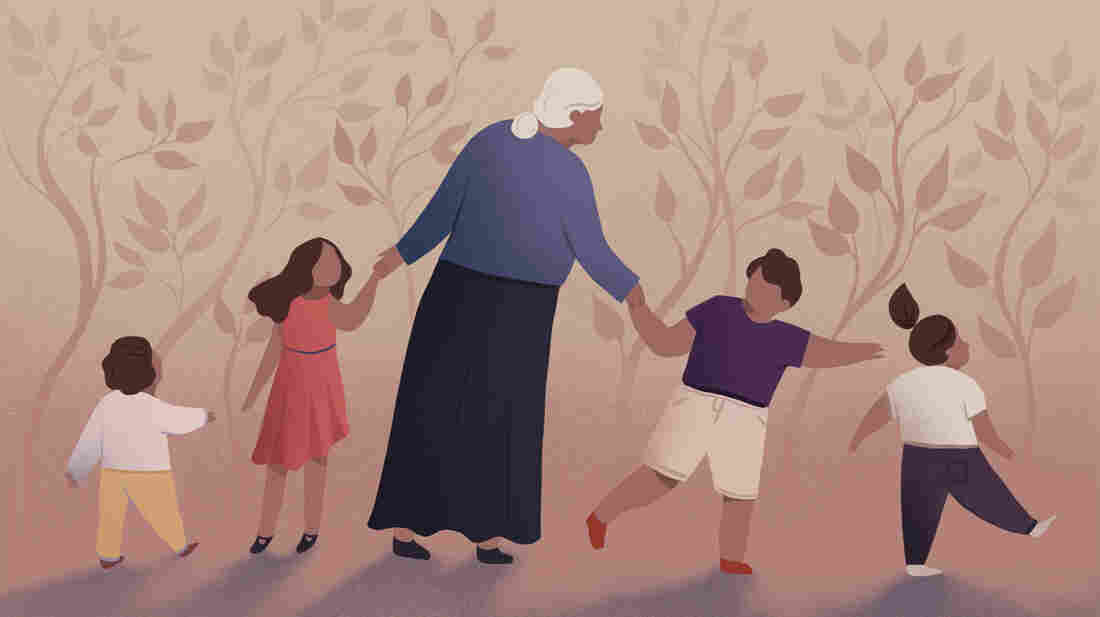 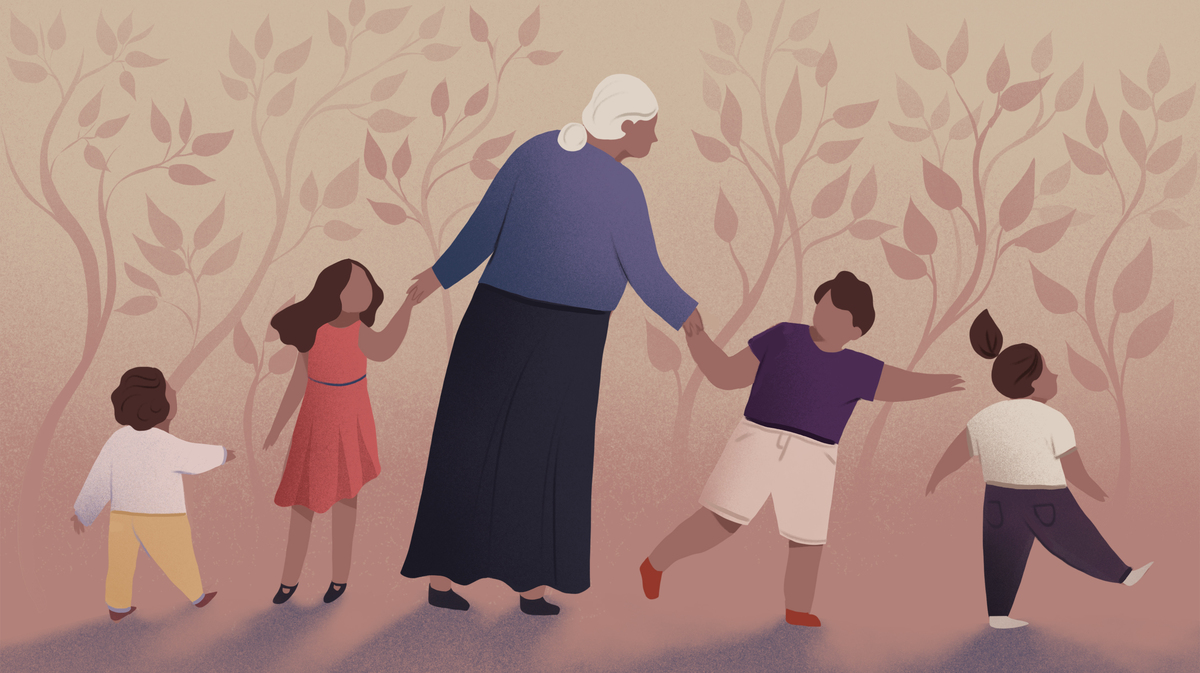 Killer whales, Japanese aphids and Homo sapiens — they're among the few organisms whose females live on long past the age of reproduction.

Since the name of the evolutionary game is survival and reproduction, the phenomenon begs explanation — why live longer than you can reproduce? In the 1960s, researchers came up with the "grandmother hypothesis" to explain the human side of things. The hypothesis is that the help of grandmothers enables mothers to have more children. So women who had the genetic makeup for longer living would ultimately have more grandchildren carrying their longevity genes. (Sorry, grandfathers, you're not included in this picture.)

Two studies published Thursday in Current Biology take another look at this hypothesis and add new insights into the role grandmothers play.

The first hard evidence for the grandmother hypothesis was gathered by Kristen Hawkes, an anthropologist at the University of Utah who was studying the Hadza people, a group of hunter-gatherers in northern Tanzania. Hawkes was struck by "how productive these old ladies were" at foraging for food, and she later documented how their help allowed mothers to have more children.

If our long post-reproductive lives evolved because of grandmothers, we should be able to find fingerprints of the benefits of grandmothering in many cultures. But the circumstances of modern life differ drastically from those we faced at the beginning of our evolutionary story.

The studies in Current Biology turned to the detailed records of two preindustrial populations, one in what is now Quebec and the other in Finland. The researchers mined these rich databases to quantify the reproductive boost that grandmothers provide and to help us better understand the limits of their help.

In 1608, French Catholic priests in what is present-day Quebec began recording every birth, death and marriage in their parish. As settlers continued to arrive, multiply and fill the St. Lawrence Valley, parish records ballooned. "We had the data set of the first French settlers coming off the first boat," says Patrick Bergeron, an evolutionary biologist at Bishop's University, who co-authored the study.

The population was mostly French and mostly farmers and was fairly mobile. That homogeneity helped the researchers isolate the effect of grandmothers and see if it mattered how close, geographically, a daughter was to her mother.

Hawkes explains that this approach adds nuance to previous studies of the grandmother hypothesis, which didn't directly measure proximity. "After all, if you're in Quebec but your grandma's in Cleveland, she may not be much help," she says.

Sacha Engelhardt, a postdoctoral researcher at the University of Bern who conducted research for this study at Université de Sherbrooke, looked for groups of sisters in which some left home and others stayed put. If being close to grandma helps, the homebodies should have had more kids than their adventurous sisters.

It turned out that staying close to grandma paid off in family size. Women who lived 200 miles from mom had, on average, 1.75 fewer children than their sisters who lived in the same parish as their mother. "Women in those days had a lot of kids, on average almost eight," says Engelhardt. But times were tough, and about half of a woman's offspring died before age 15. Such harsh conditions led to a range of reproductive success; the number of grandkids per grandmother in this database ranged from one to 195.

Being geographically close to grandma curbed child mortality too and allowed mothers to start having kids at a younger age.

Altogether, these results are what you'd expect if the grandmother hypothesis is true. "These results are really interesting," says Hawkes. "They took a much more fine-grained approach, and it gives us a clearer picture of the effect of grandmothers."

But if grandmas are so beneficial, why don't they live even longer — long enough to help their great-grandchildren grow up and have kids of their own?

To answer that question, you need to consider not only how much help a grandmother can give but also how the opportunity for a grandmother to help changes over time. If a grandmother's abilities deteriorate with age or if there just aren't as many grandkids around to help, the evolutionary benefits of living longer might disappear.

The second study, conducted by Simon Chapman, a Ph.D. student at the University of Turku in Finland, looked at a database of preindustrial Finns to answer this question. From 1731 to 1895, all births, deaths and marriages were recorded by the state. Finns moved around much less than the French settlers of the previous study, so most grandchildren lived close to their grandparents.

In Finland too, the presence of a grandmother boosted a daughter's total number of offspring. But closer inspection revealed some caveats.

The study shows that the opportunity for grandmas to help was not constant over the years. On average, a woman became a grandmother in her 40s, and the number of grandkids she cared for steadily rose, peaking in her early 60s and then diminishing into her mid-70s.

Why? Too many mouths to feed, according to Chapman. "At this time, paternal grandmothers often lived in the same home as their son and may have required extra care," he says. That may have shifted resources away from younger grandchildren.

Chapman says that together, these results help explain why selection has extended human lives past our reproductive prime, but only up to a point. Grandma can help when her grandchildren are growing up and she is likely in her 50s, 60s and early 70s. As both these studies demonstrate, grandmas can make a big difference in these years, and that reproductive boost helps push human life past the normal finish line of old age.

But as grandkids grow older, grandma's help doesn't have the same impact, and the evolutionary value of living much longer decreases. Chapman found that grandmothers' mortality rates shoot up just when this dip in opportunity for helping arrives.

Rosalyn LaPier is intrigued by the results of these new studies. She examines the benefits of grandmothers on a societal and cultural level. Currently a professor at the University of Montana who studies how indigenous cultures transmit knowledge, LaPier grew up on the Blackfeet reservation in Montana and spent countless afternoons with her grandmother learning about the land and plants that sustain their culture.

For most of human history, this kind of knowledge was transmitted orally. "In North American indigenous communities, you see the transmission of agricultural knowledge across generations," she says. "In many cases from grandmother to grandchild."

How did your grandmother help your family survive and thrive? And is there a piece of valuable advice she's handed down to you? Share your stories on Twitter. Pictures of you and grandma are welcome!