Accessibility links
Assessing Trump's State Of The Union Promise To End AIDS In America — 'And Beyond' : Goats and Soda The president's State of the Union address made a bold pledge. But his 2019 budget proposal calls for massive cuts to foreign assistance programs that address AIDS.

What It Will Take For Trump To End AIDS 'Beyond' America

What It Will Take For Trump To End AIDS 'Beyond' America 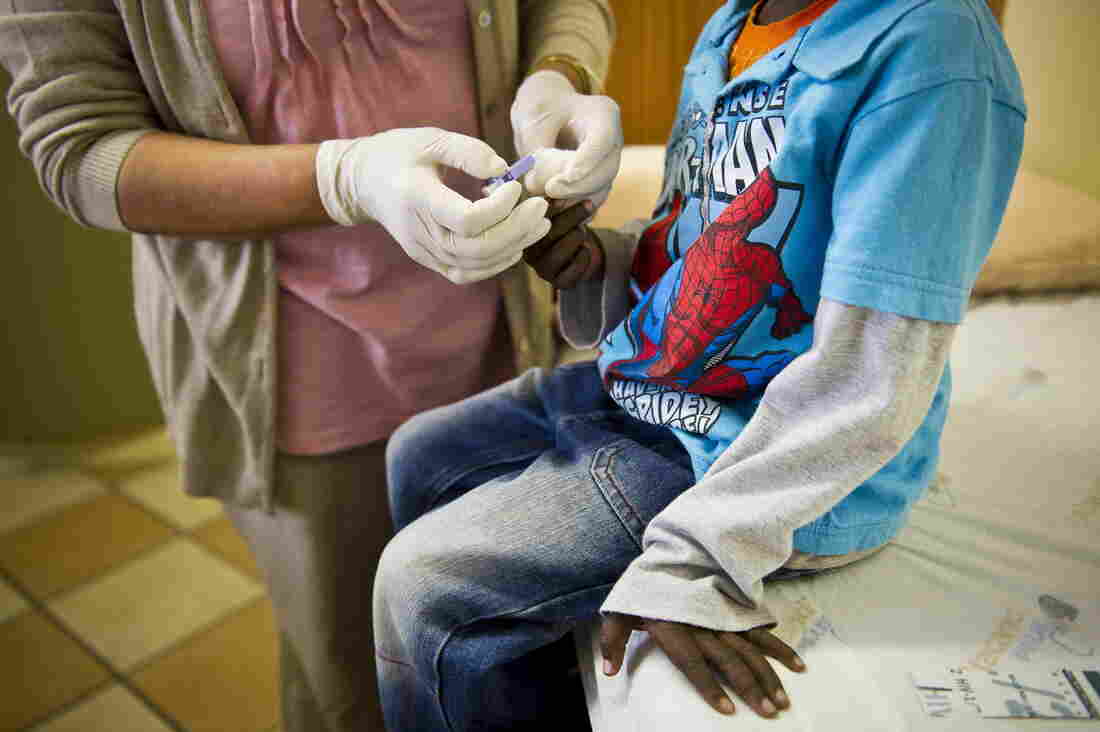 A staffer at the Right to Care AIDS clinic in Johannesburg administers an HIV test on a young boy. South Africa is one of the countries that receives funds from the U.S. President's Emergency Plan for AIDS Relief (PEPFAR). Gallo Images/Getty Images hide caption 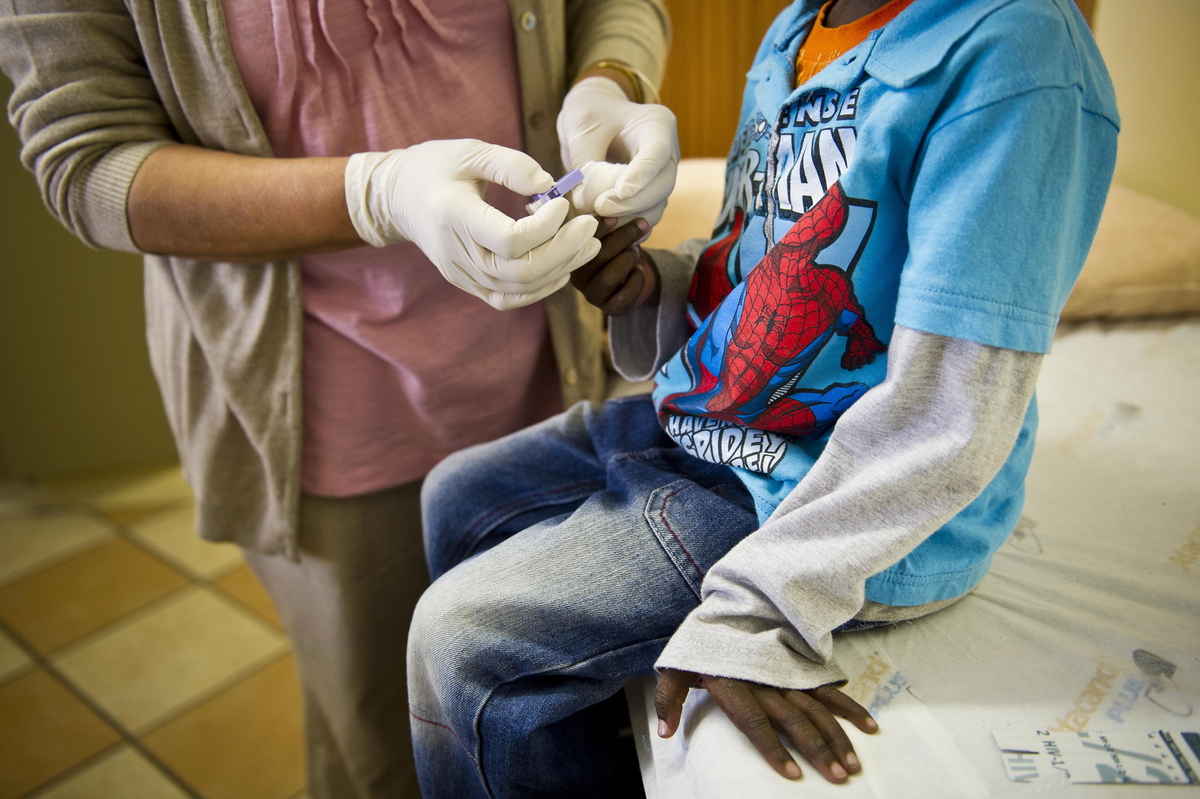 A staffer at the Right to Care AIDS clinic in Johannesburg administers an HIV test on a young boy. South Africa is one of the countries that receives funds from the U.S. President's Emergency Plan for AIDS Relief (PEPFAR).

When President Trump gave his State of the Union address last week, he made an ambitious promise to "eliminate the H.I.V. epidemic in the United States within 10 years." The announcement was followed by a blueprint from the Department of Health and Human Services that details the administration's plan to concentrate funding for treatment and preventative medicine in a few dozen counties nationwide with the highest rates of infection. Public health experts generally applauded the plan as achievable with existing tools and techniques.

The announcement also contained a second, less-noticed promise: To defeat AIDS "beyond" the U.S. But the president's own record on addressing the virus in other countries has been inconsistent.

In December, Trump signed a bill reauthorizing the President's Emergency Plan for AIDS Relief, known as PEPFAR, a flagship foreign assistance program that was initiated in 2003 by President George W. Bush and has grown to be one of the biggest and most successful public health interventions in history, responsible for saving millions of lives around the world.

But in his budget proposal for fiscal year 2019, released this time last year, Trump called for more than $1 billion in cuts to PEPFAR and the Global Fund, an international public-private partnership that is the world's biggest funder of AIDS treatment and prevention programs, part of a broader package of cuts to foreign aid programs of all kinds. Those cuts are still embroiled in the ongoing budget negotiations that have shaken the capital since the beginning of the year. Jennifer Kates, director of Global Health & HIV Policy at the Kaiser Family Foundation, says Congress is expected to reject Trump's proposal as early as this week, and keep funding for foreign AIDS programs at roughly its current level.

Still, Kates and other global health experts are concerned that much more funding is needed — an increase of $5.4 billion globally by 2020, according to a July report from the United Nations AIDS agency — to end the global AIDS epidemic by 2030.

Even maintaining the status quo for global AIDS programs will leave millions of vulnerable people around the world — and Trump's promise — out of reach, says Matt Kavanagh, director of the Global Health Policy & Governance Initiative at Georgetown Law.

"I'm deeply worried that they haven't had a change in thinking about [funding for global AIDS programs]," he says. "If the Trump administration wanted to get ahead of AIDS in other parts of the world, then it should find a billion dollars. It's worth noting how little of the total federal budget this is, and you could really transform these programs. But if you don't put the money in, then the [State of the Union] promise is deeply cynical."

The global fight against AIDS has made remarkable strides in recent years. According to the Kaiser Family Foundation, the number of AIDS-related deaths worldwide in 2017, around 940,000, was 51 percent below the peak of 1.9 million in 2004. New infections are declining significantly, while the number of people receiving treatment is rising. This progress is due to a confluence of factors, including better antiretroviral treatment that dramatically reduces the likelihood of HIV transmission; more widespread access to testing, condoms and preventative medication; and social programs aimed at improving women and girls' education and reducing the stigma around AIDS. U.S. spending on PEPFAR and the Global Fund, which has totaled more more than $80 billion since 2003, has been the financial bedrock of that effort.

But today, progress on confronting the global AIDS epidemic risks becoming stuck in a rut due to a lack funding to expand programs that have proven to be effective, the UNAIDS report found. $20.6 billion was made available for AIDS programs in low- and middle-income countries in 2017, short of the $26 billion the report says is needed in the next few years.

Of the $20.6 billion, more than half was contributed by the affected countries, with the rest made up by contributions from the U.S. and other donors. In a statement, UNAIDS chief Michel Sidibé called the situation "a funding crisis" and said "we cannot afford any cuts in international assistance to the AIDS response."

The report also found that the best comprehensive treatment and prevention services were "limited almost exclusively to a handful of high-income cities and the districts within eastern and southern Africa that have served as innovation incubators for researchers, national programmes and international donors."

In other words, the report found, public health workers have solutions that work but haven't been able to scale them up, leaving some vulnerable areas underserved and poised for a resurgence of the epidemic. A World Health Organization report in December found that the rate of HIV infection in Eastern Europe is growing faster than ever, largely due to a lack of preventative resources for high-risk individuals including sex workers, injection drug users, and gay men.

"If you don't stay ahead of an infectious disease, it just spreads, and we're falling further and further behind," Kavanagh says.

Kevin Osborne, executive director of the International AIDS Society, says it's also important for the president to look beyond PEPFAR and consider how his positions on other social and foreign policy issues may impede progress on confronting the AIDS epidemic.

On his first day in office, Trump reinstated the so-called "global gag rule," which blocks federal funding for international organizations that provide access to or information about abortion, even though such clinics may also offer HIV services. In 2017, the administration ended funding for the U.N. Population Fund, which provides family planning services around the world, over concerns that the agency was supporting abortion services in China, despite evidence that access to family planning can reduce HIV transmission. In October, HHS, the same federal agency tasked with managing the HIV crisis, moved to advance a legal definition of gender that could endanger civil rights protections for transgender Americans, a group that is highly vulnerable to HIV. And just the day after the State of the Union, the Justice Department sued to block a group in Philadelphia from opening a supervised opioid injection site, despite evidence that such facilities can reduce disease transmission.

Beyond the issue of funding, such actions could send counterproductive signals to countries around the world where HIV-vulnerable people avoid treatment or testing because the infection is still highly stigmatized, Osborne says.

"We can't separate HIV from stuff like education, comprehensive sex education, and reproductive rights," Osborne says. "We know those things are going to keep people HIV negative. It doesn't stop an epidemic if you ignore key parts of the at-risk population for other reasons."

Still, Kavanagh says, the administration's new domestic policy — tapping the enormous trove of public health research to focus resources on the most vulnerable areas — mirrors the approach needed at the global level, if more funding is made available to refocus on emerging hotspots.

"The strategies are the same," he says. "We have more and more data on where transmissions are happening. But there's no money to expand, so we end up really losing ground."

President Trump is due to announce a new budget proposal for fiscal year 2020 by March, and Kates says public health experts will be scrutinizing it closely to see if it matches his promises on AIDS.

"The epidemic is definitely not over globally," she says. "There's a lot more work to be done."