Accessibility links
What Do Humanitarian Groups Do With Surplus Supplies: Donate Or Sell? : Goats and Soda FEMA is now auctioning off trailers sent to Texas in the wake of Hurricane Harvey. But that's just one way to deal with a surplus.

From Trailers To Tents: What Happens To Leftover Aid Supplies?

From Trailers To Tents: What Happens To Leftover Aid Supplies? 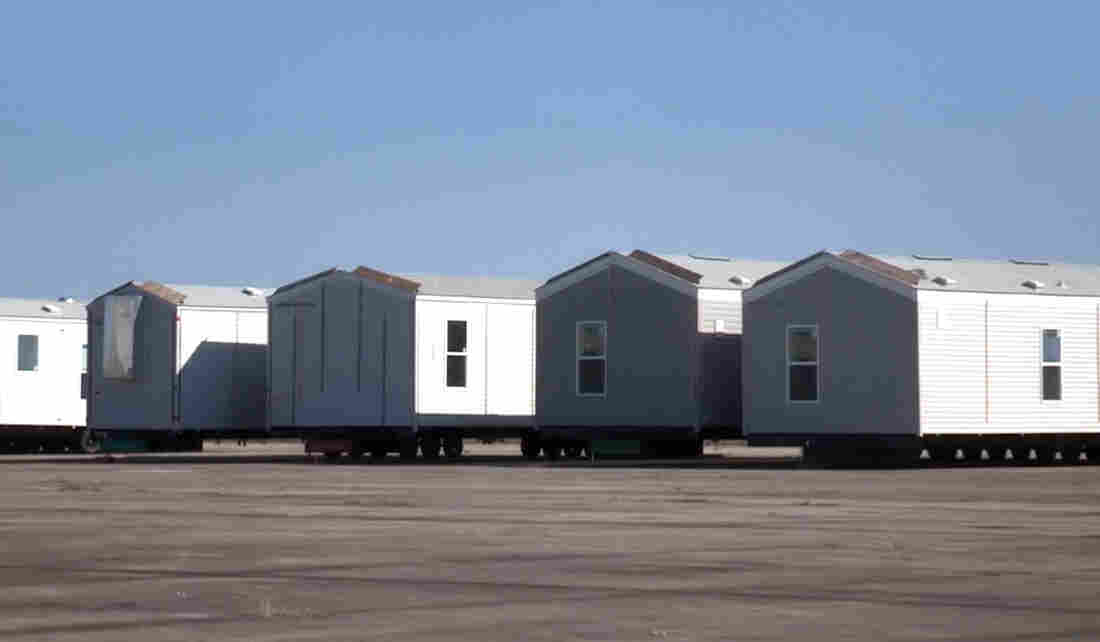 FEMA is planning to sell off hundreds of surplus trailer homes in Texas through a General Services Administration auction.

The Federal Emergency Management Agency sent the trailers for temporarily homeless families after Hurricane Harvey struck in August 2017. But not all of them were used. Now surplus trailers are being auctioned online to the public with a minimum bid of $100 for trailers that range from 1 bedroom units, valued at $57,354, to 3-bedroom units with a value of $70,965.

Even though some of the funds go back to FEMA for future housing missions, this practice has been criticized (more on that later).

And it brings up the question: What happens to surplus humanitarian aid?

Bassam Michel Ibrahim, head of global logistics for the Norwegian Refugee Council, an international aid group, says that a surplus of humanitarian supplies should be a rare occurrence. In his experience, relief organizations are consistently up against a lack of funding and a lack of supplies.

According to Ibrahim, aid missions usually go through an intense planning process to ensure that all supplies are delivered and used as intended. This detailed process allows aid groups to report to their donors exactly how their money is being used, and it means there are almost never leftovers.

If there is a surplus, Ibrahim says it's usually because problems arise that are outside of their control – like conflict breaking out or a landslide cutting off the only road to a village – that prevent them from delivering the aid.

Guillaume Brumagne, a logistics supervisor at Doctors Without Borders, says that the medical aid group deals with leftover supplies on a regular basis because their teams bring a lot of items – including drugs, medical equipment and shelters – when they arrive in a country to address a health crisis. Once the crisis is over and it's time to scale down, they must figure out what to do with what's left.

"The general rule within [Doctors Without Borders] is always to try to see how can these items benefit another partner within the country," says Brumagne.

Brumagne says that whether the item is a used tent or unused medical equipment, they try to donate it to a similar actor in the area – possibly the ministry of health, a local health clinic or another medical charity. If they can't find someone in the medical field who can use the item, they donate it in a way that still helps the local population. For example, Doctors Without Borders has donated tents to create more classroom space for schools.

The one thing they try to avoid is giving supplies to someone who will then sell them.

"The foundation of what we do is bringing aid to people that is completely free, accessible and without any kind of discrimination," Brumagne says. "Even if in the end we don't use the aid ourselves, we want to find a way for it to benefit the people it's supposed to benefit, without them having to pay for it."

Both Ibrahim and Brumagne say they've never seen a reason to sell aid instead of donate it.

"Why would we?" says Ibrahim. "There are always more needs than we are able to meet."

Other aid agencies, including those that are part of the U.S. government, also try to donate surplus property from disaster relief efforts. But in some instances, as in Texas, arms of the U.S. government do sell things off. In fact, there are official channels for them to do so, whether the excess supplies are trailer homes, tents, office supplies or other items. According to the U.S. General Services Administration (GSA), federal agencies may sell unneeded property to the public through GSA's auction system if no other government agencies or qualified voluntary organizations are interested in it.

The official policy FEMA sent NPR says that when the agency's trailer homes are deemed "unsuitable for disaster survivors elsewhere," FEMA can either put them up for auction or sell them to the current occupants.

In the wake of Hurricane Harvey, FEMA was criticized for selling trailer homes at "cut-rate prices after 18 months of use or the first sign of minor damage." Since then, the agency has said they sell mobile homes at an "adjusted fair market value," not cut-rate prices or for pennies on the dollar. In an email to NPR, FEMA explained that "units are deactivated when they do not meet the agency's standards for survivors." FEMA also noted that they cannot "control the market and at what price they are auctioned."

Although the U.S. government does sell certain disaster-relief supplies, regulations prohibit the sale of government-issued military and humanitarian meal rations. So if you see them offered by an online retailer, for prices like $100 for a case of 10 meals on eBay, they're likely being sold by the recipients themselves by the company that makes them.

Janet Nelson, who co-owns TheEpicenter.com – an Oregon-based company that sells emergency supplies – says her company only carries overstock humanitarian daily rations from manufacturers. When the government doesn't purchase the entire order placed with a manufacturer, the manufacturer repackages the kits for civilian use and sells them to dealers like Nelson's company. She says the last time they sold humanitarian daily rations was right after Hurricane Katrina.

And then there are the reports that FEMA tents were used at the failed Fyre Festival – a luxury music festival held on a Bahamian island in April 2017 that quickly spiraled into an epic fail, from lodging to meals to security.

The mainstream media and social media widely reported that leftover FEMA disaster-relief tents were the accommodation for festival-goers, who spent thousands of dollars to attend.

That claim is repeated in two new documentaries about the festival.

But that's not the case. Clay Kimsey, a sales representative for the manufacturer (Shelter Systems) says the tents were purchased brand-new through a third-party vendor that was "not any type of humanitarian group."

"Yes, those were our structures," he says, and they have on occasion sold their tents to relief organizations and government agencies. In the case of the Fyre Festival, they were sold for recreational use at an event that turned out to be a disaster.

After this story was published, FEMA provided additional information regarding the process of auctioning off surplus trailers. We have clarified the details.