Accessibility links
'Period. End Of Sentence' Wins Oscar. Menstrual Health Experts Are Ambivalent : Goats and Soda The documentary plays on the catch phrase: "A period should end a sentence — not a girl's education." But is it really true that lack of menstrual pads is causing girls to drop out?

A 'Period' Movie Won The Oscar! So Why Are Some Menstrual Health Experts Ambivalent?

A 'Period' Movie Won The Oscar! So Why Are Some Menstrual Health Experts Ambivalent? 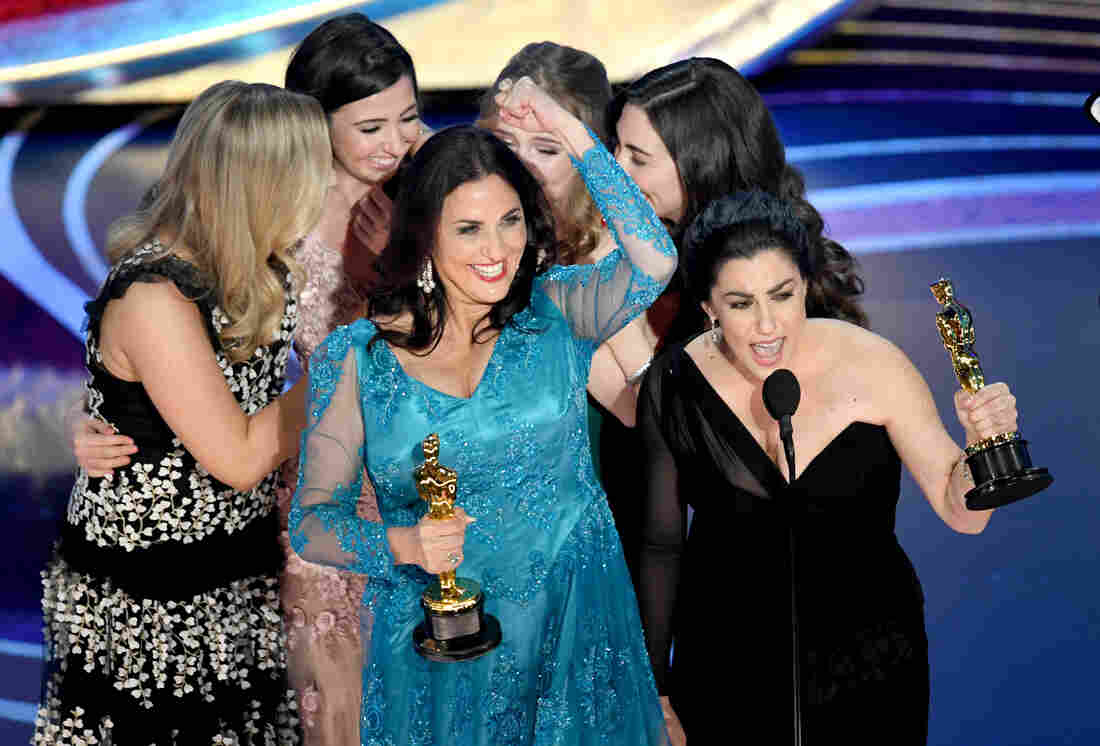 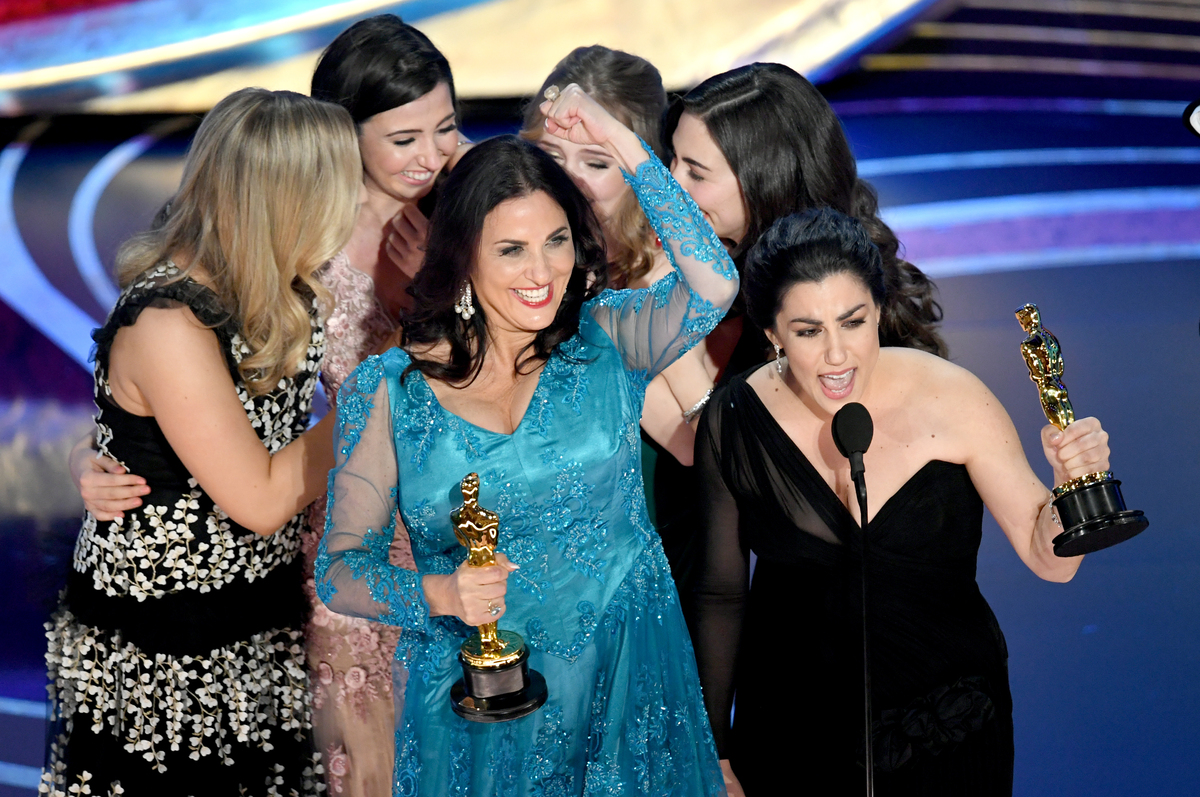 The award last Sunday night went to Period. End of Sentence, a 26-minute film that profiles women in an Indian village who band together to manufacture affordable menstrual pads.

Sommer, a professor at Columbia University, is one of a small group of public health scholars who for years have been trying to convince fellow researchers and policymakers that the fact that many poor women lack access to menstrual products and hygiene is a serious problem. (For a sense of how lonely Sommer's crusade was during the early years you can read this NPR piece.)

So Sommer says the tone of her colleagues' emails was largely "just utter delight that [menstrual hygiene] had achieved this level of awareness-raising and attention." And on that point, she adds, "I one hundred percent concur. I've got a colleague who for two decades has been saying, 'We've got to break the silence around menstruation.' And I wrote her, 'Well, I think we've smashed it.' "

But the joy has been tempered by some nagging concerns – particularly around the movie's catch phrase – proclaimed by producer Melissa Berton as she signed off her acceptance speech: "A period should end a sentence — not a girl's education."

"As beautiful as that quote is," says Sommer, with a sigh, "in terms of the evidence, I don't think we're that far along." That's because to date no one has actually done a rigorous study demonstrating that girls' difficulties managing their periods are leading them to miss class — let alone drop out of school.

To be sure, as girls in poor countries reach puberty, substantial shares leave school – either by choice or because their families pull them out. Also, in a series of small, focus-group style studies in a range of countries, girls have reported that they lack adequate menstrual hygiene supplies. And says, Sommer, girls have reported "that this is one of many issues that makes engaging in and participating regularly in school problematic."

But that's a far cry from proving that the barriers to menstrual hygiene are causing educational harm – for example that, as a result, girls are forced to skip class or that they drop out altogether.

And Sommer notes that there are plenty of other possible explanations for why so many girls stop their schooling at puberty. Their families may believe it's now time for them to get married. Or the parents might worry that once a girl reaches her teens, spending time outside the home could lead her into a relationship in which she gets pregnant. Or, often the girl drops out because she has gotten pregnant.

It's also possible that the challenges around menstrual hygiene are one of a constellation of factors that combine to end a girls' education. That, as Sommer puts it, "it's one more thing that makes going to school difficult" – and therefore can tip the scales in favor of dropping out.

Which explanation is correct? "I would say it's an excellent question," says Sommer. Unfortunately, when it comes to mounting research studies that could answer it, "the funding just hasn't been there."

Sommer has been trying to change that. In fact, she's organizing a meeting in Geneva in March for scholars and policy makers from disciplines ranging from adolescent health to education to sanitation infrastructure. They will review the existing evidence around menstrual hygiene challenges and lay out specific gaps that researchers could fill.

She's also looking forward to the results of a study currently underway in Kenya led by Penelope Phillips-Howard of the Liverpool School of Tropical Medicine in the United Kingdom. That study is testing whether providing girls menstrual cups (an alternative to a pad) can extend the number of years they stay in school. (A similar study in Uganda suggested it can – but those findings also came with significant caveats. For instance, more than half of the girls in the study turned out to be too young to get their periods.)

Yet even as Sommer argues for the necessity of such studies, she's ambivalent about what they imply. That's because of a second quibble she and some of her colleagues have with the "a period should end a sentence – not a girl's education" trope: It suggests that menstrual hygiene is only worth addressing to the extent that it impacts education.

Sure, says Sommer, if studies do end up showing a link, that will be helpful in making the case to governments and donors that they should address menstrual hygiene barriers. But even if it turns out there isn't much of a connection to educational outcomes, being able to manage your period "is a human right," says Sommer. "We shouldn't have to justify that girls are deserving of an environment where they can just meet their basic bodily needs."

Lastly, Sommer is disappointed that the recent surge of interest in menstrual hygiene – as exemplified by the documentary — has "this intense focus on pads as the solution. This idea that if we just provide pads we're going to solve the problem."

She points to many other barriers to managing periods in school that could be equally or possibly more serious: Many schools lack running water to wash your hands and toilets with doors you can lock for privacy.

"The studies out there are not looking at toilets," Sommer laments. "Somehow, no one finds toilets sexy."

Then there's the problem of teachers who are unaware and even insensitive to girls' needs. And the dearth of education for girls about menstruation and how to manage it.

"Providing girls with a product can only get you so far if you don't have the enabling environment in the school, supportive teachers and information about what's happening to your body," says Sommer.

Also crucial to address, she adds, is the way many cultures stigmatize menstruation to the point that girls are unable to talk about it and even forced to isolate themselves when they are menstruating. "I was just in Nepal and seeing the way girls [who are menstruating] are not able to go into temples, not able to cook, was really profound," she says. "There are these immense restrictions around girls' lives that have become normalized."

Period. End of Sentence does at least touch on this last point, says Sommer. And she's hopeful that the result will be to prompt deeper examination and unpacking of the prejudices animating such attitudes.

"The benefit of this movie is that it opens the conversation," she says.

And who knows, maybe someday someone will even make a movie about toilets for girls. "Well, probably not," adds Sommer, laughing. But a researcher can dream.