Accessibility links
Doctors Without Borders Suspends Operations In Ebola Epicenter In Congo : Goats and Soda After two fiery attacks on its treatment centers in Democratic Republic of the Congo, the medical charity is putting its operations there on hold — and rethinking its role.

Listen · 2:54 2:54
Why Doctors Without Borders Is Suspending Work In The Ebola Epicenter In Congo 2:54 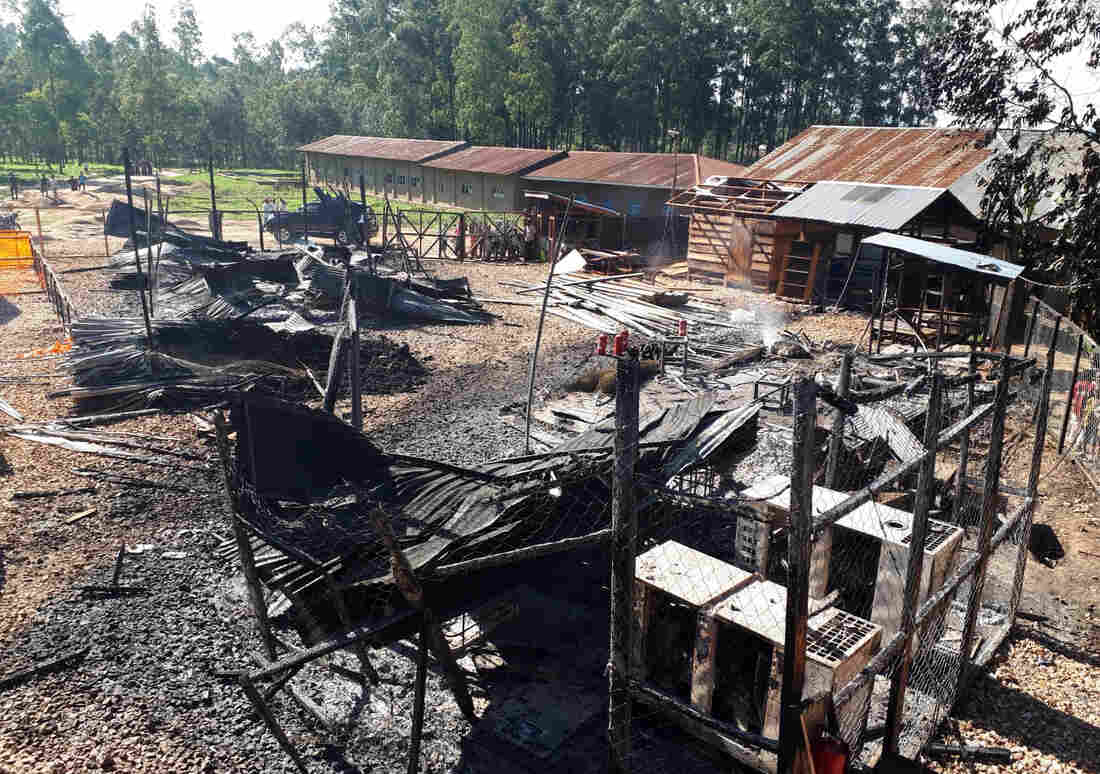 Assailants set fire to an Ebola treatment center run by Doctors Without Borders in Katwa, a rural suburb in Democratic Republic of the Congo, on February 25. Lauris Bonnaud/Reuters hide caption 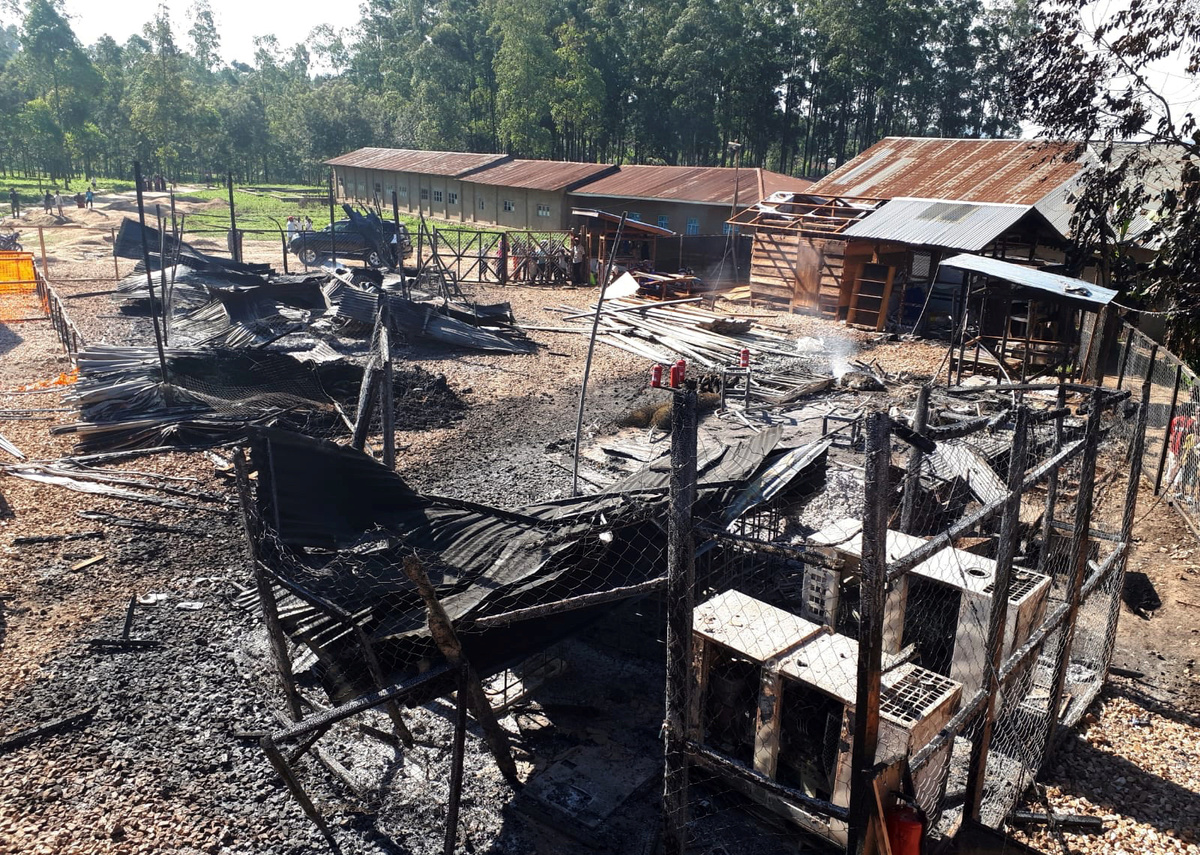 Assailants set fire to an Ebola treatment center run by Doctors Without Borders in Katwa, a rural suburb in Democratic Republic of the Congo, on February 25.

The aid group Doctors without Borders is suspending its work in the epicenter of the Ebola outbreak in the Democratic Republic of Congo. The move comes after two separate attacks on its treatment centers there. The organization says, at best, it will be weeks before it returns.

"When I send my teams I need to be sure that they are going to come back alive," says Emmanuel Massart, the on-the-ground emergency coordinator for Doctors Without Borders in the region. "The attacks were really, really violent."

Somewhere between 20 to 100 men converged on the group's treatment center in a rural suburb called Katwa.

"They started to throw stones. And then they started to put part of the center on fire – where we had all the logistical and water and sanitation equipment. And then ... the triage center and the cars."

After about 15 minutes the attackers scattered. But the center was already in ruins.

The next attack was on Wednesday night — at a treatment center seven miles away, in a city called Butembo. This time the assailants were even more brazen.

The gun battle lasted about 30 minutes. One officer was killed.

At the time, there were several dozen patients at the center who were suspected or confirmed to have Ebola. Many of them just picked up and ran.

Massart arrived on the scene soon after and says everyone was traumatized. His colleagues told him, "You are afraid for your life. You feel completely helpless."

Officials of the World Health Organization say several patients are still at large. The rest have been moved to a center in Katwa operated by another international charity, called Alima. The facility was originally a transit center to house people suspected of Ebola until they could be moved somewhere else for treatment. But the government and WHO are working with Alima to equip it to offer the full panoply of care.

The need is great. Katwa is the newest hot spot in this seven-month-long outbreak, with more than 200 new cases in recent weeks that bring the overall total in Congo to nearly 900 cases.

Massart says despite this dire prognosis, Doctors Without Borders will not return until it can be sure there will be no more attacks.

Requesting protection from the Congolese police or military or even United Nations peacekeepers is not an option, he says.

"It's a general principle of Doctors Without Borders that if you accept the protection of one side you will be the target of the other," he says.

Instead, the group maintains that the best way to stay safe is to make sure you win the support of the community. "Normally, the population understands that you are doing something good for them, so they will protect you," he says.

And while it's not yet known who the assailants were in the two attacks, Massart says the larger takeaway is clear. In Katwa and Butembo, "there is a level of mistrust that we have to correct very, very quickly."

He adds that it's not surprising. Katwa and Butembo are in an isolated, impoverished area with a history of armed conflict that's made people wary of — and sometimes even hostile to — outsiders.

Add to this the fact that Ebola is a disease that has never reached this region before and that at first blush doesn't seem all that different from more familiar diseases.

"At the beginning you will have the same symptoms as malaria or typhoid fever – things that the communities are used to dealing with. So Ebola is seen as a disease like the other ones, and they don't see why we should put people in treatment centers."

After all, malaria can be deadly too. But there have never been foreign medical workers insisting that as soon as a family member shows signs of it you need to send them off to a bunch of strangers in plastic suits.

This mistrust has serious consequences beyond the attacks. Because people aren't coming forward for treatment, a very high share are dying of Ebola in their communities. And at that end stage of the disease, they are at their most contagious.

Doctors Without Borders and other groups have done some work educating communities about Ebola. But the approach has been too top down, says Massart. Instead, "we should have involved the community in the decision making."

For instance, he says, instead of simply erecting the Ebola treatment center in a location chosen by the government, "we should have gone to the community and said, 'Where do you think we should put it?' "

The failure to consult the local population seems surprising given that Doctors Without Borders has a long history of treating Ebola in areas where there's been community resistance. And the Katwa center was opened in January, long after numerous other episodes of violent resistance in earlier hot spots of the current outbreak.

Massart says part of the problem is that there are so many different groups involved in the response – and each one handles different aspects.

"We are very known for patient care, and that's where we have been put," he says. "There were other people that were in charge of community engagement and communication. So we didn't do it ourselves because it was supposed to be done and done well [by others.] But unfortunately it was not."

Now he says, Doctors Without Borders is rethinking its role. The group will continue to provide patient care in other less violent areas of the outbreak.

But in Katwa and Butembo, he wonders: "Is patient care where we will have the biggest impact? Or should we put more forces in community engagement?"