Accessibility links
China Isn't Recycling Tons Of U.S. Plastic Trash Anymore : Goats and Soda Last year, China drastically cut back its imports of plastic waste to recycle. Now the U.S. and other wealthy nations must figure out what to do with their discards. 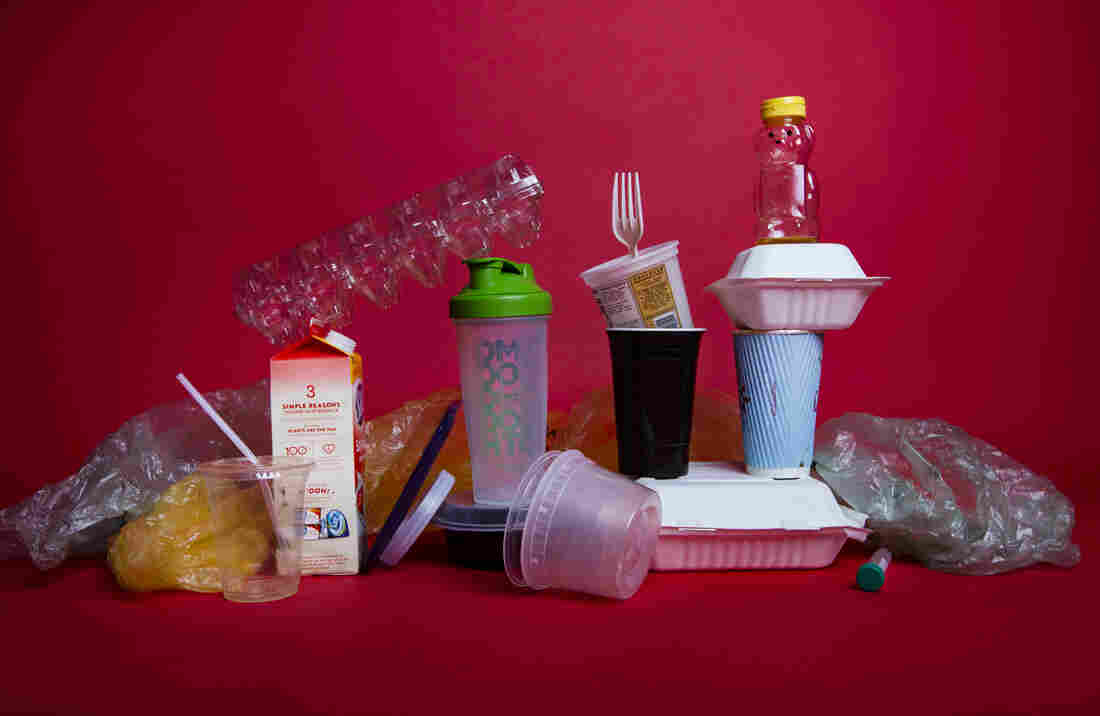 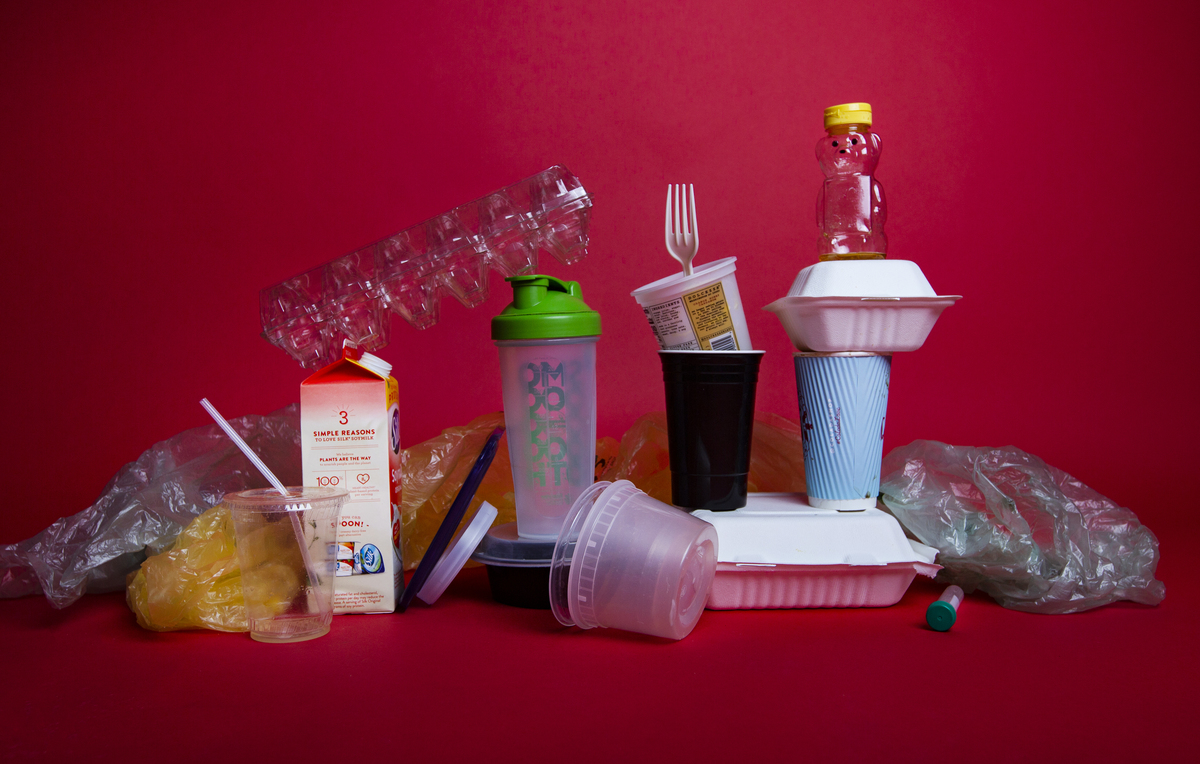 The U.S. used to ship about 7 million tons of plastic trash to China a year, where much of it was recycled into raw materials. Then came the Chinese crackdown of 2018.

Plastic garbage from Trader Joe's and an AARP card are peeking out of hillocks of plastic trash piling up in Indonesia.

It's a sign of a new global quandary: What should wealthy countries do with their plastic waste now that China no longer is buying it?

For years, America sold millions of tons of used yogurt cups, juice containers, shampoo bottles and other kinds of plastic trash to China to be recycled into new products.

And it wasn't just the U.S. Some 70 percent of the world's plastic waste went to China – about 7 million tons a year.

Numerous Chinese millionaires were minted as recycling businesses started and blossomed. Sure, they paid for the world's plastic and paper trash, but they made far more money from processing it and selling the resulting raw materials.

About 'The Plastic Tide'

NPR is exploring one of the most important environmental issues of our time: plastic waste. Click here to read more about the topic.

But last year the Chinese government dropped a bombshell on the world recycling business: It cut back almost all imports of trash. And now a lot of that plastic gets shipped to other countries that don't have the capacity to recycle it or dispose of it safely.

To understand the current situation, we have to go back in time a couple of decades.

A billionaire is born

Martin Bourque runs one of the oldest recycling operations in the U.S. as part of the Ecology Center in Berkeley, Calif. "There were brokers going around the globe buying up every scrap of plastic they could find and paying top dollar for it," he says.

And there was this brilliant tactic to increase profits: West Coast ports in the U.S. were full of empty Chinese shipping containers that had come to deliver goods to American consumers. "So it made a lot of sense to send [waste] out though the port in an empty ship that was going back anyway," Bourque says.

For American recyclers, it was too good a deal to pass up. Many types of plastic — bags, cups, plastic wrap, thin film — gum up sorting machines at materials recovery centers in the U.S. and is of almost no value to recyclers.

Waste expert Joe Dunlop at the Athens-Clarke County materials recovery facility near Athens, Ga., explained the problem. Conveyor belts deliver tons of trash every hour, with magnets diverting metal and paper going into bins for recycling. Some plastic is binned up, too, if it's recyclable — bottles, for example. But the rest, like a box covered in film plastic — thin flexible sheets of plastic — is not easy to recycle.

He pulls up a 2-foot-square piece of cardboard out of a 10-foot-pile of trash. "A cardboard box wrapped in our No. 1 contaminate, film plastic," he says. "That's just bad. What is so awful about a cardboard box that they had to go and do this to it?"

The cardboard/plastic combo originally held beverages, he says, "but have you ever had to unpackage containers? It's a pain in the butt."

Dunlop says a lot of that plastic is useless when it comes to recycling in the United States. It mostly ended up in landfills until China came along.

China had plenty of capacity to handle plastics and lots of cheap laborers to sort the recyclable materials from the nonrecyclable. By 2016, the U.S. was exporting almost 700,000 tons a year to China alone. Overall, China imported 7 million tons from around the world.

About five years ago, the Chinese government started to worry about all this trash coming in. A lot of the plastic was contaminated with stuff that made it difficult and expensive to recycle – paper, food waste, plastic wrap (which is not recyclable). And some of the plastic was hard to recycle and thus not profitable to import.

What's more, a lot of plastic sneaked in illegally, without permits. These fly-by-night recyclers dumped stuff they couldn't recycle, causing pollution on land and in waterways.

In fact, Bourque actually tracked some of the plastic scrap from his operation in Berkeley. In 2016, he buried a GPS transponder in one of his bales of paper and plastic waste from the Ecology Center. Waste brokers bought it. He followed the transponder's electronic signals to a town in China. Bourque then contacted local residents to document what happened to it. They reported to Bourque what they saw.

"And what we found confirms some of our worst nightmares: dumping in the local canyon of materials they couldn't recycle, plastic in the farmland incorporated into the soil of the cornfields nearby," he says.

So the Chinese government cracked down.

In 2017, the government started to cut way back on plastic trash imports. Then the big bombshell: In January 2018, it banned almost all imports. Last year, China took in less than 1 percent of its 2016 total.

That means a huge amount of plastic is looking for a place to go. Especially, says Bourque, in the Western U.S., where communities depended heavily on the Chinese trade.

"A lot of it is being stockpiled," he says. "You know, people who have warehouse space." Many communities — like Eugene, Ore. — temporarily stopped collecting things like yogurt containers and shampoo bottles that used to go to China.

Keefe Harrison runs a nonprofit called the Recycling Partnership that works to improve recycling rates. She says more plastic in the U.S. is now ending up in landfills or getting incinerated, which creates pollution. And she says the confusion is discouraging to consumers. "It's very hard to turn recycling on and off," she says. "You can't tell your citizens 'Today we're not recycling any more, but next week we'll start again.' "

Harrison says if recyclers in the U.S. are going to pick up the slack, they need help. For one thing, they need more good, valuable plastic — bottles and tubs like the ones detergent comes in, for example, that are easier to recycle into raw plastic they can resell in the U.S. "The truth is that only half of Americans can recycle at home as easily as throwing something away," she says. "So that's step one that we have to fix."

Meanwhile, shipments of plastic waste to other Southeast Asian countries have skyrocketed. Exports from the U.S. to Thailand jumped almost 7,000 percent in one year. Malaysia's went up several hundred percent. Those numbers dropped in 2018 after those countries cut back on imports.

Stiv Wilson is an environmental activist and documentary filmmaker who works with a project on waste called The Story of Stuff. He has also been working with an environmental group called Ecoton in Indonesia, another big importing country. Wilson visited a town near a recycling plant in the city of Surabaya. The plant takes paper bales mixed with plastic.

"That plastic gets separated by the paper factory," he says. "It gets dumped in the neighboring community, and then the only way to get rid of it is to openly burn it. It is also used as fuel for boiling water to make tofu in small tofu factories all around. ... Air, water and land (are) all affected by this."

And he's the one who has documented uniquely American items that indicate where a lot of the trash comes from — "Like AARP cards with names on them. So obviously you know where that's come from."

These new dumping destinations aren't likely to last. Already, Vietnam and Malaysia are cutting back imports of scrap plastic because they are overwhelmed. They can't handle the huge diversion of plastic to their countries since China shut out imports.

Recycling experts say it's a time of reckoning for their industry and that wealthy countries need to stop exporting to countries that can't handle it.