Accessibility links
A Mom Tries To Tame Her 3-Year-Old's Anger Using Inuit Strategies : Goats and Soda After learning how parents in the Canadian Arctic address a child's misbehavior, I changed my tactics when my toddler would slap my face in anger. 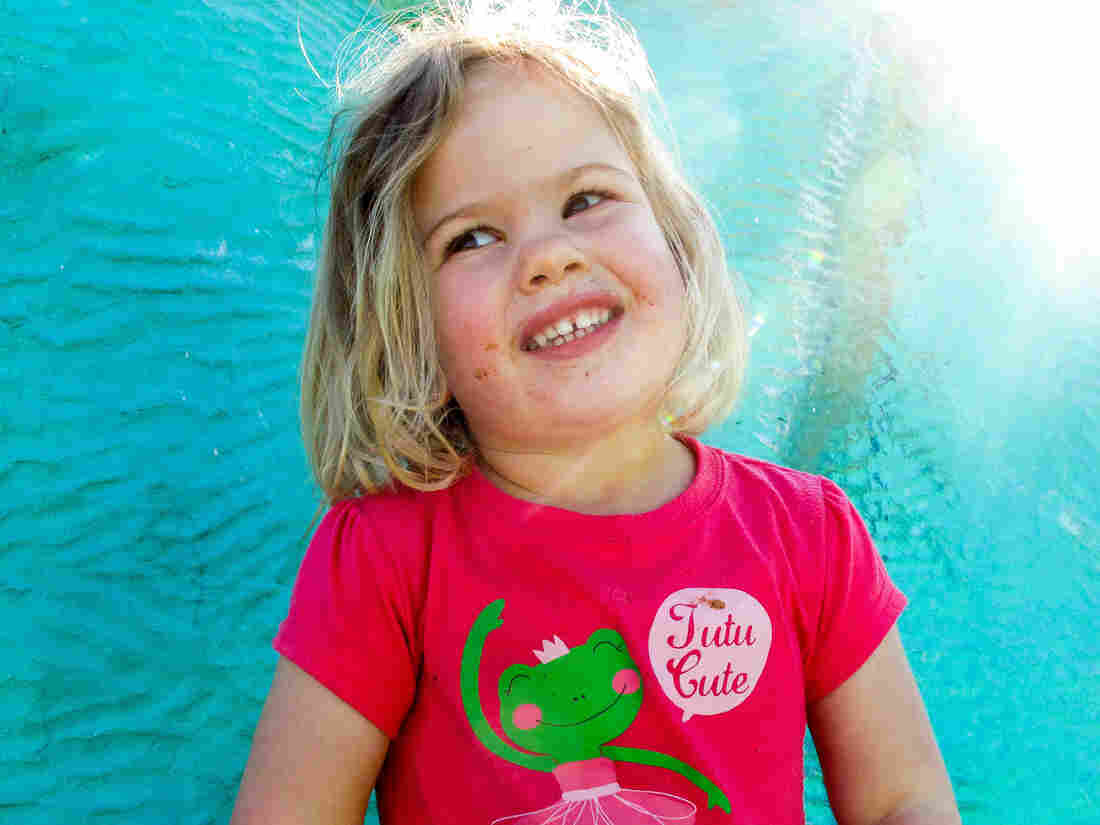 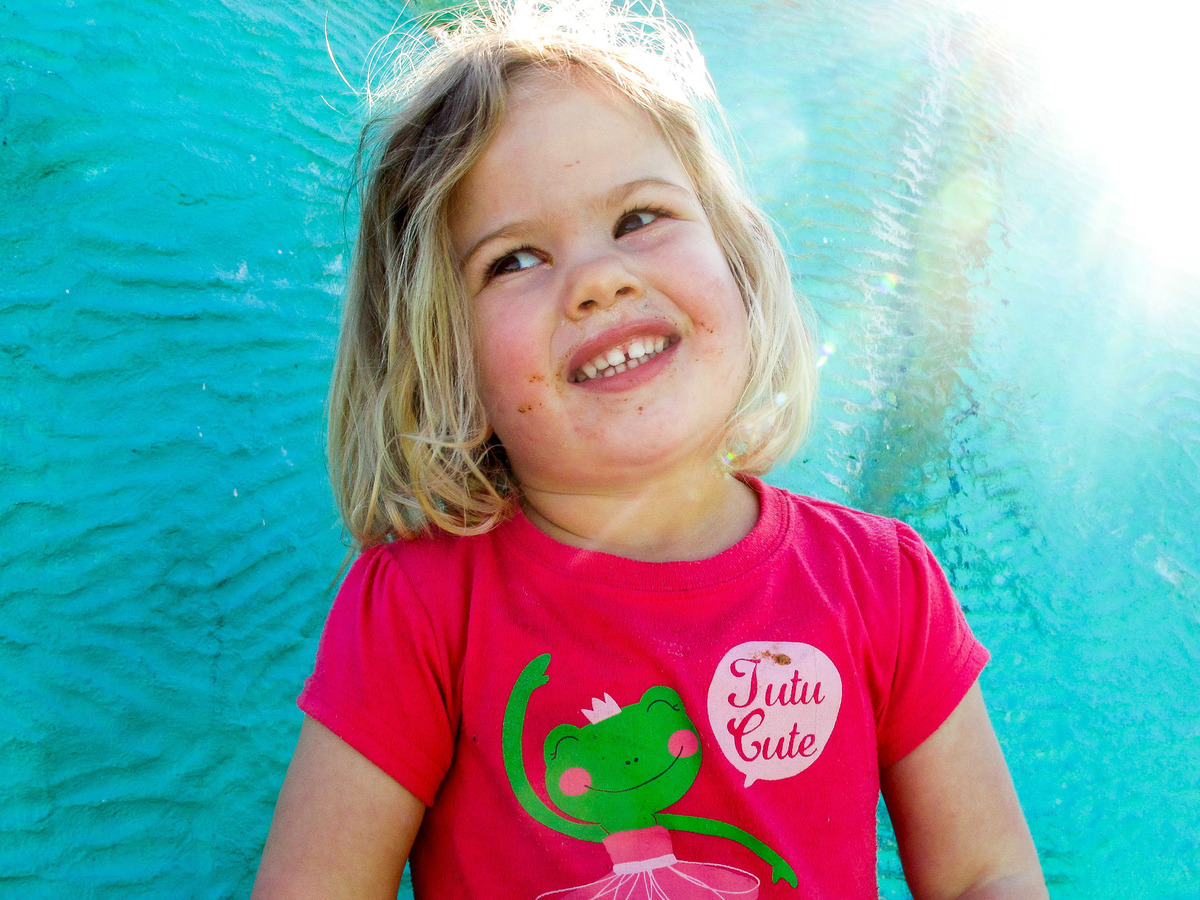 Six months ago, I found myself preparing for battle.

I was lying in bed at 5:30 a.m., going over in my head how to handle the next encounter with my 3-year-old daughter, Rosy.

Goodness knows, I love her so much. But there's a fire in that little belly. And to be honest, I have no idea how to handle all the anger — the tantrums, the screaming and, most of all, the hitting.

This story is part of a series from NPR's Science desk called The Other Side of Anger. There's no question that we're in angry times. It's in our politics, our schools and our homes. Anger can be a destructive emotion, but it can also be a positive force.

When she's angry and I pick her up, she has a habit of slapping me across the face. Sometimes it really hurts. I've even started ducking like a boxer when I lift her up.

At first, I reacted as my parents did, with bluster and sternness. That only backfired. All she did was arch her back and fall on the ground.

Then I consulted Dr. Google and decided calm and firm was the "correct way." But Rosy could tell I was still upset and trying to control her.

Slowly, a wall was rising up between Rosy and me. And I began dreading our time together. Ugh.

Then back in early December, I had an opportunity of a lifetime. I traveled to the Canadian Arctic to report on a story about the Inuit and their remarkable ability to regulate anger. During the trip, I got the chance to hear advice from arguably the calmest, coolest moms in the world: Inuit moms.

It was like these moms had handed me the manual on how to communicate with small children. And their advice completely shifted how I discipline.

She's not 'pushing your buttons'

For thousands of years, the Inuit have raised children in one of the harshest places on Earth. During that time, they've developed a suite of powerful parenting tools to teach children emotional intelligence, especially when it comes to anger.

At the center of these tools is a major tenet: Never shout at small children.

"Yelling? There was no yelling at kids [in traditional Inuit culture]," says Martha Tikivik, 83, who was born in an igloo and has six children.

In fact, there's no reason for a parent to get angry at a small child, Tikivik says: "Anger has no purpose. It's not going to solve your problem. It only stops communication between the child and the mom."

When a child is misbehaving or having a tantrum, the child is too upset to learn, says 89-year-old Eenoapik Sageatook, whose family was forced to settle in a town when she was a little girl. So there's no reason to scold or shout during these moments.

"You have to remain calm and wait for the child to calm down," she says. "Then you can teach the child."

"You think little kids are mad at you," she says. "That's not what's going on. They're upset about something, and you have to figure out what it is."

OK. I admit that following this advice was really hard. I mean really, really hard. It took weeks of practice (and another trick I learned about anger). At first, I just stopped saying anything to Rosy when she had a tantrum or hit me. I knew that if I opened my mouth, the words would be tinged in anger. So I would just close my eyes to calm myself down and then wait for Rosy to calm down herself.

Once I learned not to be angry with Rosy, I began trying to help her with her own anger by loving her. I'd ask if she needed a hug, or I'd hold her really tightly.

Then after she calmed down, I took inspiration from the Inuit moms and turned discipline into fantasy and theater.

Instead of yelling or telling kids what to do, Inuit parents traditionally discipline through storytelling, says Goota Jaw, who teaches an Inuit parenting class at Nunavut Arctic College in Iqaluit, Canada.

For example, she says, to get kids to stay away from the dangerous ocean, parents tell them about a sea monster that lives in the water. If you go too close to the water, the parents say, the monster will put you in his pouch, drag you down to the ocean and adopt you out to another family.

There are stories to get kids to listen to adults, wear hats in the winter, not take food without asking and go to bed on time.

At first, these types of stories sounded too scary for a 3-year-old. Then a few weeks after returning from the Arctic, I flipped my opinion 180 degrees.

One afternoon, Rosy and I were in the kitchen, preparing dinner. I was trying to get her to close the refrigerator door. I deployed my typical strategy: adult logic followed by nagging. I explained several times how she is wasting energy.

It was like I was talking to a wall.

After a few minutes, I found myself in the all-too common predicament of arguing with a proto-human. I was ready to blow a fuse when my thoughts turned to Goota Jaw and the sea monster. So I said, with a half-serious, half-playful tone, "You know? There's a monster inside the refrigerator, and if he warms up, he's going to get bigger and bigger and come get you."

Then I pointed into the refrigerator and exclaimed, "Oh my goodness. There he is!"

Holy moly! You should have seen the look on Rosy's face. She closed the door lightning fast, turned around and said, "Mama, tell me more about the monster in there."

Since that moment, storytelling has become a go-to parenting tool in our home. Rosy can't get enough of these stories and even asks me to make them scarier.

Here are a few popular ones right now:

1. Sharing Monster: Living up in a tree outside the kitchen window, the sharing monster grows bigger and bigger when little kids aren't sharing. At some point, he could come up, snatch you and take you up in the tree.

2. Yelling Monster: He lives in the ceiling and comes down to snatch little kids who yell and are demanding.

3. Shoe Monster: She makes sure kids get their shoes on in the morning — quickly — or else she'll take you down into the heating vent.

4. Dress Spiders: Back in January, Rosy wore the same pink dress day and night for about five days. I couldn't get her to take it off. I tried talking logically: "Rosy, if we wash it tonight, it won't have stains on it for school tomorrow." She looked at me as if I were speaking French.

Finally, I got close to her and whispered, "If the dress gets too dirty, spiders will start to grow in it."

Rosy didn't say a word and slowly slipped the dress off. When I pulled the dress out of the dryer, I held it up and exclaimed, "See? So nice and clean!"

Rosy didn't miss a beat. "And no spiders," she emphasized.

Overall, storytelling has opened up a huge communication channel between Rosy and me. I feel like I'm finally speaking her language. She couldn't care less about kilowatts of power or stains on the dress. But a monster that grows and spiders that crawl — those ideas she can wrap her head around.

Put on a play

Storytelling has definitely decreased the yelling, nagging and blown fuses in our home. But the stories didn't stop the hitting. For that, I needed inspiration from another Inuit strategy, which anthropologist Jean Briggs studied for more than 30 years ago.

In a nutshell, here's how the approach works:

When a child misbehaves — hits someone or has a tantrum — there's no punishment. Instead, the parent waits for a calm moment and then acts out what happened during the misbehavior.

Typically the performance starts with the parent tempting the child to misbehave. For example, "Why don't you hit me?"

Then the child has to think: "What should I do?" If the child takes the bait and hits, the parent doesn't scold or yell but instead acts out the consequences. "Ow, that hurts!" Mom or Dad might exclaim, to show that hitting hurts.

Briggs documented that the parent continues to emphasize the consequences by asking follow-up questions such as "Don't you like me?" or "Are you a baby?"

The goal is to give the child a chance to practice the proper behavior at a time when the child is open to learning and not emotionally charged. Throughout the drama, the parent keeps a playful tone and a wink in the eye.

With Rosy and her hitting, I definitely had not been reacting in a playful way. Just the opposite: I was stern and serious. So with a hefty dose of skepticism, I abandoned that strategy and gave this playful approach a try.

Each time Rosy hit me, no matter how hard she slapped and how infuriated I was, I didn't get angry. Instead, I said in a dramatic way, "Ooo, that hurts! Goodness that hurts!" to show that hitting hurt me physically and emotionally.

Then I asked her this one question, with an exaggerated sense of pain and suffering: "Don't you like me?" (To hear what I sound like, take a listen to the radio story).

Immediately, this fun tone changed Rosy's behavior. The tension between us melted away, and the hitting decreased. I could see the little gears in her brain churning. "Wait! Am I hurting Mom's feelings?" she seemed to be thinking. (And I could see that Ipeelie was right. Rosy wasn't pushing my buttons. She cared about my feelings.)

So I thought I'd try putting on a little drama by asking her, "Why don't you hit me?" The first few tries were rough. She would wallop me. But I stuck to the script, and slowly I could see her thinking before she struck. She started to play-hit me or stopped mid-swing. After about a month, a tiny miracle occurred.

We were in the kitchen, having a snack, and I said, "Rosy, why don't you hit me?"

"Because I love you," she whispered.

"Because you love me?" I said, in complete shock. "That's very nice."

Nice — and a testimony to teaching kids through stories, play and practice.