Accessibility links
Cyclone Idai's Toll: A Town Searches For Lost Loved Ones : Goats and Soda The town of Chimanimani is said to be the hardest hit in Zimbabwe. Survivors are searching for the bodies of their lost loved ones. 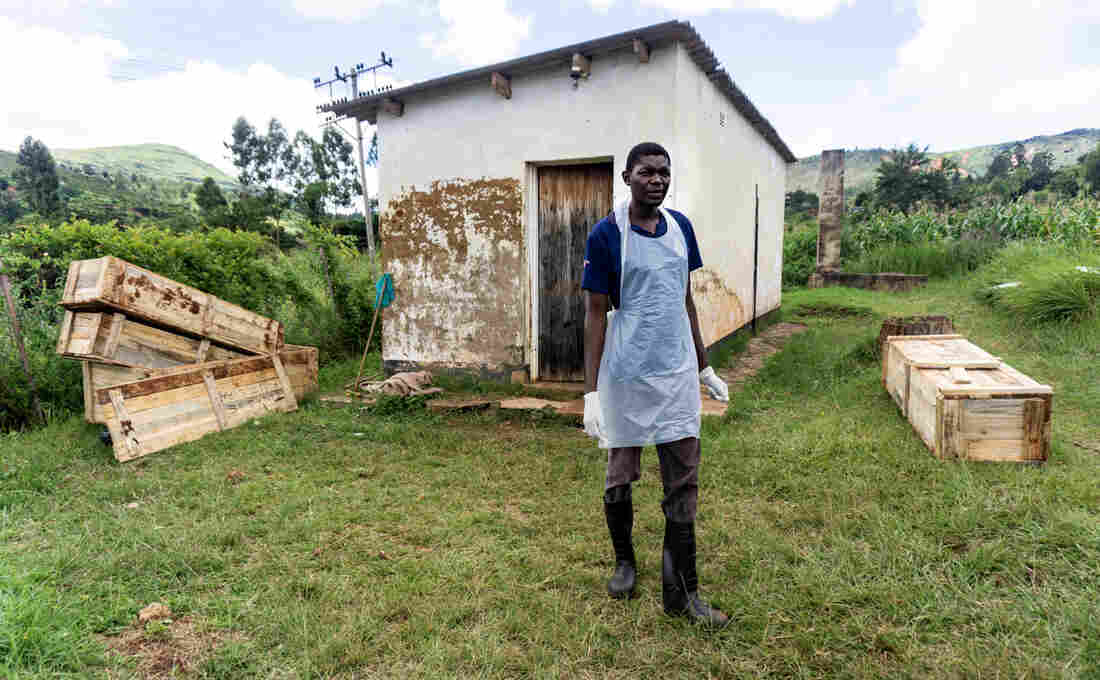 Definite Tom, a primary school teacher, lives in Chimanimanim a town in Zimbabwe. Her home is still standing after the cyclone, but she is afraid to go back. Her grandmother died in the disaster. Tendai Marima for NPR hide caption 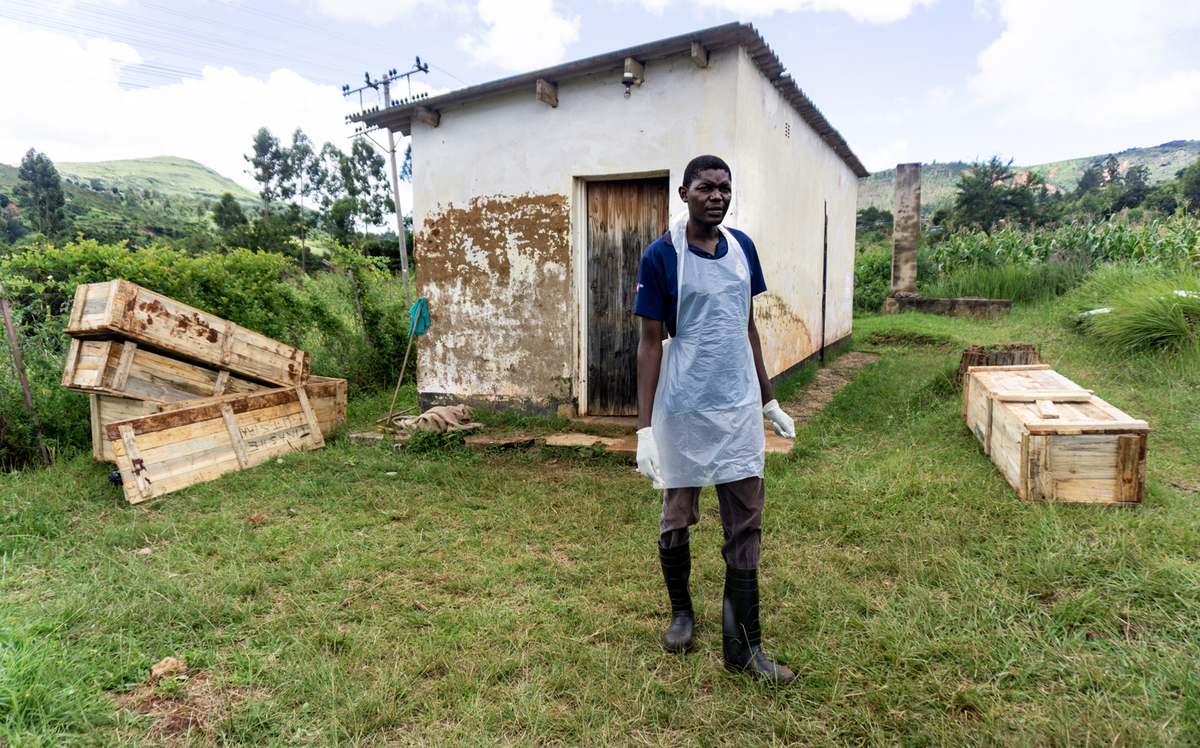 Definite Tom, a primary school teacher, lives in Chimanimanim a town in Zimbabwe. Her home is still standing after the cyclone, but she is afraid to go back. Her grandmother died in the disaster.

The smell of death hangs in the air – a mix of decomposing flesh and what I can only describe as the odor of pine-scented bleach.

Flies hover over sections of the long tall grass and clusters of fallen rock in Chimanimani, the town in the mountains of Zimbabwe's eastern border with Mozambique. Cyclone Idai made landfall here late on the night of March 14 into the 15th.

An unknown number of residents of the town still lie buried beneath those boulders and in nearby valleys, under rocks from the landslide triggered by the cyclone.

The storm first hit Mozambique then proceeded to neighboring Zimbabwe and Malawi. The death toll so far is more than 500. It's thought to be one of the worst natural disasters to hit southern Africa since Cyclone Eline in 2000. The storm is over although it still rains off and on as the search for bodies continues.

Some say that Chimanimani, at an altitude of 4,823 feet, is the town in Zimbabwe that has suffered the most from the cyclone. It's where most of the deaths in the country have occurred.

Search groups put plastic bottles around plots of land as markers to indicate a search is ongoing. On Friday, in the rubble of a building destroyed during a rockslide, a team of locals led by Everlugisi Mudzidzi, 43, found the body of a small child — 3-year-old Excite, the son of Mudzidzi's neighbors. They laid the small body on the grass, where flies buzzed around it.

For the family and close friends like Mudzidzi, finding the child was a tragedy but at least brought closure after days of searching.

"It really worried us where this child could be," Mudzidzi told NPR. "We attend the same church as his father, we pray together and it was hard for him wondering where his child's body was. Now we can all finally find rest and have peace because we know the child is laid to rest now." 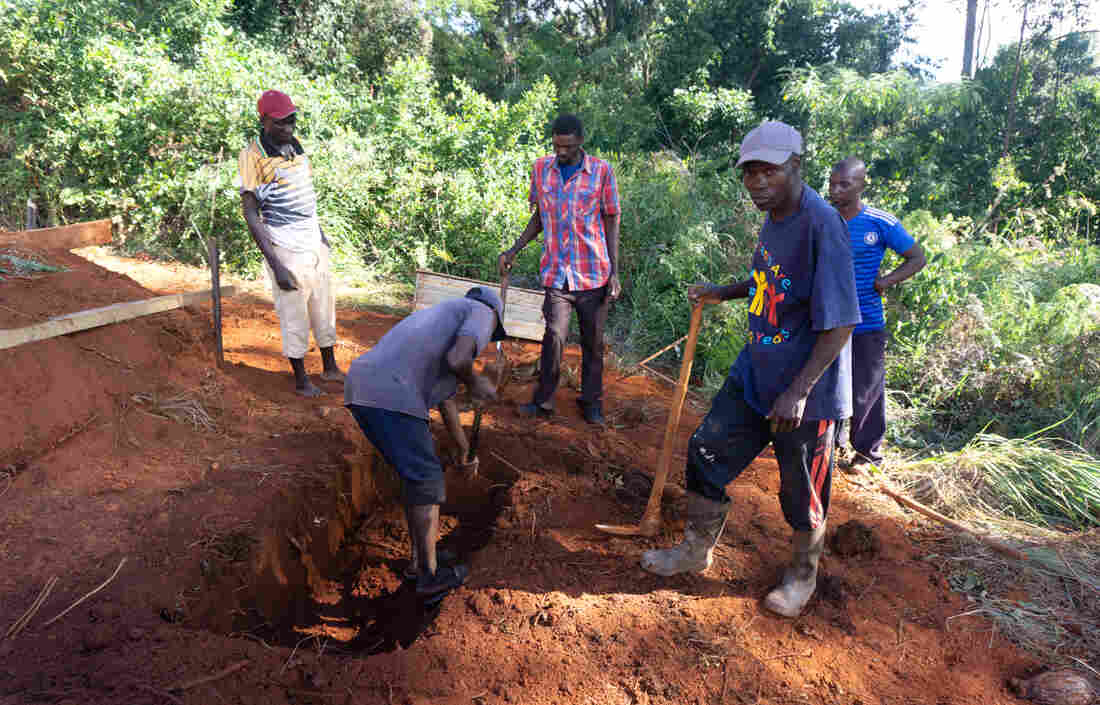 Gravediggers prepare the burial site for 3-year-old Excite, who died after the cyclone hit. Tendai Marima for NPR hide caption 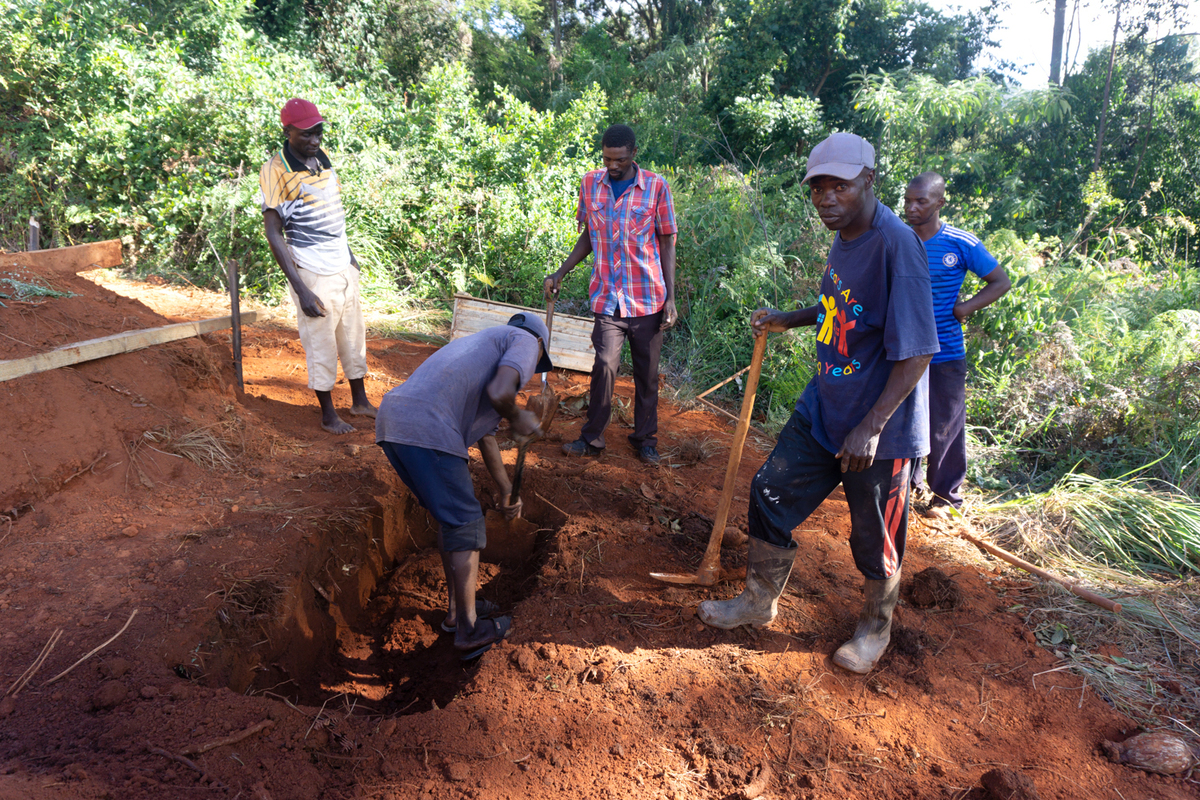 Gravediggers prepare the burial site for 3-year-old Excite, who died after the cyclone hit.

The little boy joins dozens of other buried in makeshift coffins at an extended section of the local cemetery. The area was specially demarcated for victims of the cyclone. They are buried side by side and sometimes two in a grave to make digging easier for the gravediggers, who had to bury 48 people in just one day.

For more than a week Chimanimani has been inaccessible by road; the cyclone damaged roads and bridges connecting it to other parts of the country. Military helicopters as well as copters lent by wealthy people in the area have been used to fly in essential medicines and fly out the critically injured.

Slowly the government is clearing roads of obstructing branches.

The Chimanimani Rural District Hospital mortuary, whose fridge can only hold three dead bodies at a time, was overwhelmed in the wake of the storm.

Bodies that were discovered were kept in the churches until volunteer carpenters could craft coffins from timber planks.

At one time, over 60 bodies were laid out in the town's Roman Catholic Church.

Godwin Mundiripo, the local Roman Catholic priest, along with a Salvation Army priest, performed the burial rites, one by one.

"We had to divide up the church with a curtain, we put the bodies on the benches and then people who were homeless or those who would come from another village looking for their relatives would sleep on the other side," he says.

"There needs to be some sort of ceremony. Those who have lost family are hurt, and those who don't find their family members are just wondering where they could be. This cyclone was very traumatizing, we've tried to care for the dead, but now to always wonder where the body of one's family member is can be very disturbing." 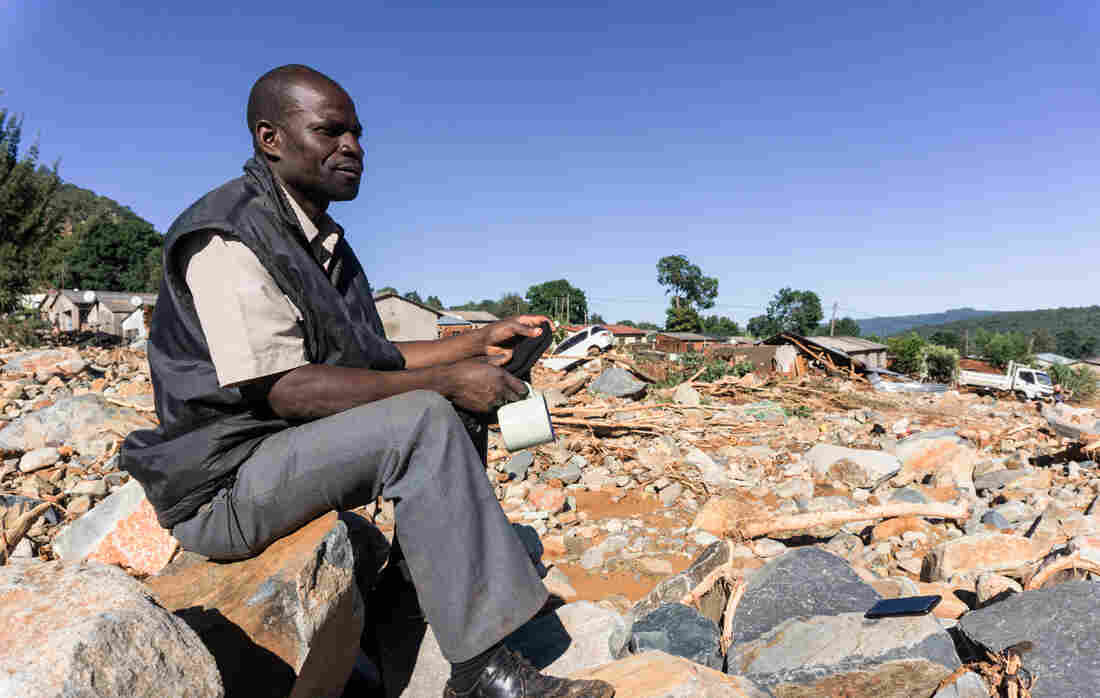 Moses Dudzai, 42, sits by an area where houses have been flattened by rocks falling from the mountain. His 19-month-old daughter has been missing since the storm and the landslide it triggered. Tendai Marima for NPR hide caption 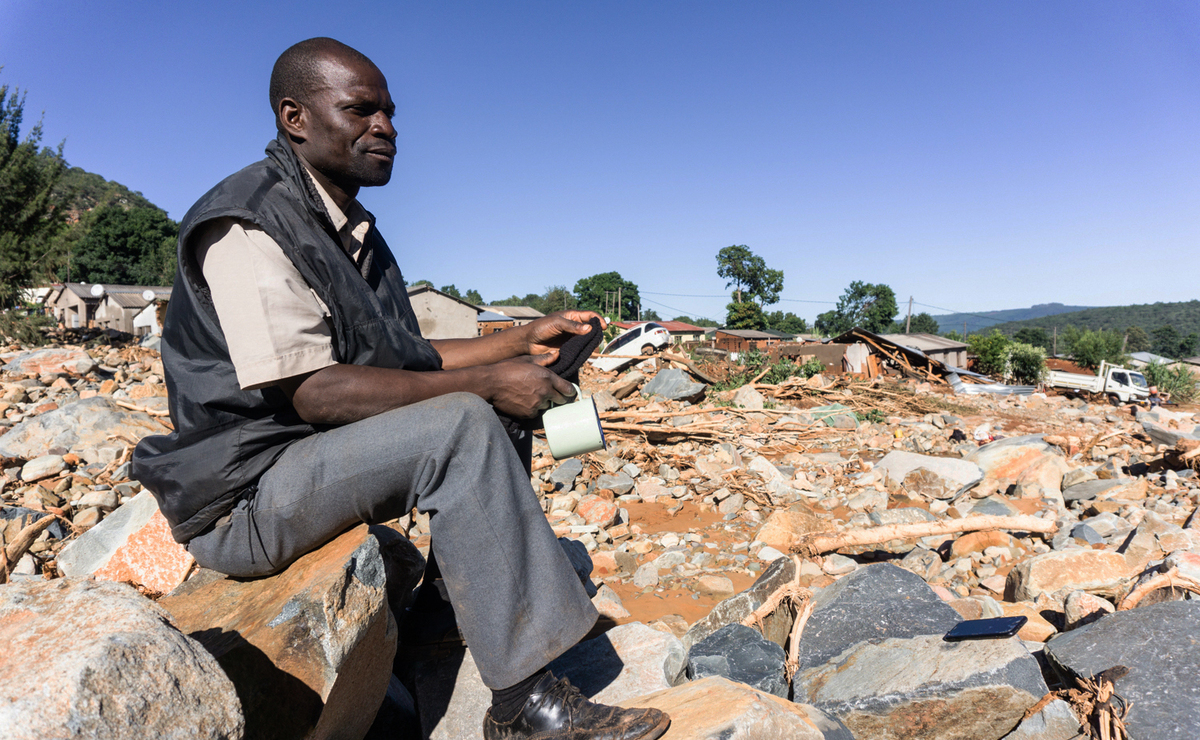 Moses Dudzai, 42, sits by an area where houses have been flattened by rocks falling from the mountain. His 19-month-old daughter has been missing since the storm and the landslide it triggered.

Moses Dudzai, 42, a security guard, still holds out hope the community search parties will find his daughter, 19-month-old Tanatswa, beneath the landslide. His wife and another daughter were injured during the rockfall and both are currently in a hospital in another town, receiving care for head and body injuries.

Flies buzz around the rocks piled up near the now-destroyed home where he lived.

Dudzai can't be sure the body of his baby, Tanatswa, will ever be found.

"We are failing to locate where she is," he says. "My wife who tried to hold onto her [Tanatswa] survived, but she's seriously injured, she has deep cuts on her head and her legs. All my property was destroyed, all things with value were taken by the water.

"I'm appealing if there's a machine out there that can detect where her decomposed body's lying, so it can be retrieved and we can give her a decent burial," he says.

A stony pelt of rocks now covers the area where houses once stood in Chimanimani's Ngangu neighborhood. A few houses weren't damaged, but the inhabitants don't necessarily want to stay.

Definite Tom, 42, a primary school teacher in Ngangu, lost her 82-year-old grandmother. Her body was found after a three-day search at the bottom of the hill where the town is situated.

"My grandmother died in a very painful way, it's hard to deal with it," says Tom. "So many in our community are lost, especially small children. Their bodies are hard to find, and we only know there's someone in a place if we smell something."

"My children hear sounds at night and they think the rain is coming back again," she says. "Even I'm scared to sleep in this house. My house was not destroyed, but I don't feel safe here. We sleep at the [Methodist] church next door, I just don't know how we'll get over this in future," she says.

As Zimbabwe mourns its dead, a shroud of white mist covers Zimbabwe's eastern mountains. And the smell of death still hangs over the town of Chimanimani.