Accessibility links
A Young Woman's Very Personal Perspective On The Rwandan Genocide : Goats and Soda Clemantine Wamariya talks about her memoir The Girl Who Smiled Beads, what people don't understand about refugees — and her hopes for the future of Rwanda. 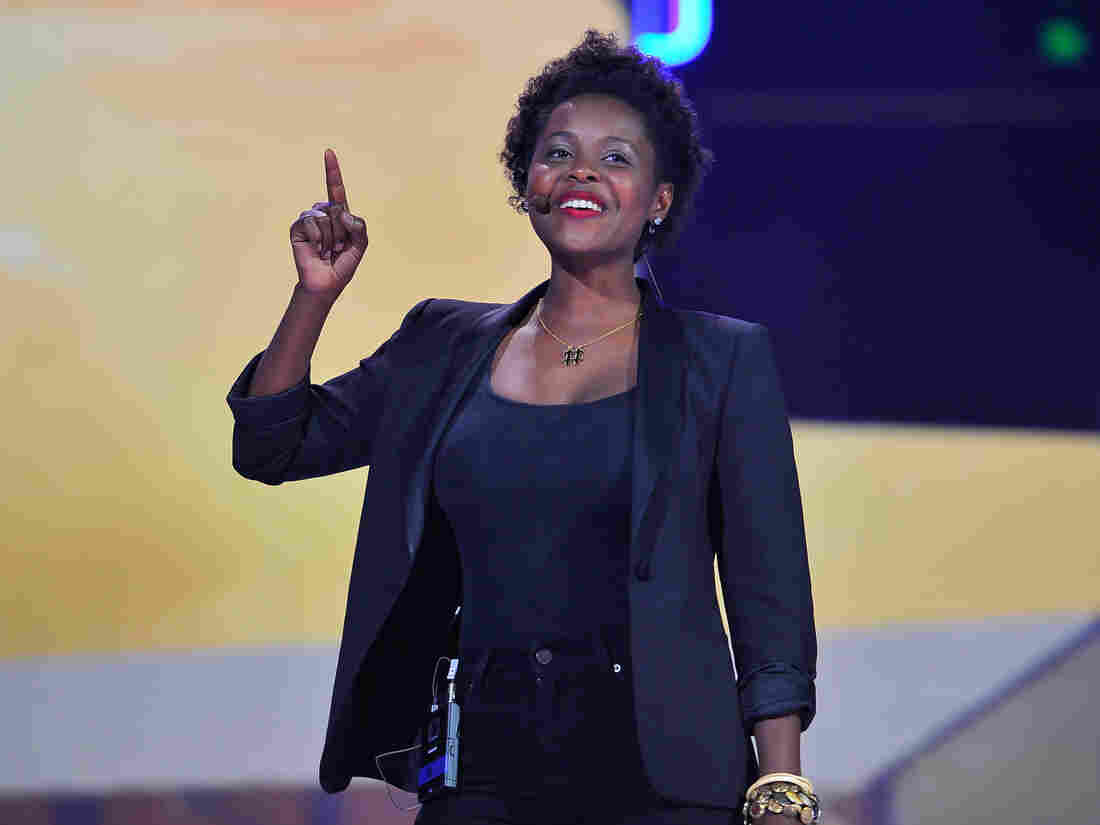 Clemantine Wamariya, who fled Rwanda as a girl, is now a U.S. citizen. She is a human rights advocate and a speaker. Steve Jennings/Getty Images for Free The Children hide caption 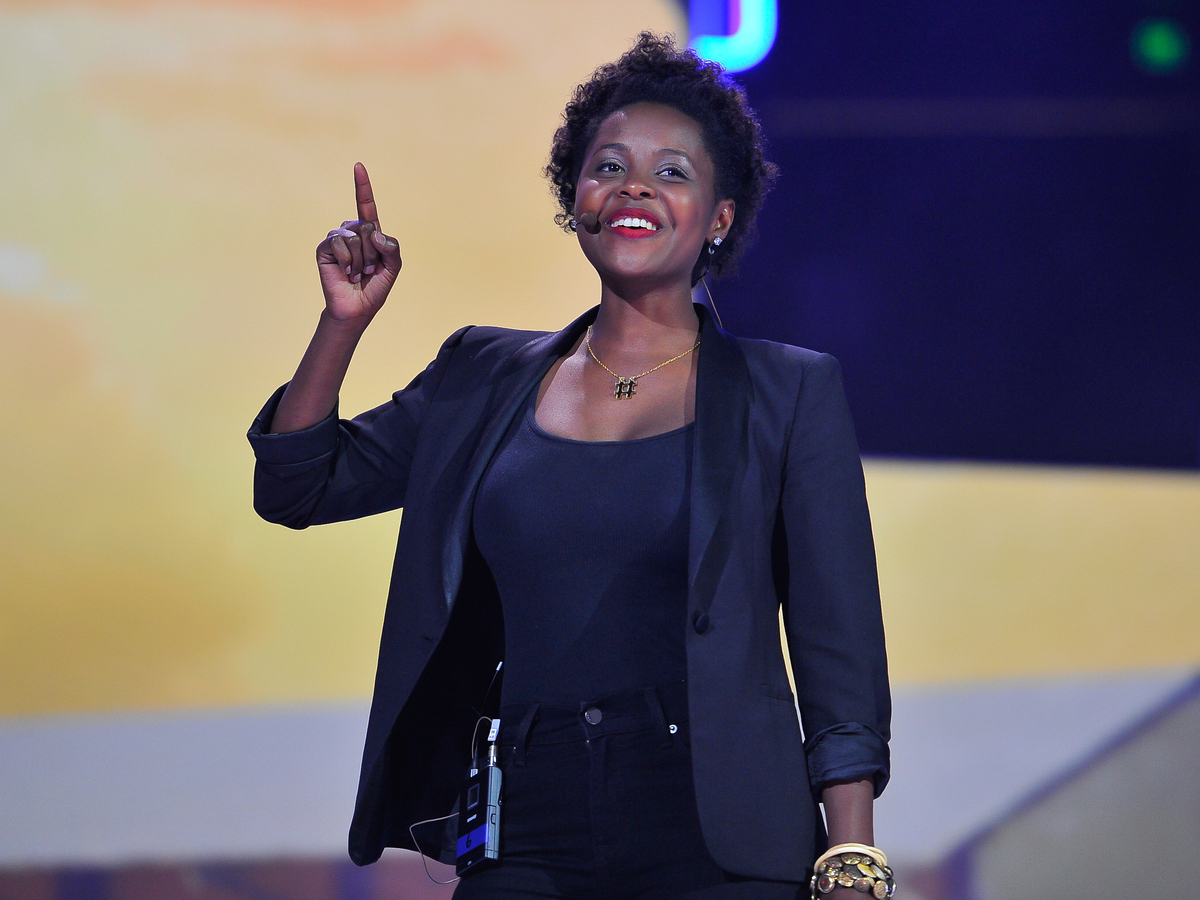 Clemantine Wamariya, who fled Rwanda as a girl, is now a U.S. citizen. She is a human rights advocate and a speaker.

Twenty-five years ago this month, more than 800,000 Rwandans, mostly Tutsi, were slaughtered over the course of 100 days by members of the country's Hutu majority.

Among those who lived through the terror is Clemantine Wamariya. Her memoir, The Girl Who Smiled Beads: A Story of War And What Comes After, recounts in wrenching detail her six-year trek in search of refuge from her country's killing fields. Co-authored with Elizabeth Weil, the book was published to acclaim in 2018 and is now out in paperback. 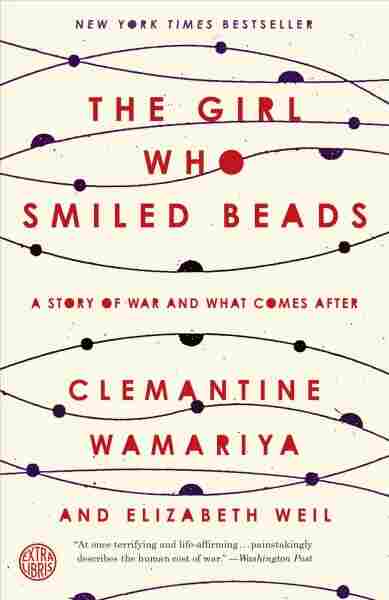 The Girl Who Smiled Beads

A Story of War and What Comes After

by Clemantine Wamariya and Elizabeth Weil

The title comes from a favorite story that Wamariya heard from her childhood nanny about a girl who disappears leaving no trace except beads. In her prologue, she writes, "Often, still, my own life story feels fragmented, like beads unstrung."

Wamariya was just six and her sister Claire, 14, when the fighting began in 1994. Their parents sent them to their grandmother's house, located closer to the border with Burundi, with the hope that they'd be safer there.

After several days of sleepless nights filled with the noise of bombs exploding, there was an ominous knock on the door. Their grandmother told the sisters to run. Together, they traveled thousands of miles, often by night, usually by foot, sometimes by truck and once by boat on a route that took them to Burundi, Zaire (now the Democratic Republic of the Congo), Tanzania, Malawi, Mozambique and South Africa before being granted asylum by the United States in 2000.

Wamariya went on to graduate from Yale. Now 31, she is a human rights advocate and speaker based in San Francisco. We spoke to her about her experiences and about the 25th commemoration of the Rwandan genocide. The conversation has been edited for clarity and for length.

Was it difficult to relive your story in your book?

You have said you don't like the word genocide.

The word is clinical. It has been used to quantify the numbers of those killed. But it does not tell you about the [individual] people who were hurt or lost.

It is just the entry point for talking about the horrors and what actually happened [in Rwanda] and elsewhere. I am more interested in expanding on how it feels, the emotional, personal side of the horror, the before, during and after.

You also prefer not to be called a "refugee." What vocabulary should we use?

I would prefer being called by my name or a person who sought refuge.

The word refugee leads to stereotypes or expectations that don't allow us to see who someone is. During our travels, Claire and I learned to speak seven languages, but you could see the surprise in the faces of anyone who thinks that people seeking refuge [could not have such knowledge or] did not have a meaningful life before they fled.

We need to see beyond the projections that we cast onto each other. In America, we all have stories about how we [or an ancestor] sought refuge. We clash when we forget that was the case or when [we] start to believe that one person's refuge story is better than or worse than another's.

You wrote that you found a way to begin talking about those horrors after you read Elie Wiesel's Night, his memoir about the Nazi genocide of the Jews during the Holocaust.

I read it when I was in eighth grade [in Chicago]. It awakened me to a shocking side of humanity. It offered me words to feel what I had thought was unspoken, and Maya Angelou and Toni Morrison gave me the freedom to speak.

You later wrote about Elie Wiesel in a submission to the Oprah High School Essay Contest and said that maybe if Rwandans had read Night, they wouldn't have decided to kill one another. That essay also led to your appearance on Oprah, who arranged to fly your parents and siblings from Rwanda to her studio for a surprise on-air family reunion.

We had not seen each other in 12 years. I felt gratitude and joy that I still have yet to find words to describe. But also anger that nothing could restore the time we had lost with each other. I have learned to forgive ... all that happened to separate us.

Do your parents talk about the past?

My parents live in a never-ending present, unable to talk about what happened to us. At first it was frustrating, but now I can understand that attitude.

Your story is deeply intertwined with that of your older sister, Claire. Tell us about her.

She is a heroine, like Xena the princess warrior, real and of our time. The map [of where the sisters traveled] is all Claire, her decisions about which place would be farther from wars and give us opportunity to live freely and to be seen for who we are and have a sense of agency and where we would have respect. For the past 10 years she has worked with many who have sought refuge in Chicago and with an organization called Women United for Immigrants and Refugees.

You discuss the many difficulties of living in refugee camps in Burundi and elsewhere. How did you feel as a person?

It is easy to get lost because all aspects of who you are, at least the things that used to make you a person, are stripped away.

What are the important points for refugees to share?

The person who has lived and survived in these conditions has to break the silence and talk not only of gratitude but the horror in these camps. In most, people have to walk at least hours to fetch water. Monthly food portions, if camps are lucky to receive any, are [often] maize.

I invite everyone who is involved with refugee camps to have a meaningful conversation [with the refugees] they serve about what would make these places a place of refuge.

What are your thoughts as you commemorate the 25th anniversary of the start of the Rwandan genocide?

Every American and every person who wants to know what hate can do should look at what happened in Rwanda. If you want to know that peace is possible, you should also look at Rwanda now: [Rwandans] working together every day to create peace and to live beyond hate. I am very proud of Rwandans.

Read an excerpt of The Girl Who Smiled Beads