Accessibility links
How To Discipline Kids Without Raising Your Voice : Goats and Soda Our readers share ways to get your children to listen without raising your voice — sometimes without saying a word. 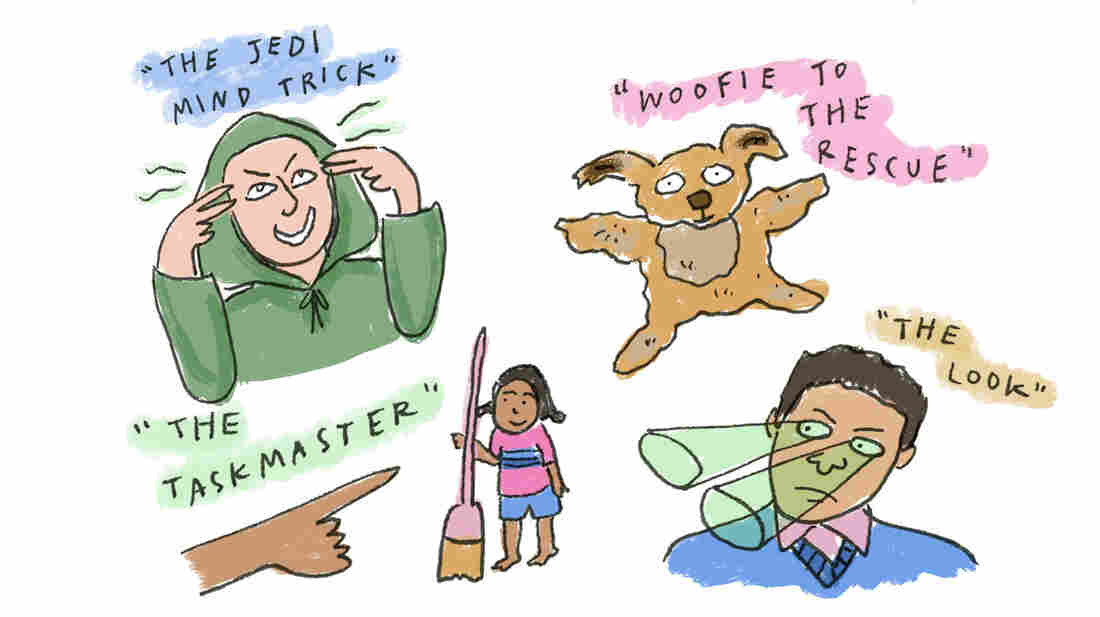 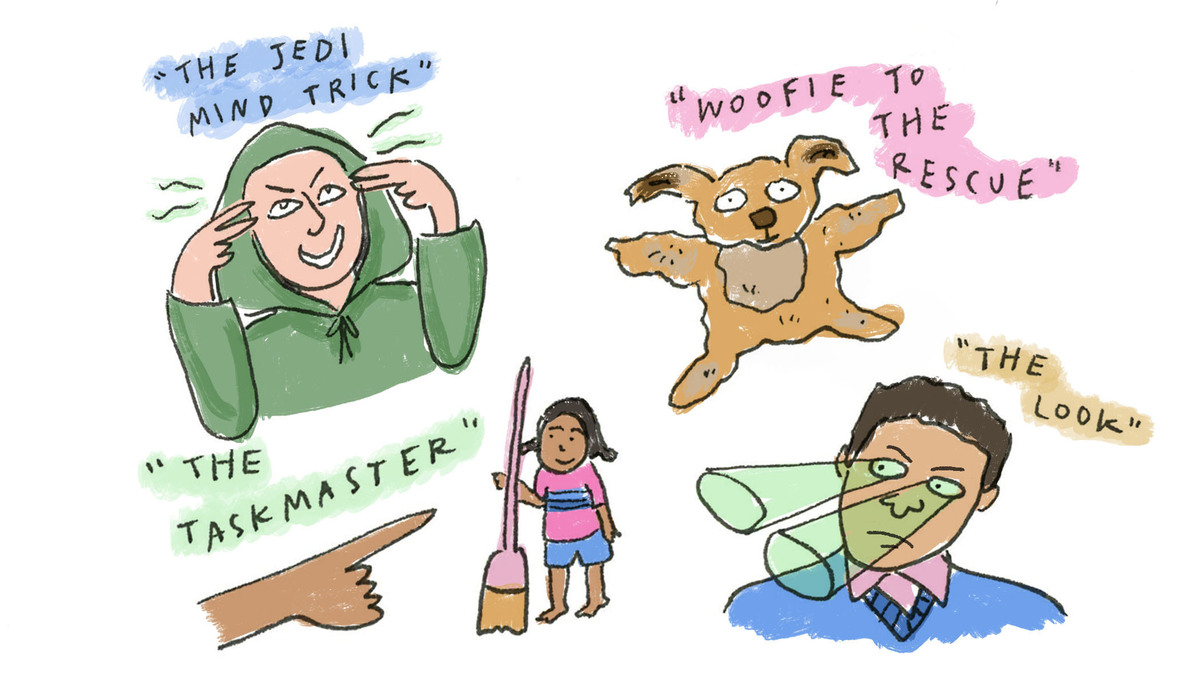 Is it possible to raise children without shouting, scolding — or even talking to kids with an angry tone?

Last month, we wrote about supermoms up in the Arctic who pulled off this daunting task with ease. They use a powerful suite of tools, which includes storytelling, playful dramas and many questions.

But Inuit parents aren't the only ones with creative alternatives to scolding and timeouts. Goats and Soda readers sent in more than 300 tricks for getting kids to listen without raising your voice — sometimes without even saying a word.

This story is part of a series from NPR's Science desk called The Other Side of Anger. There's no question that we're in angry times. It's in our politics, our schools and our homes. Anger can be a destructive emotion, but it can also be a positive force.

Here are the highlights, which have been edited for clarity and length.

The first step to no-yell parenting is to get a grip on your own anger, Inuit moms told us. As I've experienced, this is not always easy. But Veda Glover has a Jedi mind trick that's helpful: "I consciously place my mindset into a grandmother role," says Glover, who's a Navajo bilingual teacher in Kirtland, N.M.

"When I first started teaching, I could feel my blood pressure rising when students wouldn't listen to me and follow directions," she says. "Then I came up with a question to ask myself in these situations: 'What would my own grandmother do?' "

This strategy "helps me keep calm and, as a result, helps my students understand that there is no need to yell nor become upset," says Glover.

Instead of yelling or saying "No," try deploying a stern look, says teacher Vita Osborn.

"Almost telepathically, my parents conveyed pages of information in a few short looks," she says. "One serious glance from my father or mother was enough to communicate that I was displeasing them in some way."

In traditional Inuit culture, some parents wrinkle their noses to convey "No" to a small child. But you can make "the look" with eyes wide open, eyes squinty or even a blink, as teacher Kristi McEwen's mom did.

"My mother is Yupik from southwest Alaska," McEwen says in her response to our callout. "When she wanted me to stop a behavior, all she had to do was slowly but firmly blink at me and that was a stern 'No.' "

(McEwen says her mother also had an interesting way to stop bickering between cousins: "She would have us stand in front of her and raise our arms above our heads while she commanded, 'Don't laugh,' McEwen says. "Of course, we were in fits of giggles before we knew it.")

FWIW: I find a stern look or nose wrinkle is highly effective in the grocery store when my 3-year-old daughter is picking up candy bars in the checkout aisle. I think she hasn't figured out yet how to try to negotiate with eyes and nose.

Step 3: Put the kids to work

When a child misbehaves or makes a mistake, several readers suggested switching from being angry to being productive.

"Imagine the child knocks over a vase that belonged to your grandmother," says Terry Meredith. "Rather than get angry, I say 'Can you go get the broom so we can sweep up the pieces?' "

Then Meredith and her child work together to fix the mistake. "I ask 'Do you think we can glue the vase back together?' " she says. "Then the child is involved in cleanup and repair."

This approach teaches children the real-life consequences of their behavior, says business owner Tracy Herman, who also puts her kids to work instead of yelling.

"As they got older, if they spilled or broke something, I'd toss the appropriate tool and say, 'Clean it up,' " she says. "Let go of control and provide natural consequences because that is how we learn to make choices in life."

June Shockley raised three sons with a similar strategy and says she had a "happy healthy home."

"I never grounded a child in my life," she says. "I would give an alternate activity."

For example, if her son was angry with about what's for dinner, Shockley would involve the child in meal prep by taking them grocery shopping and having them help cook the meal.

"That way our sons walked a mile in my shoes," Shockley says.

"If one son hit his brother, I would say, 'We need more kindness in the world. Let's go to the animal shelter and clean the cages and give hugs and kisses to the puppies,' " Shockley explains.

For young kids, sometimes all it takes is a little make-believe to get them to behave, says Kathryn Burnham.

"For example, if we're running late and my 3-year-old daughter needs to put on her shoes, I've learned that yelling or putting on the shoes myself makes things worse," says Kathryn Burnham. But when "Woofie" comes along, the shoes go on easy as pie.

"I make my hand into a dog by bringing [two of] my middle fingers down to my thumb for a mouth," Burnham says. She calls that hand dog "Woofie."

"Then I'll say something like 'Can Woofie have a turn trying to put on your shoes?' And I'll make silly whining, panting and barking dog sounds while Woofie helps her put on her shoes.

"The more animated I make Woofie, the more she giggles and loosens up," Burnham says. "With play, the tense situation has been turned into a fun bonding moment."

For Penny Kronz's son, a stuffed animal often does the trick.

"When he doesn't want to join an activity, I just tell him it's time for his favorite stuffed animal to go to bed or come eat," Kronz says. "Then I proceed doing the activity with the stuffed animal, and he generally will quickly come join in."

At the end of day, sometimes Mom and Dad have to let go and let the pajamas take over the parenting, says Adele Karoly.

"When my son doesn't want to put on his pajamas, I will start having the pajamas talk to me," she says. "They will say something like, 'Elliot wants to wear us? And I will answer, 'I don't think he does, let me ask him.' "

And if Elliot says "No"?

"I will tell the pajamas and continue to have a conversation with them," Karoly says. "Eventually, he will get drawn in and accept the pajamas, and they will be so excited and give him a big hug."