Accessibility links
Who Was The Doctor Killed In Friday's Attack On Ebola Responders? : Goats and Soda Dr. Richard Valery Mouzoko Kiboung of Cameroon arrived in the Democratic Republic of the Congo just four weeks ago – and was increasingly worried about his safety. 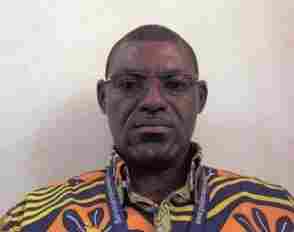 Dr. Richard Valery Mouzoko Kiboung of Cameroon was killed on Friday in an attack on an Ebola response command center in Democratic Republic of the Congo. DRC Ministry of Health & WHO hide caption

Dr. Richard Valery Mouzoko Kiboung arrived in Democratic Republic of the Congo just four weeks ago — one of hundreds of disease experts that the World Health Organization has recruited to help curb the ongoing Ebola outbreak there.

An epidemiologist from Cameroon, Mouzoko was assigned to lead the local response team in one of the worst hot spots within the city of Butembo. He was an instant hit with his team — able to joke around with them even as he pushed them hard.

But at least one colleague says that behind the scenes, Mouzoko was starting to grow uneasy. Since February there had been a series of direct attacks on Ebola responders. Gunmen stormed two Ebola treatment centers in three separate assaults. And increasingly, when health workers and burial teams entered some of the hardest hit communities they were threatened with stone-throwing or worse. 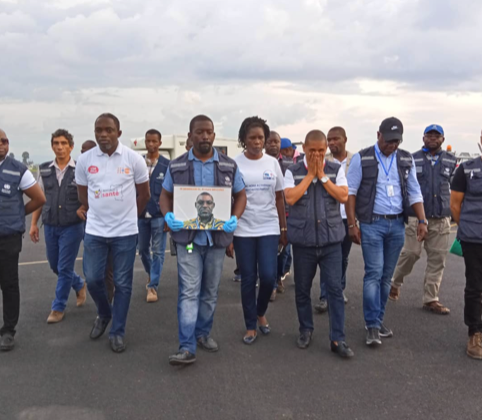 Colleagues of Dr. Mouzoko remember him as an inspiring leader who pushed hard but was also able to joke around. DRC Ministry of Health & WHO hide caption 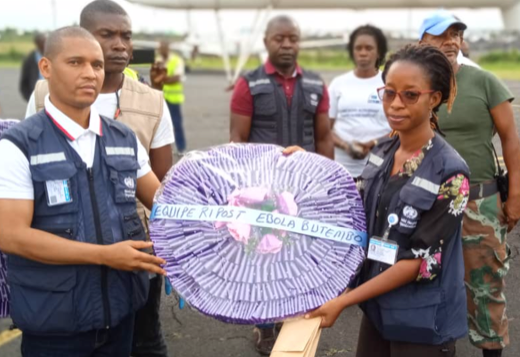 Members of the Ebola response team led by Dr. Mouzoko display a funeral wreath. A service was held in Congo in his memory on Saturday. DRC Ministry of Health & WHO hide caption

"One of [Mouzoko's] colleagues told me he would say, 'I'm scared in this environment,' " says WHO's head of on-the-ground operations for the Ebola response, Dr. Michel Yao. Mouzoko had a wife and four children in Cameroon, the oldest just 12. "He would say, 'I have my kids. I need to be careful so I can go back [to them].' "

On Friday, Mouzoko's worst fears were realized. Two armed men burst into a staff meeting he was leading. Yao says witnesses told him the attackers first grabbed staffers' cellphones and other equipment, then began shooting. Two people were injured. Mouzoko was killed.

Hours later, around 3 a.m. Saturday, a handful of people tried to set fire to another Ebola command center, this one at a hospital in a suburb called Katwa. Police fought them off, killing one attacker and capturing three others.

Several days later, WHO and Congolese officials are still grappling with what comes next.

One challenge, says Yao, is that it's still not clear who precisely was behind each attack. That makes it hard to tease out their motives, let alone figure out how to stop them.

For instance, the fact that the gunmen in Friday's attack were so focused on stealing equipment "suggests an economic motive," says Yao. But he notes that witnesses also report that the assailants accused the team of making up Ebola as a ruse to make money off the population.

The witnesses told him that the attackers said, "Ebola doesn't exist! ... [You've] invented the disease."

That fits into a larger pattern of community distrust that has plagued Ebola responders since the outbreak was declared last August. There have been years of armed conflict in the outbreak zone. Dozens of armed groups are active in the area. And many citizens feel victimized by the government. So they're suspicious of authorities and, by extension, health workers.

Over the past several weeks, WHO and government officials say they've been stepping up outreach efforts aimed at winning people's confidence. 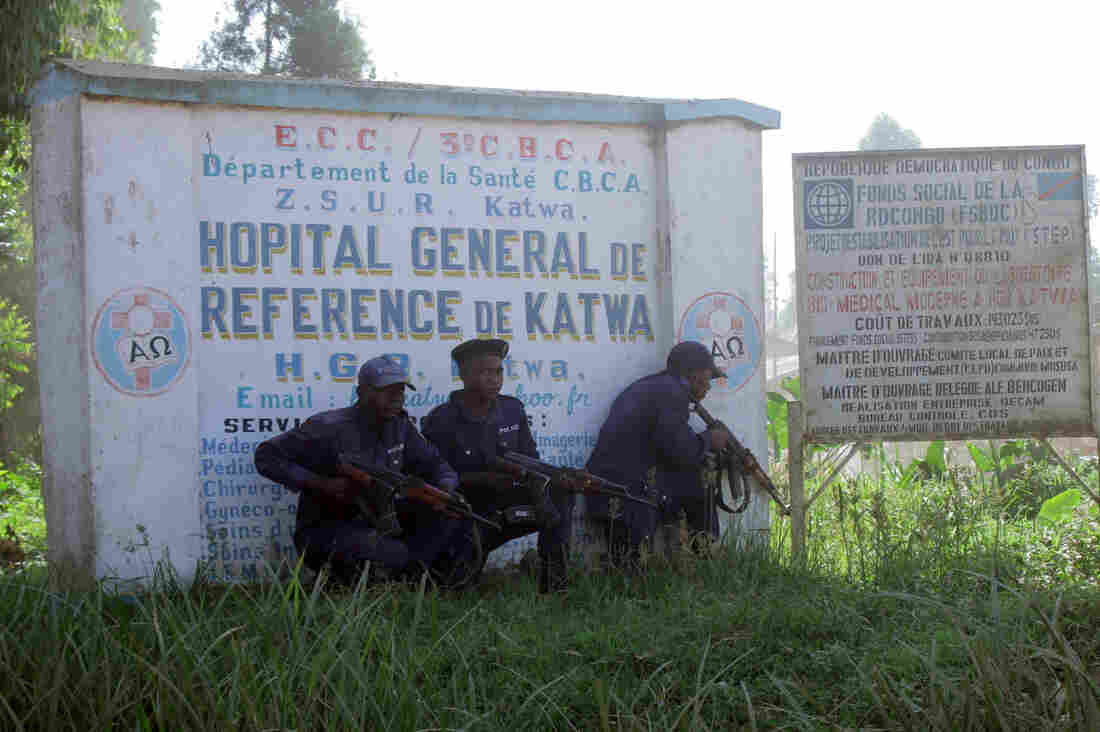 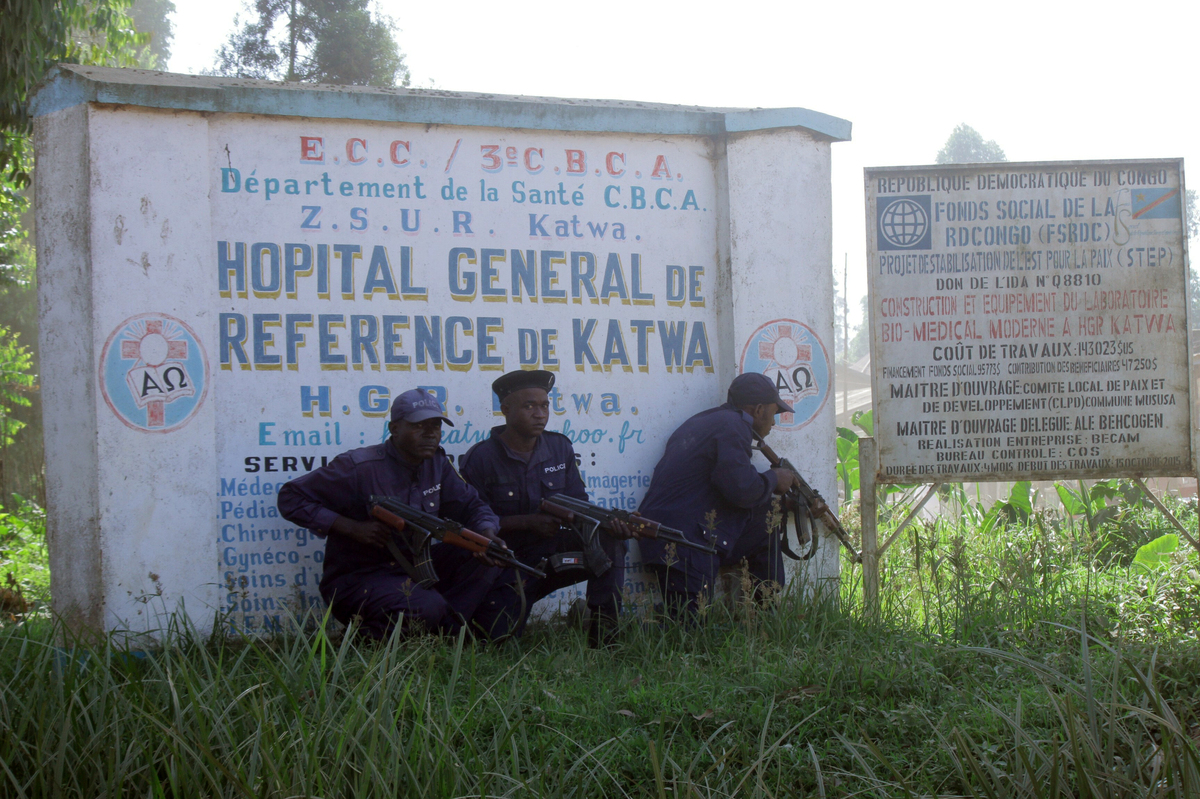 But with each attack, they've had to take time to regroup and reassess their security precautions. And that has required pausing key activities such as vaccinating people exposed to the virus. The result has been a surge of new infections. Before the first major attack in February there were roughly 30 new cases a week; this month the weekly new case count has regularly hovered around 70 and even reached as high as 110.

That pattern seems likely to repeat itself in the aftermath of the attack that killed Mouzoko.

Yao says the team has substantially cut back its operations, while officials assess how to keep them safe.

At a recent all-staff meeting, says Yao, several team members expressed openly what Mouzoko had reportedly been feeling privately – that this work might simply have become too dangerous.

"It's quite tough," says Yao. "People are scared. I saw many people crying, even two, three days after [the attack]. Our colleagues are totally in shock."