Accessibility links
Targeted For Violence, Health Workers In Ebola Hot Zone Threaten To Strike : Goats and Soda Threats and attacks have become a way of life — even for staff at regular hospitals. For the simple act of referring patients to Ebola treatment centers, they have become targets. 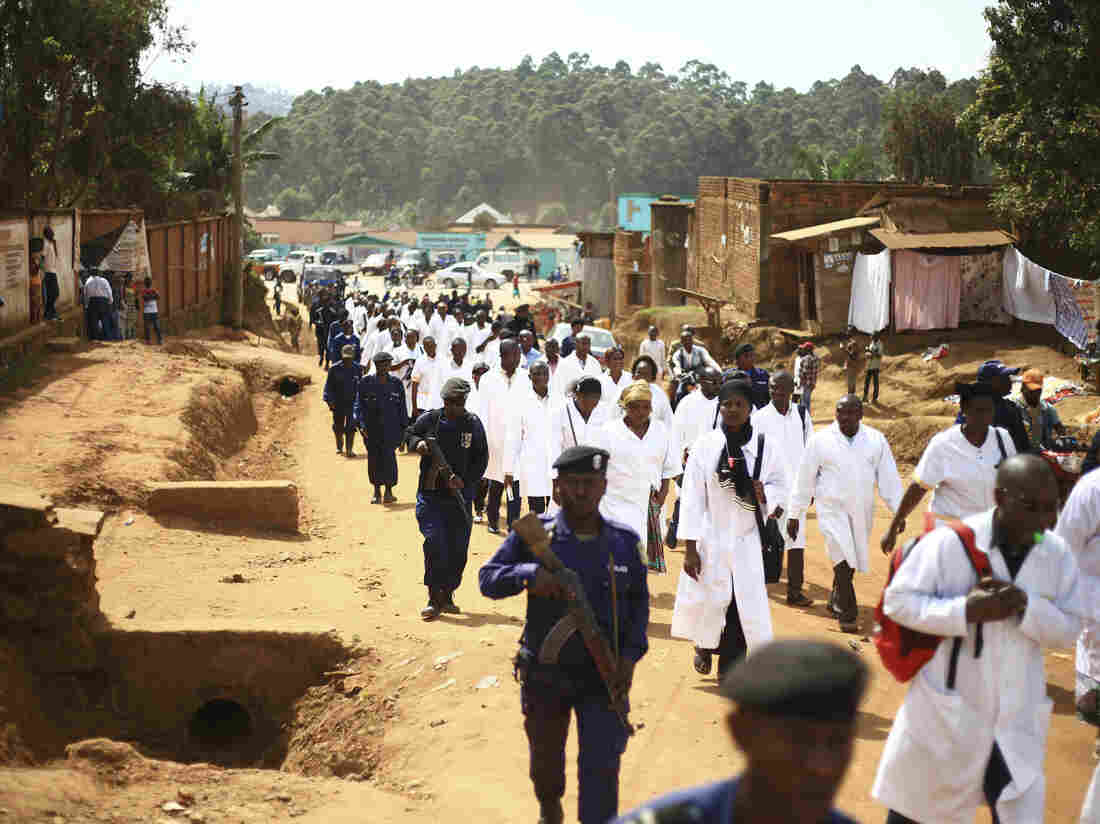 Health workers marched in Butembo on Wednesday to protest the violence they're facing. The demonstration comes in the wake of an attack last Friday in which an epidemiologist from Cameroon was shot and killed. Al-hadji Kudra Maliro/AP hide caption 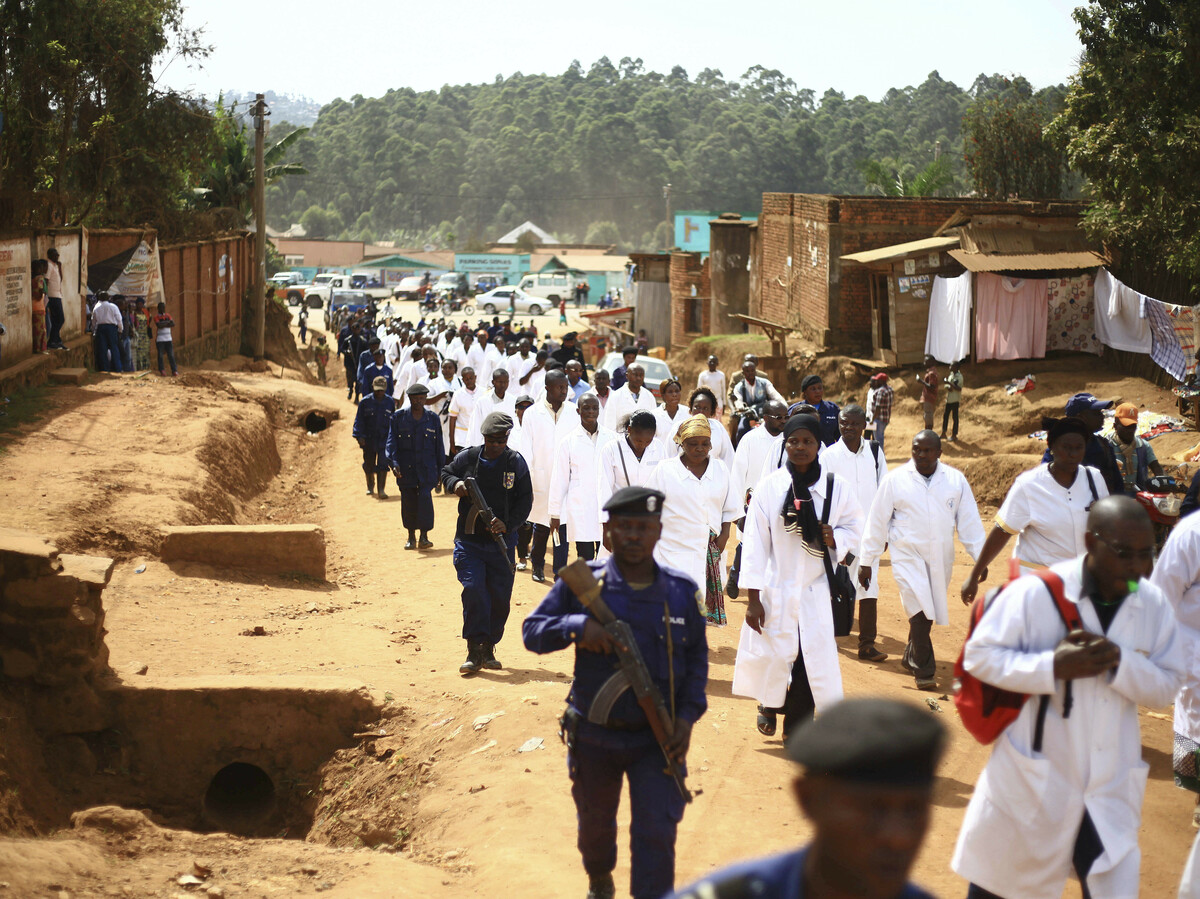 Health workers marched in Butembo on Wednesday to protest the violence they're facing. The demonstration comes in the wake of an attack last Friday in which an epidemiologist from Cameroon was shot and killed.

The doctors and nurses who work in the heart of the Ebola outbreak zone in Democratic Republic of the Congo say they've had enough. For weeks they've been subjected to threats of violence and even actual assaults. On Wednesday they gave the government an ultimatum: Improve security within one week or we'll go on strike.

The workers making these demands include the Congolese staff of two government-run treatment centers for patients with Ebola, but the demand mostly comes from about 200 doctors and more than 1,000 nurses who work at hospitals and health centers across Butembo, a city that's the current hot spot of the outbreak.

In many ways the staff members at these medical facilities are at the front line of the Ebola response. They are often the ones who first notice possible signs of infection in patients and refer them to an Ebola treatment center. But after years of civil war, the population in the area is deeply mistrustful of authorities. Many in the community think that Ebola is a scam — or worse yet a disease that foreigners have brought to make money off the local population. So through the simple act of referring Ebola patients to treatment centers, doctors and nurses have become targets.

The head of the medical association for Butembo, Dr. Kalima Nzanzu, says his members are regularly menaced not just at their place of work but in their neighborhoods. And there have been several instances of shooting attacks against medical workers.

Complicating matters, the government and the World Health Organization have based many of their local Ebola response teams at hospitals and health centers. These teams fan out through the community to identify people who have been exposed to an Ebola patient, vaccinate them and monitor them for signs of the virus.

Late last week, two such Ebola command centers at local hospitals were attacked, and an epidemiologist from Cameroon with the World Health Organization was gunned down.

His killing proved a tipping point. On Wednesday, streams of Congolese doctors and nurses poured into Butembo's streets, marching in their white coats to register their outrage. Then they presented a memorandum to Butembo's mayor, outlining their demand for greater security — and their threat to strike.

Nzanzu says they are not calling for specific security measures. "It is the mayor's job to determine how to keep us safe," he says. But unless they see a reduction in the intimidation and assaults within the next week, "we will strike."

Nzanzu adds that at least for now, the strike would not extend to the two Ebola treatment centers in the Butembo area, both of which have faced attacks since February. But the strike would mean that the medical staff at practically every hospital and health center in the area would stay home.

That has serious implications for the millions of people who live in the area – many of whom are extremely poor and at risk from a range of other serious health threats such as malaria and acute malnutrition.

And the impact on the Ebola outbreak could be catastrophic. As it is, after each attack Ebola responders have had to temporarily suspend vaccinations and other key activities while reassessing security measures. And during that period infections have surged – bringing the weekly new case count to record levels this month, as high as 110. The total number infected since August is now more than 1,300.

A spokesman for Congo's Ministry of Health, Jessica Ilunga, expressed solidarity with the health workers. "[Our] position is to respect their decision," she says. "We know they are risking their lives just for doing their job. We will not force any of our staff to work if they don't feel safe."