Accessibility links
Cyclone Idai Has Made It Harder For Mozambique's Kids To Get An Education : Goats and Soda Cyclone Idai damaged over 600 schools in Mozambique. Teachers and administrators struggle to rebuild and keep kids in class in the aftermath.

Students In Mozambique Are Afraid The Winds Will Blow Them Away

Students In Mozambique Are Afraid The Winds Will Blow Them Away 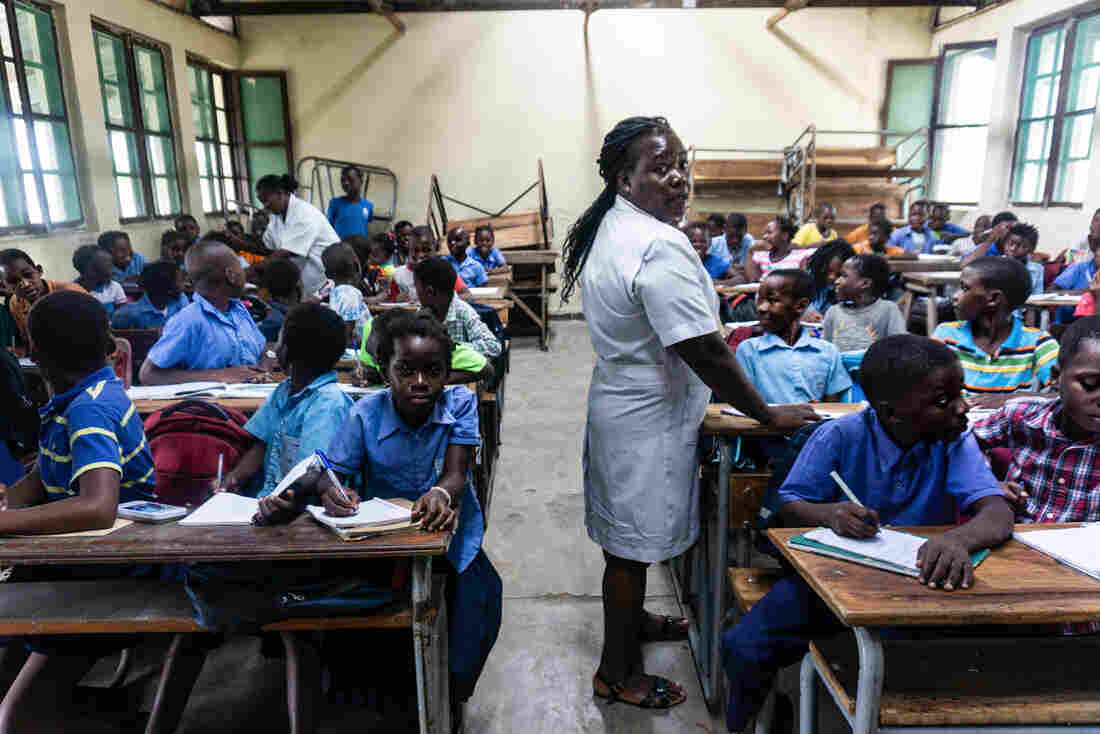 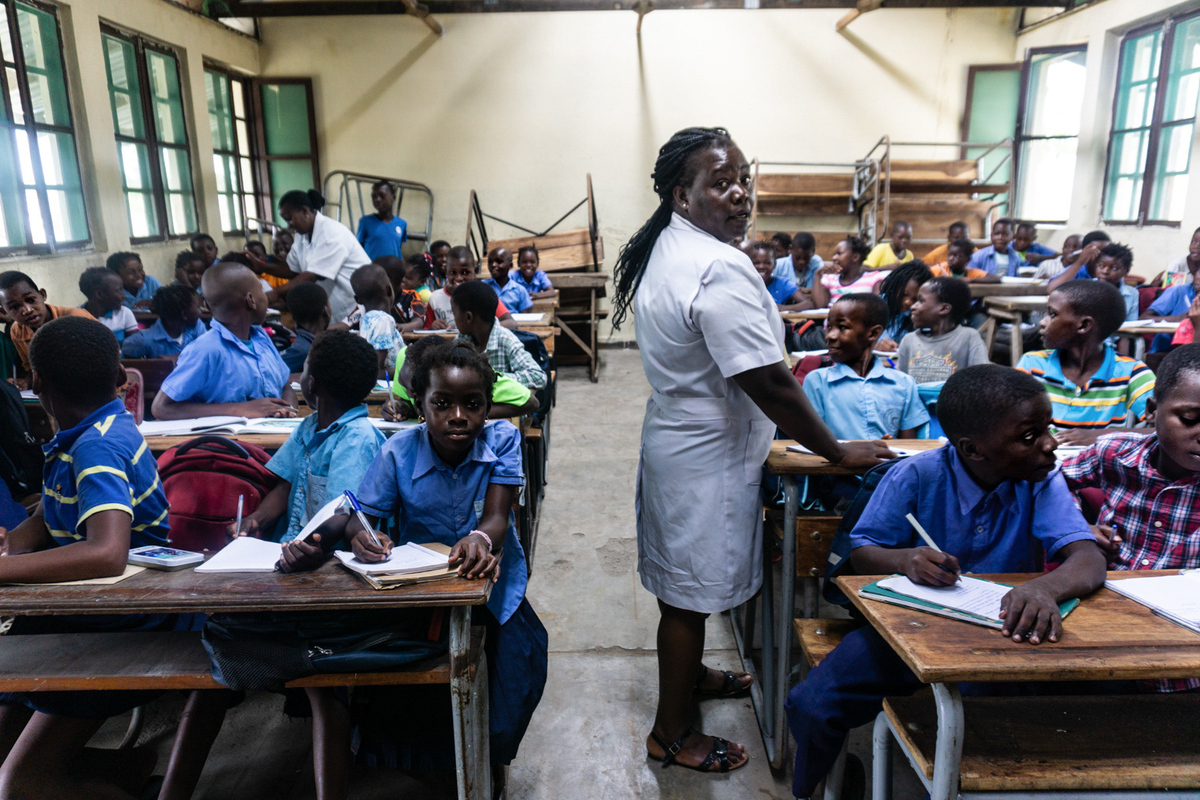 School is harder than it's ever been for 13-year-old Antonia Manuel Tom, a seventh grader at Eduardo Mondlane Primary Completion School in Mozambique.

She's got no textbooks or notebooks. She doesn't get enough to eat. And when rain begins to fall, she and her classmates grow nervous. "I'm scared if another cyclone comes, it will take our house and the wind will blow us all away," she says.

When Cyclone Idai hit the shores of Mozambique on March 14, the wind did blow away a great deal. Hundreds of people died. Houses were destroyed. And across Mozambique's central Sofala Province, over 600 schools were damaged by Cyclone Idai and over 300,000 children have had their learning disrupted, according to UNICEF. 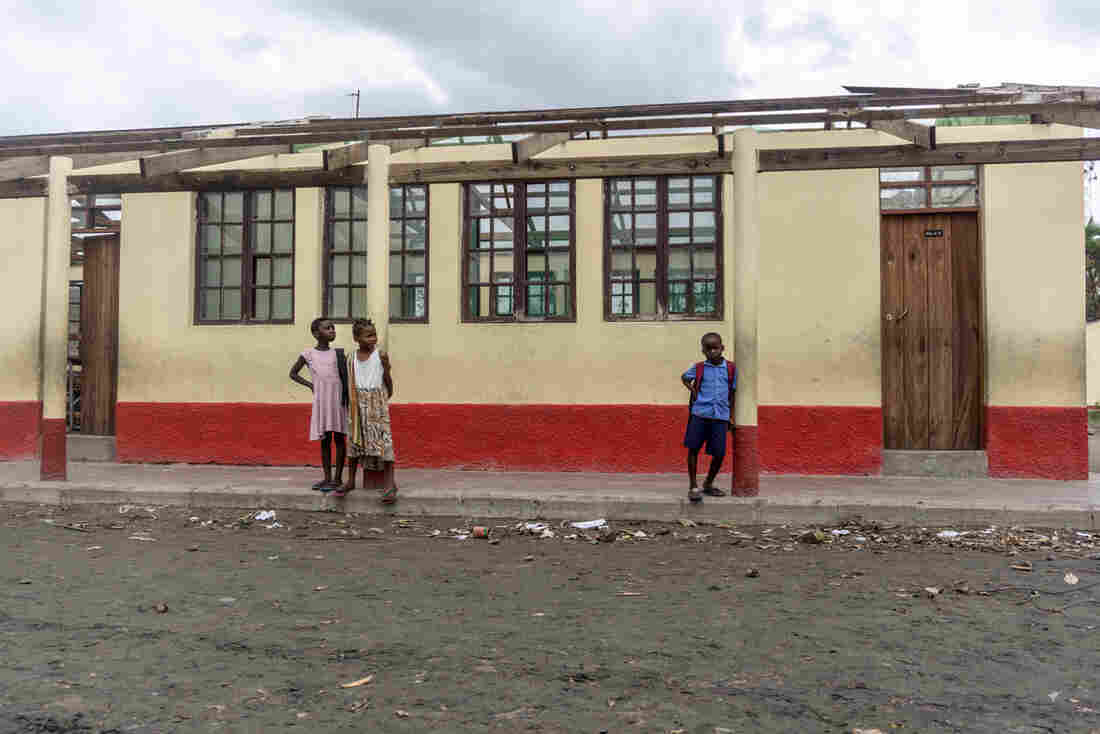 Students at the Eduardo Mondlane school stand next to classrooms destroyed by Cyclone Idai. Tendai Marima for NPR hide caption

Julio Isaac, head of Tom's school, which runs from kindergarten through seventh grade, still struggles to come to terms with the cyclone's toll.

A damp smell lingers in his office. A pile of school records salvaged from the storm sits bundled on a chair; many more were lost in the most devastating cyclone to hit southern Africa in decades. 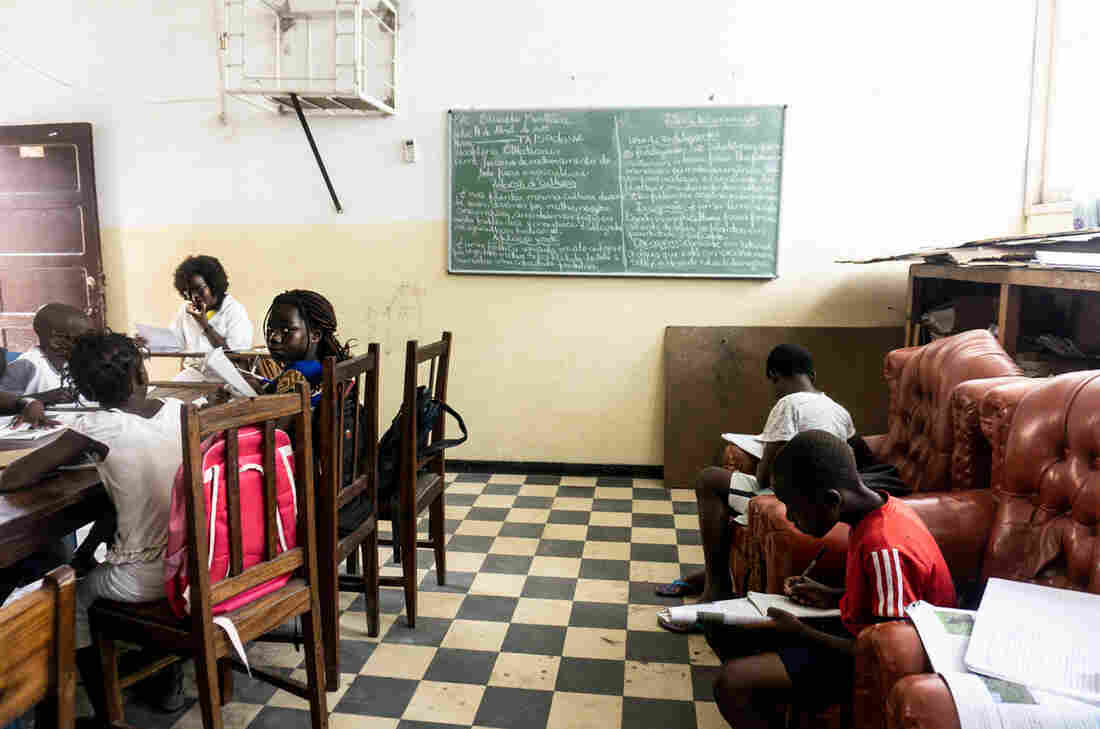 Meanwhile, the teachers and 508 students at Eduardo Mondlane — named for a professor at Syracuse University who was founding president of the country's ruling party — are starting to rebuild.

A lot of work lies ahead. Of the 48 classrooms, 32 were affected by the cyclone. Some have no roofs; others have water damage.

"It's too dangerous to put the children in some classes. The brown watermarks and the long cracks in the ceilings show some of the classrooms are not safe," Isaac says.

So some classes are doubling up. In the staff room, there's a group of seventh graders on each side of the room. The teachers talk at the same time.

Rita Ibrahim John, one of the seventh-grade teachers, says it's distracting. "When they learn together like this, it's hard to teach. The children don't concentrate on what they are doing because they're looking at the other class."

That's not the only distraction.

"A lot of the [students] are affected by their situations at home. Some of their houses got destroyed by the cyclone and some of them lost family members — so they are thinking about all of that," says John. 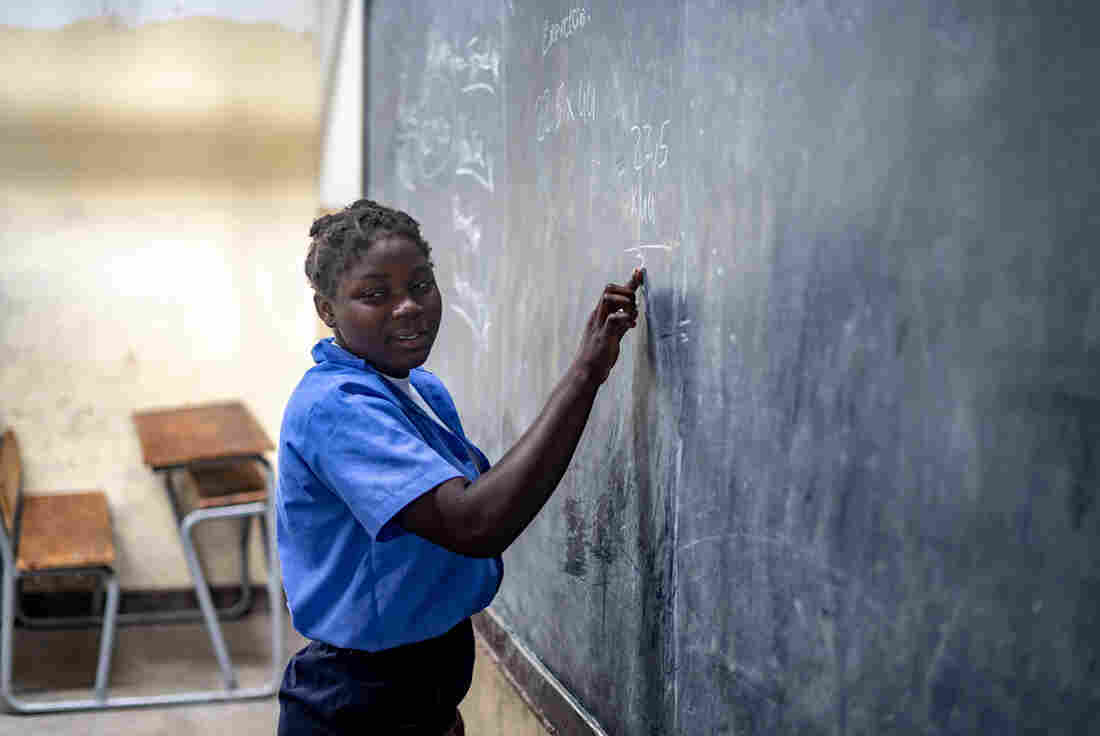 Antonia Manuel Tom, a seventh-grader at the Eduardo Mondlane school, says making it through a day of school is tough because she's not getting enough to eat. Tendai Marima for NPR hide caption

Antonia Manuel Tom, who's in John's class, is definitely preoccupied. Her family home was destroyed by the storm; she and her parents are living with relatives. "It's hard for me to come to school because I don't have food to eat at my aunty's house," she says.

"When we get food, we get it from the tents [that provide emergency aid], but it's not enough. I spend many hours learning at school so by the time I get home I'm so hungry and tired. We are staying with aunty and her family, but there's never enough food," she adds.

Isaac acknowledges that hunger is one of the most common complaints he hears among Eduardo Mondlane's schoolchildren, who range in age from 4 to 13. "It really affects their concentration," he says.

There are mental health issues as well. Save the Children, a U.K. global charity, in report published last week, surveyed 100 affected children in Beira and found signs of "severe psychological stress, including bedwetting, nightmares and anxiety."

Another worry is that families is the impact of the cyclone on the school dropout rate. Ordinarily, fewer than half of the country's 13 million children under 15 complete primary school, which runs from kindergarten to seventh grade and is free and mandatory. But fewer than 20 percent of registered students continue on to high school; they may drop out because their parents can't afford to pay secondary school fees.

"If families whose property or livelihoods have been negatively affected by the cyclone are forced to send their children to work to make ends meet," UNICEF said in a statement last week.

Isaac is concerned some seventh graders — the final year of elementary school in Mozambique — might opt to earn an income doing menial jobs instead of continuing with their education.

"Most of these children come from the township [a poor neighborhood] in Dondo. The families don't have much, so some [parents] might end up [sending their kids] to the field [to work] instead of coming back to school," he says. "Without a qualification they won't get far."

Meanwhile, other parts of Mozambique are facing an imminent weather threat. Cyclone Kenneth has made landfall in the remote northern regions of Mozambique and southern Tanzania this week. Although the typhoon might not be as deadly as Cyclone Idai, which killed over 1,000 people across Malawi, Mozambique and Zimbabwe, it could be a further setback to the coastal nation.