Accessibility links
Syrian Refugee Women Help Design A Meal Kit Of 'Mujaddara' For Displaced Syrian Families : Goats and Soda Refugee women from a group called Newcomer Kitchen are cooking traditional Levantine food for their community in Toronto — and have found a way to share it with displaced Syrians in the Middle East. 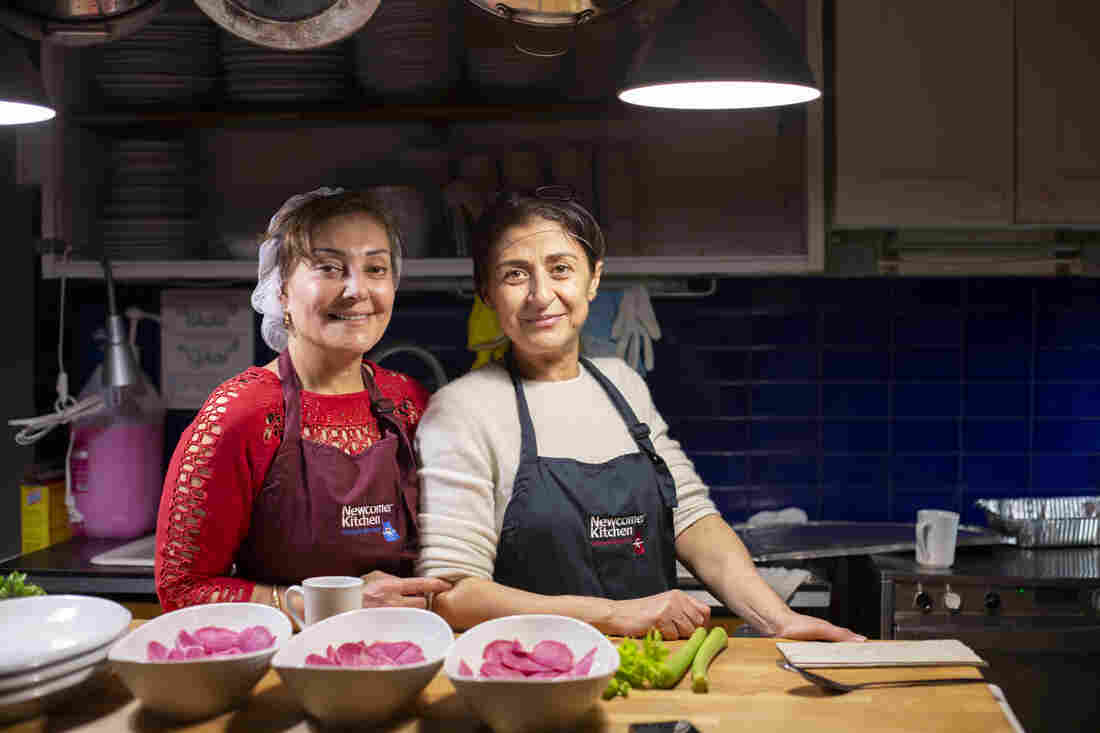 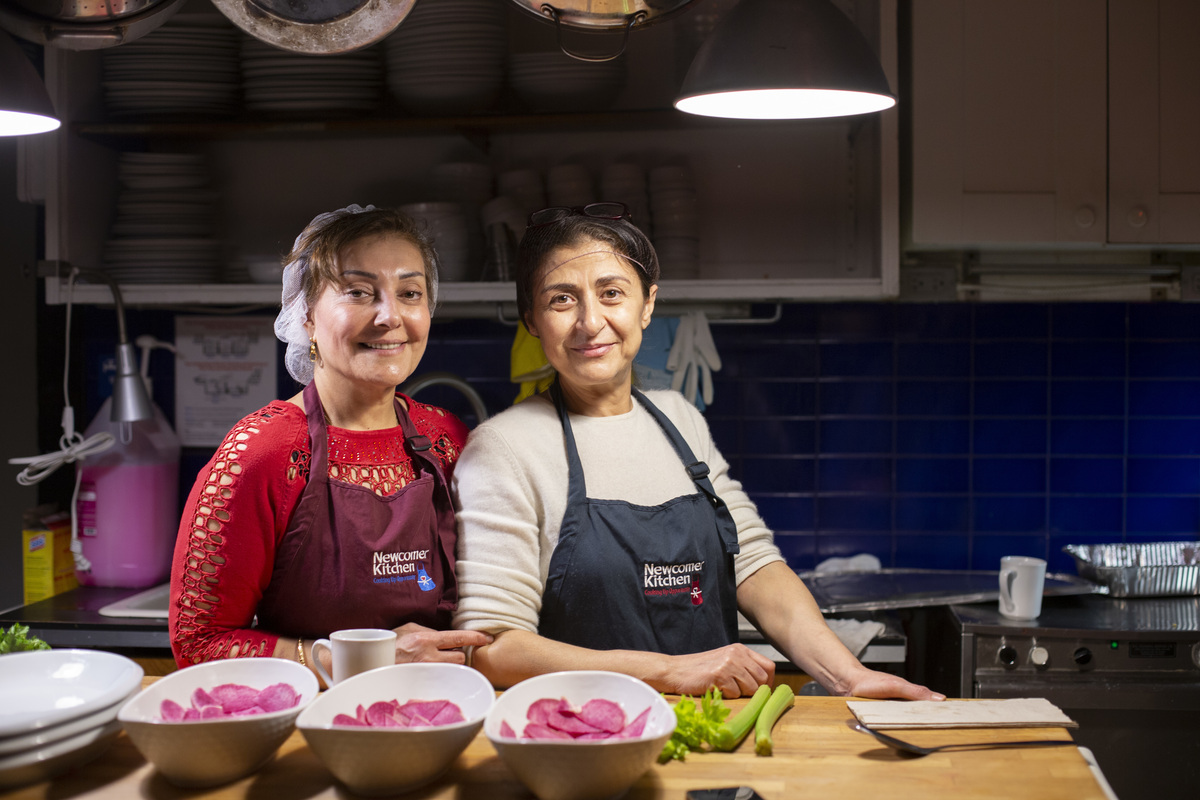 In 2016, two Canadians had a novel idea. They wanted to welcome the first wave of Syrian refugees to Toronto — who had fled from their country's ongoing civil war — by inviting women to cook familiar foods for family and friends in a pop-up kitchen.

"It was key that we provided a space where newcomers to Canada could talk about their struggles integrating into Canadian society," says Cara Benjamin-Pace, co-founder of Newcomer Kitchen, as the project is called.

"It was a cultural thing, too," she adds. "Syrian women don't cook alone."

Together, the refugees cooked traditional Levantine dishes: fragrant rice and chicken with nuts, cucumber salad and a grain dish called freekeh. The women made friends, reminisced about home and connected with the community.

Now, Newcomer Kitchen is bringing meals to displaced Syrian families in camps across the Middle East.

It's part of a partnership that started last year with GlobalMedic, a nonprofit focused on providing humanitarian aid to crisis zones. More than 500,000 meal kits have been sent to Syria and refugee camps in surrounding countries so far.

Over 13 million Syrians are in need of humanitarian assistance, according to Marwa Awad, a spokesperson for the World Food Programme in Syria. Of these, 6.5 million do not have adequate access to nutritious, affordable food.

The WFP and its partners are able to assist about 3 million people every month in Syria, says Awad. Other local and international humanitarian groups, like GlobalMedic, also play a role in providing food aid to the country.

Benjamin-Pace and Len Senater, the project's other co-founder, say they jumped at the opportunity when they were approached by GlobalMedic in 2017 to partner on a new food aid program.

"Many of our women were in tears" when they found out about the partnership, says Benjamin-Pace. "It was the first time I saw a lot of them cry."

Originally envisioned as a temporary charitable project for a dozen women, Newcomer Kitchen has grown into a program with 60 Syrian refugee women on staff. The women earn $11 an hour preparing meals available to purchase ($18 for a three-course meal) and hosting weekly pop-up dinners for the community. There is traditional Syrian food, music and dancing.

Still, the women believed they could do more for displaced families suffering in Syria.

"We were definitely having an impact in Toronto, but the [women] we worked with wanted to make a more tangible impact on their home communities," says Benjamin-Pace. "They see the news of the conflict in Syria and wanted to do more for their families back home."

GlobalMedic – which has provided aid to 60 disaster relief missions around the world — worked with Newcomer Kitchen to design a nutritious meal that would be familiar to those receiving it in Syria, says executive director Rahul Singh.

The women refugee staff suggested meal ideas to GlobalMedic. Then the group attempted to modify their recipes to create a cheaper, non-perishable version. They settled on making meal kits of the traditional Syrian dish, mujaddara, consisting of bulgur, lentils and onions..

Each meal kit feeds six at a cost of just 25 cents per person. The dish is not only a bargain, it's quick: It takes 20 minutes to prepare.

This is the recipe for the meal kit developed by Newcomer Kitchen and GlobalMedic, sent to displaced Syrian families at camps across the Middle East. This dish serves 6 to 8 people, and is often served with pickled vegetables and salad. Recipe courtesy of GlobalMedic.

1. In a covered pot, bring 8 to 9 cups of water to a boil.
2. Add lentils, cover and boil for 7 minutes.
3. Add remaining ingredients to the lentils and bring to a boil. Reduce heat and let simmer for 15 minutes.
4. Remove from heat and let stand for 10 minutes, covered.

Donations from individuals and companies cover the cost of the meal kits, which are assembled by GlobalMedic volunteers. Some women at Newcomer Kitchen have volunteered, too. And a number of companies have also hosted team-building trips in GlobalMedic's factory where they assemble the kits themselves, packing up to 4,000 bags an hour, says Singh.

Once assembled, the food kits are sent by ship to Turkey, then travel overland to northern Syria or refugee camps in bordering countries. GlobalMedic works with a New York-based nonprofit called the Multifaith Alliance for Syrian Refugees to arrange transport and distribution of the food packets from Canada to the Middle East.

Shadi Martini, director of humanitarian relief and regional relations at Multifaith Alliance, says the rapid preparation style of the meals has had a huge impact on internally displaced people in Syria.

The Syrian volunteers back in Toronto, meanwhile, are grateful for the chance to give back to their people.

"I'm so excited for this opportunity," says Reshdia Almasri, a Syrian staffer at Newcomer Kitchen. "Finally, it's our chance to help."

Jack Allen studies Russian and journalism at Princeton University. Originally from Manchester, England, he explores the relationship between food, culture and identity. Find him on Twitter @jackloganallen.