Accessibility links
What Makes Girls Take Risks? Insights From A Study On A Matriarchal Society : Goats and Soda Many studies show that women are less willing to take risks than men are. But new research, on girls from a community in China run by women, offers insights into what leads to more risk taking. 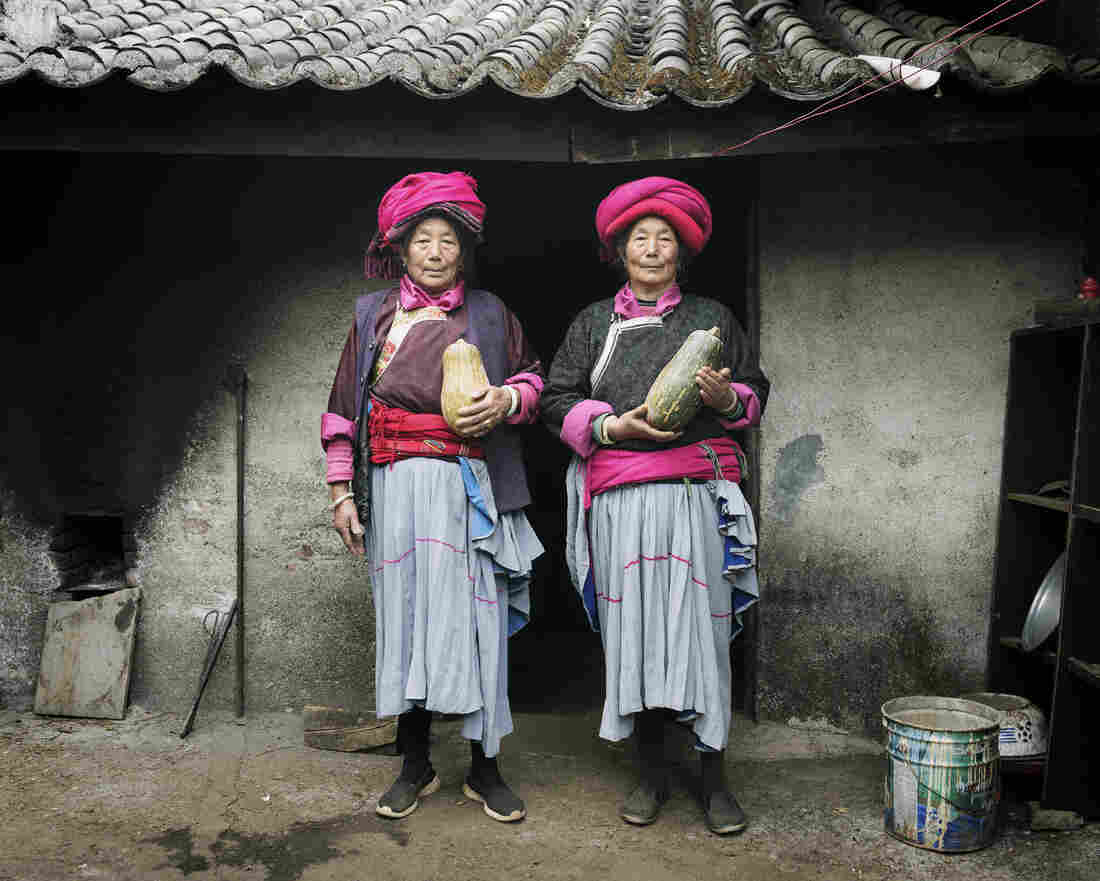 Naju Dorma, 73, and Lacuo Dorma, 66, belong to the Mosuo society in China, where grandmothers head up households. They're posing in traditional garb in their village of Luoshui. Karolin Klüppel hide caption 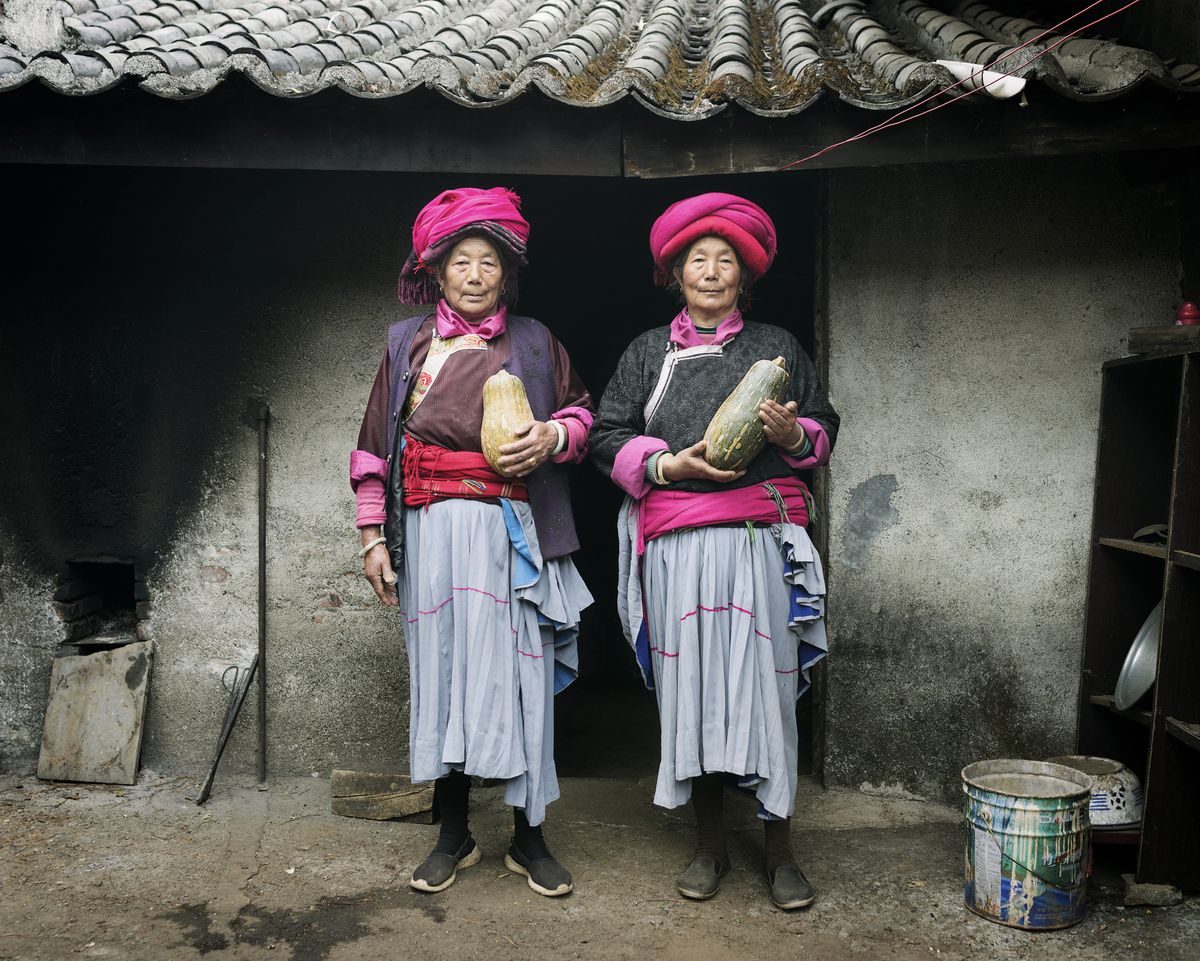 Naju Dorma, 73, and Lacuo Dorma, 66, belong to the Mosuo society in China, where grandmothers head up households. They're posing in traditional garb in their village of Luoshui.

Many studies have found that women aren't as willing as men to take risks. And so they may shy away from riskier investments or career choices, missing out on the rewards that can come from taking big chances.

The perennial question: Why? Is it nature or nurture?

Some researchers have pointed to biological or evolutionary explanations — stemming from the theory that women who care for kids can't afford to take as many risks. According to this school of thought, over time females evolved to be more risk-averse. Others have linked risk-taking to testosterone.

But Elaine Liu, an economist at the University of Houston, never fully bought into that theory. She was always a risk-taker, as far as she can remember. At 16, she decided to leave her small town in Taiwan, and, in search of bigger and better activities, move in with relatives in California.

Liu credits her upbringing for her own venturous spirit. Her mom always told her, "girls could do anything boys could."

So, in her latest study, published in the Proceedings of the National Academy of Sciences, Liu investigates the influence of parents and peers by comparing two groups of children — one raised in a female-led culture and the other in a male-dominated one.

Liu and co-author Sharon Xuejing Zuo at Fudan University in Shanghai found that young girls from the Mosuo community in China, one of the few societies in the world run by women, were bigger risk-takers than boys from the same community. But after the Mosuo girls spent years in schools with boys and girls who came from patriarchal communities, the trend reversed: Older Mosuo girls took fewer chances.

The researchers homed in on a small township in southwest China called Yongning, where Mosuo children attended school with kids from another ethnic group called the Han.

Most people in mainland China identify as Han. And the Han community, like most around the world, has traditionally been patriarchal and patrilineal, with men at the head of households and male children carrying on the family name.

By contrast, the Mosuo, a small group based in Southwest China, have a matrilineal society with grandmothers at the head of households. Mosuo women traditionally choose and change partners as they please and are free to have as many consensual relationships as they like. Fathers aren't necessarily involved in the upbringing of their children, who are raised in multigenerational households run by women.

In Liu's two-year study, about 400 Mosuo and Han students in Yonging from first to seventh grade played a lottery-type game to test their proclivity for risk-taking. Participants were asked to choose a lottery number from one through six. Kids who chose number one were guaranteed to win 3 yuan. The higher the number, the higher the risk — and potential reward. Those who chose the highest number — six — had a 50-50 chance of winning either 10 yuan (enough to buy five notebooks or popsicles at the local shop) or zero yuan.

Among first grade students, the matrilineal Mosuo girls were the biggest risk takers, making bolder choices than Mosuo boys and Han girls and boys. But for kids in higher grades, the trend shifted. Starting in fourth grade and through seventh grade, Mosuo girls took fewer risks than Mosuo and Han boys.

The researchers didn't interview the students about why they chose to either err on the side of caution or take chances — in part because most kids are unlikely to know why. "But also because we didn't want our questions to influence their behavior, or bias them in any way," Liu says.

So the researchers were left to theorize why the children's willingness to take risks seem to shift with age. "We asked ourselves, 'Could it be biology? Something to do with hormones as the girls got older, making them less willing to take risks?'"

But that explanation didn't fit. Although the Mosuo girls took fewer risks as they got older, the Han girls took more chances as they grew up.

"What was really fascinating was the Han girls had a different trajectory," Liu says. In the first grade, Han girls were more cautious than any other group. Though they never took as many risks as the boys, older Han girls tended to make bolder, riskier choices in the game than their younger counterparts.

"If biology couldn't explain the trends, we concluded that it had to be the social environment," Liu says. Perhaps, she speculates, as the Mosuo students spent more and more time with their Han classmates, they internalized the patriarchal idea that boys should take risks, and girls should be more careful.

In fact, in middle school — when 80 percent of the students in Yongning boarded at the school — the researchers found that Mosuo boys who lived with Han roommates tended to take more risks than those whose roommates were also Mosuo. "So they're spending more time with their peers than their parents," Liu says.

But peer pressure may not be the only force shaping and shifting the kids' attitudes and actions. "It could be the TV shows they watch to the music they listen to. Or it could be their teachers — all of which we didn't account for in our study," Liu notes.

Regardless, the results make one thing clear, says economist and social scientist Rachel Croson, who was not involved in the study: "The risk-taking differences that we see between men and women are more nurture than nature.

First, says Corson, who is dean of the College of Social Sciences at Michigan State University, the study seems to prove that young girls from a matrilineal society where women have leadership roles tend to make bolder choices than girls from a patriarchal society.

"Then, when the girls from the matrilineal society walk into a situation where risk-taking by women is not encouraged or rewarded, their behavior changes," she says.

The results fit with previous research findings that attitudes toward risk vary across countries and cultures, that they can change over people's lifetimes — and that they are affected not just by gender but also life experiences.

Liu's research is limited by its small size, Carson notes. Plus, her study — and most studies on risk and gender — don't account for the full range of possible gender identities and experiences.

Still, the study's revelations have real-life implications, Carson says: "When the dominant culture discourages or hinders girls who want to take big chances, they may, as grown-ups, hesitate to negotiate for higher salaries or choose riskier but higher paying jobs."