Accessibility links
'How To Write About Africa' — The Satiric Essay By The Late Binyavanga Wainaina : Goats and Soda The Kenyan writer died on Tuesday. Here is his famously sharp-edged essay.

Binyavanga Wainaina Tells Us 'How To Write About Africa'

Binyavanga Wainaina Tells Us 'How To Write About Africa'

Editor's note: Kenyan author Binyavanga Wainaina died on Tuesday, May 22 after an illness. Perhaps his most acclaimed work was the satiric essay "How To Write About Africa," which we are reprinting. 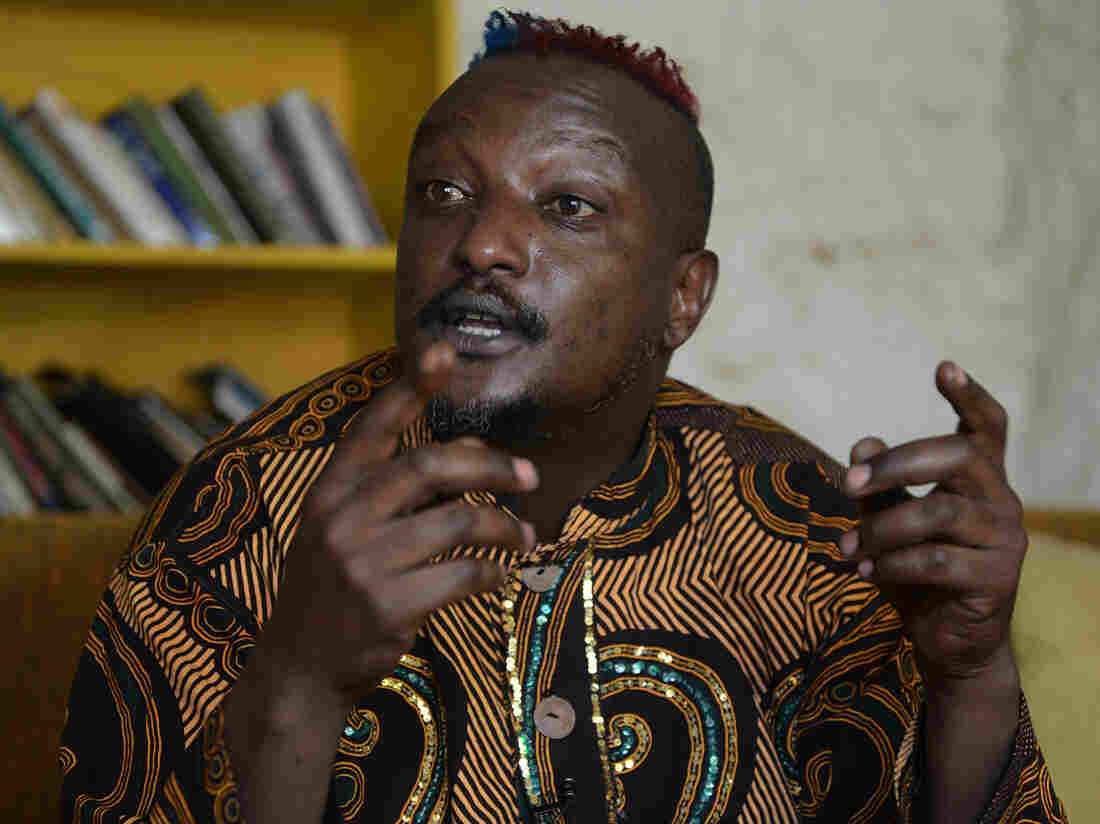 Kenyan author Binyavanga Wainaina, who died on Tuesday. "How To Write About Africa" is perhaps his most famous essay. "Whichever angle you take," he urged, tongue-in-cheek, "be sure to leave the strong impression that without your intervention and your important book, Africa is doomed." Simon Maina /AFP/Getty Images hide caption 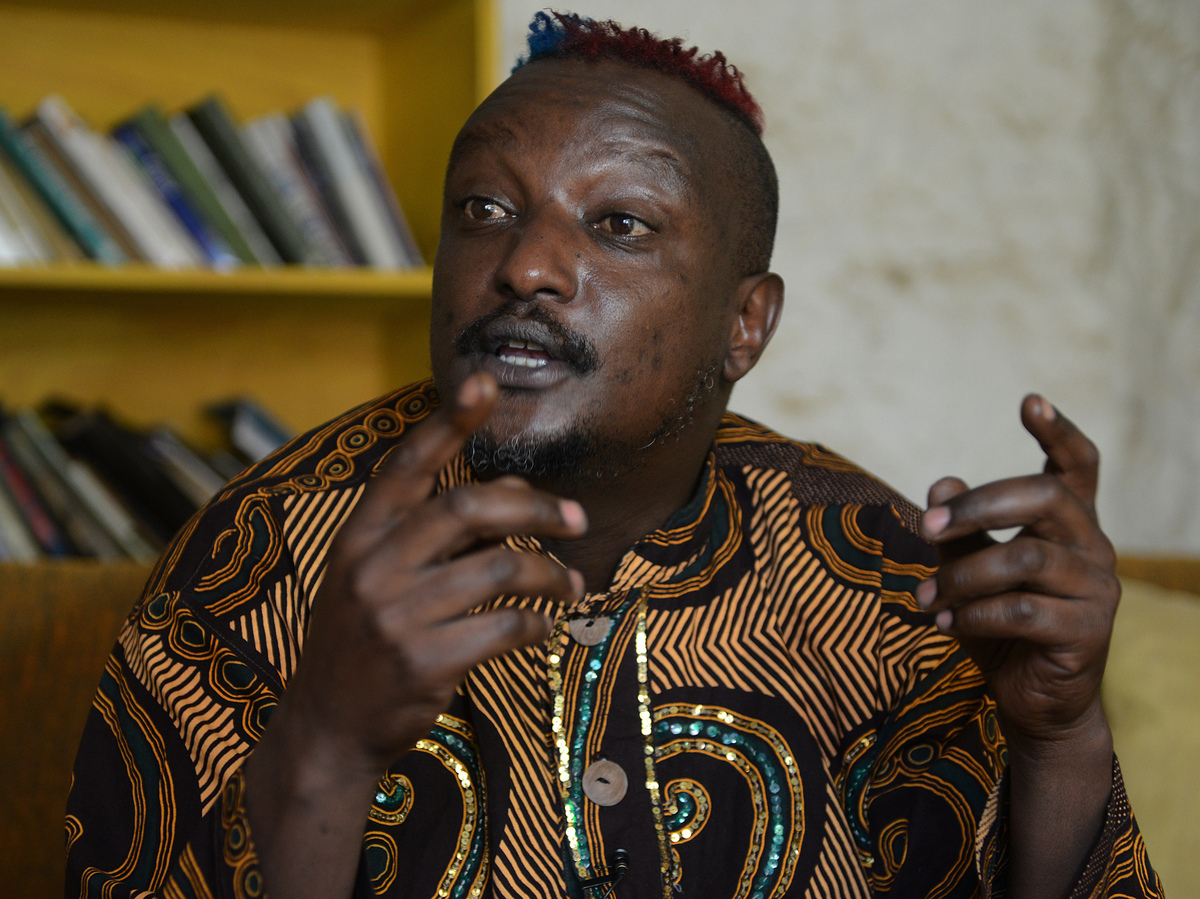 Kenyan author Binyavanga Wainaina, who died on Tuesday. "How To Write About Africa" is perhaps his most famous essay. "Whichever angle you take," he urged, tongue-in-cheek, "be sure to leave the strong impression that without your intervention and your important book, Africa is doomed."

Always use the word 'Africa' or 'Darkness' or 'Safari' in your title. Subtitles may include the words 'Zanzibar,' 'Masai,' 'Zulu,' 'Zambezi,' 'Congo,' 'Nile,' 'Big,' 'Sky,' 'Shadow,' 'Drum,' 'Sun' or 'Bygone.' Also useful are words such as 'Guerrillas,' 'Timeless,' 'Primordial' and 'Tribal.' Note that 'People' means Africans who are not black, while 'The People' means black Africans.

Never have a picture of a well-adjusted African on the cover of your book, or in it, unless that African has won the Nobel Prize. An AK-47, prominent ribs, naked breasts: use these. If you must include an African, make sure you get one in Masai or Zulu or Dogon dress.

In your text, treat Africa as if it were one country. It is hot and dusty with rolling grasslands and huge herds of animals and tall, thin people who are starving. Or it is hot and steamy with very short people who eat primates. Don't get bogged down with precise descriptions. Africa is big: fifty-four countries, 900 million people who are too busy starving and dying and warring and emigrating to read your book. The continent is full of deserts, jungles, highlands, savannahs and many other things, but your reader doesn't care about all that, so keep your descriptions romantic and evocative and unparticular.

Binyavanga Wainaina, Kenyan Writer And LGBTQ Activist, Dies At 48 May 22, 2019

Make sure you show how Africans have music and rhythm deep in their souls, and eat things no other humans eat. Do not mention rice and beef and wheat; monkey-brain is an African's cuisine of choice, along with goat, snake, worms and grubs and all manner of game meat. Make sure you show that you are able to eat such food without flinching, and describe how you learn to enjoy it — because you care.

Taboo subjects: ordinary domestic scenes, love between Africans (unless a death is involved), references to African writers or intellectuals, mention of school-going children who are not suffering from yaws or Ebola fever or female genital mutilation.

Throughout the book, adopt a sotto voice, in conspiracy with the reader, and a sad I-expected-so-much tone. Establish early on that your liberalism is impeccable, and mention near the beginning how much you love Africa, how you fell in love with the place and can't live without her. Africa is the only continent you can love — take advantage of this. If you are a man, thrust yourself into her warm virgin forests. If you are a woman, treat Africa as a man who wears a bush jacket and disappears off into the sunset. Africa is to be pitied, worshipped or dominated. Whichever angle you take, be sure to leave the strong impression that without your intervention and your important book, Africa is doomed.

Your African characters may include naked warriors, loyal servants, diviners and seers, ancient wise men living in hermitic splendour. Or corrupt politicians, inept polygamous travel-guides, and prostitutes you have slept with. The Loyal Servant always behaves like a seven-year-old and needs a firm hand; he is scared of snakes, good with children, and always involving you in his complex domestic dramas. The Ancient Wise Man always comes from a noble tribe (not the money-grubbing tribes like the Gikuyu, the Igbo or the Shona). He has rheumy eyes and is close to the Earth. The Modern African is a fat man who steals and works in the visa office, refusing to give work permits to qualified Westerners who really care about Africa. He is an enemy of development, always using his government job to make it difficult for pragmatic and good-hearted expats to set up NGOs or Legal Conservation Areas. Or he is an Oxford-educated intellectual turned serial-killing politician in a Savile Row suit. He is a cannibal who likes Cristal champagne, and his mother is a rich witch-doctor who really runs the country.

Among your characters you must always include The Starving African, who wanders the refugee camp nearly naked, and waits for the benevolence of the West. Her children have flies on their eyelids and pot bellies, and her breasts are flat and empty. She must look utterly helpless. She can have no past, no history; such diversions ruin the dramatic moment. Moans are good. She must never say anything about herself in the dialogue except to speak of her (unspeakable) suffering. Also be sure to include a warm and motherly woman who has a rolling laugh and who is concerned for your well-being. Just call her Mama. Her children are all delinquent. These characters should buzz around your main hero, making him look good. Your hero can teach them, bathe them, feed them; he carries lots of babies and has seen Death. Your hero is you (if reportage), or a beautiful, tragic international celebrity/aristocrat who now cares for animals (if fiction).

Bad Western characters may include children of Tory cabinet ministers, Afrikaners, employees of the World Bank. When talking about exploitation by foreigners mention the Chinese and Indian traders. Blame the West for Africa's situation. But do not be too specific.

Broad brushstrokes throughout are good. Avoid having the African characters laugh, or struggle to educate their kids, or just make do in mundane circumstances. Have them illuminate something about Europe or America in Africa. African characters should be colourful, exotic, larger than life — but empty inside, with no dialogue, no conflicts or resolutions in their stories, no depth or quirks to confuse the cause.

Describe, in detail, naked breasts (young, old, conservative, recently raped, big, small) or mutilated genitals, or enhanced genitals. Or any kind of genitals. And dead bodies. Or, better, naked dead bodies. And especially rotting naked dead bodies. Remember, any work you submit in which people look filthy and miserable will be referred to as the 'real Africa,' and you want that on your dust jacket. Do not feel queasy about this: you are trying to help them to get aid from the West. The biggest taboo in writing about Africa is to describe or show dead or suffering white people.

Animals, on the other hand, must be treated as well rounded, complex characters. They speak (or grunt while tossing their manes proudly) and have names, ambitions and desires. They also have family values: see how lions teach their children? Elephants are caring, and are good feminists or dignified patriarchs. So are gorillas. Never, ever say anything negative about an elephant or a gorilla. Elephants may attack people's property, destroy their crops, and even kill them. Always take the side of the elephant. Big cats have public-school accents. Hyenas are fair game and have vaguely Middle Eastern accents. Any short Africans who live in the jungle or desert may be portrayed with good humour (unless they are in conflict with an elephant or chimpanzee or gorilla, in which case they are pure evil).

After celebrity activists and aid workers, conservationists are Africa's most important people. Do not offend them. You need them to invite you to their 30,000-acre game ranch or 'conservation area,' and this is the only way you will get to interview the celebrity activist. Often a book cover with a heroic-looking conservationist on it works magic for sales. Anybody white, tanned and wearing khaki who once had a pet antelope or a farm is a conservationist, one who is preserving Africa's rich heritage. When interviewing him or her, do not ask how much funding they have; do not ask how much money they make off their game. Never ask how much they pay their employees.

Readers will be put off if you don't mention the light in Africa. And sunsets, the African sunset is a must. It is always big and red. There is always a big sky. Wide empty spaces and game are critical — Africa is the Land of Wide Empty Spaces. When writing about the plight of flora and fauna, make sure you mention that Africa is overpopulated. When your main character is in a desert or jungle living with indigenous peoples (anybody short) it is okay to mention that Africa has been severely depopulated by Aids and War (use caps).

Always end your book with Nelson Mandela saying something about rainbows or renaissances. Because you care.