Accessibility links
From Jasmine Of 'Aladdin' To Sleeping Beauty: The Impact Of Disney Princesses : Goats and Soda A researcher wanted to see how girls of different nationalities perceived the idea of a princess.

How Disney Princesses Influence Girls Around The World

How Disney Princesses Influence Girls Around The World 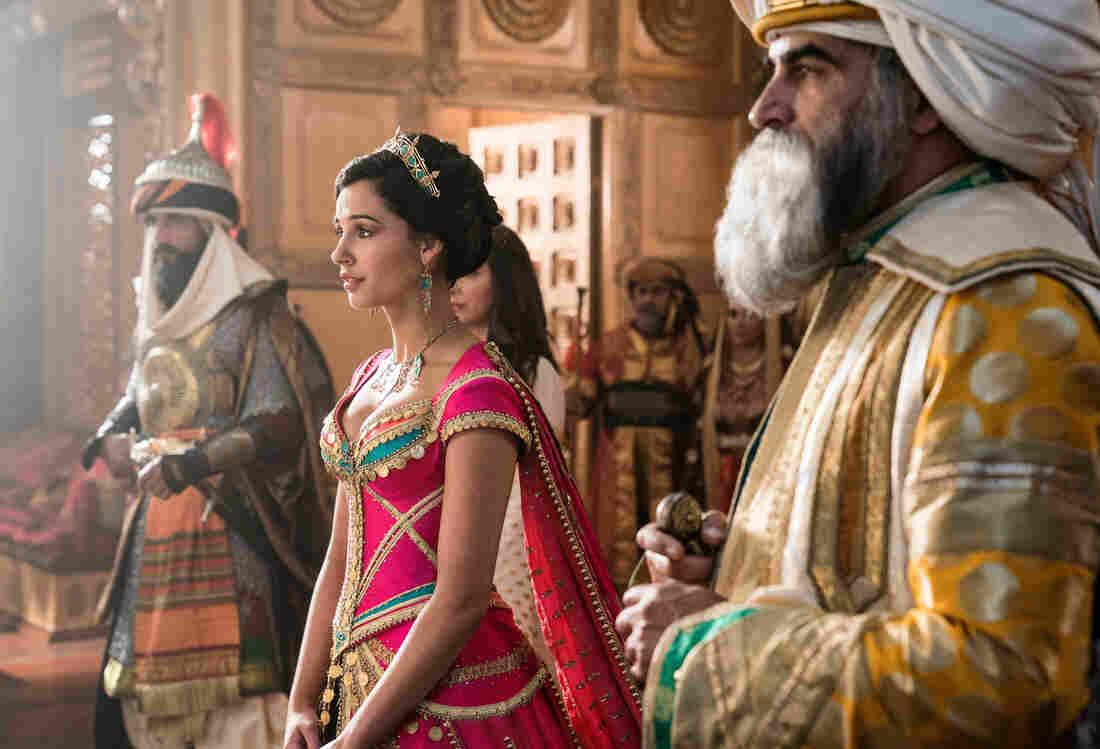 Naomi Scott plays Jasmine in the new live-action Aladdin movie. The character was the first official Disney princess of color in the 1992 animated version of the film. Daniel Smith/Disney Enterprises, Inc. hide caption 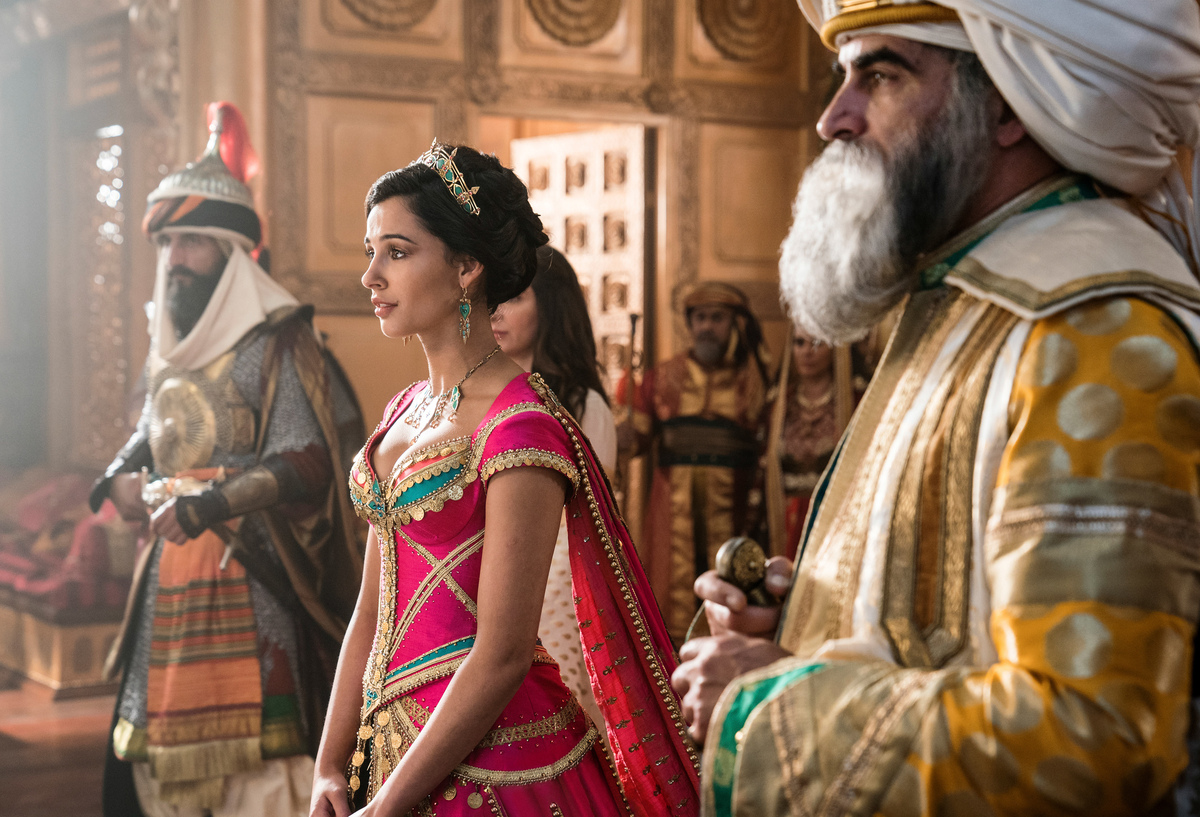 Naomi Scott plays Jasmine in the new live-action Aladdin movie. The character was the first official Disney princess of color in the 1992 animated version of the film.

Many academics and parents have said that Disney princesses are "bad for girls" because they are defined by their appearance – and they often must be rescued by men rather than act on their own (see: Sleeping Beauty and Snow White).

Sociologist Charu Uppal in Sweden has another concern – the fact that many classic Disney princesses are white and Western.

Uppal has been studying the effects of Disney princesses on girls internationally since 2009. In a world where Disney's TV channels are broadcast in 133 countries, and its films and merchandise pervade even more, she wanted to see how girls of different nationalities perceived the idea of a princess.

A New 'Aladdin' Gets Caught In Its Own History

Between 2009 and 2018, she asked nearly 140 girls to draw a princess. They were ages 8 to 15 and lived in five countries — the U.S., China, Fiji, India and Sweden. She then conducted private, 10-to-15-minute interviews with each girl, with questions like, "Who is a princess?" and "What age did you start watching Disney princess films?" and "Do you think you could be a princess?" Most girls said they had been watching Disney films since before they could remember.

Her latest study, published in March in the journal Social Sciences, analyzed 63 princess drawings from girls in Fiji, India and Sweden. In this sample, nearly every drawing — 61 out of 63 — depicted a light-skinned princess, many of those resembling Disney characters. Fijian girls drew multiple Ariels; Indian girls drew Belles and Sleeping Beauties. Not one girl drew a princess in her country's traditional garb.

"We didn't say, 'Draw a Disney princess.' We said, 'Draw a princess,' " Uppal says. "In India, they didn't draw a single girl in a sari, or in Fiji a sulu chamba [traditional Fijian garb]."

Additionally, some girls from non-Western nations — India, Fiji and China — said in their interviews with Uppal that they could not be a princess because their skin was too dark and they were not beautiful enough.

Uppal's study is worth considering despite the relatively small sample size, says Rebecca Hains, a media studies professor at Salem State University in Massachusetts and author of The Princess Problem: Guiding Our Girls Through the Princess-Obsessed Years. (Hains was co-editor of an anthology that published an earlier version of Uppal's work.)

"The kind of work Uppal is doing is quite significant," Hains says. "The U.S. — a country with no royalty – has colonized children's imaginations of what a princess is, and that's something to take seriously."

Disney has made an effort to diversify and empower its princess cast in recent decades, responding to criticisms that the brand is too white and casts women in passive roles. Since the introduction of Jasmine in 1992, four young women of color have been added to the company's official princess lineup: Pocahontas, Moana, Tiana and Mulan.

"The newer princesses of color have definitely expanded the vision of what constitutes a princess," Hains says.

But Uppal says her report would indicate that this new wave of diverse princesses "has not replaced images of popular white princesses in Disney that have a much older and global presence." Most girls surveyed preferred the "classic," white princesses to Mulan and Jasmine. And while not all girls in India and Fiji were familiar with Aladdin, Mulan and Pocahontas, nearly all had watched Cinderella and Snow White.

Asked by Uppal about the origins of princesses like Jasmine and Mulan, a number of girls in India and Fiji maintained these princesses were "American," not from the Middle East or China as the movies portray.

It's not that girls should want to be princesses, Uppal notes. Her concern is that the girls in her study said they lack what they perceive as princess characteristics – beauty, desirability and Americanness.

"Beauty in itself isn't inherently good or bad, but it's been assigned this importance culturally as what makes someone who is female valuable. At the very least, we hope a girl doesn't feel excluded from having value," Hains says.

Of course, Disney is not solely responsible for white and Western notions of beauty: Both Fiji and India were colonized for many decades, ingraining the concept of whiteness-as-beauty before Disney products ever reached their shores. But Uppal's findings show that Disney may bolster these notions, Hains says.

"It's another data point that reinforces these stereotypes and harmful beliefs about who's good enough and who can be considered beautiful."

Susie Neilson is an intern on NPR's Science Desk. Contact her @susieneilson