Accessibility links
Fact-Checking 'The Hot Zone,' The NatGeo Series About A 1989 Ebola Crisis : Goats and Soda 'The Hot Zone,' a miniseries on the National Geographic Channel, was "inspired" by a 1989 Ebola crisis in the U.S. We asked virologist Thomas Geisbert, who was on the scene. 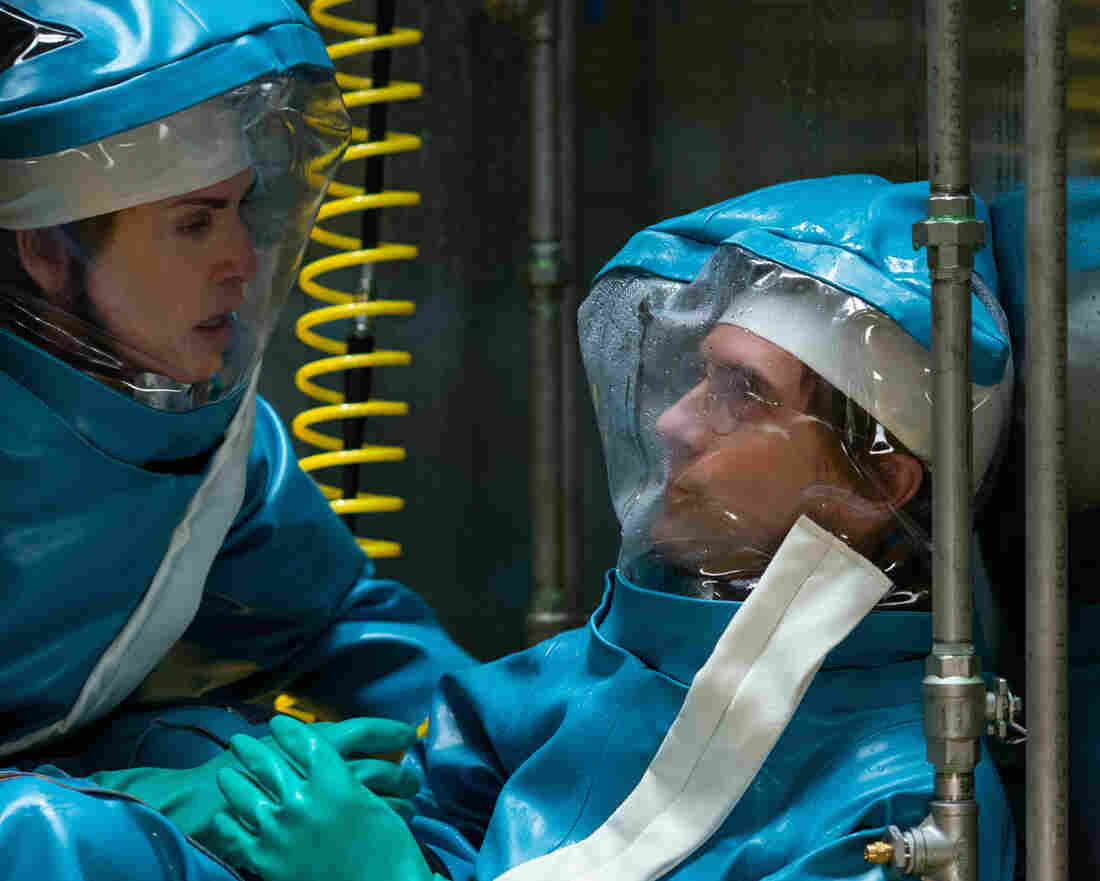 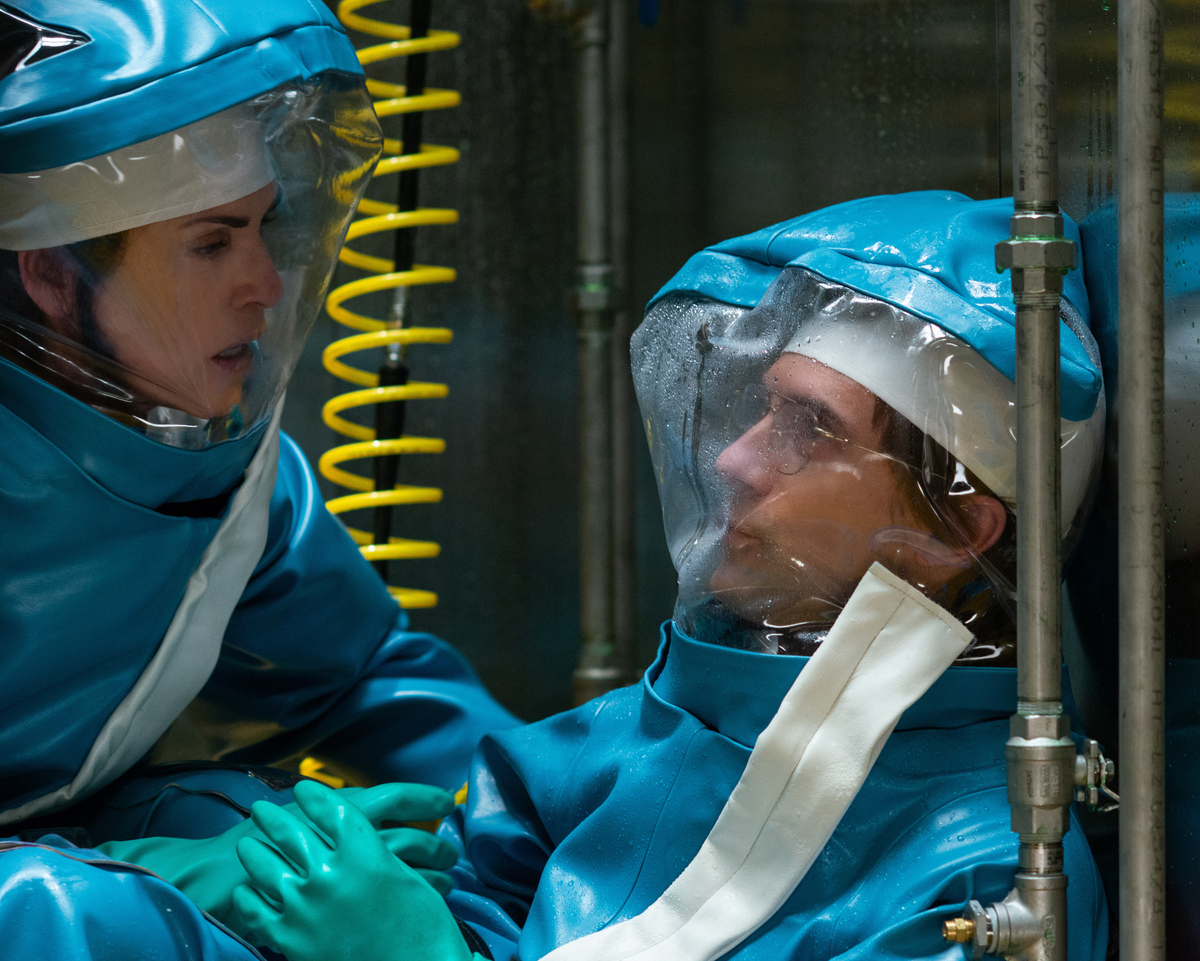 Dr. Nancy Jaax (Julianna Margulies) finds Dr. Peter Jahrling (Topher Grace) and shakes him awake to make sure he is OK during the Ebola investigation.

The Hot Zone, a six-part National Geographic miniseries that premieres Monday night, is based on a true story about Ebola.

In 1989, a shipment of monkeys from the Philippines arrived at a private commercial lab in Reston, Va. The intention was to use the macaques for testing. Only many of them died.

The lab wrapped infected monkey cells in aluminum foil and shipped them in a box to the U.S. Army Medical Research Institute of Infectious Diseases (USAMRIID), in Frederick, Md.

The eventual finding: The monkeys had Ebola – a strain that came to be known as Ebola-Reston and that is, as it turns out, the only known strain of the potentially fatal virus that is not thought to be lethal in humans.

Thomas Geisbert, then an intern at USAMRIID, was a member of the team investigating the virus. As a professor of microbiology and immunology at the University of Texas, he continues working with viruses like Ebola.

National Geographic is hedging about accuracy — it says the series was "inspired" by the 1989 events. And they are airing a documentary on Wednesday at 11 p.m. about the virus: "Going Viral."

Nonetheless, at a time when Ebola is still in the headlines, with an ongoing outbreak in Democratic Republic of the Congo, we wanted to assess how the miniseries tackles the virus. What does it get right? What does it get wrong? So we asked Geisbert to critique and fact-check.

Geisbert says he's sure the series "may be entertaining for the general public, but it is quite flawed in terms of any historical accuracy and there are numerous scientific flaws."

A few of the flaws:

No blisters. In the opening scenes, a man in an African town becomes ill and breaks out in multiple large blisters all over his face. A doctor ultimately diagnoses him with Marburg, a viral cousin to Ebola. But while Marburg and Ebola can cause a rash, they wouldn't cause marble-size blisters as the show portrays, says Geisbert.

Dr. Jaax didn't ID the virus. Nancy Jaax, a U.S. army veterinary pathologist (played by Emmy winner Julianna Margulies) is depicted as identifying the virus. In fact, Geisbert says humbly, he was the one who identified the strain along with Peter Jahrling, then a medical officer at USAMRIID and now chief of the Emerging Viral Pathogens Section of the National Institute of Allergy and Infectious Diseases. (He's played by Topher Grace of That '70s Show fame.) While Geisbert is named in the book on which the TV show is based, he's not a character in the miniseries.

Culturing clash. "Medically speaking Nancy is a veterinary pathologist not a virologist or microbiologist," says Geisbert. "The whole sequence of events where she is trying to culture the virus is a joke. Pathologists don't do that — virologists do."

Ebola-Reston can't make humans sick. In the miniseries, a worker at the monkey lab gets sick and is taken to the hospital, seemingly because of his exposure to infected monkeys. In fact, one lab worker did get sick but the issue was his diabetes, says Geisbert, who adds that workers exposed to the strain did develop antibodies to Ebola as a result.

Glove goof. Nancy Jaax is wearing protective gear as she works to identify the virus in the TV show. She comes in contact with Ebola-infected monkey blood despite wearing gloves – and the blood touches an open wound. She did in fact have a glove issue in another case but not when investigating Ebola-Reston, says Geisbert. What's more, in the TV series she is quickly given the all-clear but at that time, says Geisbert, she would have had to be quarantined for at least days and possibly weeks while awaiting test results if there had in fact been exposure to the virus.

Despite the inaccuracies he saw in the series, Geisbert says, "I do think raising public awareness [of Ebola] is not a bad thing."

And he was gratified by the positive depiction of USAMRIID. "The miniseries does showcase people who devoted their lives to science," he says. "You may not get much accurate science, but you may say, 'Wow, that's a cool thing to do when I grow up. And that's a good thing."

Fran Kritz is a health policy reporter based in Washington, D.C. Her work has appeared in The Washington Post and Kaiser Health News. Find her on Twitter @FranKritz