Accessibility links
Genetic Modification Of Fungus To Kill Mosquitoes Raises Hopes — And Doubts : Goats and Soda The modified fungus produces spider toxin that rapidly kills mosquitoes, raising hopes for a new weapon to fight a disease that sickens millions. But not everyone is convinced. 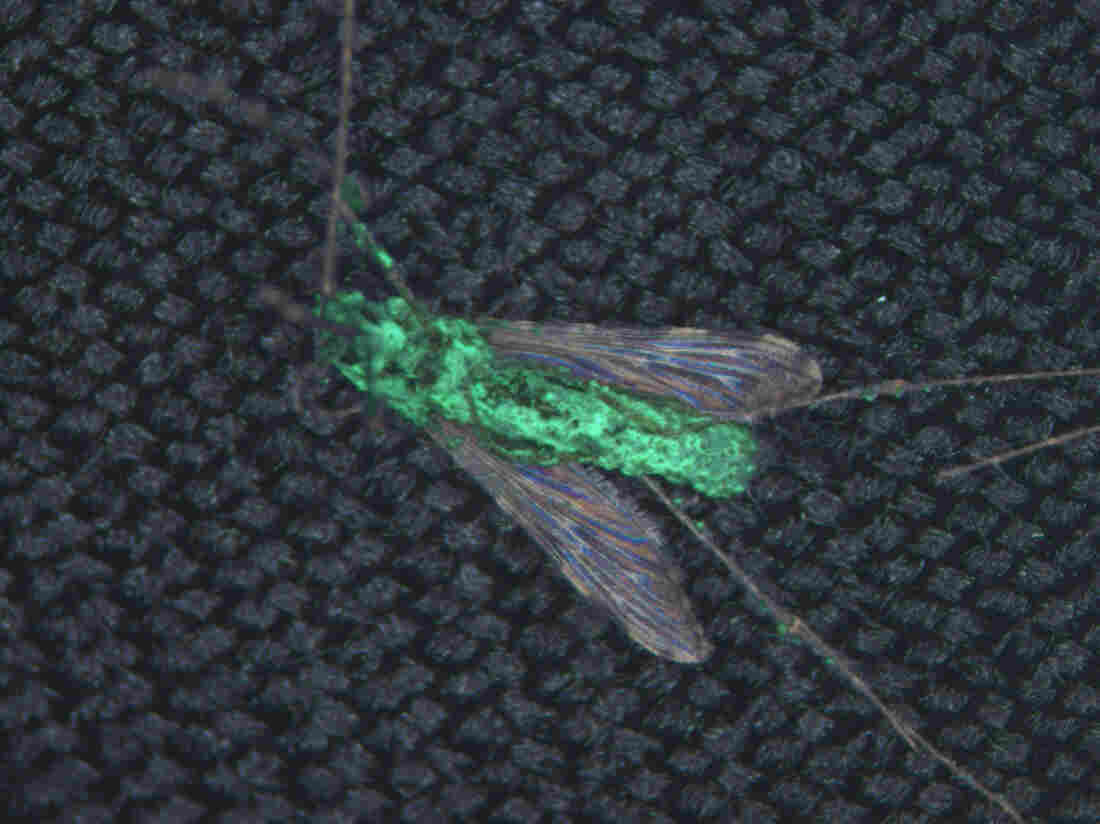 An Anopheles coluzzi mosquito, which can transmit malaria, with a genetically modified fungus emerging from the body after the insect's death. A green fluorescent protein was included to mark the fungus, shown under a UV light. Courtesy of Brian Lovett hide caption 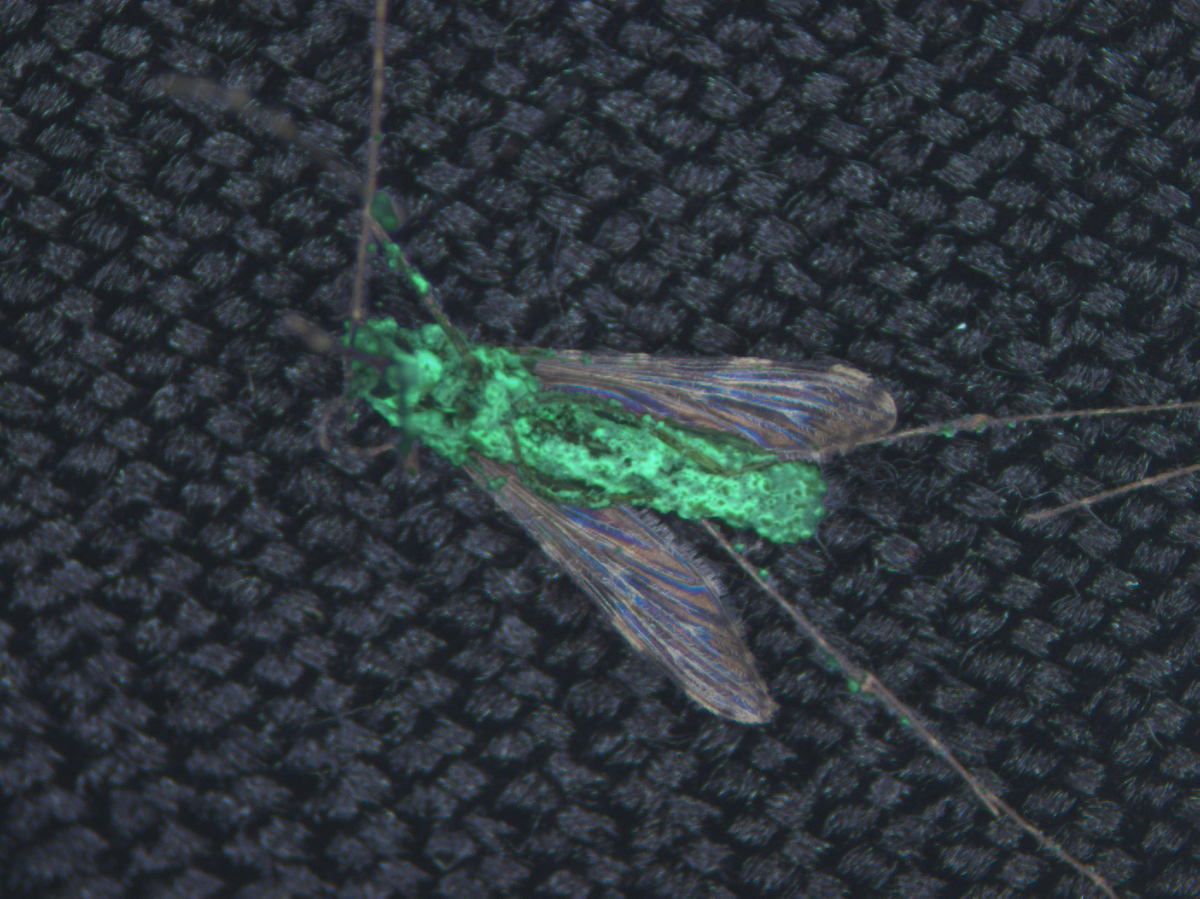 An Anopheles coluzzi mosquito, which can transmit malaria, with a genetically modified fungus emerging from the body after the insect's death. A green fluorescent protein was included to mark the fungus, shown under a UV light.

In the hope of finding a new way to fight malaria, scientists have used a spider gene to genetically engineer a fungus to produce a venom that can quickly kill mosquitoes.

The modified fungus was a highly effective mosquito killer in the first tests mimicking conditions in sub-Saharan Africa, where malaria remains a major public health problem, researchers reported Thursday in the journal Science.

"We're very excited," says Raymond St. Leger, a professor of entomology at the University of Maryland who led the research. "The results are very good. This could save many lives."

Other researchers who are not involved in the research praised the advance.

"I think it's an important step forward," says Marcelo Jacobs-Lorena, a professor at the Johns Hopkins Bloomberg School of Public Health. "We need something new to combat malaria."

But others worry the approach may be unsafe.

"Fighting malaria is something that everybody should do. But fighting malaria through genetic engineering is dangerous," says Nnimmo Bassey of the Health of Mother Earth Foundation, an advocacy group based in Nigeria. 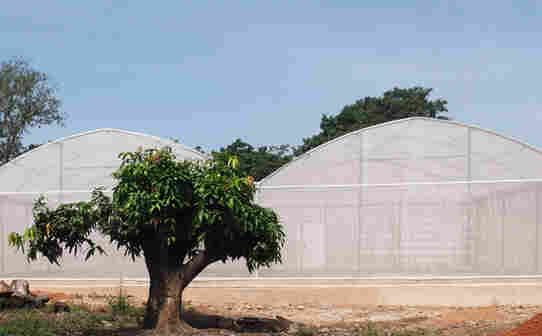 The scientists erected a "MosquitoSphere" in Burkina Faso to test the genetically modified fungus in something close to a natural setting. The structure resembles a large greenhouse, with walls made of mosquito netting. Inside are six compartments, including four designed to resemble typical huts in the region. Courtesy of Etienne Bilgo hide caption

Bassey worries the fungus would inadvertently kill other organisms, such as other insects, upsetting fragile ecosystems.

"I'm heavily worried that Africans are the preferred guinea pigs for experimentation, and Africa is going to become a large laboratory for risky experimentation," Bassey says. "We don't want this to happen."

St. Leger stressed that much more research is needed to further evaluate the fungus before anyone considers releasing the organisms in the wild.

"Nothing is going to happen without the acceptance of the local people who would be exposed to the fungus, its benefits and any potential risks," St. Leger says.

But based on laboratory experiments, the fungus seems harmless to other insects, such as bees, St. Leger says.

"From our scientific understanding, so far it's safe," he says.

"We put into the fungus this specific gene from a spider which produces a toxin. But it only makes it when the fungus is swimming in insect blood," St. Leger says.

Global efforts to control the disease appear to have stalled, in part because the mosquitoes that spread the parasite have become increasingly resistant to insecticides. So scientists have been struggling to find new ways to kill mosquitoes.

Some scientists are testing a controversial approach that involves using the powerful gene-editing tool CRISPR and sequence of DNA known as a "gene drive." Those researchers created mosquitoes that can quickly spread a sterilizing mutation to destroy mosquito populations.

St. Leger's approach involves Metarhizium pingshaense, a fungus that infects mosquitoes. The fungus can kill mosquitoes but not quickly.

"So that doesn't suit our purposes. We want the fungus to kill ... the mosquito quickly before it can transmit disease," St. Leger says.

The modified fungus appeared to be highly effective in laboratory tests. So the scientists decided to test the organisms in a setting that more closely resembled the natural environment in sub Saharan Africa. But they needed to keep the organisms contained until further safety testing could be conducted.

So the scientists built a "MosquitoSphere" in Burkina Faso. The structure resembles a large greenhouse. Instead of glass, the walls are made of mosquito netting. Inside are six compartments, including four designed to resemble typical huts.

The scientists spread sesame oil containing the fungus on black sheets inside the huts. Next, the researchers released into each hut about 1,500 Anopheles coluzzi mosquitoes, the species that spreads malaria in Burkina Faso. The idea was that the mosquitoes would pick up the fungi when they rested on the black sheets after feeding on live calves. Mosquitoes are attracted to black objects.

The populations of mosquitoes in the huts with the modified fungi crashed within about 45 days, the researchers reported.

"Within two generations, the mosquitoes were basically gone," St. Leger says. "They're finished."

"If it just reduced the transmission of malaria by 5% that would still be hundreds of thousands of lives that benefited. And we think it could do quite a bit better than that," he says.

Other scientists say the fungi could provide another weapon in the fight against malaria.

"These results are encouraging," says Tony Nolan, a senior lecturer at the Liverpool School of Tropical Medicine in Britain. Nolan is helping develop the CRISPR gene-drive mosquitoes.

"The temptation is to think of any one method as a silver bullet, and I don't think that's necessarily realistic," Nolan says. "I envisage both of them being in an armory of weapons."

"This study raises several urgent concerns," says Dana Perls of the Friends of the Earth, an environmental group, echoing the objections of the Health of Mother Earth Foundation. "Genetic engineering of fungus could have problematic negative public health impacts and unpredictable ripple effects on ecosystems, affecting pollinators, bats and bees. Like with all genetic engineering, this needs to be addressed with great caution."