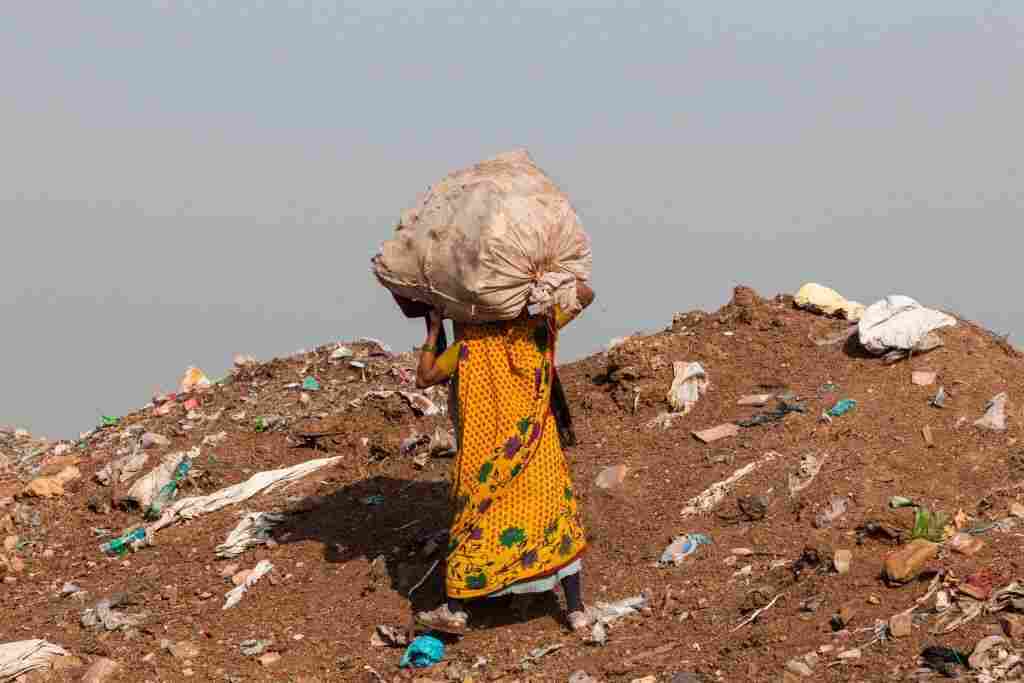 A trash picker carries a sack of recyclable materials she collected at the Ghazipur landfill in the east of New Delhi. Xavier Galiana/AFP/Getty Images hide caption 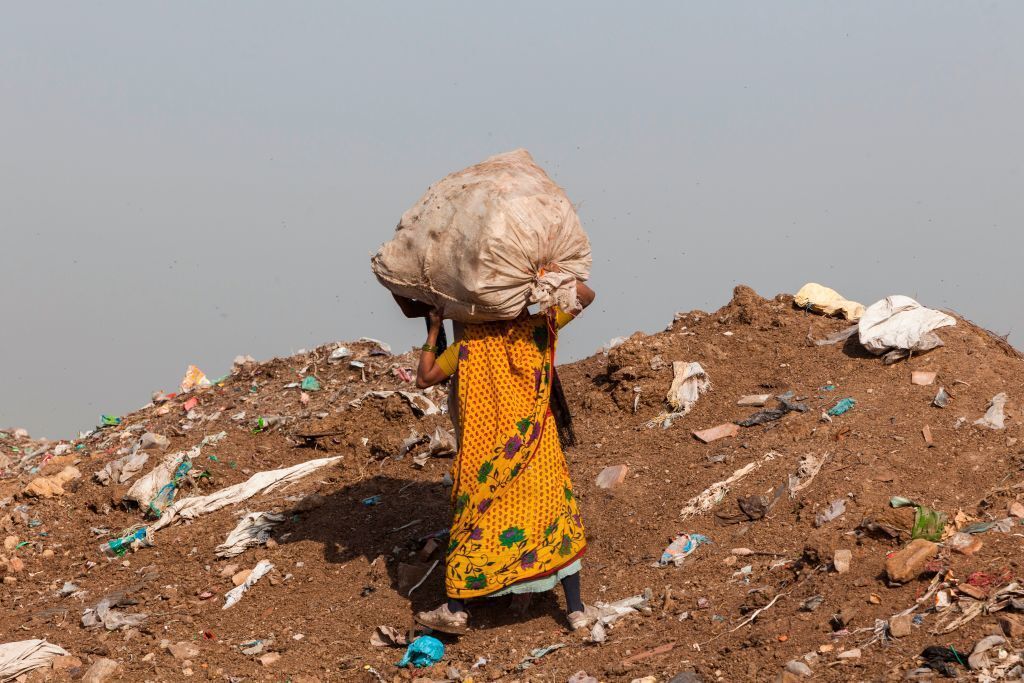 A trash picker carries a sack of recyclable materials she collected at the Ghazipur landfill in the east of New Delhi.

The first thing you notice, approaching the Ghazipur landfill, is a pack of emaciated feral dogs. Some of them are coughing.

That, and the stench — a putrid mix of rot, burning plastic and a dead animal somewhere close.

From afar, it looks like an arid plateau on the outskirts of India's capital. But this mountain isn't made of earth. It's made of trash. 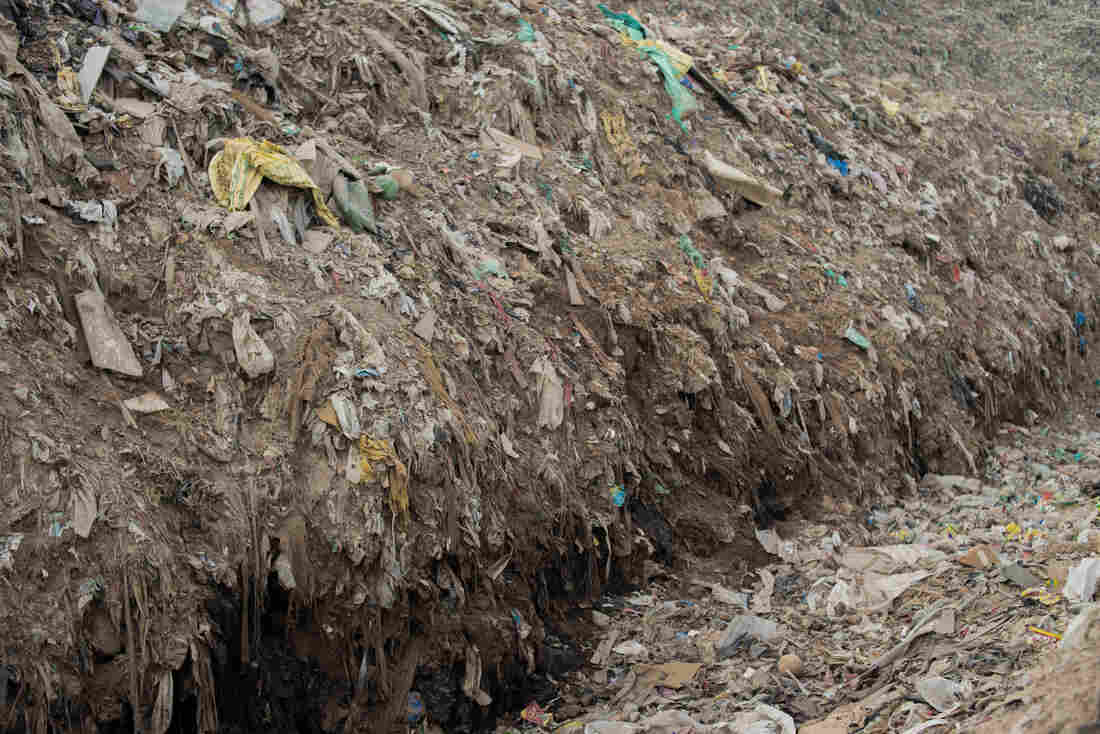 Trucks have bulldozed a switchback road up the Ghazipur landfill, which now towers almost as tall as the Taj Mahal. Furkan Latif Khan/NPR hide caption

It bakes in 100-degree summertime heat, emitting fumes and oozing toxins into the groundwater. At 20 stories high, and growing, it'll soon be taller than the Taj Mahal. (The Ghazipur mound is 213 feet; the Taj is 240 feet high.) Two years ago, a landslide of soggy garbage killed two local residents.

This is one big, smelly, dangerous example of how India is growing, getting richer — and generating more waste than it's able to handle. There are three other major landfills that ring the Indian capital, and hundreds more across the country. 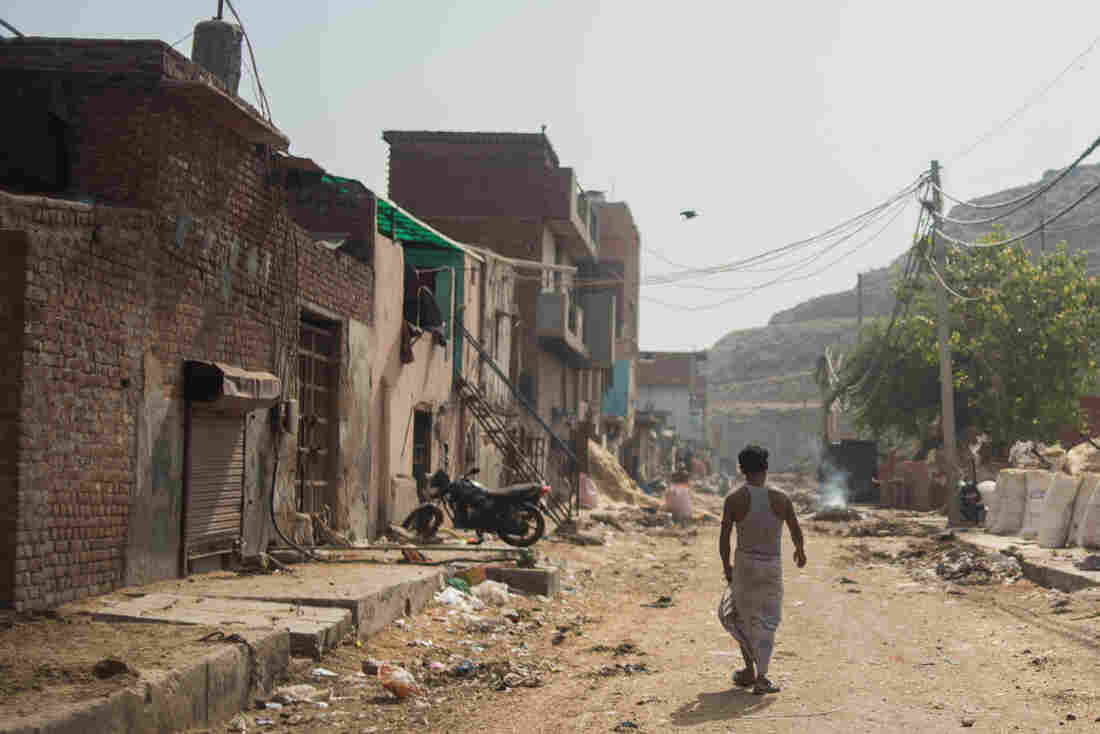 Sheikh Rahim, 36, walks from the slum where he lives, up to the Ghazipur landfill, where he scavenges plastic to sell to recyclers. Furkan Latif Khan/NPR hide caption

A slum of trash pickers has cropped up alongside the Ghazipur landfill, gleaning a living from it — or just barely. They scavenge plastic to sell to recycling plants.

"This work is easier in winter," says Sheikh Rahim, 36, a wiry, compact man with one gold hoop earring. "But I like it all right. I'm used it, and anyway, I don't have a choice."

Rahim never went to school. He moved here 19 years ago from the city that was then called Calcutta. He married a local woman, and they have four children. The family lives in a slum sandwiched between the landfill and a modern new metro station.

Every day at noon, Rahim climbs the trash mountain — in sandals. He prefers to go at the hottest time of day, when there's less competition. Sometimes his 8-year-old daughter Chandini comes with him. 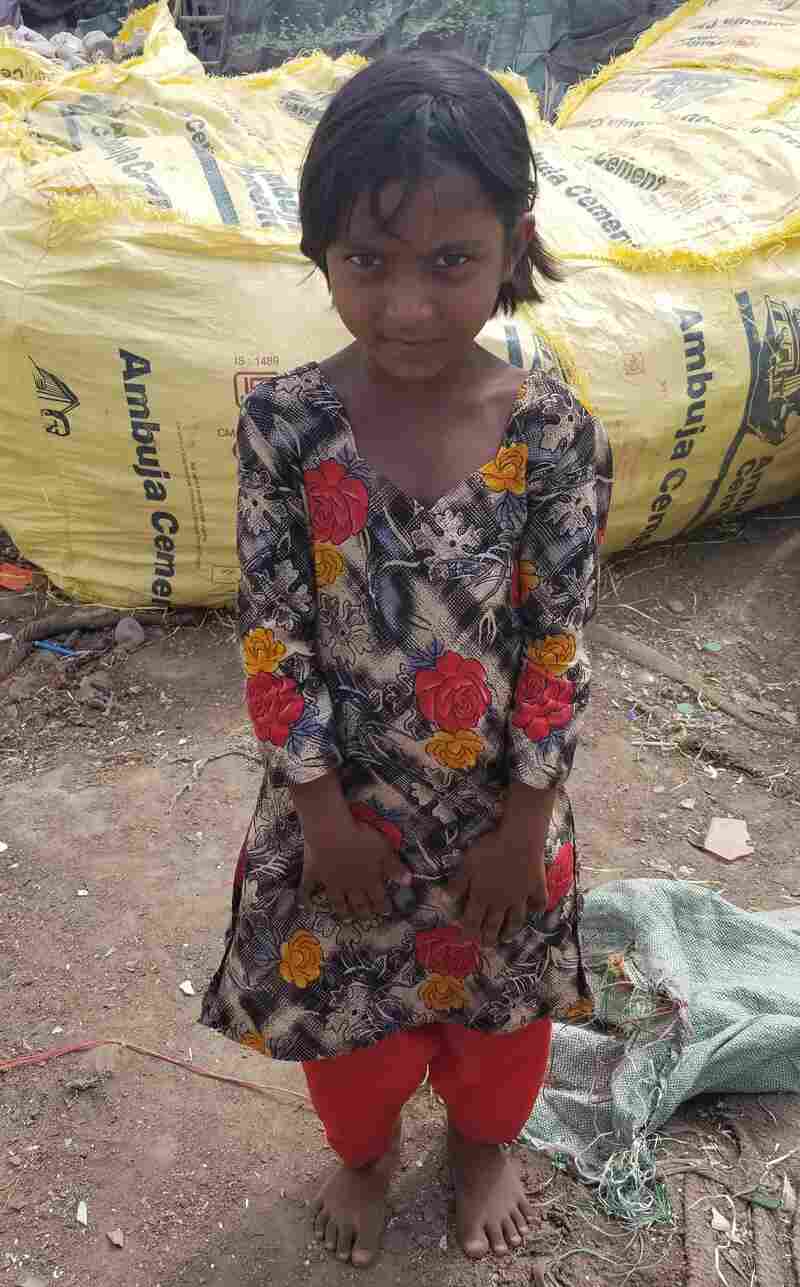 Sheikh Rahim's 8-year-old daughter sometimes joins him on his hunt for recyclables at the Ghazipur landfill. Lauren Frayer/NPR hide caption

There's a switchback road, as wide as a highway, which dump trucks have bulldozed, zigzagging back and forth up the mountain. But Rahim can't use that. Foot traffic is forbidden.

He has to go the back way.

First he shimmies under coils of barbed wire, which police put up around the perimeter of the mountain two years ago, after the landslide deaths, to keep people like Rahim out. Then he fords a fetid creek that circles around part of the trash heap like a moat. Previously, he'd dropped cement slabs into the water as stepping stones. He gingerly checks to see if they'll still hold his weight. He doesn't want to fall into this inky water, he says.

Rahim says his hands get cut, and his back gets scraped by the barbed wire. He gets shots regularly, to ward off infection.

Atop the mountain, Rahim uses a rod to rifle through the mound. The garbage is mostly gray and decaying, bleached by the sun. Vultures circle above him and dive, plucking bits of plastic in their beaks.

Before dusk, Rahim descends with a sack full of recyclables. In an open lot between his slum and the mountain, he and his neighbors sort opaque plastic from clear plastic, and aluminum foil from paper. They pack the segregated trash into giant yellow bags discarded from a cement factory. 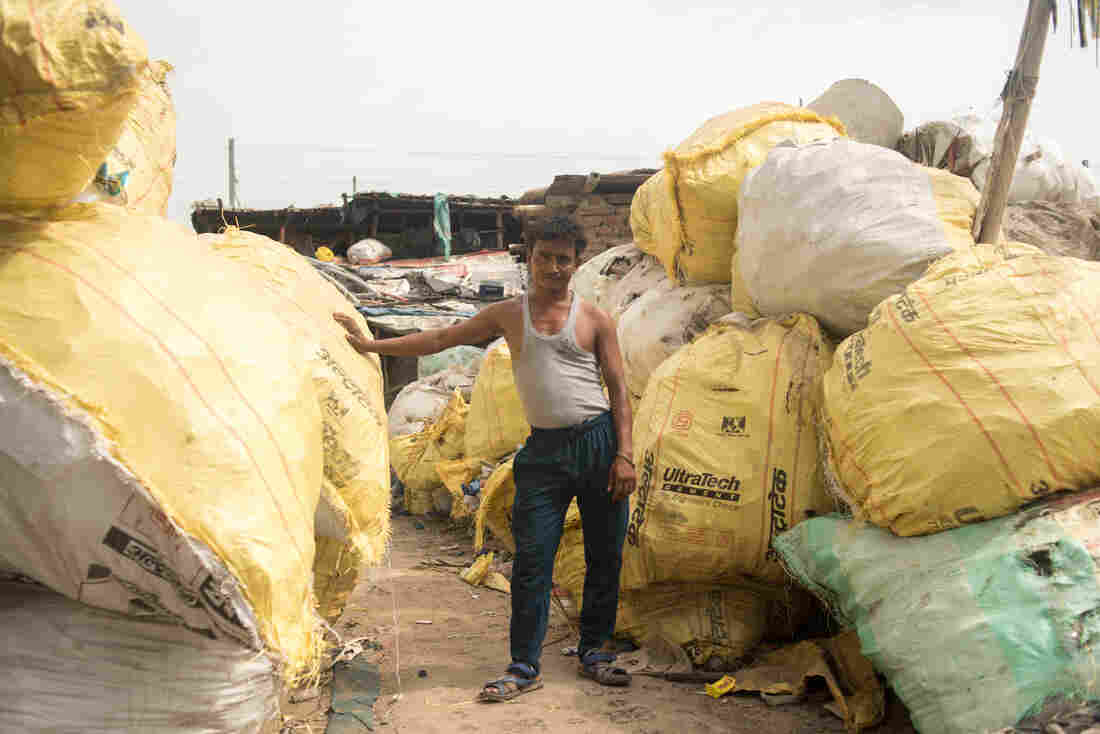 Sheikh Rahim scavenges plastic on Ghazipur landfill for about 5 hours a day, then sorts it and puts it in huge bags. Furkan Latif Khan/NPR hide caption

Most of India's recycling happens like this. Even if you sort your trash at home, municipal garbage collectors — if they even service your neighborhood — often toss it into the truck all together. It gets sorted again at a landfill — not by the municipality but by the poorest of the poor.

Rahim picks through rotten trash for about five hours a day, then sorts and sells a day's haul for 150 rupees, about $2 dollars — to middlemen like Mohammed Asif.

Asif, 22, is one step up in the garbage chain. He doesn't collect trash himself. He's got an army of local boys picking up recyclables for him.

They deliver it to Asif's workshop, which directly faces the trash mountain, separated from it by yet another creek of raw sewage, buzzing with mosquitoes. Asif weighs bags bursting with empty bottles, and sells them to truckers bound for recycling plants. He licks his fingers and peels bills off a fat wad of currency, then tucks it back into his pocket.

"I'm a businessman. I do this for money," Asif says with a swagger. But then he turns somber. "If I don't, our streets will fill with trash. We won't be able to handle it. It already stinks. Our eyes burn. In summer, this trash mountain spontaneously catches fire."

The fires are likely sparked by the release of methane and other gases as trash and organic materials break down.

A local doctor, Kumud Gupta, told a local newspaper she sees about 70 people a day, including babies, who are suffering from respiratory and stomach ailments linked to pollution from the landfill.

Across India, there are many thousands of people like Rahim and Asif, toiling in extreme conditions like this, on garbage heaps that are only growing taller.