Accessibility links
Study: Why Cavities Are On The Rise Around The World : Goats and Soda The authors of a new study say dental health is especially bad in low- and middle-income countries — and that Big Sugar works to make sure soda and candy aren't targeted as cavity culprits. 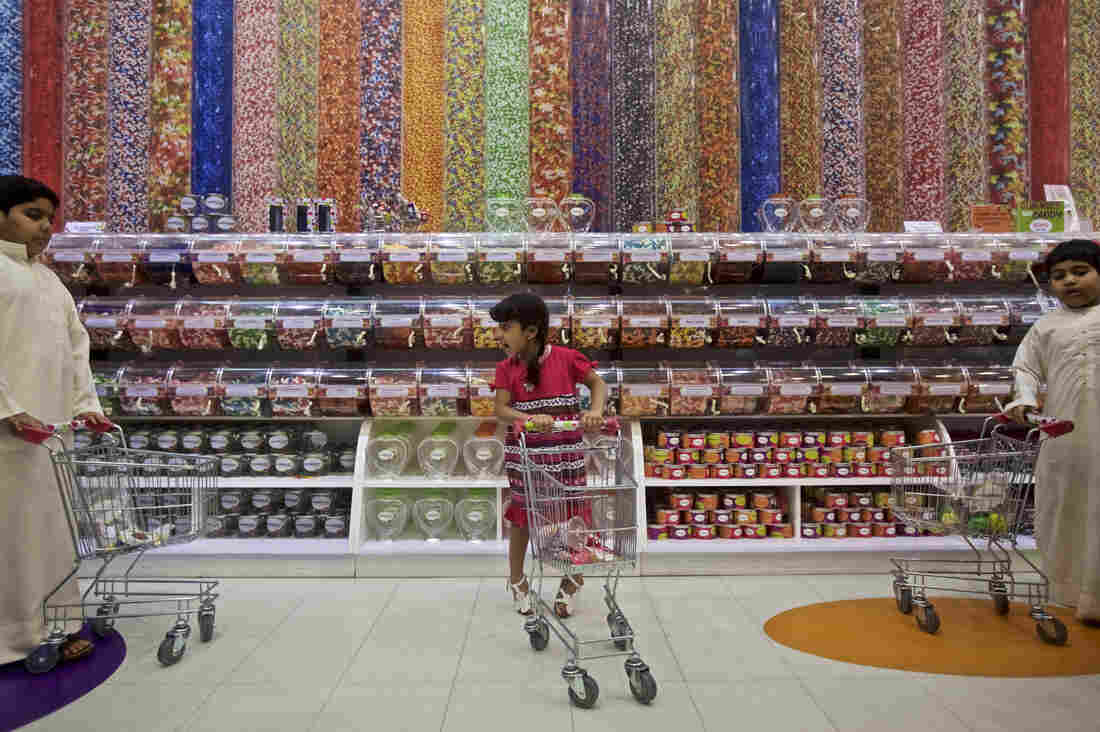 The Candylicious store in the Dubai Mall in the United Arab Emirates. John Stanmeyer for NPR hide caption 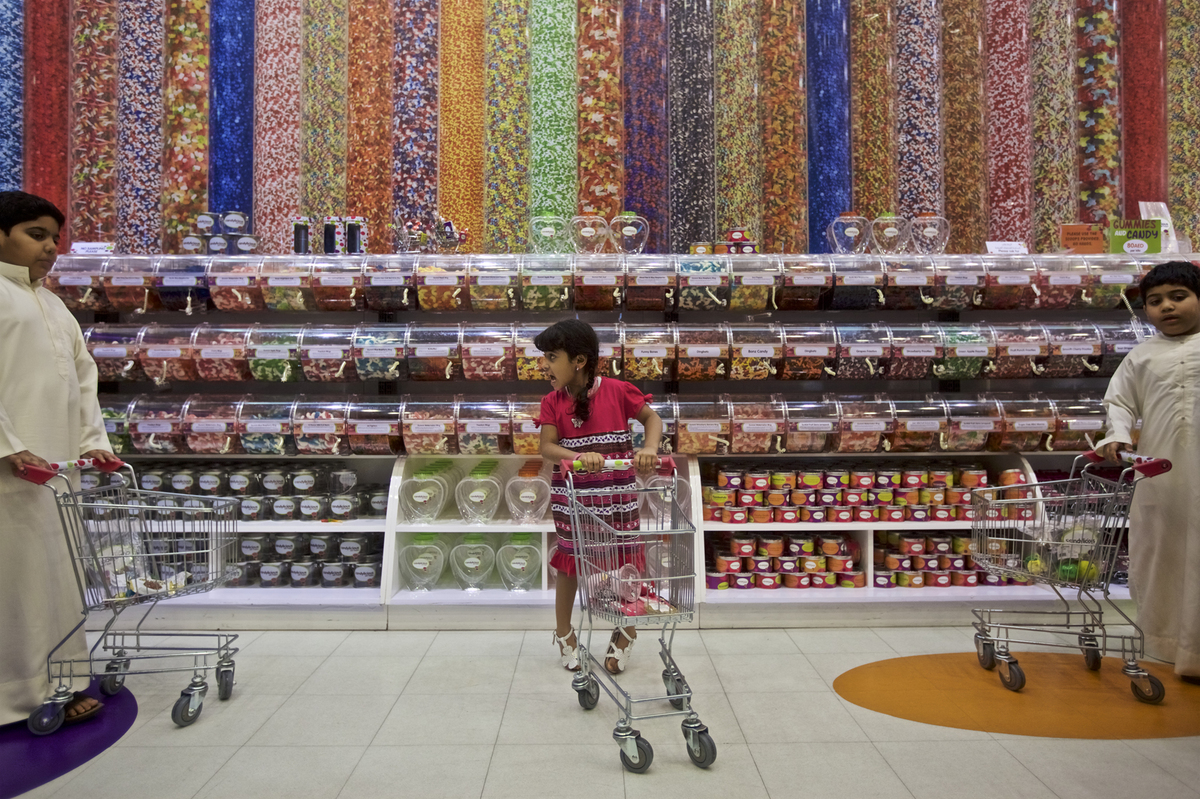 The Candylicious store in the Dubai Mall in the United Arab Emirates.

About 95% of 12-year-olds in the Philippines have tooth decay or cavities. And cavities affect 7 in 10 children in India, one-third of Tanzania teens and nearly 1 in every 3 Brazilians.

These and other startling oral health statistics are the focus of a two-part series published this week in The Lancet. In it, more than a dozen dentists and public health experts call for radical action to end neglected and widespread oral disease.

"Sugar is the causative agent for dental decay," says Robert Weyant, one of the study authors and a dental public health expert at the University of Pittsburgh. "Basically, without sugar, you won't develop decay." 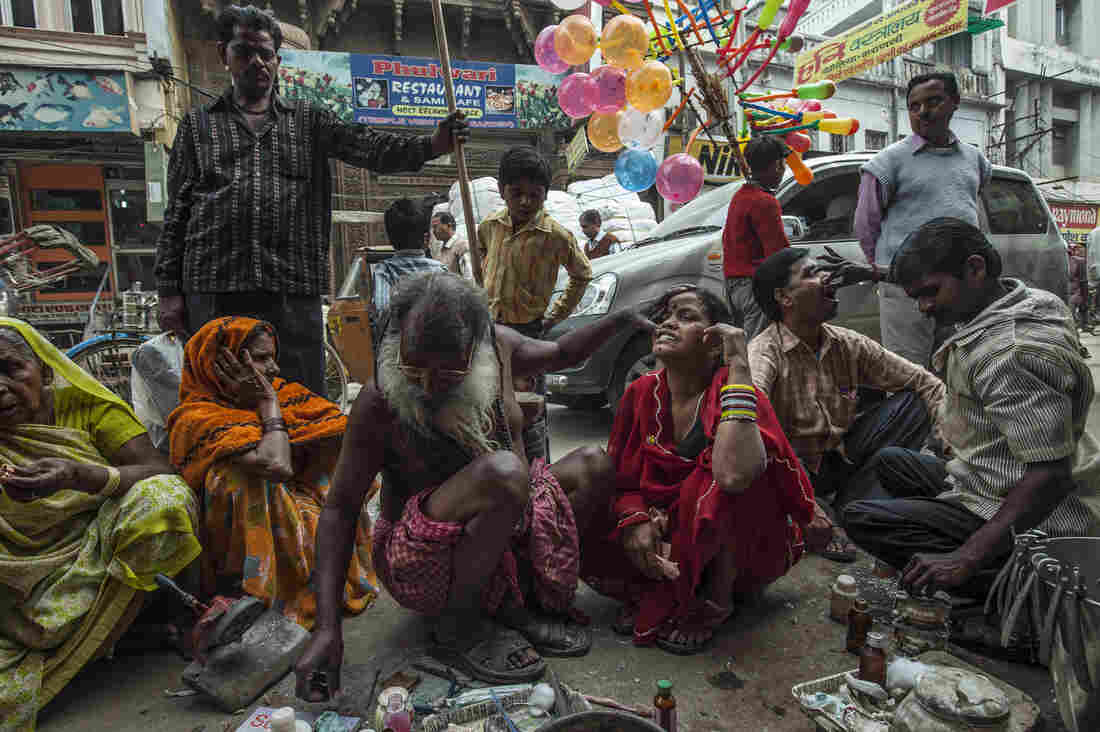 Roadside dentist Ram Ji learned his trade from his father — and says he's trained 29 street dentists in Varanasi, India. He believes that sweets are the main cause of the tooth decay he treats. John Stanmeyer for NPR hide caption 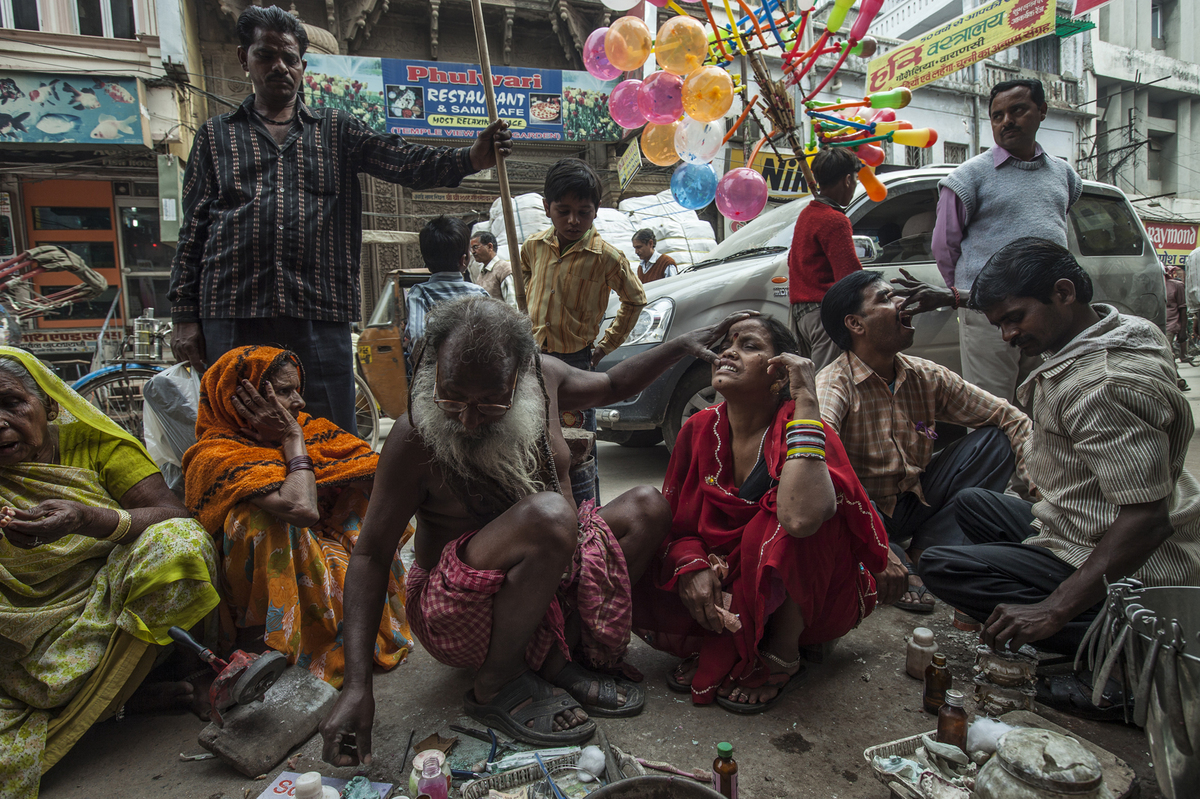 Roadside dentist Ram Ji learned his trade from his father — and says he's trained 29 street dentists in Varanasi, India. He believes that sweets are the main cause of the tooth decay he treats.

The Lancet study authors also point at what they call a failed dental system, where many dentists prioritize treatment over prevention efforts — like toothbrushing with fluoride and restricting sugar intake. Coupled with an overwhelming number of sweetened food and beverage options, cavities are on the rise, especially in low- and middle-income countries.

That's because residents in those places are undergoing a global phenomenon known as a "nutrition transition," says Habib Benzian, a study co-author and associate director of global health and policy at New York University's College of Dentistry.

Benzian explains, "It's a part of convenience. If you work all day and come home, you want quick food. Fast foods that are fried, high in fat, sweet — and very cheap."

The sugar industry has been quick to jump on the trend. Weyant says, "I do see effort [by the sugar industry] to break into new areas and foster an interest in high sugar foods in particularly vulnerable populations."

According to Marion Nestle, author of the book Soda Politics: Taking on Big Soda (and Winning), by 2020, Coca-Cola will spend $12 billion in marketing in Africa alone. PepsiCo will spend $5.5 billion in India by 2020 to expand operations and develop products "geared toward Indian tastes." 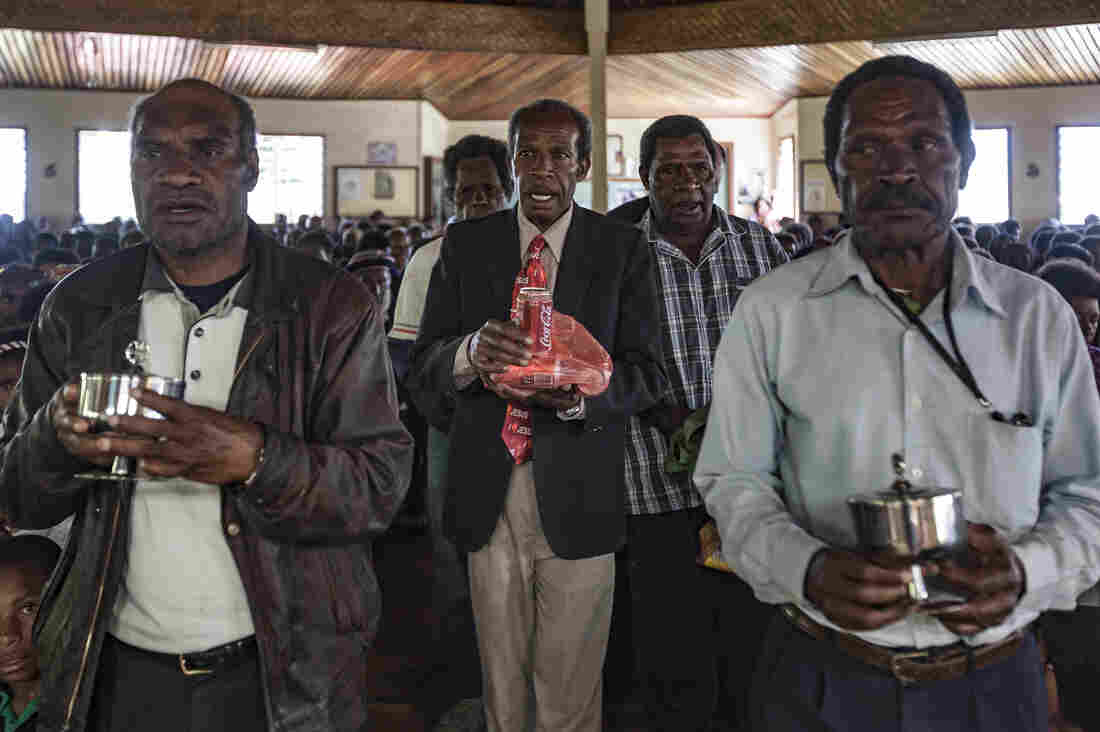 Coca-Cola is part of a spiritual offering, replacing sugar cane, at the Sunday service at Sagurap Catholic Church in the village of Wabag, in Papua New Guinea's Enga Province. John Stanmeyer for NPR hide caption

Big Sugar's marketing campaigns aren't the only problem, the study says. According to the researchers, the industry currently influences oral research organizations worldwide.

For example, the European Organisation for Caries Research (ORCA) is supported by corporate members such as Mars Wrigley Confectionery, a manufacturer of chocolate, mints, chewing gum and other sugary treats. Unilever, whose products include ice cream and sweetened beverages, is a corporate member of the International Association for Dental Research (IADR).

These conflicts of interest can potentially sway the direction and results of diet and nutrition research, says sugar politics expert Cristin Kearns, who wrote a commentary about the new Lancet series and is based at the University of California, San Francisco.

Kearns has seen this happen before.

In a 2015 PLOS Medicine study, Kearns revealed how the sugar industry influenced the U.S. National Institute of Dental Research in the 1960s, diverting attention from the real problem at hand — that sugar is unhealthy.

"I uncovered documents showing how the industry cultivated partnerships with leaders and influenced the research priorities of the NIDR," Kearns says. "The NIDR's research priorities ended up focusing on nondietary programs, like trying to develop a vaccine to end tooth decay ... or any method but addressing sugar consumption levels."

In response to Kearns' 2015 study, the Sugar Association said to Buzzfeed News, "We acknowledge that Dr. Kearns has devoted significant time to the task of reviewing thousands of documents from over 50 years ago; however, we question her motives and certainly the accuracy of her conclusions. The Sugar Association ... believe[s] that sugar is best enjoyed in moderation, a fact that is supported by decades of scientific research." 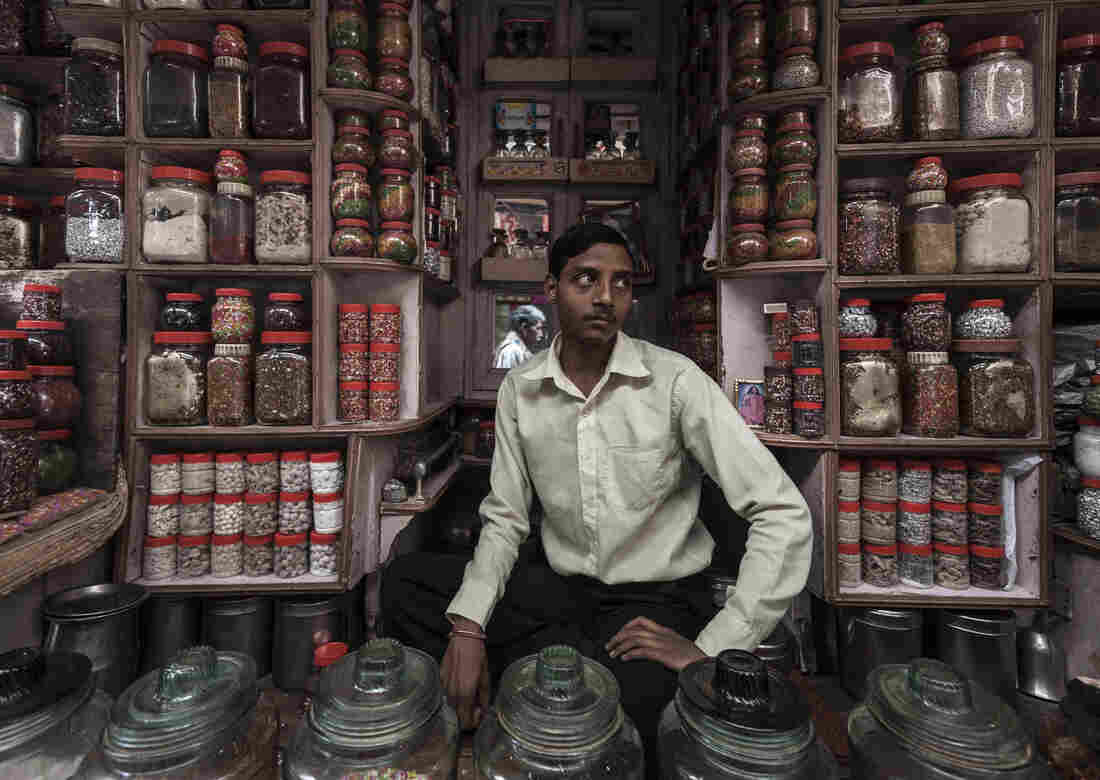 Up against Big Sugar, what can dentists around the world do?

"The real recommendation is to take a hard look at relationships in these [oral health research] organizations and how the sugar industry might be influencing these relationships," Kearns says. "These organizations need to be sure that policies are in place to stop undue influence."

Weyant believes that it's time for state and national governments to step in.

He points to the tobacco industry and how there is now a global tobacco control agenda through the World Health Organization. The treaty was established in 2003 in response to a global surge in tobacco usage. The WHO treaty demanded reduction strategies, like tobacco tax increases, to dissuade people from using the addictive substance.

"However, there is no united global movement against sugar," Weyant says. "I think that model needs to be adapted for sugar."

Benzian points to the need for more focused oral hygiene efforts. For example, to combat cavity rates in the Philippines, in 2009 the country established the Fit for School program.

"They are bringing education directly to the schools," Benzian says. "It's a mandatory program where every day, all the children go out into the courtyards to brush their teeth and wash their hands."

Nadia Whitehead is a freelance journalist and science writer. Her work has appeared in Science, The Washington Post and NPR. Find her on Twitter @NadiaMacias