Accessibility links
Venezuela's Sweetheart Oil Deal Has A Legacy Of Debt And Corruption Charges : Goats and Soda The PetroCaribe program provided fuel to Venezuela's neighbors on long-term credit to spur economic growth. What has happened now that Venezuela is in free fall? 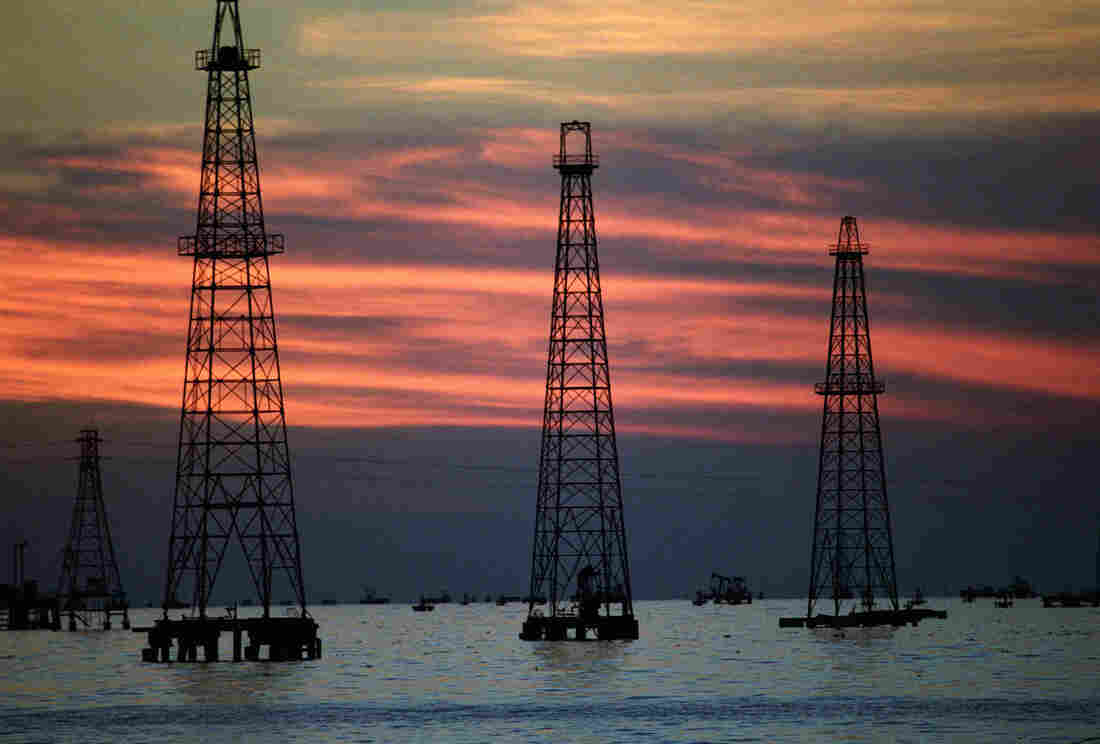 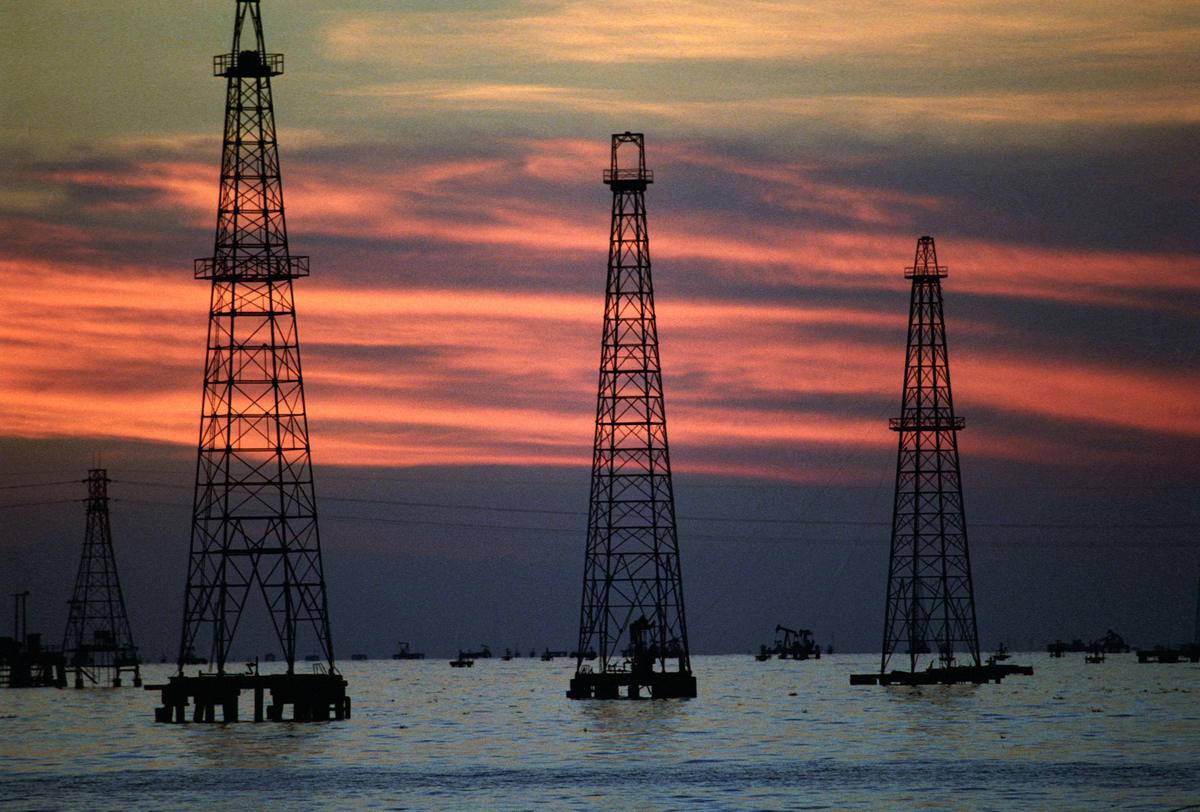 Oil production platforms on Venezuela's Lake Maracaibo. Venezuela sits on some of the largest oil reserves in the world.

It sounded like such a good idea at the time.

The year was 2005. Global oil prices were climbing dramatically. Countries in the Caribbean were facing major fuel shortages. Venezuela, one of the world's largest producers of crude, offered to ease the staggering fuel costs faced by its neighbors.

And that's why Hugo Chavez launched PetroCaribe. He billed it as an "energy alliance" that would spur economic growth and development in the region. The program sent oil to countries in the Caribbean and Central America on extremely generous terms. The PetroCaribe countries essentially only had to pay for half of the fuel up front. Venezuela financed the remainder of the fuel bill at as little as a 1% interest rate for the next 25 years. To sweeten the deal even more Venezuela granted a 24-month grace period before any of those financed payments came due.

As oil prices were careening toward $100 a barrel this was incredibly good news for many of these countries. Higher oil costs were driving up prices at the gas pump, causing electricity outages and squeezing their entire economies.

On the surface it looked as if Chavez was offering discounted fuel to his neighbors. But that wasn't the case. The countries were purchasing the oil at the market rate, which was going through the roof. So PetroCaribe only eased the shock of rapidly rising gas prices by allowing countries to pay for the fuel over the next 25 years. But those countries were still on the hook for those $100 barrels of crude. Oil is now trading for roughly $60 a barrel.

"The fuel itself was never discounted. This was a public finance program," Goldwyn says. In his estimation, what the PetroCaribe countries "got was a loan from Venezuela to buy that fuel over a very long term at a very low rate."

Since the inception of PetroCaribe in 2005, 17 countries took part. They included the Dominican Republic, Jamaica, Nicaragua and the tiny island nation of Saint Kitts and Nevis, with a population of just 50,000 people.

President Chavez claimed the program would free up government funds for schools, roads and other public infrastructure. His idea was that the money the nations saved by not paying full price up front would be parked in a local PetroCaribe development fund and could be used to finance social programs.

Jamaica stashed billions of dollars in fuel savings into a trust that handled the fuel debt payments to Caracas and offered discounted loans for local development projects. The Dominican Republic used PetroCaribe funds to offer subsidized electricity. But with little oversight and oil prices skyrocketing, some other countries used the long-term loans simply to keep gas prices low at the pump.

Critics say PetroCaribe suppressed the development of renewable energy, burdened these small nations with billions of dollars in debt – and spurred corruption.

Haiti set up a PetroCaribe development fund but legislators now say that $1.7 billion went missing between 2008 and 2016. Questions about corruption in the program led to violent protests this year in Port au Prince and calls for Haiti's president Jovenel Moïse to resign.

Even with the collapse of Venezuela's economy, including its oil industry, the government claims that PetroCaribe continues in force as a regional energy alliance.

But others say the program is basically out of business.

"Today the only country that's receiving crude oil from Venezuela at this type of preferential treatment is Cuba," says Jorge Piñon, director of the Latin America and Caribbean Energy Program at the University of Texas, Austin.

"We know for a fact that none of the Caribbean islands and none of the Central American countries that have been members of PetroCaribe are receiving crude."

There are a several reasons for this. First, Venezuela oil industry is in turmoil. Venezuela's oil rigs, which had been producing nearly 3 million barrels of crude a day in 2014, are now producing just a fraction of that.

"The country with the largest (proven) crude oil reserves in the world is producing today less than a million barrels a day," Piñon says. "So that's really the biggest challenge for Venezuela. They can no longer provide cheap barrels to a lot of these countries."

Much of the oil that they are extracting is now going straight on to tankers bound for Russia or China to pay off Venezuela's debts to those countries.

In addition to the economic collapse of Venezuela, U.S. sanctions against the country are making it almost impossible to route bank payments to Caracas. So even PetroCaribe countries that are trying to make payments on their oil debt to Venezuela or arrange shipments of more oil at market rates can't find banks willing to transfer the money. Now that the fuel shipments under PetroCaribe have come to a halt, the lasting legacy of the program is a net negative: many regional governments still owe billions of dollars to Venezuela but can't even logistically pay because of U.S. sanctions on Venezuelan banks. Piñon says Cuba is still getting some oil through Petrocaribe and doesn't have the debt problems because it brokered a deal to pay for its oil by sending doctors to Venezuela.

One country did a good job handling the payments. In 2015 the Dominican Republic took advantage of the chaos in Caracas to pay off 4 billion dollars in PetroCaribe debt at a steep discount, by giving Venezuela $1.9 billion in cash.

But some of the other PetroCaribe nations still owe Venezuela huge sums of money. David Goldwyn, the international energy consultant, says the relatively cheap access to oil under PetroCaribe left many Caribbean island nations tied to aging, inefficient power plants. And the debt from the program now makes it hard for those countries to finance new, cleaner energy infrastructure — for instance, for solar or natural gas.

"They're not only highly indebted, they're considered middle income (by international development agencies) because of their small populations," Goldwyn says. "So now they are really squeezed in terms of the ability to access capital markets to do development. From a fiscal perspective they've done themselves in many cases some very significant harm."

From a short-term perspective PetroCaribe eased the shock of wildly fluctuating oil prices for Venezuela's neighbors. For president Hugo Chavez it won him political friends and allies in the region whose support was particularly helpful to Chavez in getting resolutions passed at the Organization of American States. But Chavez passed away in 2013. PetroCaribe oil shipments started to sputter soon after as Venezuela's economic collapse deepened.

And after years of offering this "cheap" fuel throughout the region, now Venezuela is suffering from major gas shortages at its own pumps.

"Right now there is no gas in the country," says Jose Toro Hardy, an economist in Caracas and a former board member of the Venezuelan state oil company. "In Caracas still there is some gas but if you go to any other state in Venezuela, [there are] lines for two, three, four hours and sometimes days to get some gas. It's amazing."