Accessibility links
India's #MeToo Movement, One Year On : Goats and Soda Nearly a year after the movement exploded across the country, some activists worry that the fight against sexual harassment has stalled.

India's #MeToo Movement, One Year On

India's #MeToo Movement, One Year On 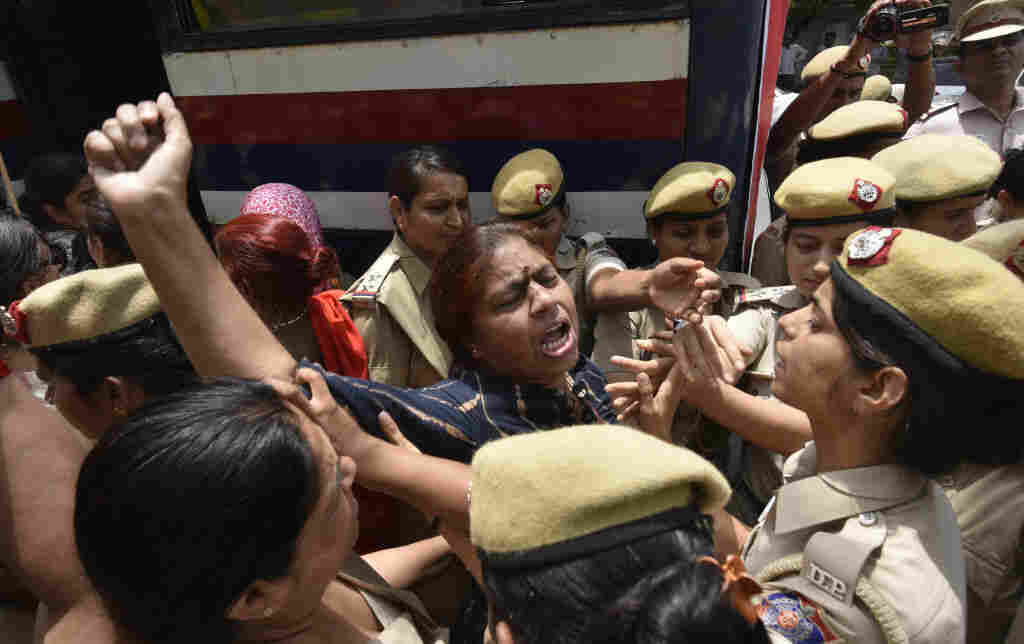 Police detain women during a protest in front of the Supreme Court building in New Delhi in May. The demonstration was in response to Chief Justice Ranjan Gogoi's exoneration in a sexual harassment case. Vipin Kumar/Hindustan Times via Getty Images hide caption 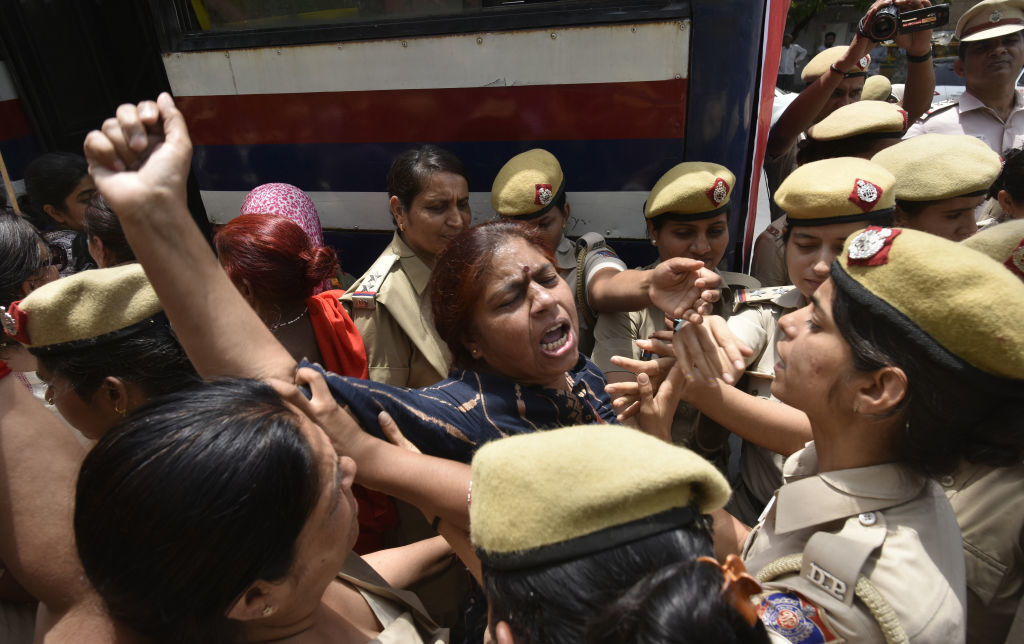 Police detain women during a protest in front of the Supreme Court building in New Delhi in May. The demonstration was in response to Chief Justice Ranjan Gogoi's exoneration in a sexual harassment case.

The #MeToo movement gained momentum in India last fall when scores of women came out with stories of sexual harassment. They exposed their alleged abusers by posting screenshots on social media of inappropriate messages. It was an outpouring like conservative, patriarchal India had never seen. Several high-profile men — including a government minister, the head of a popular comedy troupe and an auto industry executive — were pressured to step down from their positions.

But nearly one year after the movement exploded across India, some activists are frustrated. The accuser in one case has been put on trial herself, for defamation. A big Indian publishing house gave a book deal to an alleged harasser (who denied the allegations). And when a woman came forward with sexual harassment allegations against the chief justice of India's Supreme Court — the highest-ranking alleged offender to date — the judge himself decided who would investigate. (India's sexual harassment law doesn't specify how allegations against the chief justice should be investigated.) He was later exonerated.

"The state and the institutions meant to protect women have failed them," says Rituparna Chatterjee, a women's rights activist who created the popular @IndiaMeToo Twitter account in October to chronicle the movement.

On June 13, police announced they had closed the very case that's credited with first launching India's #MeToo movement last fall — without pressing any charges. Bollywood actress Tanushree Dutta had alleged that veteran actor Nana Patekar, now 68, touched her inappropriately on a movie set 10 years ago. She filed a complaint in October, and the case was widely publicized. Patekar denied any wrongdoing, and police ultimately dismissed the case citing lack of evidence.

"I'm tired of fighting alone against oppressors, bullies and a corrupt system," Dutta wrote in a statement sent to journalists on WhatsApp in June. Neither Patekar nor law enforcement spokespeople have responded.

At the same time that #MeToo activists are feeling discouraged, men's rights groups are becoming more vocal. For decades, co-ed groups have lobbied to protect men from false convictions in rape and dowry cases. (Dowries are payments made by a bride's family. It's now illegal for a groom to ask for a dowry, but the practice is still widespread.) The #MeToo movement has given men's rights activists something else to rally against.

Barkha Trehan, the female head of a group, Purush Aayog — which means "Men's Commission" in Hindi — calls the #MeToo movement's use of social media "digital lynching." She says powerful Indian men have been unfairly maligned. Her group wants the Indian government to create a men's ministry or special commission and has called for the accuser in the chief justice case to be punished.

Trehan also objects to the very title of India's main sexual harassment law, called Sexual Harassment of Women at Workplace Act, which assumes that victims are female. The law makes no mention of male or transgender victims.

"We have to make them gender-neutral. Why don't we have laws for men?" Trehan asks. "This is utter discrimination against men and boys."

Meanwhile, some accused men have retaliated with lawsuits.

Last October, when journalist Priya Ramani and more than 10 other women, including NPR editor Pallavi Gogoi, accused a former newspaper editor and government minister, M.J. Akbar, of sexual harassment, he quit his job. But days later, he filed a criminal defamation lawsuit against Ramani. She is currently on trial and faces up to two years in jail, and/or a fine if convicted.

"We are living in a dystopian world, where the woman who speaks up is being sued," Chatterjee says.

Trehan calls the allegations against Akbar a conspiracy to bring him down.

One of the biggest disappointments for #MeToo activists has been how India's legal establishment handled a sexual harassment complaint against the country's top judge.

In April, a former staffer at the Supreme Court of India accused the country's chief justice, Ranjan Gogoi, of hugging her around the waist and touching her inappropriately. After she rebuffed him, she claims that he retaliated by firing her, and also getting two of her relatives fired from their government jobs. (The relatives have since been reinstated.) The woman says the sexual harassment took place in October.

(Her name is not being published in the media, in accordance with Indian law, to protect the identity of those who claim to have experienced sexual violence.)

Gogoi denies it, and in late April presided over a special court session about the allegations against himself. The complainant was not a part of the session. In May, an investigation conducted by three of his colleagues cleared him of any wrongdoing. The investigators said that they "found no substance" in the allegations but did not make their report public.

"With its opaque handling of the sexual harassment case against the Chief Justice of India, the Supreme Court and its senior judges have not only failed the victim but also the larger public," wrote Urvashi Butalia, a feminist writer and publisher, in an op-ed in The Hindu Business Line in March.

Hours after Gogoi was exonerated, protests broke out in front of the Supreme Court building in New Delhi. In the days following, demonstrations spread to several other Indian cities. Lawyers mailed copies of India's sexual harassment law to Supreme Court judges, as a mark of protest. Lawyers, former judges and activists criticized the way in which the inquiry was conducted, alleging the investigators — all fellow Supreme Court justices — were necessarily biased in favor of the chief justice.

But the women behind India's #MeToo say they're not giving up — and that they're proud of what they've accomplished. In less than a year, the movement has managed to expose sexual harassment that was formerly a taboo to discuss, and create awareness that the activists hope will lead to permanent legal changes.

"[The #MeToo movement] showed us that a very broad range of sexual violence was taking place and that it was not just a few bad men out there," says human rights activist and lawyer Vrinda Grover. "It showed everyone — very clearly — that this was almost like an invisible, daily occurrence which was completely pervasive."

Grover, who represented the chief justice's accuser, says the #MeToo movement is exposing limitations in the law. "[Cases of sexual harassment] cannot be understood in the routine, standard terms in which other forms of violence are understood," she says. She wants Indian law to be modified to ensure fair treatment of alleged victims of sexual harassment.

Under India's sexual harassment law, every organization with more than 10 employees is required to have an internal complaints committee for sexual harassment cases. But the committee is nominated by the employer, and Grover says that's counterproductive.

"There is an assumption that the employer is a good person and will constitute a committee that will be gender sensitive and just and will not have its own prejudices," she says. Grover suggests organizations elect the committee members instead, or come up with another method to form the committee.

Activists also have concerns about statutes of limitations for sexual harassment complaints. Current law requires victims reporting workplace violations to come forward to those committees within three months, or appeal for an extension of an additional three months. Statutes of limitations are longer for reporting sexual violence to police, and there is no time limit on reporting rape.

Beyond legal reforms, Chatterjee, who runs @IndiaMeToo on Twitter, wants to see a change in attitudes toward sexual harassment cases through "more ground mobilization, addressing workplace harassment in a sustained way and most importantly, awareness and education in Indian schools."

But despite the pitfalls in the movement, Chatterjee is hopeful and says, "Indian women have found the courage to speak up against the most powerful."