Accessibility links
India's Sewer Cleaners: Can Their 'Denigrating' Job Be Taken Over By Robots? : Goats and Soda Cleaning sewers by hand is a profession in India that has been banned but still persists. Mechanical devices, including robots, are emerging as a possible solution.

A Robot Might Take His Job — And That's Good News

A Robot Might Take His Job — And That's Good News 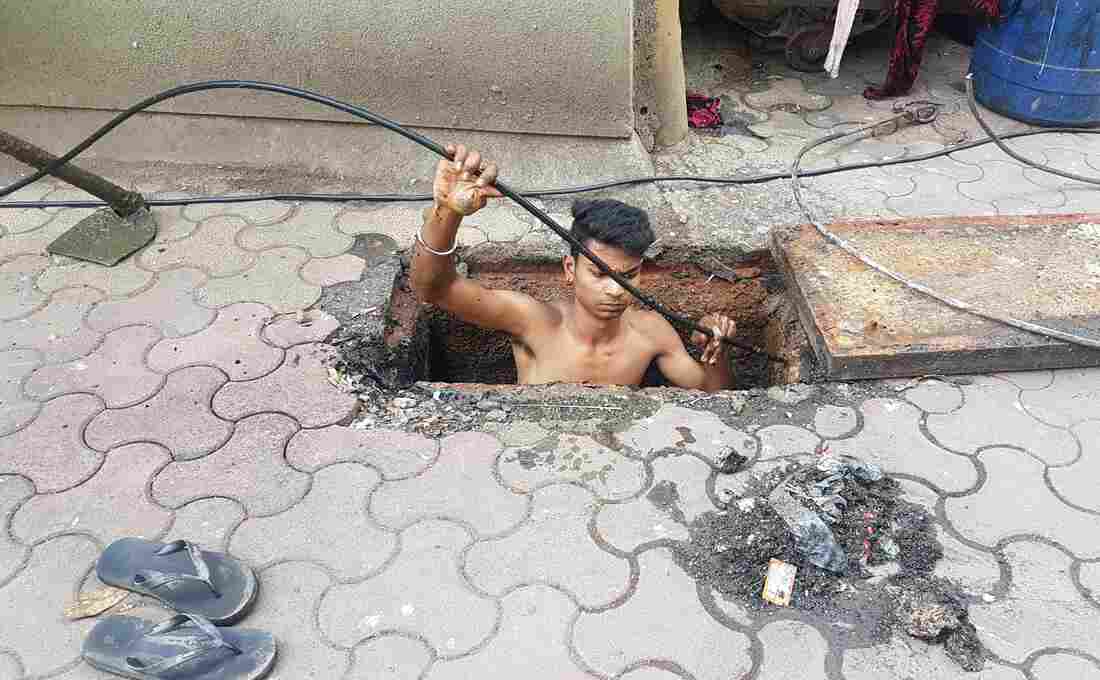 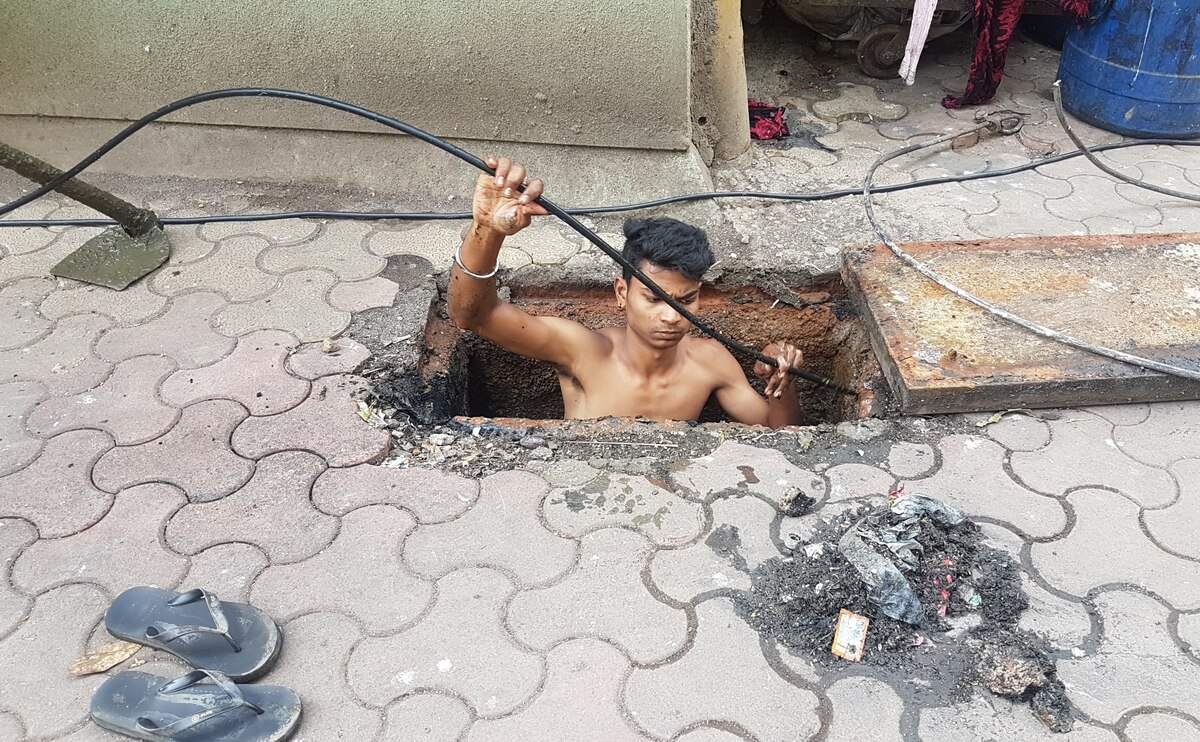 Jitesh Singolia is standing in a manhole. He is up to his waist in gray sewage – a mixture of waste from toilets and kitchens — as he tries to unclog the sewer pipe in a housing complex in the northern suburbs of Mumbai. He scoops out sludge with his bare hands. It contains human excrement, soiled sanitary pads, even razor blades, which sometimes cut him.

He says he usually bathes at least twice at the end of a day's work to wash off the stench.

"I don't feel like doing this," says the 19-year-old. "But I have to." Poor and uneducated, he's been doing this job since he was 7 years old.

Singolia is one of nearly 200,000 Indians — most of them belonging to lower castes — employed in sanitation work. The government calls them "manual scavengers" — people who clean latrines and sewers. In India, only a third of all urban households are connected to a piped sewer system. About 80 percent of sewage from Indian cities goes untreated.

There have been official efforts to bring an end to the profession for decades. The most recent: In 2014, India's Supreme Court ordered the abolishment of manual scavenging, calling it a "denigrating task."

The job is not only "denigrating," as the court noted. It's dangerous. Medical researchers have found that workers are exposed to harmful gases like methane and ammonia and are also at risk for bacterial infections. According to the Indian government, about 600 sewer workers have died in sewers across the country since 1993. Some fall into deep sewer holes when ropes supporting them snap. Many of the victims are asphyxiated by noxious gases. After 11 manual scavengers died in a single week last September, protesters gathered in New Delhi, chanting and holding banners: "Stop killing us."

The official edicts have so far not been effective. "Till today, to the people who are cleaning, in their life, there is no change," says Bezwada Wilson, national convener of the Safai Karamchari Andolan ("Sanitation Workers' Movement" in Hindi), a Delhi-based organization that advocates against manual scavenging.

But technology might finally bring an end to the job – with solutions that include a robot cleaner named after a common sewer rat.

The government also thinks technology could be the answer. In early July, when Indian Finance Minister Nirmala Sitharaman unveiled her new budget, she announced the extension of a government plan in which banks facilitate loans to women and people from marginalized communities to buy manual scavenging machines and robots. Sitharaman said mechanized cleaning could "[save] the manual scavengers their dignity."

There are already parts of the country where technology is on the job. In the southern Indian city of Hyderabad, for example, machines suck sludge out of sewers and clear pipes with high-pressure jets of water. But these machines are often too big to enter some narrow bylanes, particularly in dense urban areas. In those places, a human goes in.

Instead of humans, some Indian engineers want to send robots into manholes.

"We want to change manhole to robo-hole," says Arun George, a co-founder of Genrobotics, a Kerala-based startup that developed the robot. It's called Bandicoot, named after a species of rat found in sewers in the Indian subcontinent.

The Bandicoot robot is a promising solution because of its small size and portability, says Shanal Pradhan, a Delhi-based researcher and co-author of a paper on manual scavenging in urban India. "Big sewage cleaning trucks may not be able to navigate narrow settlements but the robot can," she says.

The robot looks like a four-legged animal that can stand over a manhole and lower down mechanical arms. Once inside the manhole, the arms extend and latch on to its walls to stabilize the robot. The main arm, which has a claw-like structure at the end, then lowers further and rotates to grab waste that's clogging the drain.

A suction machine can only pump out the liquid sludge. The solid residue is left behind in the sewer pipe. The robot can remove this solid waste clogging the pipe. In addition, it can also send a high-pressure jet of water to clear blockages.

The robot also has cameras to help locate the sludge is and navigate toward it. Its carbon fiber structure is resistant to corrosion and can withstand sludge and toxic gases.

But paying for this advanced technology can be a hurdle. The Bandicoot robot can cost as much as $50,000. Pradhan says municipalities take advantage of cheap human labor rather than invest in these technologies.

"What is lacking in India is the political will," she says.

George says the cost will decrease when the robot is manufactured on a large scale. He also says the robot won't put humans out of work, and hopes to train manual scavengers to become robot operators.

About a dozen such robots have been deployed across the country. George says he has received orders for dozens more.

When protesters call for an end to the profession, they add another demand: retrain the workers. It's difficult for manual scavengers to break away from this line of work. One reason is India's ancient caste system, which has traditionally dictated a person's occupation. The vast majority of manual scavengers are from the lower castes, which used to be known as "untouchables." 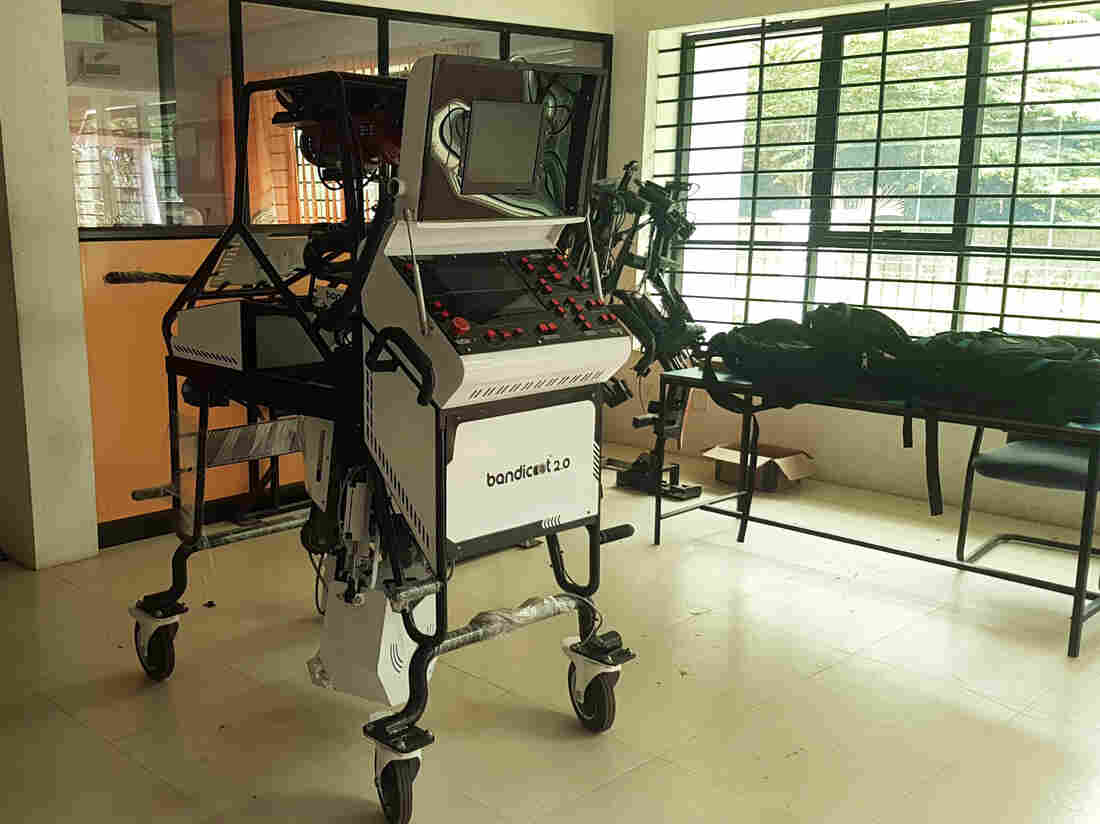 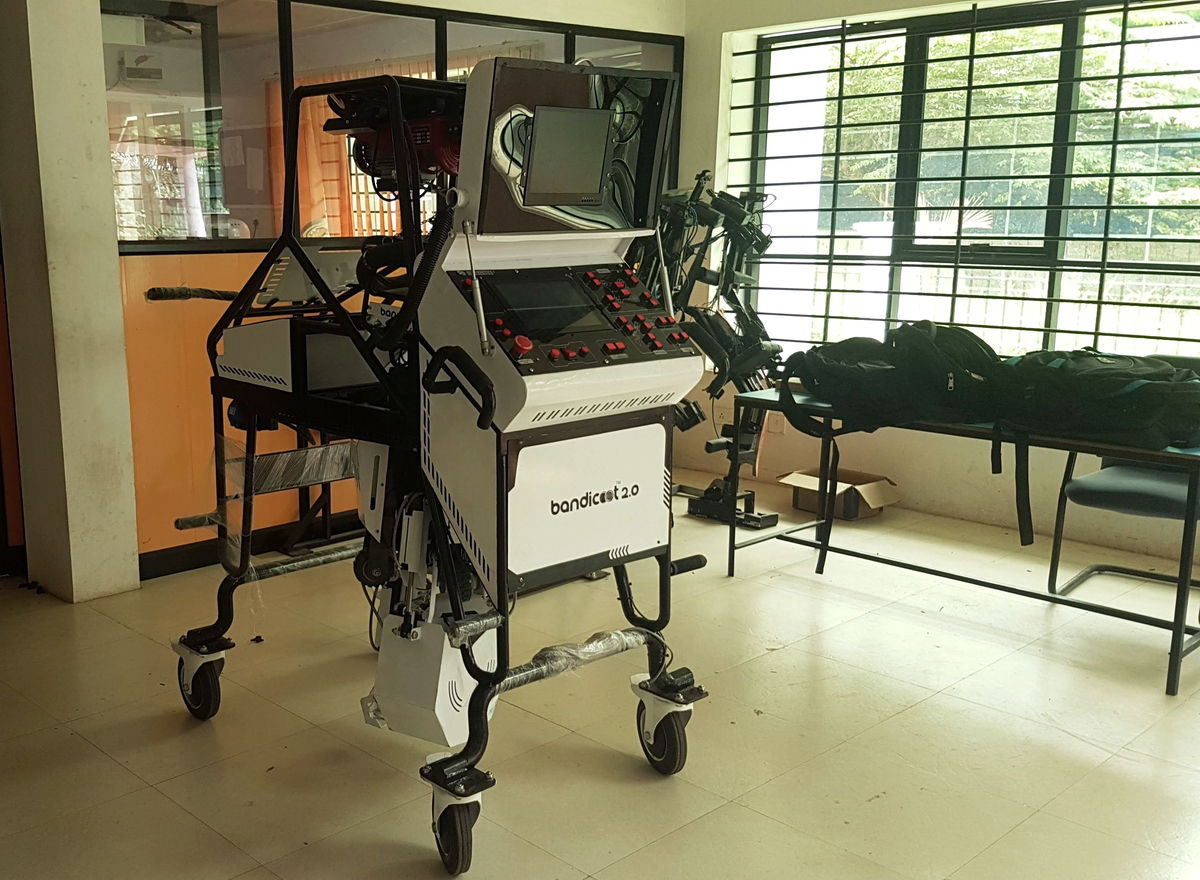 The Bandicoot robot can go inside manholes to unclog sewer pipes.

"Caste is a vicious cycle," says Sunil Kasare, 51, a low-caste manual scavenger who cleans sewage and trash from alleys in southern Mumbai. "My grandmother was a manual scavenger, and my son will probably end up being one too. I'll have to do this type of work till the day I die."

Caste-based discrimination makes it hard for people from lower castes to get a job other than manual scavenging, Wilson says. Many of them come from poor families and are uneducated. Cleaning sewers may be their only option even if it puts their life in danger.

"We must create a society where human beings should not clean others' s**t," Wilson says.