Accessibility links
Breaking The Silence To Learn The 'Truth' About Ganbia's Former President : Goats and Soda In the West African nation of Gambia, people are transfixed by testimony about alleged abuses by former President Yahya Jammeh. Abdoulie Nyang listens to the hearings of the truth commission on the small black radio in his palm. Samantha Reinders for NPR hide caption

Abdoulie Nyang has a small black radio in his palm. He's sitting in front of his neighbor's clothing shop and listening to the hearings of the Gambian Truth, Reconciliation and Reparations Commission.

The mandate of the commission is to investigate crimes and human rights abuses allegedly committed under the regime of former President Yahya Jammeh, who came to power in a coup d'etat in 1994. Jammeh flew into exile in Equatorial Guinea in 2017 — taking millions of dollars and a personalized Rolls-Royce with him from the low-income country. He left a horrifying legacy in his wake. 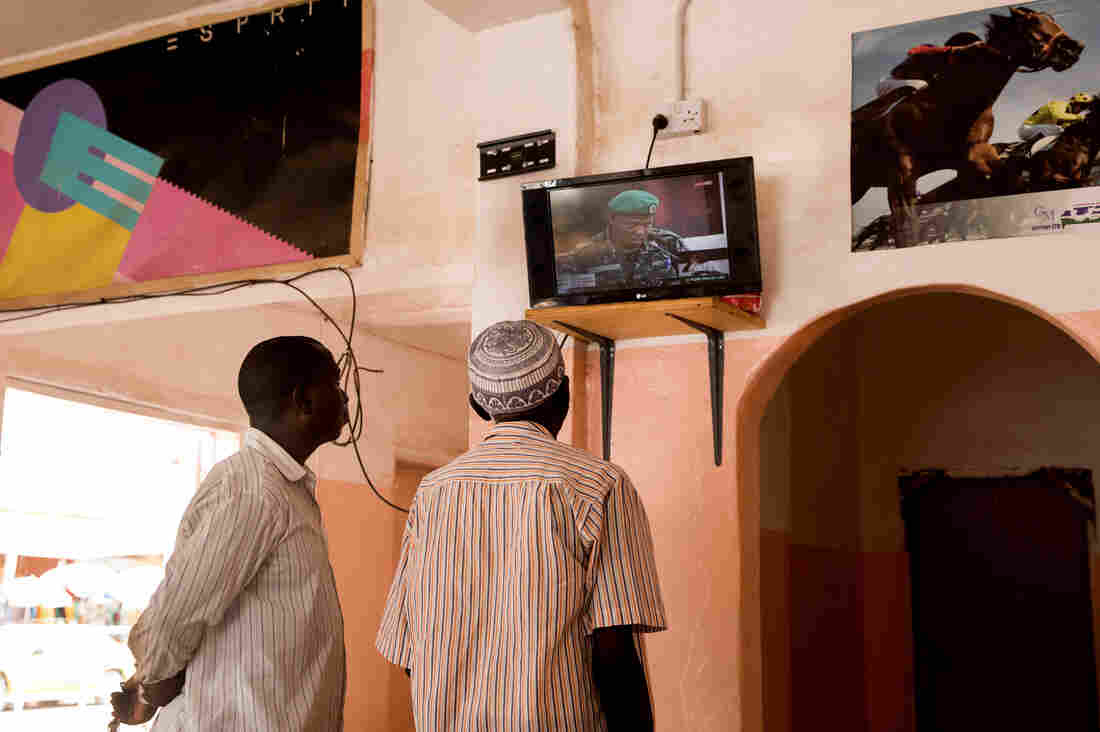 Gambians are glued to TV and radio as members of a paramilitary that worked with former Gambian President Yahya Jammeh testify before the Truth, Reconciliation and Reparations Commission. The hearings are investigating alleged human rights abuses during Jammeh's tenure in office, from 1994 to 2017. Samantha Reinders for NPR hide caption 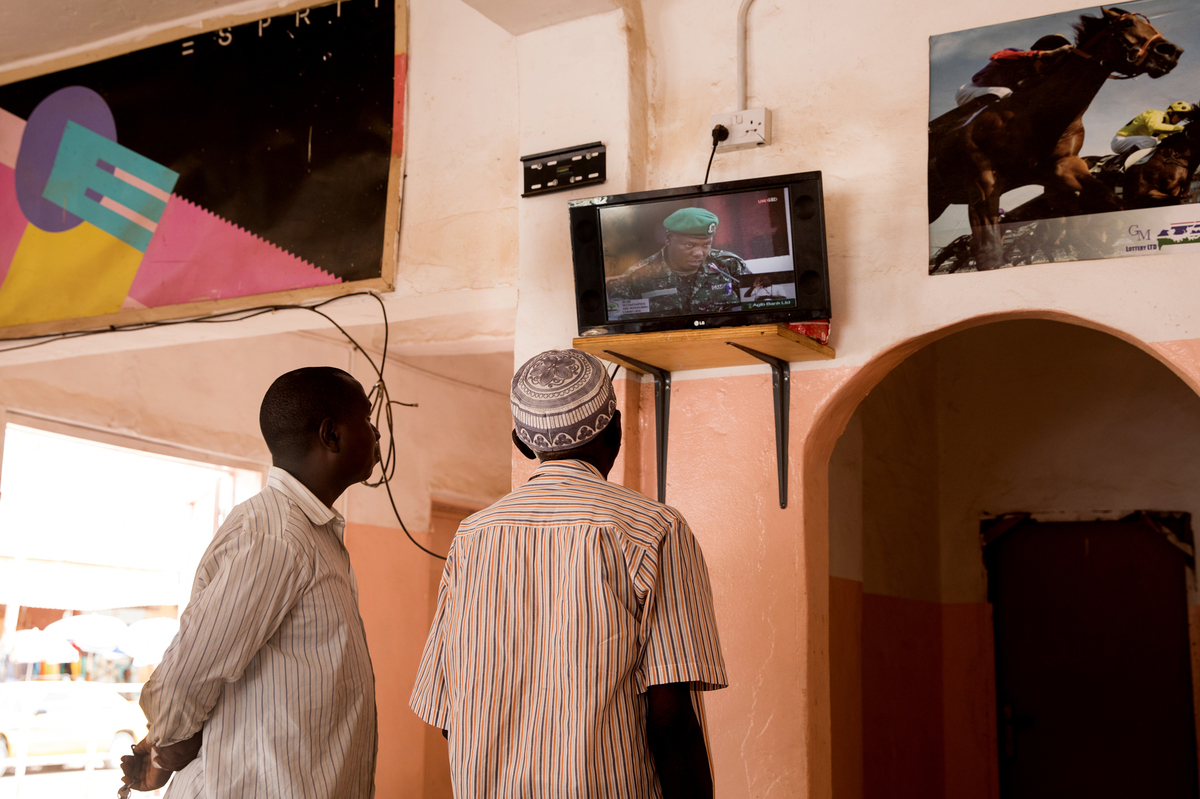 Gambians are glued to TV and radio as members of a paramilitary that worked with former Gambian President Yahya Jammeh testify before the Truth, Reconciliation and Reparations Commission. The hearings are investigating alleged human rights abuses during Jammeh's tenure in office, from 1994 to 2017.

Gambia is a long, narrow West African nation of 2 million people that protrudes into Senegal. Across the capital, Banjul, it's very easy to tell when the truth commission is in session. Everywhere you look people are clustered around televisions. A woman in a betting shop listens on her cellphone. Cab drivers have the hearings blaring from the radios in their beat-up Mercedes taxis.

"We are thanking God that we have a commission to look into those past atrocities. Now we are hoping that justice will prevail."

The atrocities Jammeh's regime are accused of are gruesome and numerous — and were often hidden.

"We all feared him," Nyang says. "No one was able to say or think something in Jammeh's era."

Often there were rumors about people being killed or tortured. But it was hard to know whether stories were true, he says. And people were terrified to ask about such things.

Now former members of a paramilitary group called the "Junglers" are publicly testifying at the commission's hearings about how they carried out Jammeh's reign of terror.

The commission has the power to grant reparations to victims and amnesty to perpetrators except for crimes against humanity. 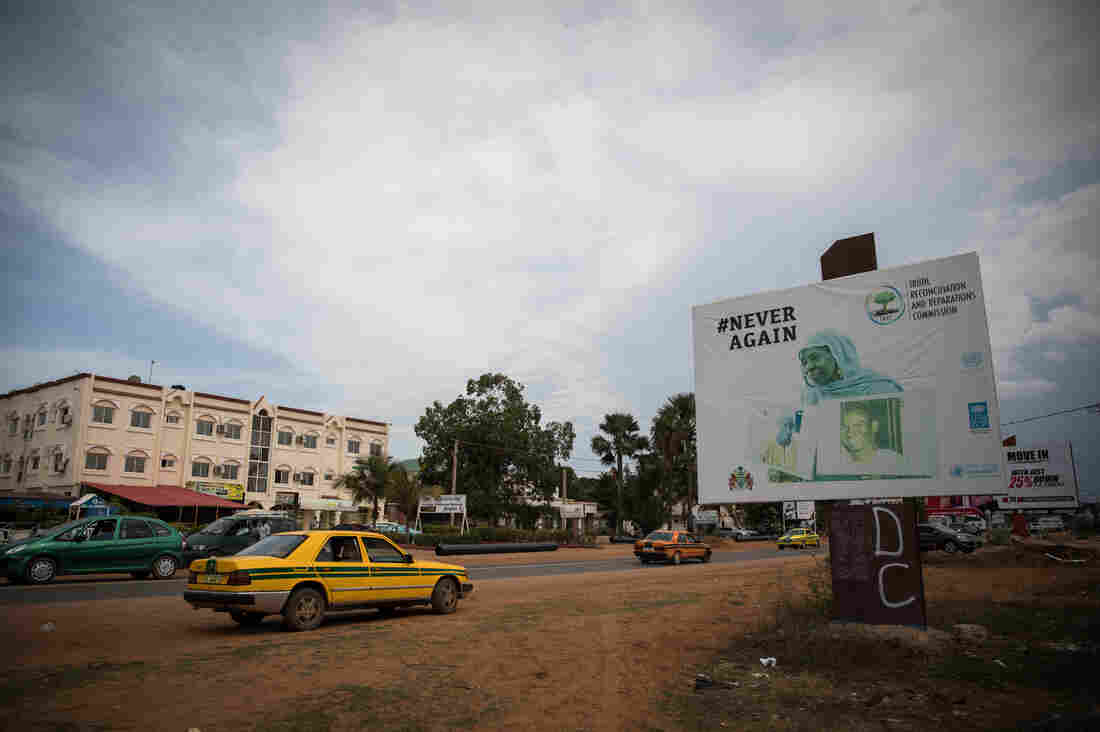 Billboards in Gambia promote the ongoing hearings of the truth commission. This one is on the outskirts of the capital city of Banjul. Samantha Reinders for NPR hide caption 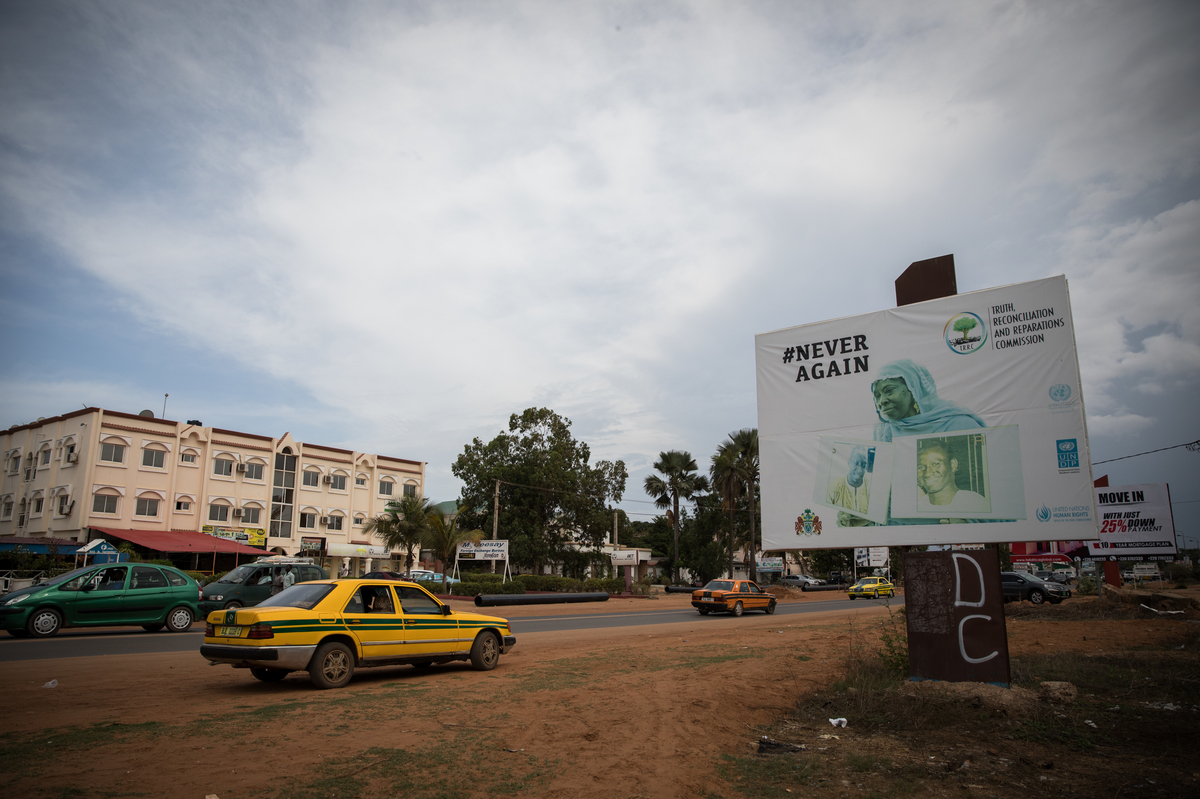 Billboards in Gambia promote the ongoing hearings of the truth commission. This one is on the outskirts of the capital city of Banjul.

Speaking through an interpreter at a truth commission hearing in July, Omar Jallow detailed how he and several other members of the Junglers suffocated and decapitated two Gambian Americans in 2013. Sitting behind a white table in military fatigues and a green beret, Jallow said that Jammeh ordered the killings. Family members of the two young men say they had returned to Gambia to set up businesses, but Jallow testified that Jammeh said they had come to overthrow his regime.

"We took them, put them inside the grave. We buried them. And we left for home," Jallow testified.

He went on to detail how the Junglers operated as Jammeh's hit squad. On the president's orders, he says, the Junglers executed 56 African migrants in 2005 and dumped them in wells near the border with Senegal.

Members of the paramilitary unit have admitted to the commission that they killed inmates at a local prison, suffocated a former top military official, murdered a prominent journalist, tortured political opponents, even killed a former ally of the president's in his hospital bed. And they did all of this, they have testified, on the orders of Jammeh. Before fleeing into exile Jammeh repeatedly denied that these atrocities had occurred.

The commission's lead attorney, Essa Faal, pushed another member of the Junglers, Amdou Badjie, on why he had participated in torturing, kidnapping and killing people.

Responding through an interpreter, Badjie squirmed at the witness table.

"I knew that it was bad," Badjie said. "But we soldiers, whenever you are given a command by your seniors you have to follow it."

Faal, the attorney, did not accept this. "But you know that you don't have to follow an unlawful or illegal command," Faal said.

Badjie's eyes darted around the room, avoiding the attorney's.

"Yes, I know that," Badjie said. "But when you refuse to carry out orders given to you by your senior, what befalls you is really something very bad."

As the hearing proceeded Badjie eventually asked for forgiveness from two imams whom he had tortured.

The commission will decide later whether to grant amnesty to some of the alleged perpetrators in exchange for their truthful testimony about the abuses of the past.

Madi Jobarteh, a longtime social activist in Gambia, says even to him, someone who followed the abuses of the Jammeh regime and called for political reforms, the testimony at the truth commission has been a revelation.

"I mean it's all just shocking to me," Jobarteh says of the hearings. "I'm like, wow!"

Jobarteh says he sees the commission as a very important step for the country to move past the Jammeh years. He calls the process "necessary."

"In the testimony so far you can see how ordinary youths, women, men you know, religious leaders, ordinary folks played a part in building this dictatorship that we had," he says.

The hearings were on break last week but have resumed this week with more testimony from other members of the Junglers.

Lots of people in Gambia will be watching.