Accessibility links
Getting A Gun License In Punjabi District Now Requires Planting 10 Trees : Goats and Soda That's the new rule in Ferozepur, a district in India's Punjab state. As proof you have to submit a photo of yourself with your saplings.

To Get A Gun License, First You Have To Plant 10 Trees

To Get A Gun License, First You Have To Plant 10 Trees 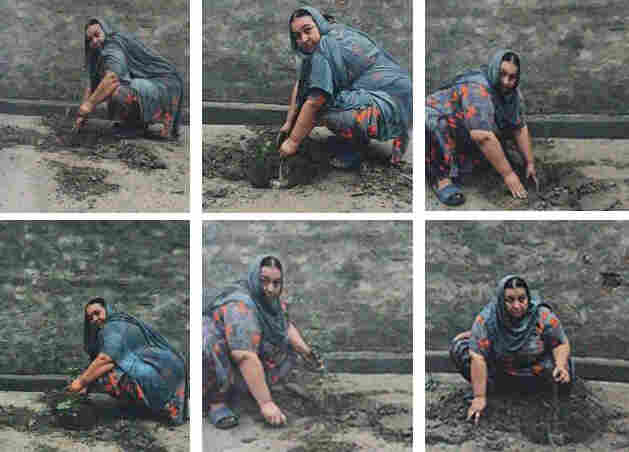 This tree-planting photo was submitted with an application for a gun license in Ferozepur, a city in India's Punjab state. Courtesy of the Deputy Commissioner of Ferozepur District hide caption

toggle caption
Courtesy of the Deputy Commissioner of Ferozepur District 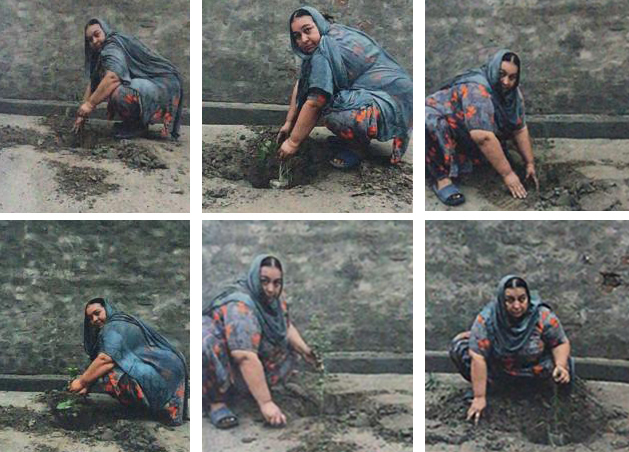 This tree-planting photo was submitted with an application for a gun license in Ferozepur, a city in India's Punjab state.

Courtesy of the Deputy Commissioner of Ferozepur District

Tajinder Singh, 47, a farmer in the North Indian state of Punjab, applied for a gun license. He told the authorities that he needed a revolver for self-defense. While tending to his 20 acres of land, he often had to walk long hours to reach home after nightfall. He wanted to protect himself from wild animals and bands of armed robbers.

Once the background checks were completed in June this year, Singh was told he had to fulfill one more condition to get his gun.

He had to submit two photos: One showing him planting 10 saplings on his property, and then another with the thriving trees one month later.

To mark World Environment Day in June, Chander Gaind had an idea. He's the deputy commissioner of the district of Ferozepur — roughly the equivalent of an American mayor. "I thought about how much Punjabi people love guns," Gaind told NPR. "We receive hundreds of applications for gun licenses from this district every year. Maybe I could get them to love caring for the environment too."

And so he decided that anyone who applied for a gun license from this district, home to 2 million people, would need to sprout a green thumb first. And that's how the ten tree rule was born.

The goal wasn't to discourage people from getting a gun licence, Gaind says.

Gun licenses in India are already subject to stringent regulations. To apply, you need to pay a modest fee of $7-$30 and furnish a certificate of proof that you've completed a course in firearm handling and safety. You also need to provide a health certificate establishing your physical and mental health along with tax returns and other identity documents.

Before a license is issued, local police interview the applicant's family members and neighbors. In addition, the applicants must appear for an in-person interview with the issuing authority. All this is seen by police and administrative authorities as essential to ascertain whether one's need for a gun is valid. Anyone with a criminal record or a history of domestic abuse is immediately rejected.

According to statistics released by India's Home Ministry in 2016, India has over 3.3 million active gun licenses. Over 10% of these are estimated to come from the state of Punjab.

"Over the years, the highways of Punjab have been widened. This has led to the loss of many trees. And in a state where we grow a lot of wheat and paddy, both crops that consume plenty of ground water, we needed to find a way to restore those resources," says Gaind.

His terms were met with amusement and surprising goodwill.

"It was a very unusual condition, but it made me happy to hear it," says Singh. "I thought of all the different kinds of people applying for licenses — this rule will teach them something. It will do them good." As an agriculturalist, he had no problem complying, he says. He planted a lime tree (Citrus aurantifolia) and trees native to Punjab like the baheda, tilkan, harad and sent the photos in.

At the end of July, Tajinder Singh received his license.

"It's a very interesting initiative," says Alok Kumar Dubey, a consultant in public policy and social development at the NITI Aayog (National Institute for Transforming India), the top think tank for the government of India. NITI Aayog encourages innovation — primarily in health, nutrition, education, agriculture, infrastructure and finance. When Dubey paid a visit to Ferozepur, he met a few of the applicants who had come to the administrative office with their paperwork for the gun license and saw the photos they'd taken with the trees they'd planted. He then went on field visits to view the saplings.

"I like the way the administrators have used this opportunity to foster sensitivity and love for the environment," he says. "Other districts should follow this too."

In India, on average, gun licenses need to be renewed every one-to-three years. In the months ahead, the Ferozepur district authorities are considering extending this tree-planting rule for those applying to renew their licenses too. The nearly 500 renewal applications a month would then mean a monthly gain of 5,000 trees.

"In Punjab, people like to embrace life and live it well, and I believed that this was a way to channel all that energy and passion for a good cause," Gaind says. "Learning to care for the environment, to plant trees, to sustain life — all this could possibly turn out more responsible gun owners."

Kamala Thiagarajan is a freelance journalist based in Madurai, India, who has written for The International New York Times, BBC Travel and Forbes India. You can follow her @kamal_t