Accessibility links
The Plague Of Locusts Might Be Controlled By Farming Practices : Goats and Soda A lab at Arizona State University tries to find new ways to combat the global scourge of locusts. One solution may have to do with farming practices. 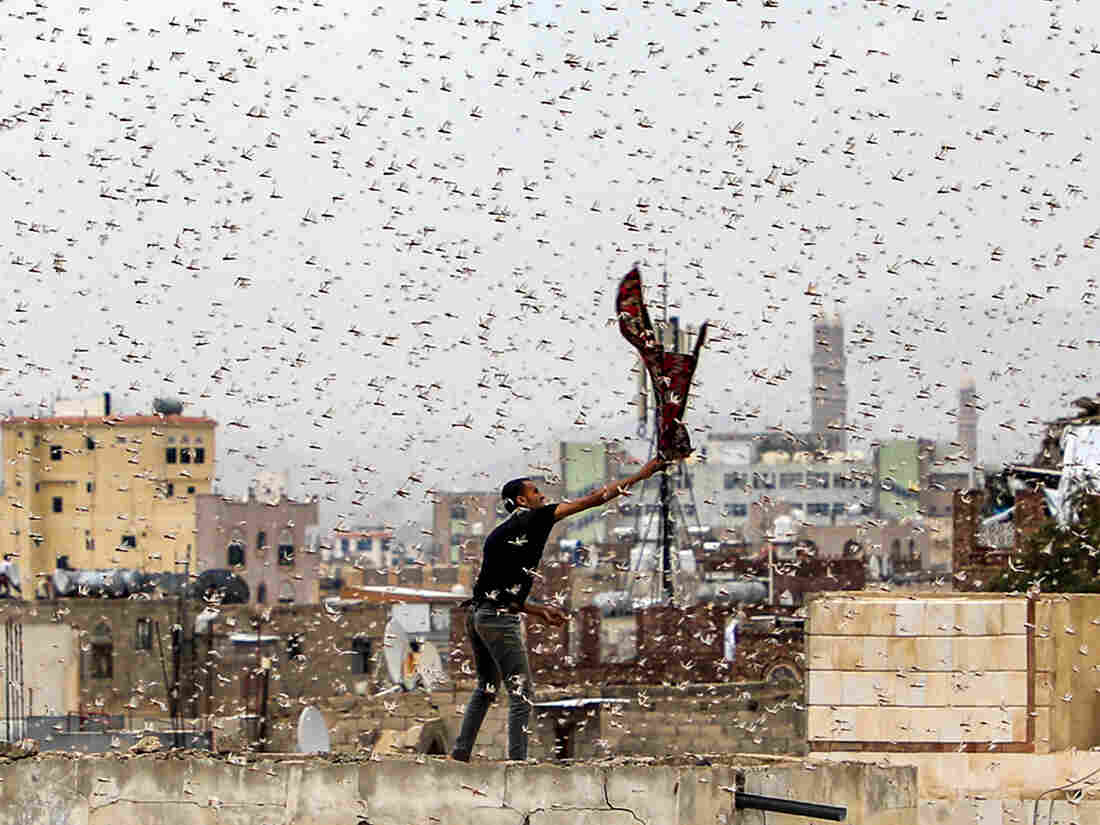 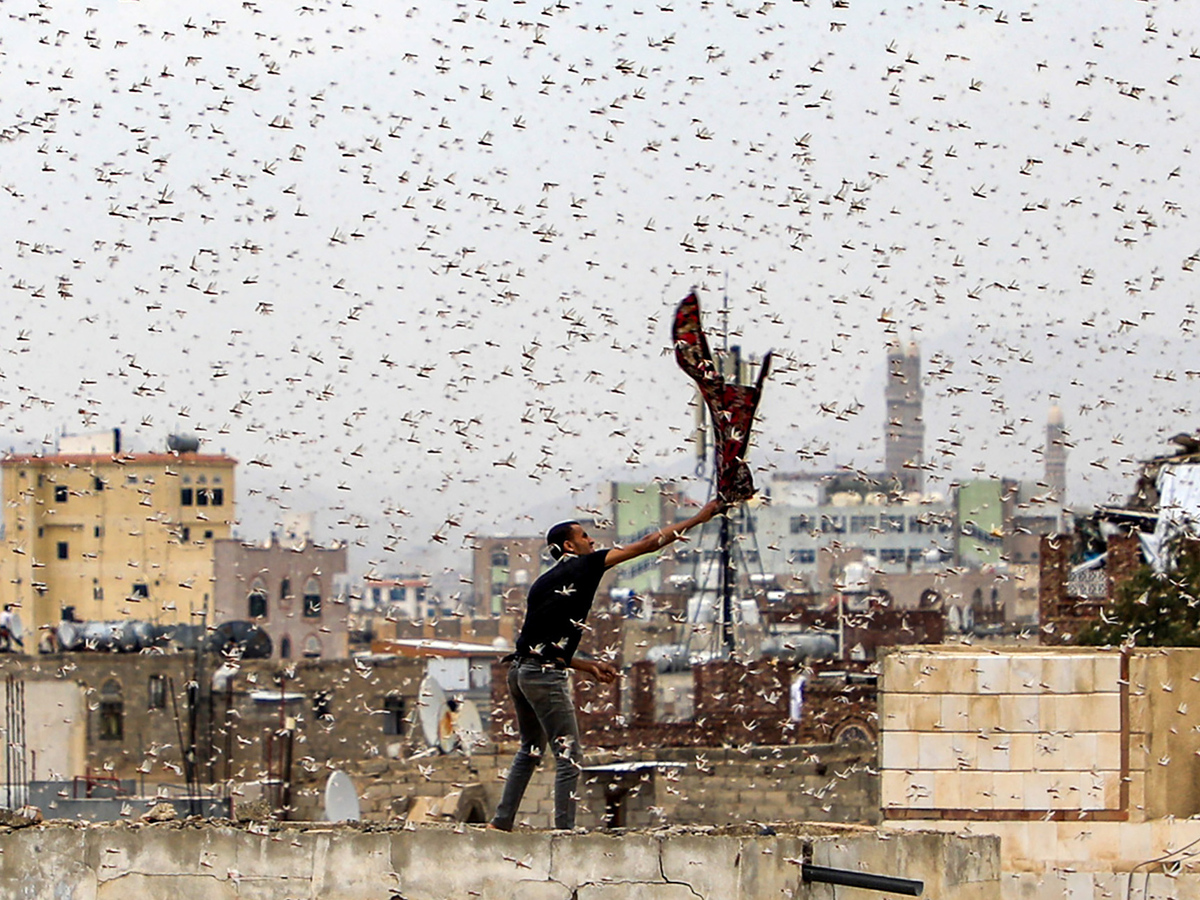 Locusts are not just a biblical plague. They're swarming around the world. Still. Again.

According to the Food and Agriculture Organization of the United Nations, the desert locust situation is serious in Yemen and at the Indo-Pakistan border.

"One swarm covering one square kilometers contains 50 million locusts, and this swarm can eat the equivalent of 100 tons per day," said Wajeeh Mutawakel, the director general of the Plant Protection Office in the Houthi rebel-controlled Yemeni capital Sanaa, the Middle East Eye reported. "This may cause disaster not only in Yemen but also in other countries, such as in Saudi Arabia."

Small clusters of locusts have been detected in Ethiopia and Somalia. Argentina continues to experience swarms years after major outbreaks in 2017.

Locusts have been a threat to food security since biblical times. They are voracious eaters and are difficult and expensive to control. For example, according to a 2005 paper, it cost $450 million to stop the 2003-2005 desert locust plague in Africa that caused $2.5 billion in crop damage. 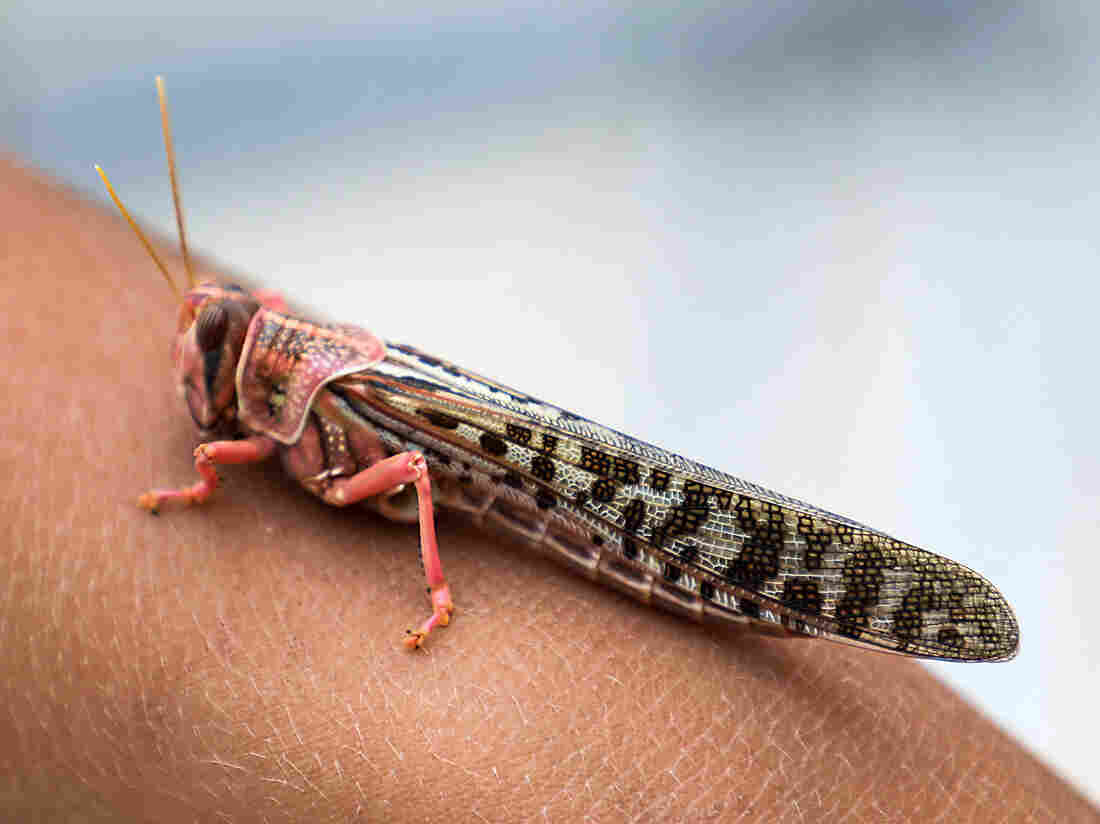 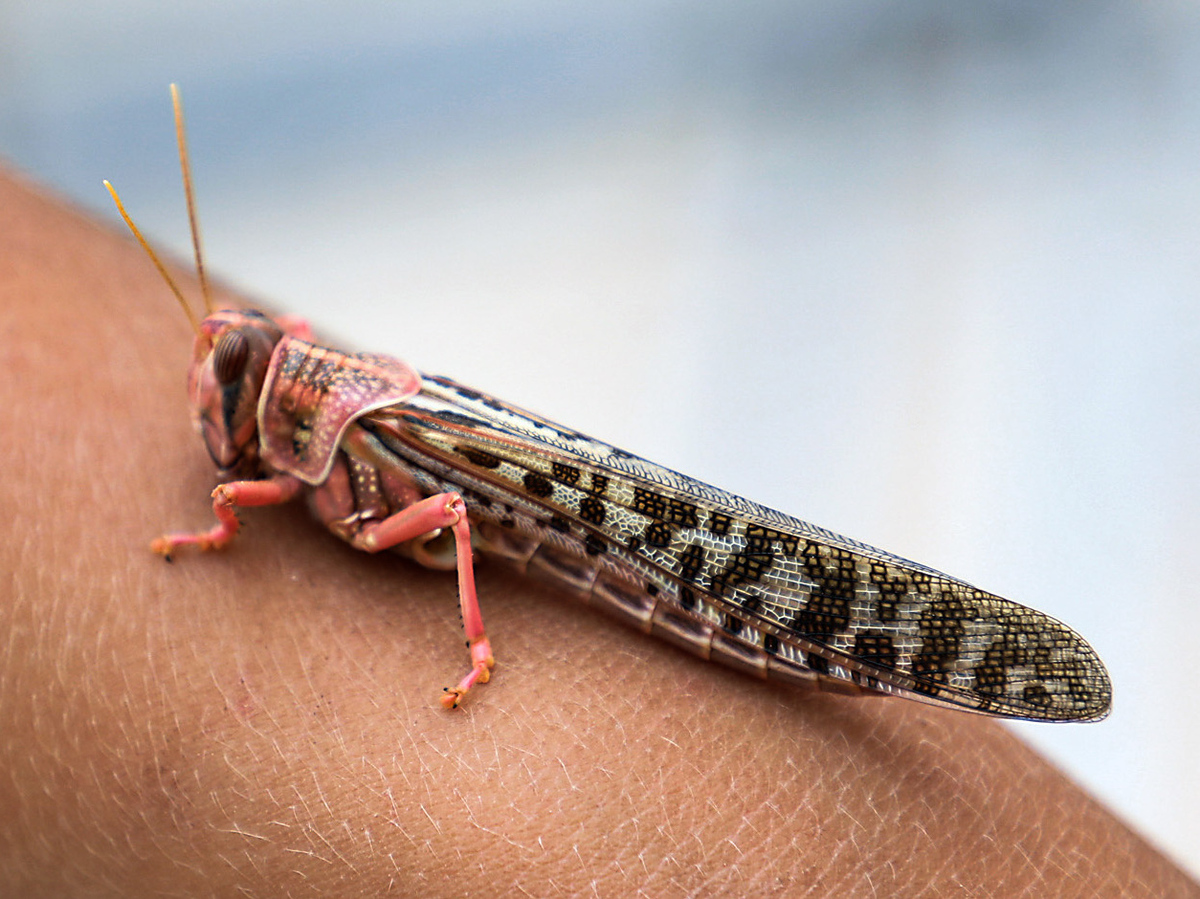 A desert locust sits on a child's arm in Yemen.

That's why scientists at Arizona State University have created the Global Locust Initiative. It seeks to "link partners and ideas and to avoid reinventing the wheel," says Arianne Cease, director of the initiative. The idea is to get people information they need before a plague occurs.

Cease first became aware of the devastation locusts can bring while she was in the Peace Corps in West Africa. But it's a problem around the world — and once upon a time in the United States. She says many people are surprised to learn that the largest swarm ever recorded took place over the U.S. Plains states in the 1870s.

"[It] was about the size of the state of California," Cease says. "You had swarms flying overhead for four days, and whenever they landed they pretty much ate everything. It was really devastating."

At the time, people kept waiting for another swarm to come, but it didn't. Within a few decades, the Rocky Mountain locust, the source of the swarm, was declared extinct.

Why it went extinct may never be fully known, but Cease says the best hypothesis is that it had something to do with changes in farming practices.

"Bringing in lots of cows for example," Cease says. "Tilling areas that hadn't been tilled before." 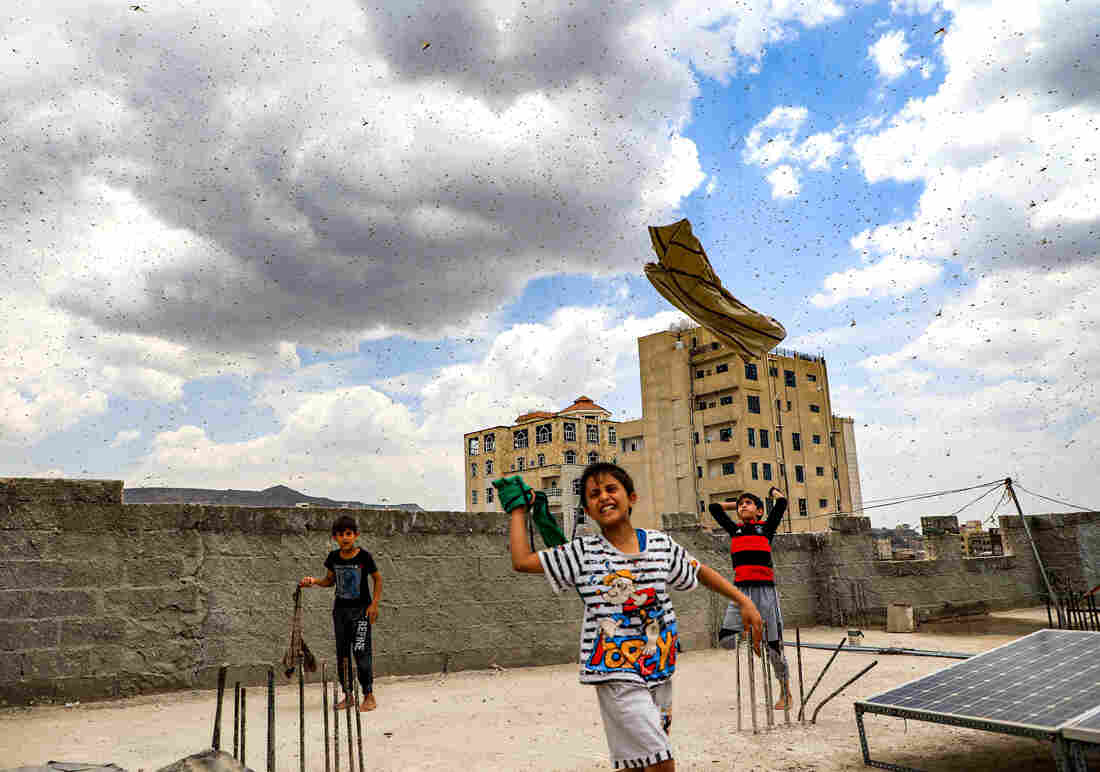 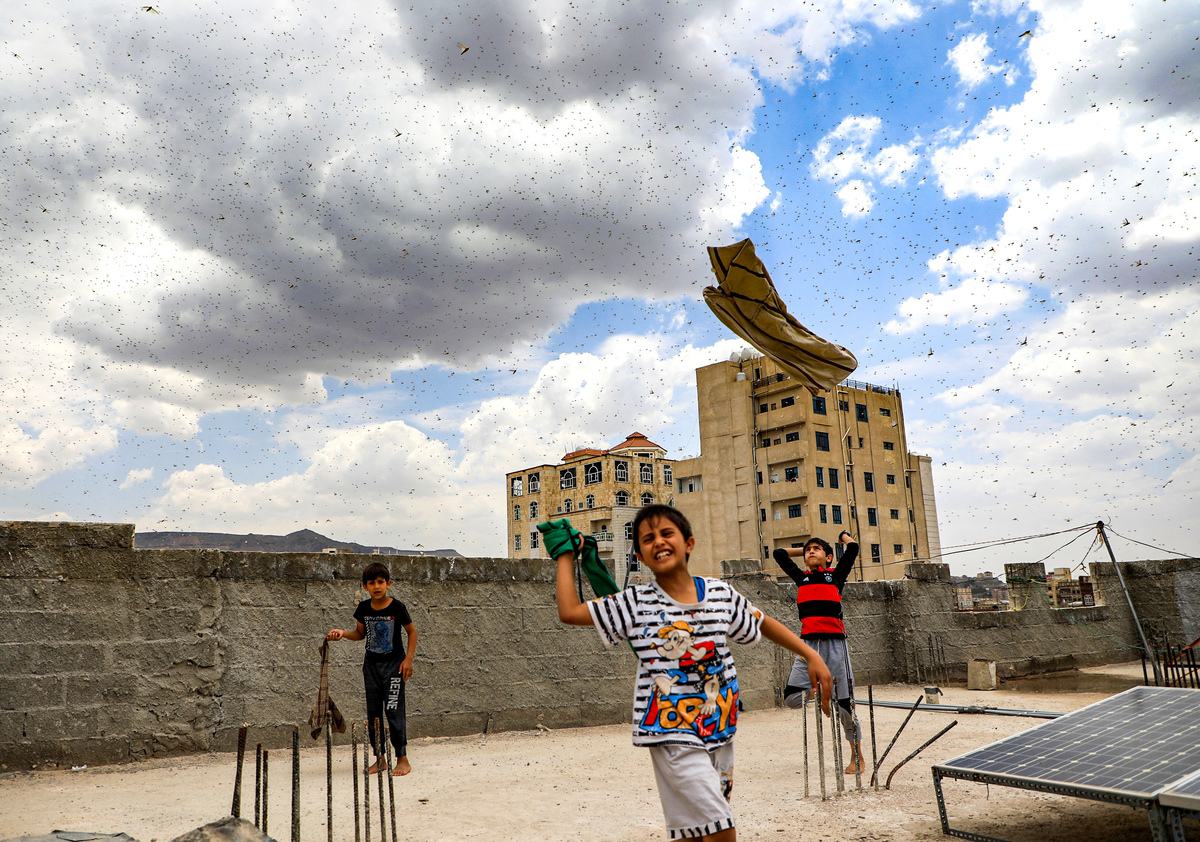 The fact that human behavior might have contributed to the demise of the Rocky Mountain locust is intriguing.

"We're really interested in that connection between people and locusts," Cease says.

She says there is no single answer to controlling locusts. For a variety of practical and human health related reasons you can't just spray them into submission with pesticides. You need a multifaceted approach.

But first, you have to know your enemy. That's why there's a special lab in the basement of a building on the Arizona State University campus that houses the Locust lab, or "Hopper Town" as it's known. The lab has restricted entry, so you can't just wander in, and there are multiple barriers that make sure none of the locusts wanders out.

Lab research director Rick Overson showed me around this spring. He takes me into a room with wire mesh cages filled with locusts.

"So this is the locust colony," Overson says. "In this room we have at any given time from four to five different species of locusts."

Overson says the lab is studying all aspects of locust life — how they behave, what microbes are in their gut — looking for weaknesses they can exploit. One promising avenue of research involves what locusts like to eat.

"It turns out that every locust we've studied to date is very carbohydrate hungry and does well and performs well on carbohydrate- or sugary-based diets," Overson says.

That has implications for farmers. The lab also does field research in Senegal, where farmers grow millet.

What To Feed Locusts

The lab has published research showing that the farmers who grow their millet sustainably — maintaining healthy soil nutrients — tend to produce a crop that's relatively low in carbohydrates.

"Fortuitously what we're finding with our research is actually that those are places that locusts tend to not like," Cease says.

She's trying to demonstrate experimentally that altering farming practices may be a viable way to combat locusts.

"The challenge comes in implementing that," she says.

Implementation means getting farmers, agricultural officials and nongovernmental organizations working together on the solution. That's not quite as hard as trying to wrangle locusts, but it's still a challenge.