Accessibility links
Trump's Interest In Buying Greenland Strikes Greenlanders As Comical — And Infuriating : Goats and Soda The majority are Inuit. They laugh about his interest but also take it seriously. One says such talk is "extremely imperialistic and should not be something that we hear world leaders say in 2019."

What Do Greenlanders Think Of Trump's Interest In Buying Greenland?

What Do Greenlanders Think Of Trump's Interest In Buying Greenland? 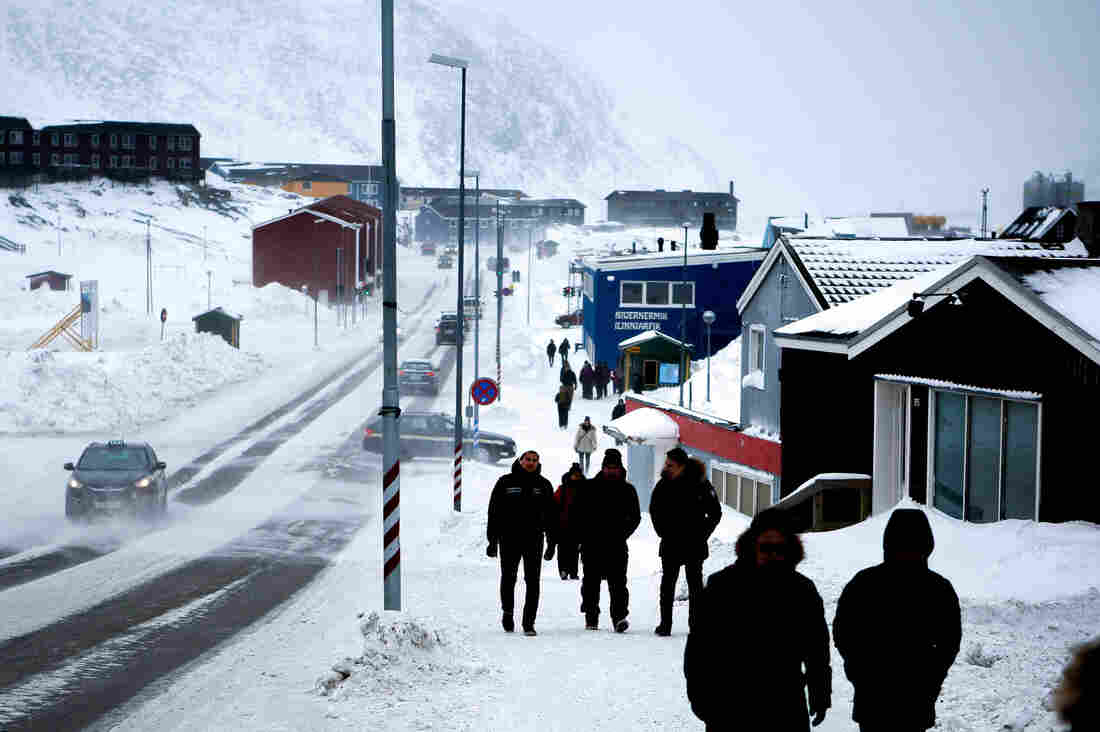 The capital of Greenland is also its largest city — Nuuk has a population of about 18,000. Aqqusinersuaq Road (above) leads into the city center. John W. Poole/NPR hide caption

Lost in all the brouhaha about President Trump's scuttled plan to buy Greenland from Denmark has been this: What do the Greenlandic people think about the whole thing?

In the small capital city of Nuuk, "everybody is talking about it," says Alexander Montgomery-Andersen, a 30-year-old Greenlandic dancer and choreographer. "It's a little comical."

Greenlander Lasse Norregaard suggested on Facebook that Trump trade Hawaii to Greenland in exchange "for an area of the same approximate size on the Greenland ice cap." The area, he said, "will be the perfect geopolitical stronghold for you to do whatever you wish." Others joked that maybe all this talk would improve tourism, which is a fairly young industry. 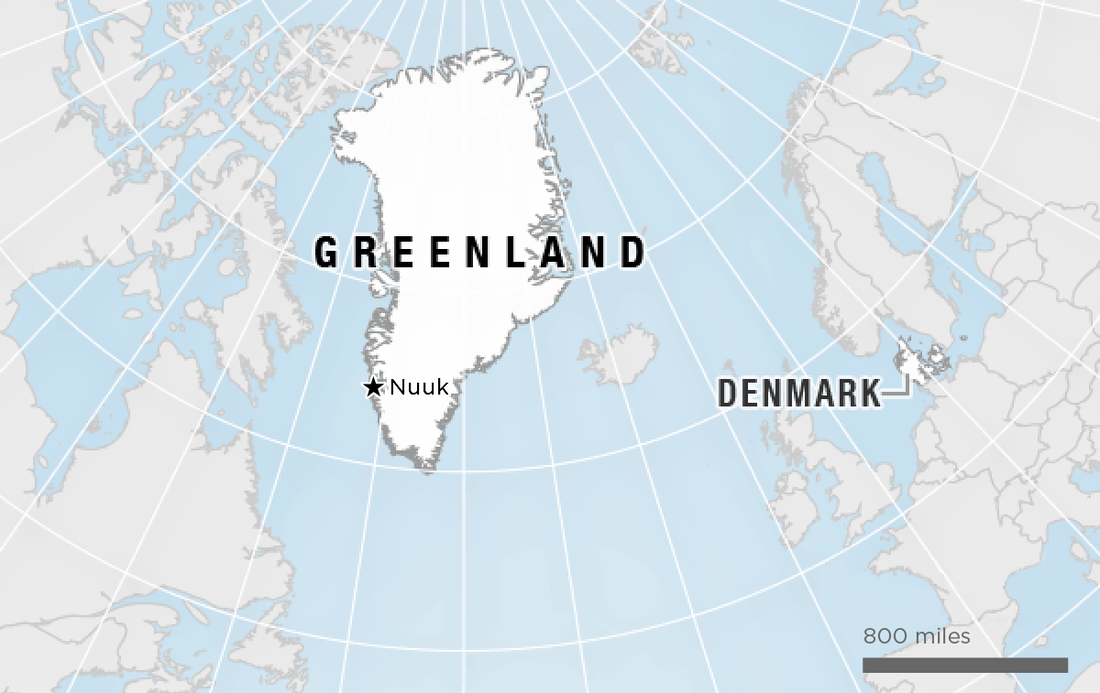 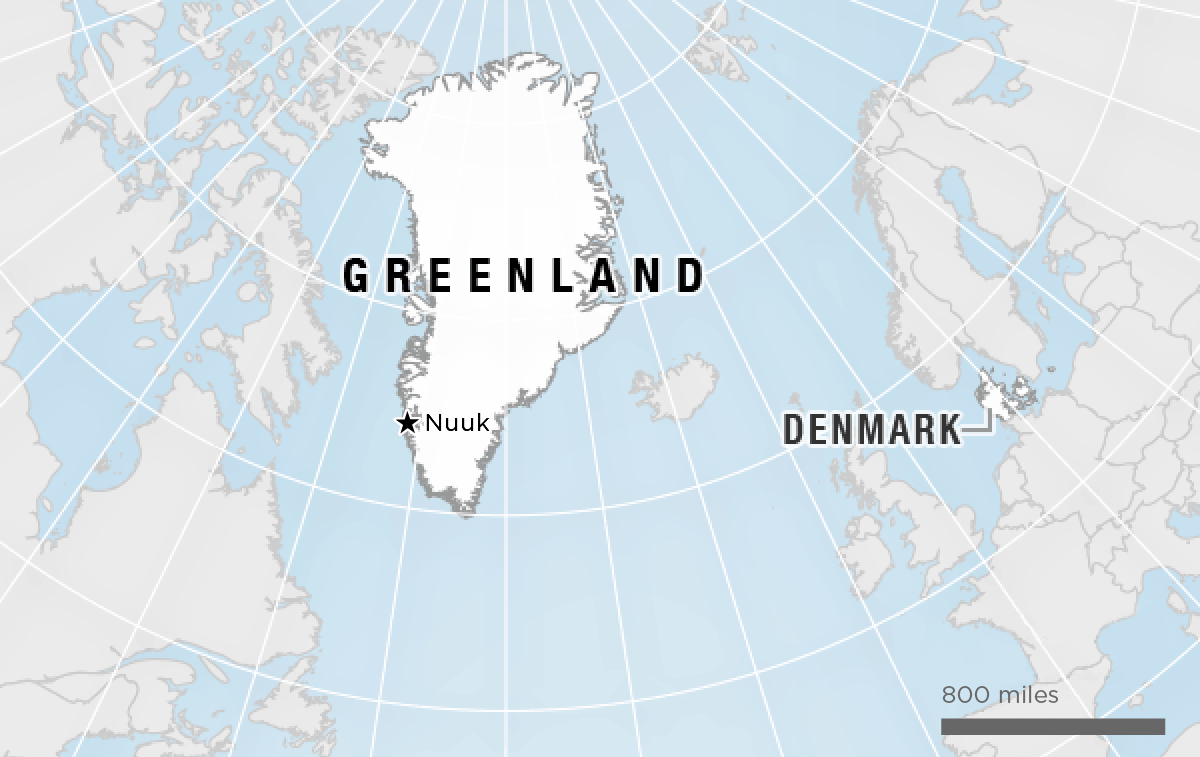 But many Greenlanders were angered and upset by Trump's comments, which they consider a threat to their sovereignty and human rights.

"It's dead serious for Greenland," says Aqqaluk Lynge, a former president of the Inuit Circumpolar Council.

"To talk about buying a whole nation and the people is, I think, extremely imperialistic and should not be something that we hear world leaders say in 2019," says Sara Olsvig, a former Greenlandic politician who now works in human rights. "It shows that we are still living in a world where indigenous peoples, or self-governing nations even within states, are seen as something that can be bought and sold."

The relationship between Greenland and Denmark is long and complicated. While Greenland was once a colony, it hasn't been one for decades. The prime minister of Denmark, Mette Frederiksen, visited Nuuk last weekend and told reporters, "Greenland is not Danish. Greenland is Greenlandic." 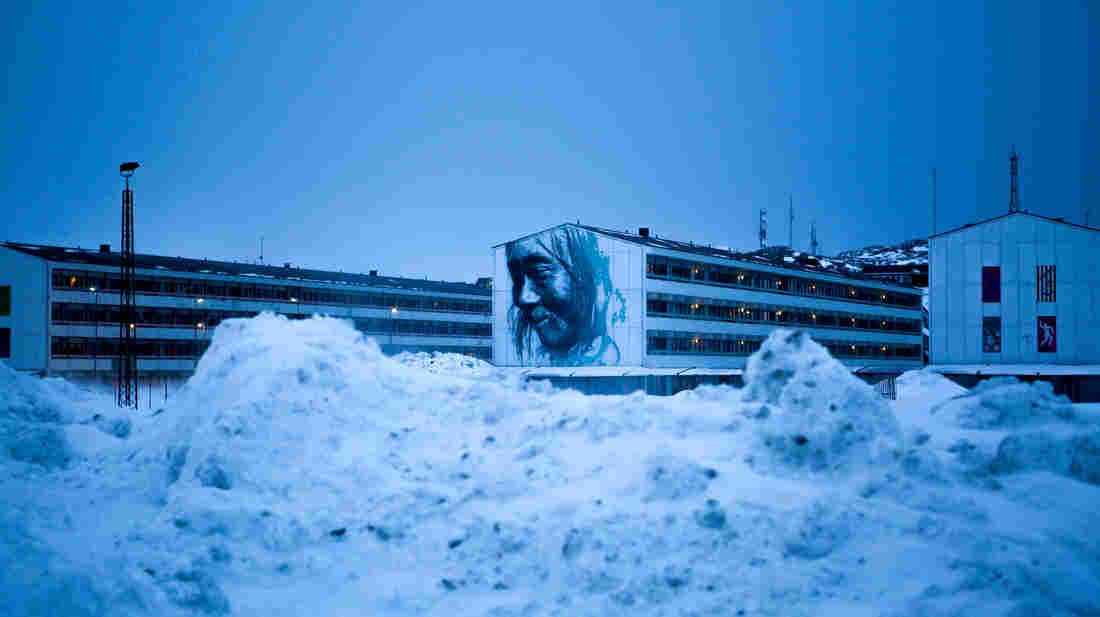 Apartment blocks dominate central Nuuk. A mural commissioned by the city is a large-scale reproduction of a photograph from the early 1900s. John W. Poole/NPR hide caption

So what is Greenland's political status? It is a bit complicated. Today, Greenland is still part of the Danish Kingdom — but it is not owned by Denmark, and it is not a Danish colony. Greenland has its own parliament and government — though some issues, like defense and security, are handled in Copenhagen. In recent decades, there's been a move by Greenlanders toward autonomy and, perhaps ultimately, full independence.

Currently the island's population is only 58,000 people though the country is enormous — three times the size of Texas. Most Greenlanders have indigenous roots. "The history of Inuit people in Greenland goes 4,500 years back," Olsvig explains. "Our people — the Inuit people — have been living in the Arctic, moving back and forth across the Arctic between Russia and Greenland, for many, many thousands of years."

Over those thousands of years, Inuit people hunted and fished in the harsh, icy environment — around 80% of the island is covered by a gigantic ice sheet. "Traditionally, Inuit people are a nomadic people — we would travel to wherever we could hunt and live different places on the land during summer and during winter," she says.

Some of the first qallunaaq, or white people, to arrive in Greenland were the Vikings around 980. "That was Erik the Red, and he was the guy who named Greenland 'Greenland.' " Olsvig adds, "South Greenland is quite green, actually, but if you look at the world map you will see that Greenland is quite white because we have the ice cap."

The Viking settlers apparently didn't make it through the little ice age that began in the 1300s. "In 1721, a Christian missionary from Norway came to Greenland, and he didn't find any of the Norse people, but he found Inuit," Olsvig says. His name was Hans Egede — at the time, Norway was part of the Danish Kingdom. "That, we see as the beginning of the colonization."

After the missionaries started to arrive, Greenlanders began to settle in towns and give up the nomadic life. Danish and Greenlandic people have intermarried over generations — many people who identify as indigenous Greenlandic people have Danish names; many also have blue eyes. Around 95% of Greenlanders are Protestant, although many people also practice spiritual rituals that predate the Nordic missionaries. 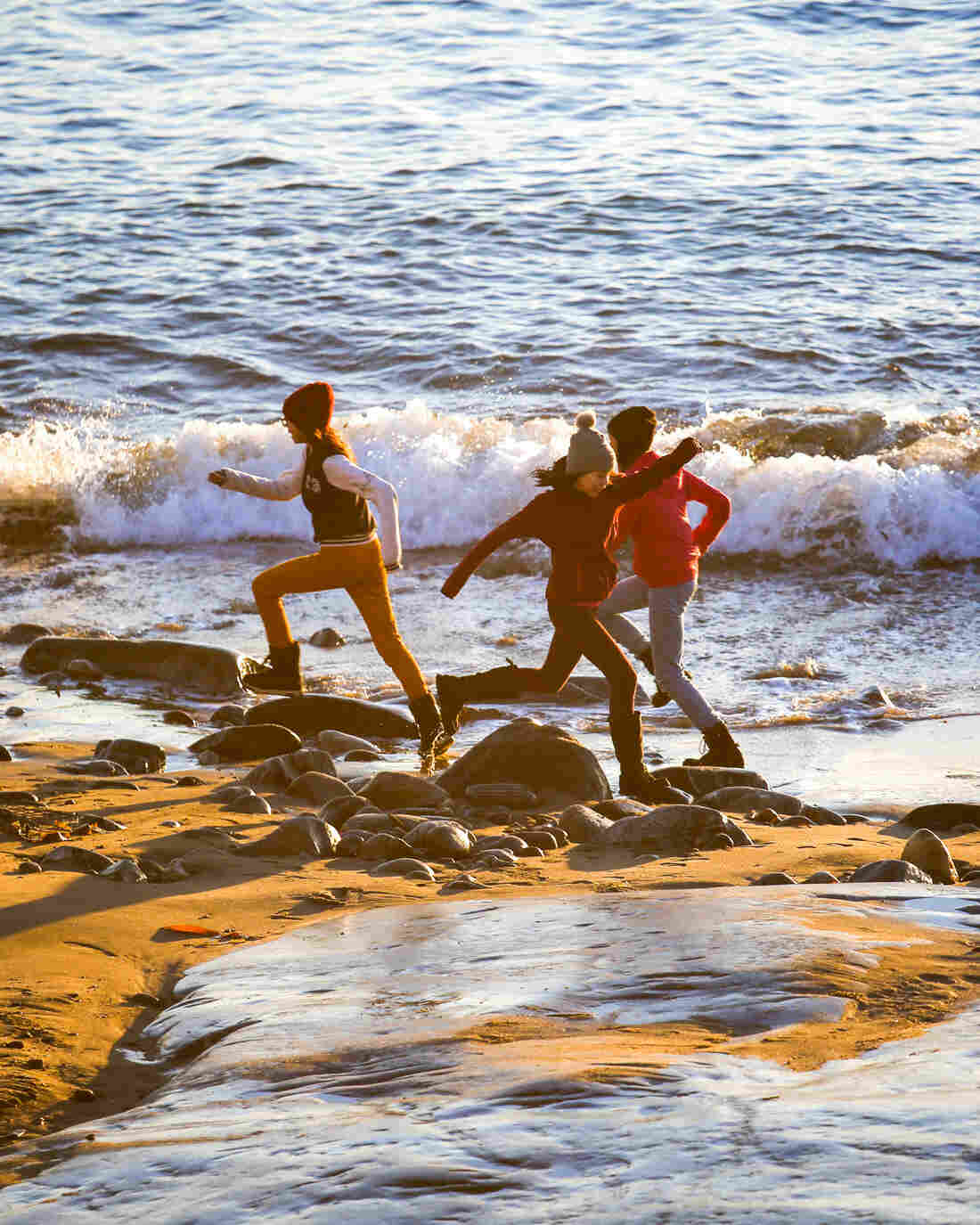 "In spite of colonization, we kept our language and many of our traditions," Olsvig says. School instruction is in Kalaallisut or Greenlandic, there's a national Greenlandic radio station, and newspapers are written in Greenlandic as well as Danish. There's even a Greenlandic translation of Harry Potter. Olsvig does say some cultural traditions, like throat singing and drum dancing, which have endured among the Inuit in Canada and Alaska, were lost for a long time in Greenland, though they are starting to make a comeback.

So what is life like in Greenland now? Montgomery-Andersen's mother is American, and he spent his sophomore year of high school in Austin, Texas, so he has had plenty of experience explaining to clueless Americans what life is like in Greenland. "I tricked people a lot," he says, laughing. "I would say 'Sure, we have polar bears and seals as pets' or 'Yes, we live in igloos!' " (In fact, Greenlanders live in houses and apartments.)

Greenlanders interviewed for this story credit the Scandinavian relationship for their democratic system of government and the provision of free education and free health care. High-speed Internet is available, Montgomery-Andersen says, even in a tiny, isolated town of 300 people that he visited.

There are challenges to living in a country that is so huge and covered in so much ice. The only inhabitable parts are out on the edges, mostly in the south, farthest from the Arctic Circle. "Because each town is far from each other and there's so few people in each town, there's no roads or train tracks," Montgomery-Andersen says. "You can't take a bus from one town to another; you have to sail by boat or take an airplane, which makes each place very isolated." 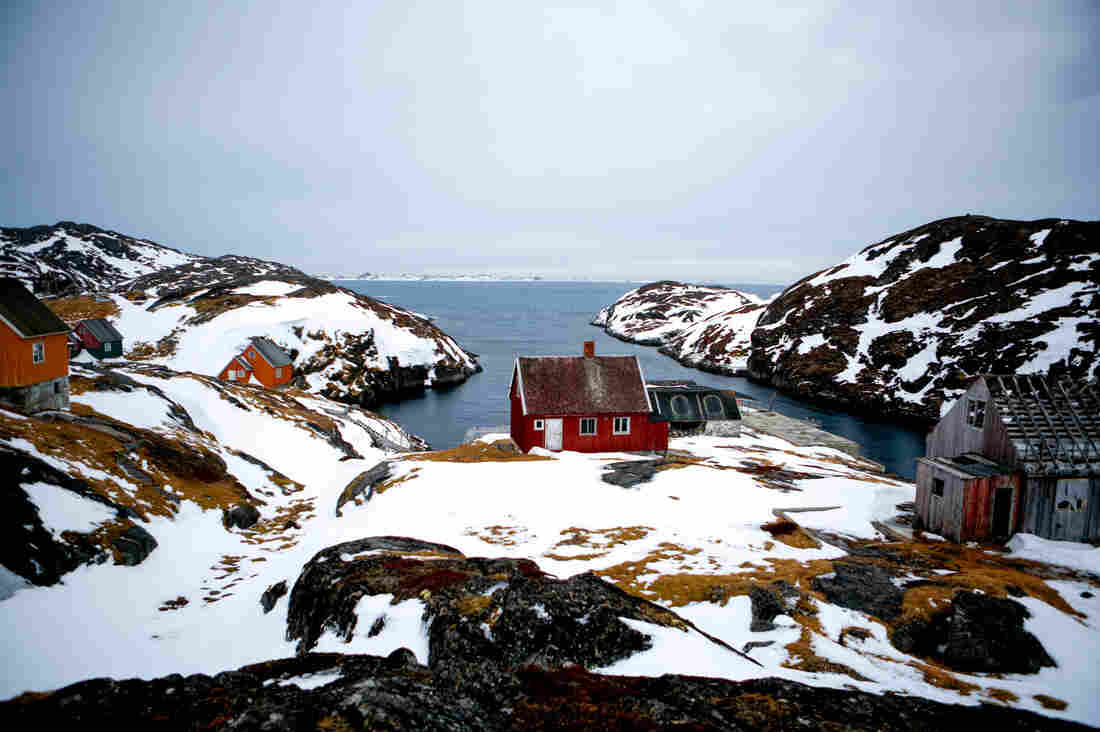 A present-day view of the harbor in Kangeq, which was abandoned by the Danish government. John W. Poole/NPR hide caption 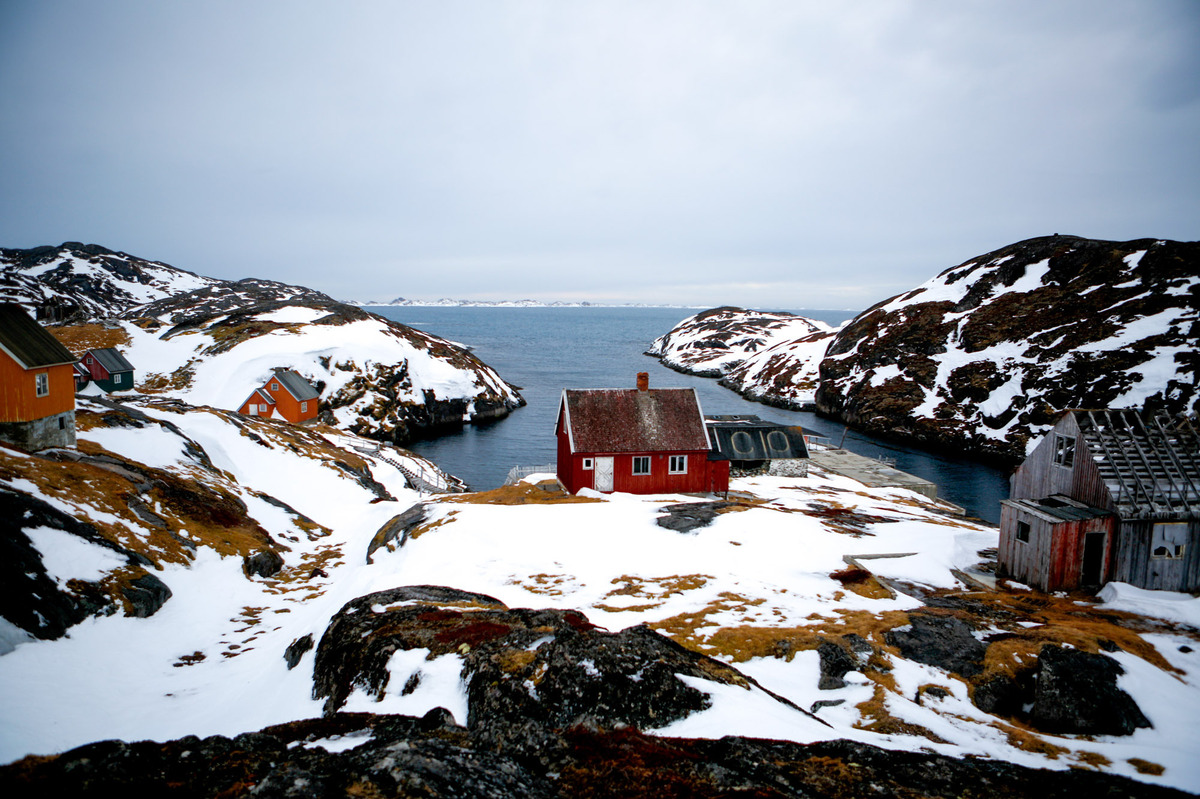 A present-day view of the harbor in Kangeq, which was abandoned by the Danish government.

The Greenlandic relationship with Denmark has been mostly peaceful, though not without pain and conflict. As NPR's Rebecca Hersher has reported, Denmark has shut down small isolated towns, moving people into bigger towns, which mental health experts say has contributed to Greenland's extremely high suicide rate. Olsvig also points out that up until the 1970s Denmark would classify Greenlandic children as "legally fatherless" if they were born outside marriage — the law on this was not changed until 2014. "We still see the consequences of having been colonized."

The Arctic Suicides: It's Not The Dark That Kills You

The Arctic Suicides: It's Not The Dark That Kills You

The colonial status of Greenland lasted from the 1700s until after World War II, when its political standing began to change. In 1979, Greenland voted in a referendum for Home Rule, which led to the establishment of Greenland's parliament. Then in 2009, the "Act on Greenland Self-Government" went into effect, which gives Greenland the right to hold a vote on declaring independence from Denmark.

"With the self-government agreement with Denmark, all people that live in Greenland are recognized as a people pursuant to international law," Olsvig says. "We are also part of an indigenous people, and we live with these two different political categories today."

This complex history is what Trump waded into when he said he wanted to buy Greenland from Denmark.

"I hope from all of the attention that this has been given, more world leaders will learn about the rights of indigenous peoples and of all of the many different kinds of political constructions we have in the world, where people actually have the right to self-determination," Olsvig says. She believes that would be one good thing to come out of "all this fuss."

Clarification: The story previously implied that Denmark classified Greenlandic children as "legally fatherless" if they were born outside marriage until 2014. Although the law was changed in 2014, Denmark stopped the practice decades earlier.