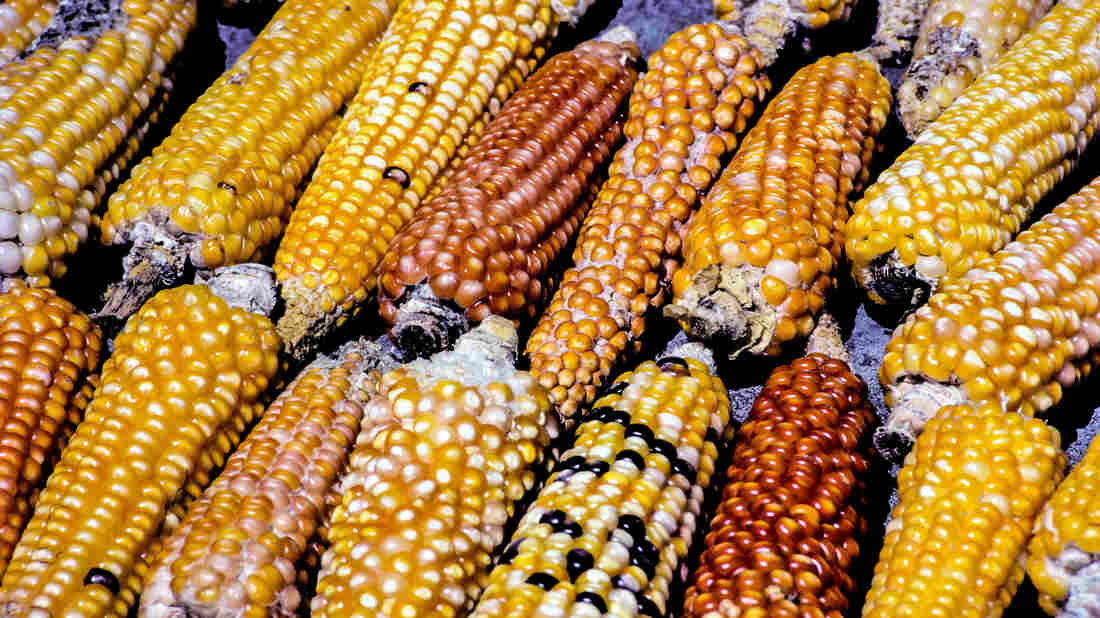 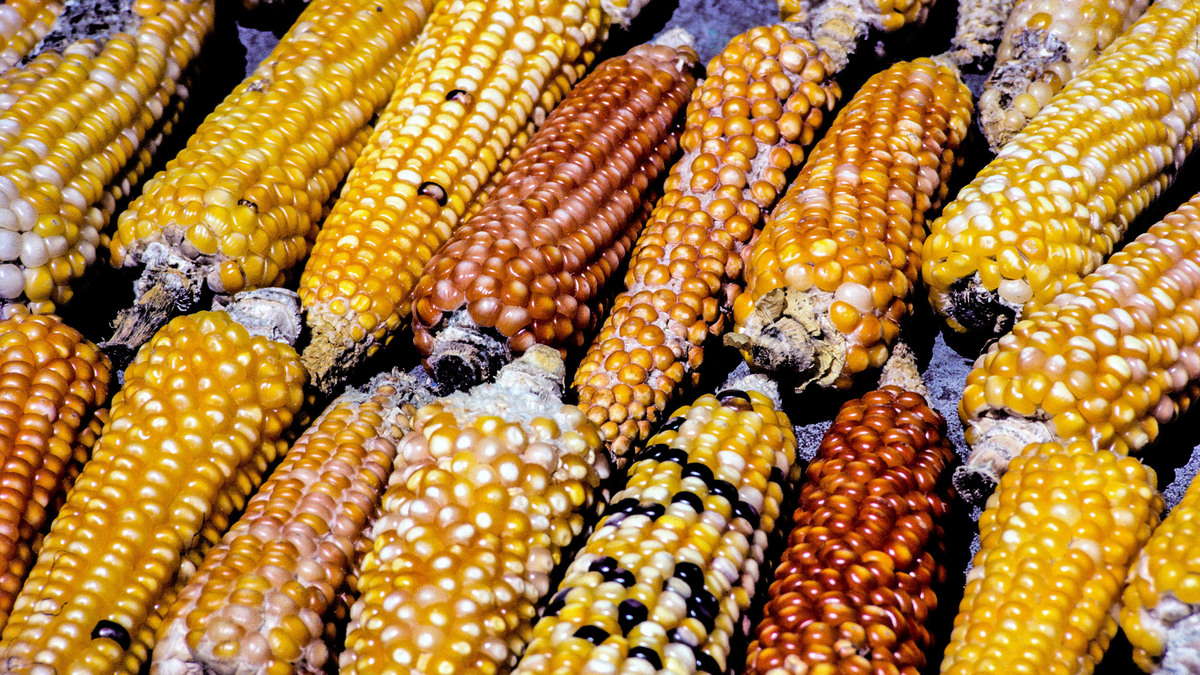 Corn from a fall harvest in Guatemala.

In a good year, Jesús García Ramos can feed his family all year on the corn that he grows in small fields around his home in the Guatemalan village of Quilinco. But this was not a good year.

On a visit in August, I met García Ramos in the field behind his house, where I found him hacking down dried-out yellow corn stalks with a machete. He had planted the corn in March. But then it didn't rain in June or July, the crucial months when kernels form on the cob. He expected his yields would be about half what he'd expect in a good year, or maybe less.

"We don't feel bad though, because we're used to it," he says.

Quilinco sits deep in Guatemala's western highlands, in an overwhelmingly agrarian region where poverty is high and child malnutrition rates hover around 70%. The region also boasts some of Guatemala's highest migration rates to the United States. Local farmers say climate change is making it increasingly difficult to get by and is one of the factors pushing people to head north.

But Quilinco has also benefited from a U.S.-funded program to help farmers adapt and improve their food security. It's a place where one agricultural aid project's impact — and the stakes of cutting such aid, as the Trump administration did this past spring — can be seen firsthand.

To get there, I rode a bus for five hours from Guatemala City and then got a ride in a pickup truck for another hour. The truck bounced up a dusty dirt road that wound up the mountains, through pine trees and a patchwork of little fields of corn and broccoli.

Virtually everyone in the town makes a living as a farmer, planting corn in the summer for subsistence. In winter, many also plant vegetables such as snow peas and potatoes for export to the United States.

Farmers and scientists say climate change has been making agriculture more difficult. This year, the problem has been drought. Rain patterns have been more unpredictable, and storms have been stronger. Two years ago, a rare spring hailstorm shredded García Ramos' corn plants, and he lost the entire crop. In other years, hurricanes have left him with nothing.

But García Ramos has a safety net. In years that he has lost his crops, he has been able to plant again the next season thanks to a bucket of seeds he stores in Quilinco's community seed reserve. The reserve is part of an approximately $7.5 million project funded by the U.S. Agency for International Development. Called Buena Milpa, the project has worked since 2015 with subsistence farmers throughout the western highlands to improve their corn yields and help them adapt to climate change.

The project, whose name means "good cornfield," supported seed reserves in 15 communities. It also helped farmers diversify the crops they plant to feed their families and taught them soil and water conservation techniques.

The seed reserve in Quilinco is a small one-room building, painted white, that sits in the middle of a cluster of cornfields. A sign outside the building says in Spanish that it's "a measure to adapt to climate change."

"It's a form of relief from climate change because it allows us to safeguard each farmer's most important seeds," says Esvin López, who oversees the reserve. Inside, red and green buckets of seeds are stacked on shelves.

Since 2015, López has been a local project coordinator for Buena Milpa, earning about $500 each month. Then, this past March, President Trump announced he planned to freeze about $450 million in foreign aid to El Salvador, Guatemala and Honduras for failing to stop their citizens from migrating to the United States. In June, Buena Milpa's coordinators learned that the project's funding would end about six months earlier than expected.

Trump Froze Aid To Guatemala. Now Programs Are Shutting Down

Latin America experts have warned that halting aid might actually spur more Central Americans to leave for the United States. Food insecurity has been one of the primary drivers of migration from Guatemala, and climate change has been making it more difficult for small-scale farmers to feed their families.

López estimates that almost half of Quilinco's 600 residents have spent time in the United States. He isn't one of them, though as a teenager he thought seriously about heading north. Then a crop scientist working for another international aid project came to Quilinco and invited López to participate in an agronomy course, where he specialized in research on local corn seeds.

"I loved it, and I thought, 'This will be my opportunity,' " says López. "And I liked being a leader."

López helped set up seed reserves like the one in Quilinco throughout the western highlands. Then, he and the scientists he works with started crossing the seeds they collected to create new varieties that would be more productive and resistant to storms, pests, drought and other problems exacerbated by climate change.

Inside the Quilinco reserve, López pulls out a small paper bag filled with one of these varieties, labeled "Population One." The translucent white seeds were created by crossing corn from Quilinco with a native variety from another region, where corn plants are shorter. The result is a plant that's adapted to Quilinco's climate but doesn't topple over as easily during storms. 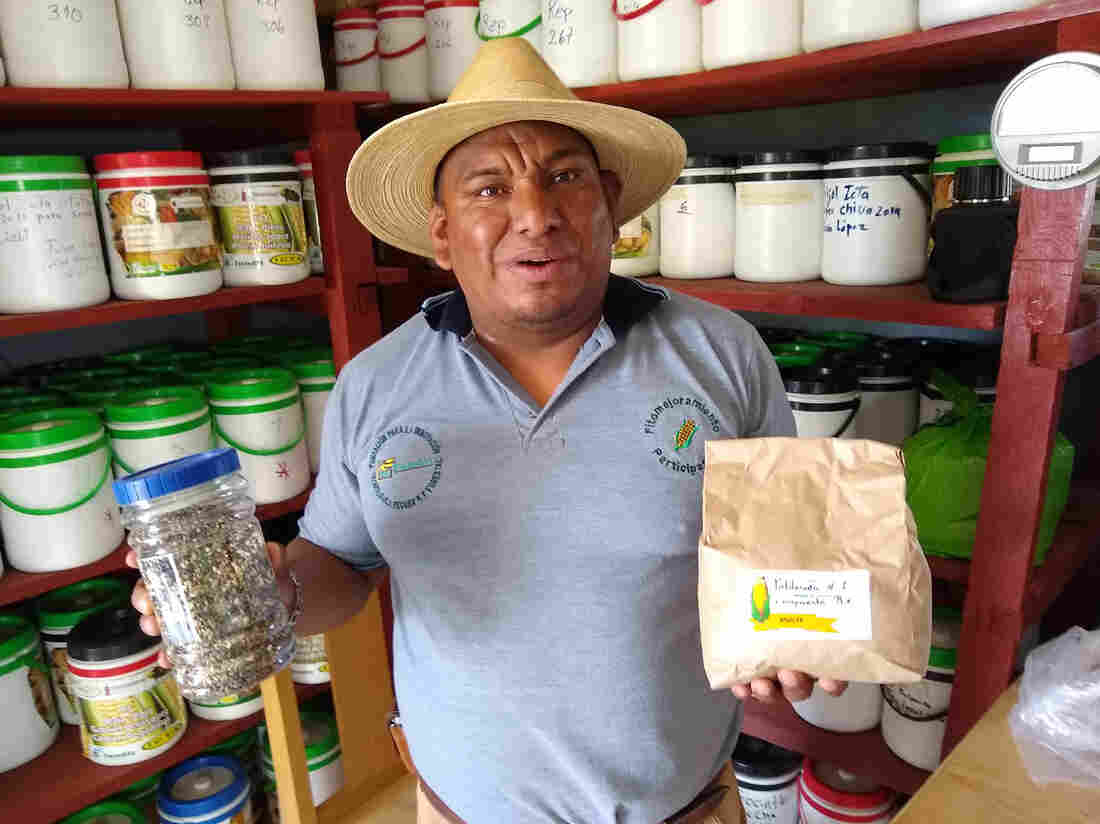 Esvin López oversees the USAID-funded seed reserve in the Guatemalan village of Quilinco. He holds a jar of seeds he's collected for research and a bag of hybrid seeds for cornstalks that can cope with climate-related challenges like windstorms. Alissa Escarce hide caption 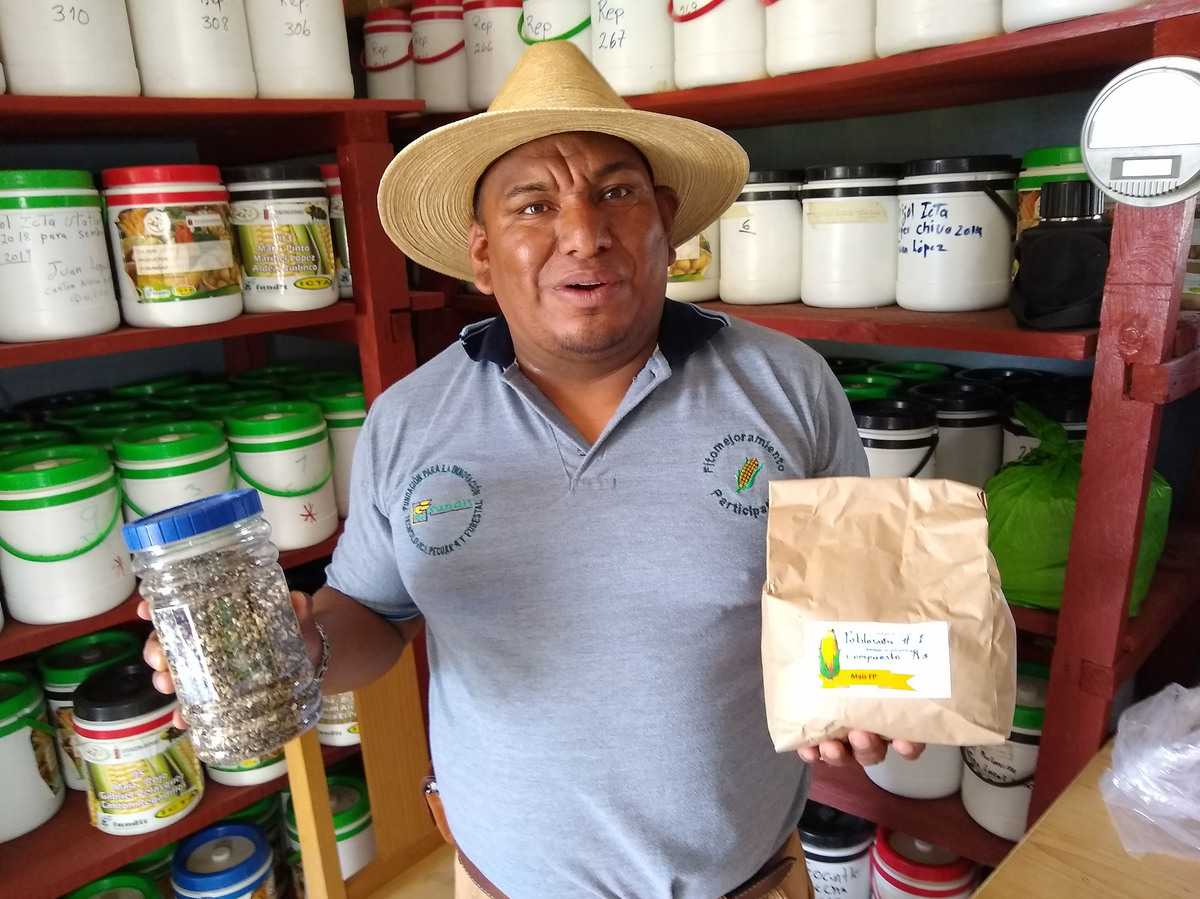 Esvin López oversees the USAID-funded seed reserve in the Guatemalan village of Quilinco. He holds a jar of seeds he's collected for research and a bag of hybrid seeds for cornstalks that can cope with climate-related challenges like windstorms.

José María García Funes, another local farmer, has been growing a drought-resistant variety this year. He lives at the bottom of a steep hill that's thick with trees.

Behind the trees, his corn plants are green and healthy, with fat, nearly ripe ears of corn.

García Funes got involved with Buena Milpa four years ago. He'd just returned from living in Chicago, where he worked in a factory that made spice mixes for fast-food chains.

"I saw that the neighbors' corn wasn't growing as tall as mine, and the wind didn't knock it over as easily," he said. "So I decided to get involved."

The program also trained García Funes in the latest growing techniques, like how to select the best seeds to plant from year to year and how to store seeds by keeping them dry after the harvest. Now he has been harvesting almost twice as much corn as he used to. Several farmers in Quilinco told me that working with Buena Milpa had increased their yields and helped them feed their families. One of them says he has been growing six times more than before.

Still, the improved corn yields haven't kept García Funes' children from migrating. In fact, if not for his own migration, he himself wouldn't have been able to grow much corn at all. He used some of the money he earned in the U.S. to buy the land where he grows this corn. And his sons are following in his footsteps. One of them recently came home after a few years in Oregon and bought fields where he's now growing broccoli. Another left for Washington state last spring.

They're not the only family of farmers to rely on money earned in the U.S. to get by. García Ramos, the farmer who lost his crops to a hailstorm, is able to buy food in bad years with money his son sends from California.

Even López says his work with farmers probably hasn't made migration less appealing in Quilinco.

When it comes to migration, he says, money is the key. He says it's almost impossible to buy land to farm on in Quilinco without doing a stint in the United States. So far he has survived on his U.S.-funded salary, but it has never been enough to buy land of his own.

This summer, after learning of the funding cuts, López started thinking about heading north himself. Over the summer he went to his 7-year-old daughter and asked her, "What do you think? Do you want to go with me to the United States?"

She said no — she wanted to stay in school here.

López hopes to stay in Guatemala with his wife and daughter — and to find a new job doing research on local corn.

Beyond López himself, the cut in USAID funding may not affect migration from Quilinco. But the corn project wasn't designed to stop migration. It was intended to reduce poverty and malnutrition.

With the funding gone, Quilinco's seed reserve will remain, although without any staffing. López's research on new varieties has ground to a halt. And farmers won't receive any more training. They'll be left with fewer tools to weather climate change.

Alissa Escarce is a producer at NPR's Latino USA. Reporting for this story was supported by the UC Berkeley-11th Hour Food and Farming Journalism Fellowship.