Accessibility links
Toilets In Rohingya Refugee Camps Have An Innovation That Helps Pregnant Women : Goats and Soda On a visit to Rohingya refugee camps in Bangladesh, a toilet expert was thrilled to find a thoughtful innovation. 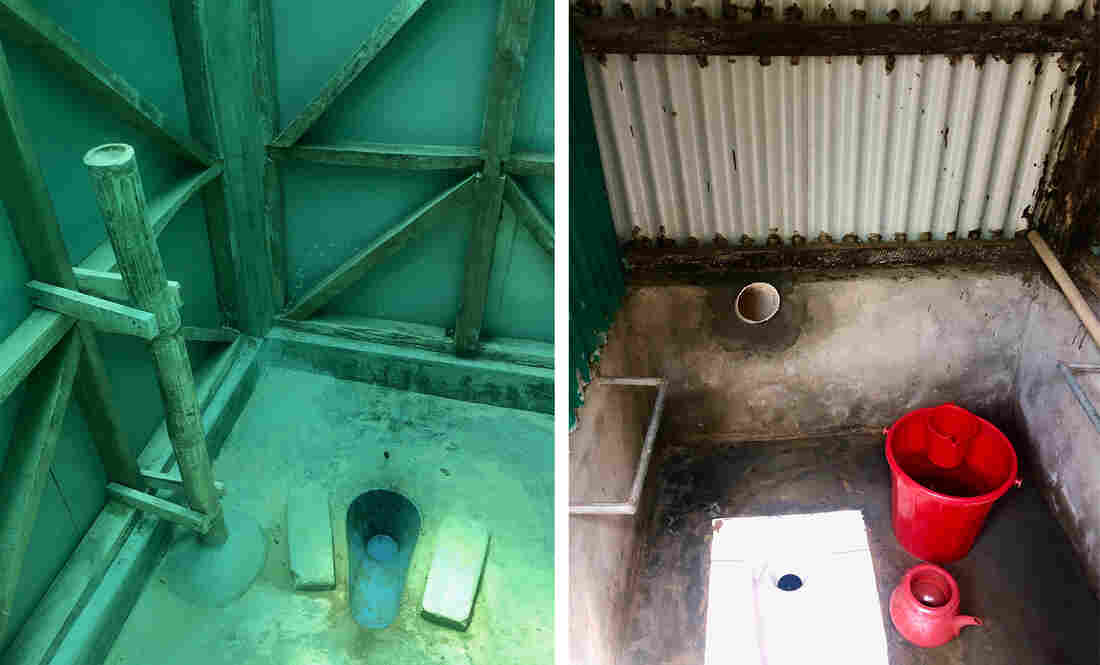 These toilets in the Rohingya refugee camps in Bangladesh were designed to be friendlier for pregnant women by giving them something to grab onto when using a squat latrine. At left: A long bamboo pole was installed next to a latrine from Oxfam International. At right: A metal handle sits alongside a squat toilet provided by the Bangladesh Red Crescent Society supported by the Danish Red Cross. Maggie Schmitt/Columbia University Mailman School of Public Health hide caption 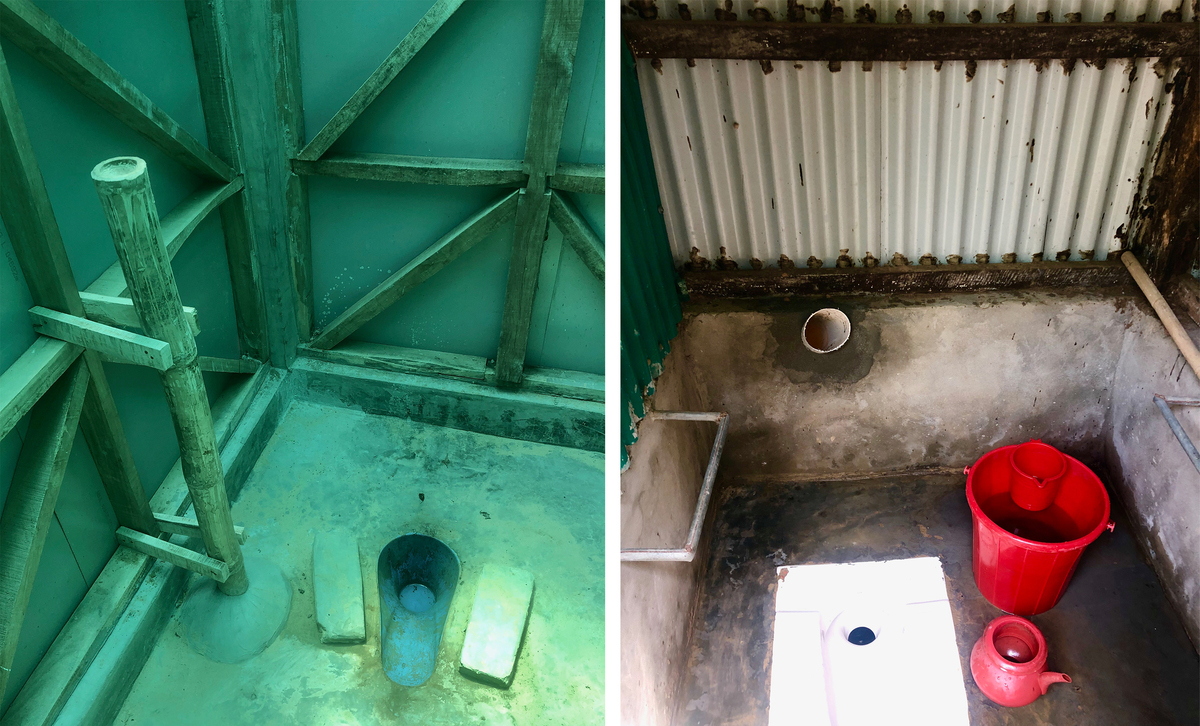 These toilets in the Rohingya refugee camps in Bangladesh were designed to be friendlier for pregnant women by giving them something to grab onto when using a squat latrine. At left: A long bamboo pole was installed next to a latrine from Oxfam International. At right: A metal handle sits alongside a squat toilet provided by the Bangladesh Red Crescent Society supported by the Danish Red Cross.

Last month, I discovered a wonderful innovation in an oppressive place — the Rohingya refugee camps in Bangladesh.

The camps host members of the Rohingya ethnic group, many of whom fled Myanmar in 2017 in response to widespread violence. Almost one million of them live in these camps along the Bangladesh coast.

It's a precarious existence. Little shelters and toilet facilities perch on hillsides that are vulnerable to landslides during monsoon season.

I was part of a team from Columbia University and the International Rescue Committee. Our main mission was to look at sanitation. And so we examined the latrines.

In my career, I have had a single-minded focus on menstruation — and how sanitary facilities often do not meet the needs of a woman who has her period. But in Bangladesh, I saw latrines that had been thoughtfully constructed to serve another type of user. The toilets met the unique needs of pregnant women — and all it took was the installation of various handles inside the latrine walls for those in need of additional support and balance when squatting and while washing themselves.

In discussions with women in the camps, we heard how grateful they were to have the handles for the very pregnant, using their hands to demonstrate the precariousness of balancing with a swelled belly.

The toilets were constructed by the Bangladesh Red Crescent Society supported by the Danish Red Cross, and by Oxfam International. I learned that they consulted extensively with women in the camps where they are working to come up with the idea of multiple handles.

Through their discussions with women, the organizations came up with two differing models. Both types of toilets were constructed next to washrooms. In one, a sturdy bamboo pole was installed alongside the squat latrine. The second approach was adding a strong metal handle – positioned in front of the household squat latrines and on the wall alongside the squatting area in the community safe space facility. Household latrines serve clusters of five families who are responsible for keeping them clean; latrines at a community facility serve all of the people who receive services in the area.

While conducting a focus group discussion with women in one of the camps to get their reaction to the latrines, we heard how the new handles have a dual purpose. Elderly women may be more frail than others around them. They are able to feel dignity and comfort in using the toilets, whose handles help them keep their balance as the pregnant women do. The communal facility also included handles in the latrines for men, assuring that elderly men would also have support as needed when squatting in the toilet.

For almost two decades, I have been fascinated by the very unsexy topic of toilets – how to assure girls and women managing their menstrual periods in settings around the world where resources are scarce have access to safe, clean toilets.

Recently, a number of us working on the issue of toilets have promoted the idea of a new norm in such settings — a "female friendly toilet." Imagine toilets that lack things as simple as a door, a lock on the inside of the door, some water inside to wash blood off your hands or clothes when menstruating, a hook or a shelf inside so you don't have to place clean menstrual pads or cloths on the dirt — or more likely muddy — floor.

And there should be a way to dispose of used products aside from just dropping them down into the latrine, which while convenient ultimately shortens the lifespan of that toilet. It could be as simple as a trash can with a lid, given existing taboos around someone seeing a used menstrual cloth or pad.

In the Rohingya camps, the same organizations are coming up with innovative ideas to address this issue as well, building "disposal chutes" on the side of female toilets. A woman can slide her used material into a chute that leads to a covered deep waste pit, to be emptied as needed. This addresses the taboo around used cloths or pads, which had led to women going out late at night or arising before dawn to bury such material when no one was looking.

A new norm for female toilets requires only small modifications to existing design, as highlighted in the Menstrual Hygiene Management (MHM) in Emergencies Toolkit co-published In 2017 by Columbia University and the International Rescue Committee with 27 humanitarian relief organizations with the support of the British Government (Elrha).

Small adaptations can reduce the vulnerability of women and girls to injury, keeping them from slipping while using the toilet, especially at night, and can improve their ability to wash themselves. That increases the likelihood that they will use the latrines rather than seek out a private space in a crowded camp, making them vulnerable to shaming or violence.

There are innumerable pressing and urgent needs in refugee camps: preventing infectious disease, assuring that people get enough to eat, protecting girls and women in particular from sexual and physical violence.

But these critical aspects of assuring the health and well-being of refugees do not negate the urgent need to assure that their daily sanitation needs – the needs of all humans everywhere in the world to use the toilet multiple times during the day (and frequently at night) – are being met. Our respect for human dignity and the human right to health demands it.

And in this case, one solution is as simple as a handle on the wall.