Accessibility links
Bill Of Rights For Global Girls Presented At U.N. To Mark International Day Of The Girl : Goats and Soda The bill addresses education, sexual violence and other key issues. "Many girls in my country don't even know what their rights are," says Kanchan Amatya of Nepal. 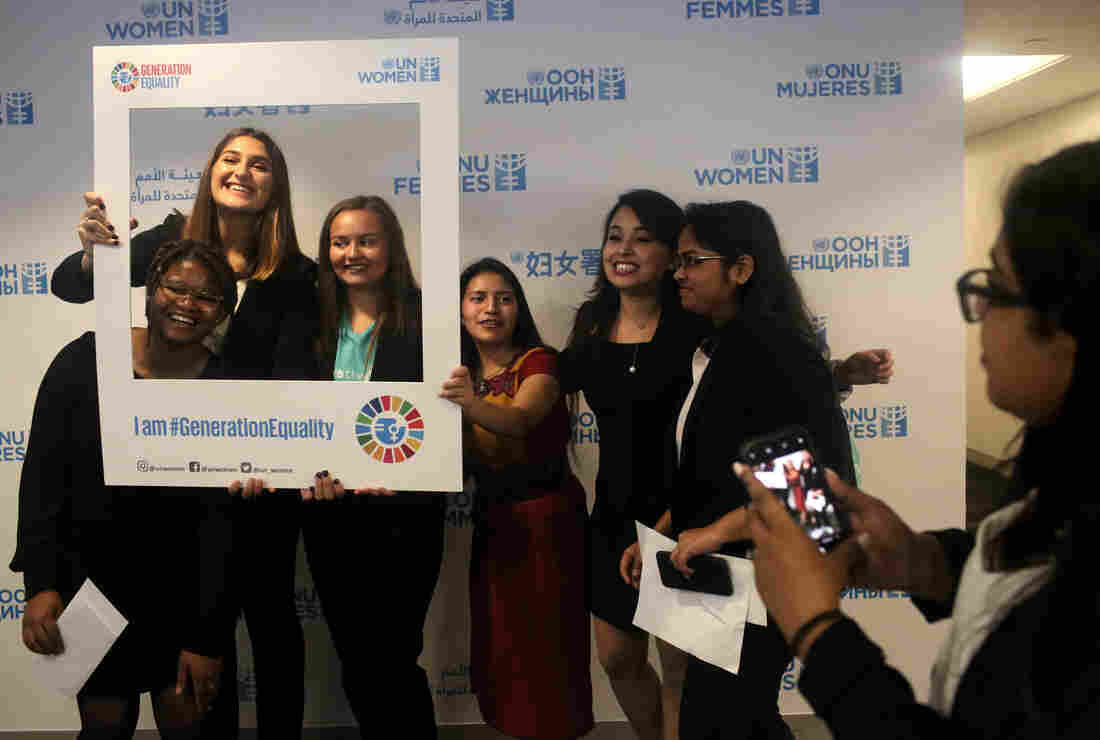 A lighter moment on a serious day: the presentation of a Global Girls' Bill of Rights at the U.N. Left to right: Six of the young women who helped draft the document: Faith Nwando, 17; Djellza Pulatani, 17; Olivia Lombardo, 16; Angelica Morales, 21; Kanchan Amatya, 22; and Vishakha Agrawal, 20. Yana Paskova for NPR hide caption 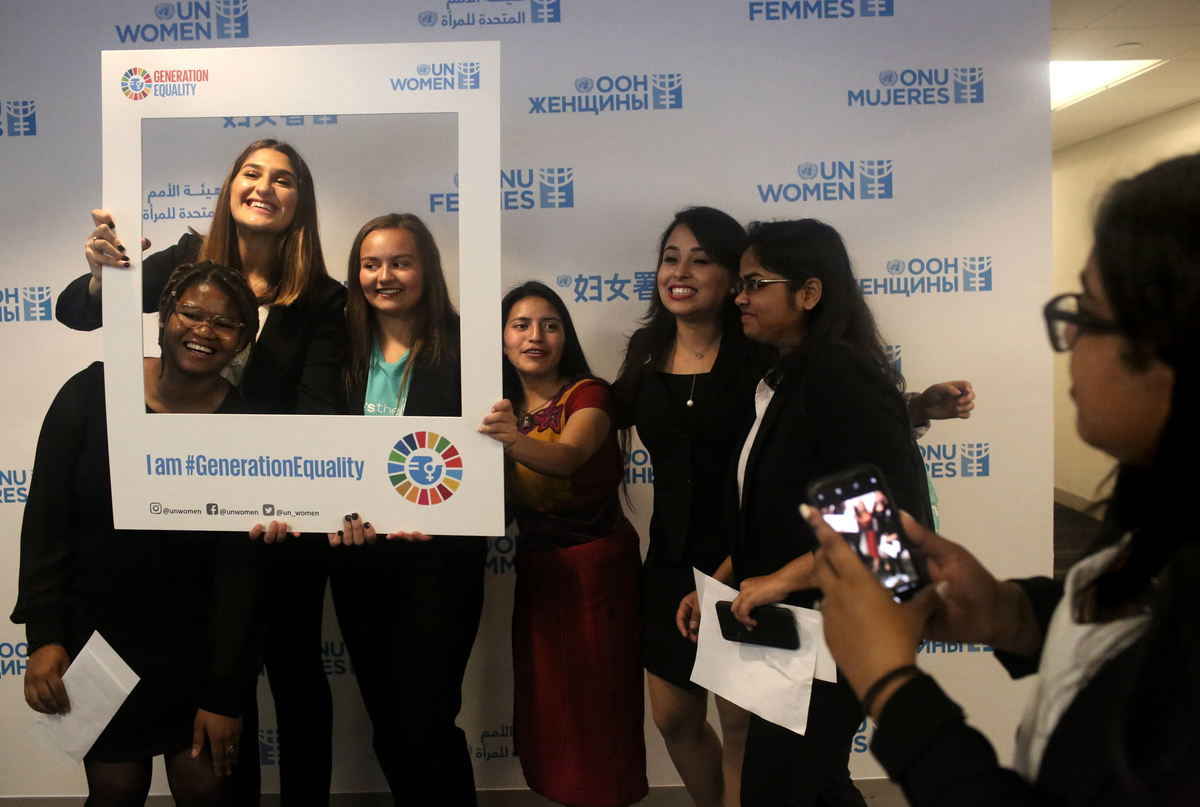 A lighter moment on a serious day: the presentation of a Global Girls' Bill of Rights at the U.N. Left to right: Six of the young women who helped draft the document: Faith Nwando, 17; Djellza Pulatani, 17; Olivia Lombardo, 16; Angelica Morales, 21; Kanchan Amatya, 22; and Vishakha Agrawal, 20.

Six young women went to the U.N. yesterday to present a document that has no precedent: a Global Girls' Bill of Rights.

To those who might ask why such a bill of rights is needed, Kanchan Amatya, one of the six, has an answer. She's 22, a Nepalese activist who created a nonprofit in Nepal to support young women farmers in rural areas.

"Many girls in my country don't even know what their rights are," Amatya says, and as a result, "they are without resources" or recourse when they face discrimination. 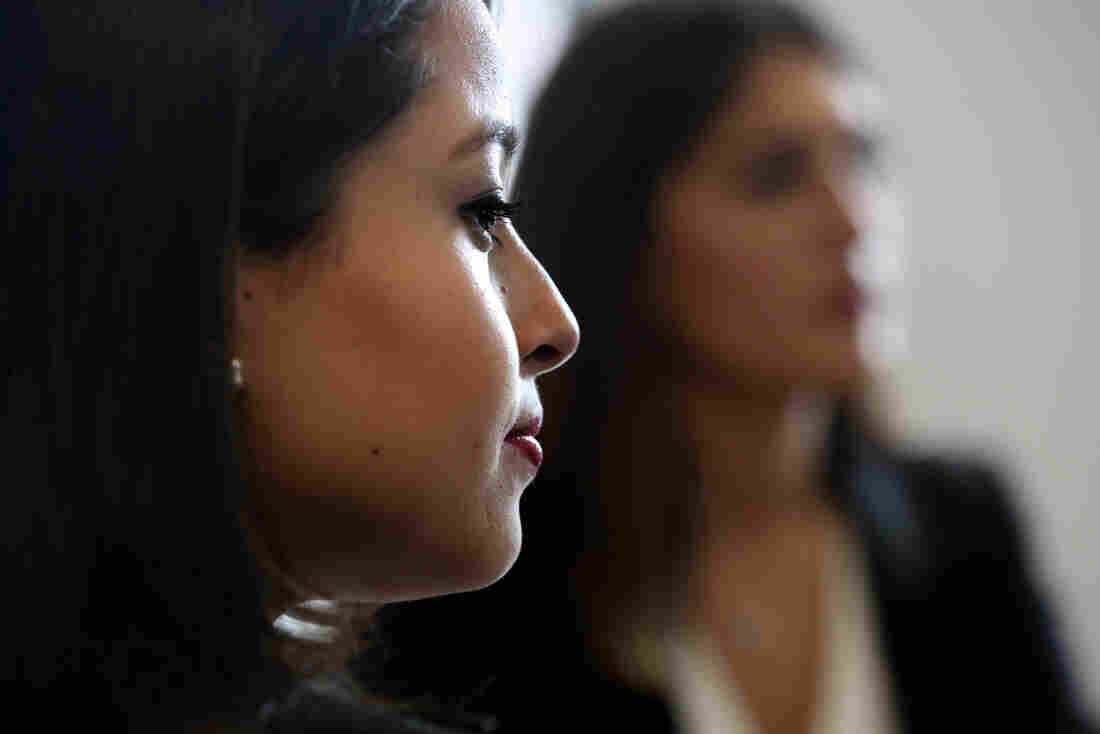 Kanchan Amatya of Nepal, 22, and Djellza Pulatani of New York, 17, are among the drafters of the Global Girls' Bill of Rights. Yana Paskova for NPR hide caption 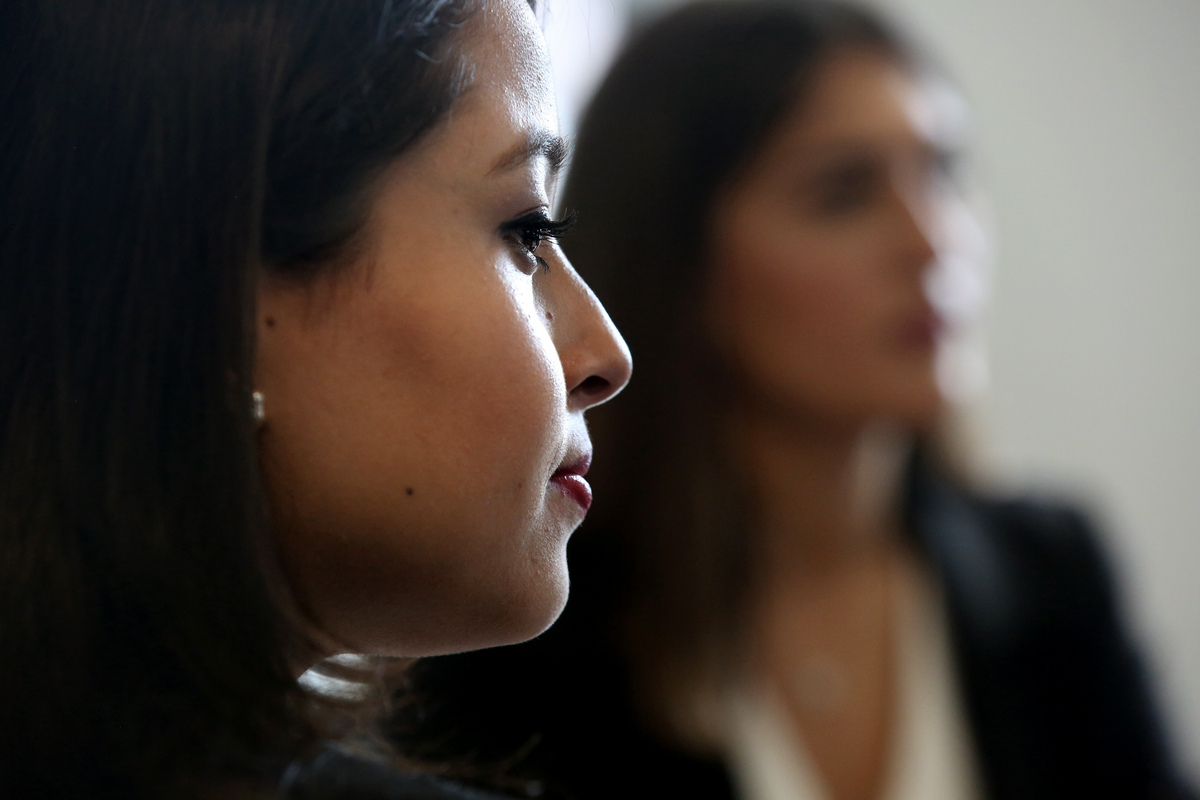 Kanchan Amatya of Nepal, 22, and Djellza Pulatani of New York, 17, are among the drafters of the Global Girls' Bill of Rights.

The project was initiated by the nonprofit advocacy group She's the First in March and organized with Akili Dada in Africa, MAIA in Central America and a consortium of other nongovernmental groups.

Starting this summer, more than 1,000 females, age 13 to 22, from 34 countries, contributed their thoughts. Then a team of 15 young women worked together across seven time zones, via WhatsApp, to come up with the document.

This week six young women from the team brought the document to UN Women executive director Phumzile Mlambo-Ngcuka. They hail from Nepal, India, Guatemala and the greater New York area; two of the New Yorkers have immigrant roots from Kosovo and Nigeria. The date of presentation was chosen to connect with today's International Day of the Girl. 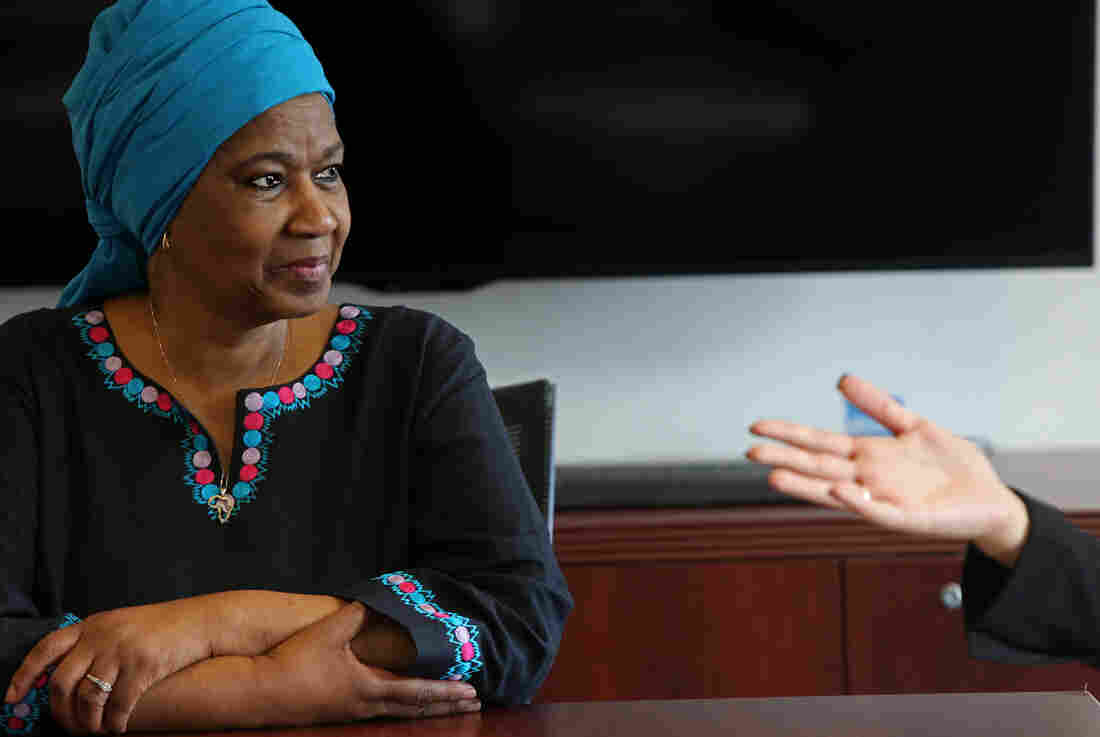 Following the presentation, and after a late pizza lunch, they spoke to NPR about their hopes for the project.

Even though the six had not met in person prior to Thursday morning, they were definitely in sync. "We're Generation Z," says Djellza Pulatani, 17, with a laugh, "so first thing we do is follow each other on social media." She's a high school senior from Long Island.

She says that she knew she was a feminist when, at age 5, after spending the day with her mother and other female family members cooking in the kitchen, she was held back from going to the dinner table: All her male cousins and relatives were eating first. This was part of the Albanian traditions which her immigrant parents had brought with them from Kosovo, putting boys first and leaving girls behind, she says, but it has parallels in many other cultures, and though there are differences among the experiences of other members of the group, the quest for equality resonates within each of them.

All six see the bill of rights as a first step. "It's not sufficient to simply present" the bill of rights, says Vishakha Agrawal, 20, who is in her second year studying information science at Dayananda Sagar College of Engineering in Bengaluru, India. "The real work starts after this" – spreading the word in local communities and working with the U.N. and other organizations to bring the rights to fruition.

The bill of rights begins with the preface, "All girls have the right to....." followed by ten points, each backed up by statistics from such sources as the U.N., UNICEF and the World Bank.

The number one item is the right to "a free, quality education which prepares them for the modern world. As many as 130 million school-age girls worldwide don't get, according to the World Bank.

Others items on the bill highlight some of the starkest challenges and obstacles females face. They include the right to:

-involvement in decision-making and pursuit of leadership positions without fear of discrimination, harassment or persecution

-safety from all forms of violence

-decision-making about their body and sexuality

-protection under the law without fear or unequal treatment

For the six young women who came to the U.N., education is the foundation.

Vishakha Agrawal, 20, who is in her second year studying information science at Dayananda Sagar College of Engineering in Bengaluru, India, says she began coding and programming when she was nine. A chief concern for her is creating equal opportunities and support for girls to study what they want — including the STEM fields (science, technology, engineering and math) in which women continue to be vastly underrepresented. Growing up, she was acutely aware of how few girls participated in the technology events that she regularly attended.

Unlike boys, she says, from early on girls are stereotypically encouraged to study non-STEM subjects, which perpetuates the dearth of women in the field. "I am only one three girls in leadership positions in college organizations relating to STEM," she says.

Angélica Morales, 21, from Guatemala, describes herself as a "proud indigenous Mayan girl" — and also an exception. That is because only one percent of indigenous females in Guatemala go on to receive a higher education. She is part of that one percent, currently studying microbiology at Universidad del Valle de Guatemala. She sees herself as a role model for others, which is essential in a country that, she says, generally marginalizes indigenous females not only because of their gender but also because of their poverty and their race. She was only able to overcome these obstacles because, at age 13, she was able to enroll at the MAIA Impact School, the first female, indigenous-led secondary school in Central America.

Amatya's story is similarly inspiring. She was born during Nepal's decade-long civil war — a conflict, she says, that claimed lives of thousands, forced children to become soldiers and subjected thousands of young girls to sexual violence.

At age 16 she applied for and received a full scholarship to pursue her high school education in Norway at United World College and then subsequently went to college. Her education made her an exception in Nepal, where 37 percent of girls marry before age 18, and 10 percent before they turn 15 — essentially ending the possibility for further education or training that would allow them future economic security.

Agrawal observes that there is another obstacle that further compounds those situations. "Many women," she points out, "still have a fear of being isolated from their traditional cultures, and we need to support them if they are" ostracized by their families and communities for opposing harmful cultural practices such as child marriage or female genital mutilation.

Faith Nwando, 17, a high school senior in Queens, also sees education as the bill's pillar, stressing in particular the need for reproductive health education, both in the United States, where she has lived for the past ten years, as well as in countries around the world, including Nigeria, where she was born. She says the plight of Nigerian school girls kidnapped by Boko Haram in 2014 sparked her involvement with women's issues.

Pulatani seconded the need for reproductive health and sex education. She spoke to junior high and school students in her Long Island community about sexual consent and says it was "mind-blowing" to discover that even in this audience, some did not know what "consent" was or its importance. She plans on presenting seminars on the same subject in Kosovo when she visits there next year.

The goal of increasing female leadership is key for Olivia Lombardo, 16, a high school junior from Staten Island, New York. As she started to pursue leadership roles at school — she is currently president of her class — she became increasingly aware of the stereotypes and obstacles female leaders face."Even in the U.S. we don't know what a female leader looks like, whether too feminine or too masculine," she says, adding that "women shouldn't need to climb over these obstacles."