Accessibility links
Juul Still Engages In Controversial Marketing Practices In The Philippines, Say Activists : Goats and Soda Even as U.S. authorities investigate Juul for marketing to minors and making unproven safety claims, the company is using those tactics to expand to poorer countries. Case in point: the Philippines. 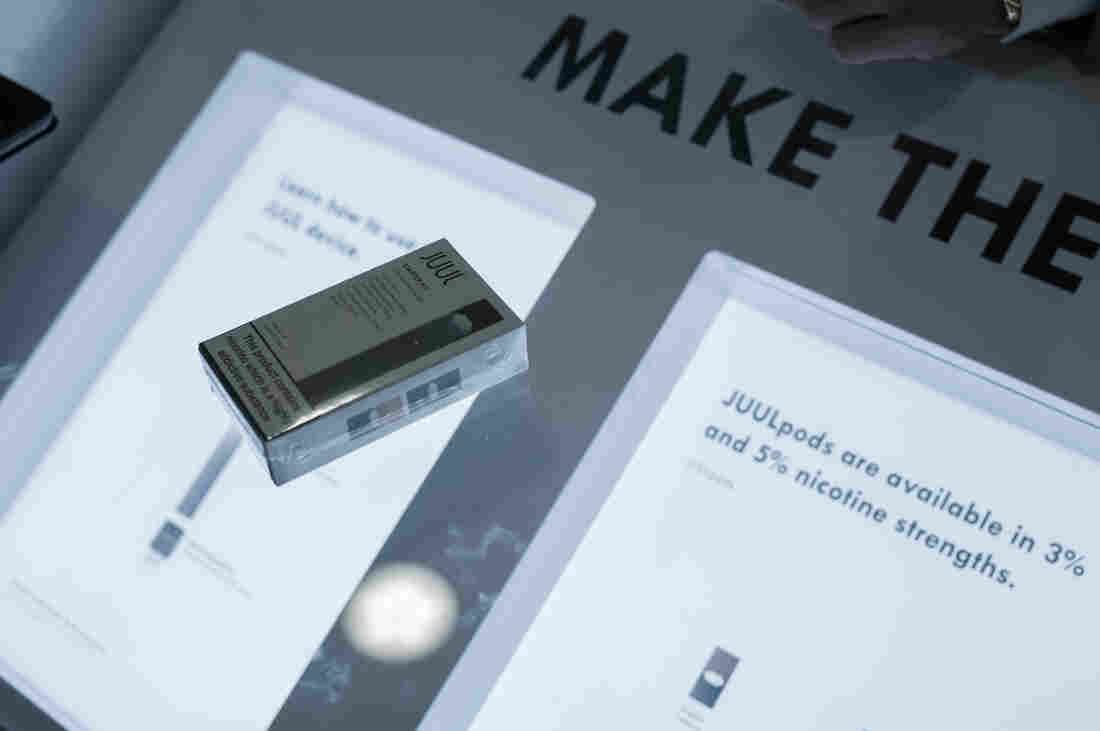 A Juul starter kit sold at a kiosk in a mall in Makati City in the Philippines. Carlo Gabuco for NPR hide caption 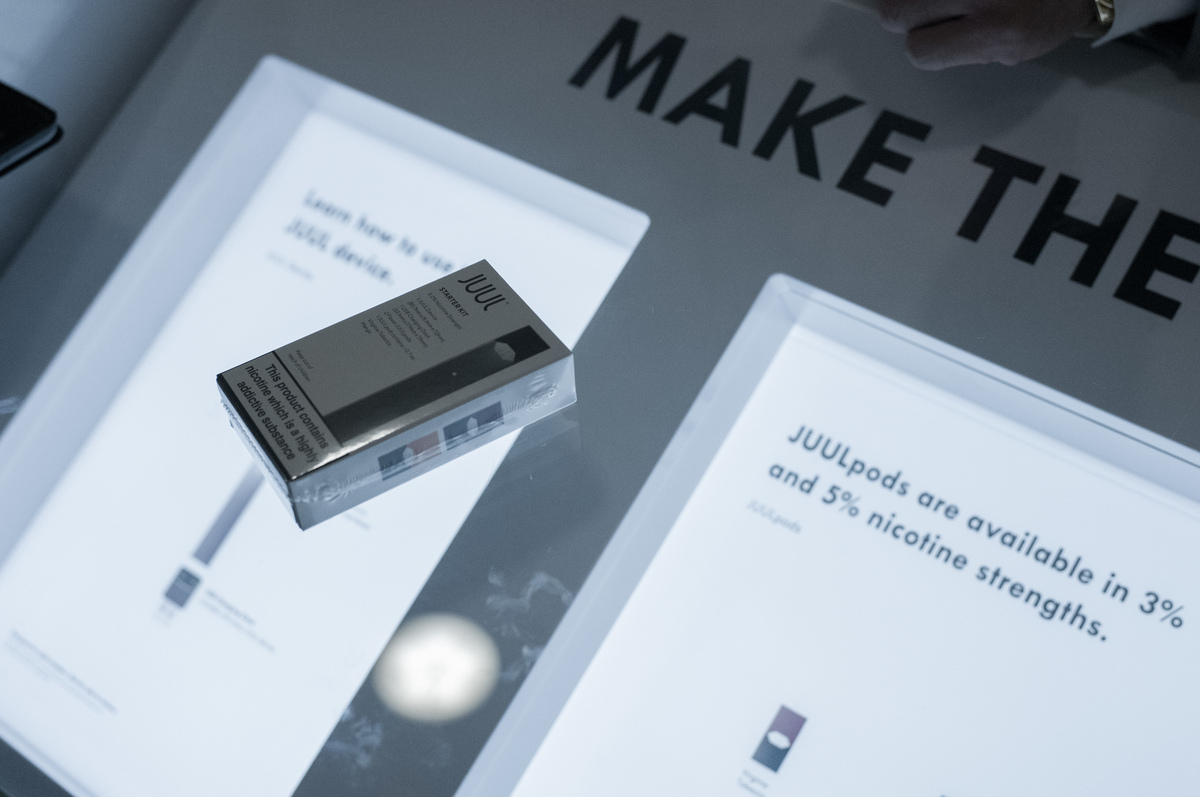 A Juul starter kit sold at a kiosk in a mall in Makati City in the Philippines.

Almost as soon as the e-cigarette maker Juul launched in the Philippines this past June, Maria Encarnita Limpin started noticing the product in shops all over the capital Manila.

Limpin is a doctor specializing in lung disease and also directs a nonprofit that has helped push though rules preventing the marketing and sale of cigarettes to minors in the Philippines. So she was particularly horrified to see how visible Juul's vaporizers are in areas where children are likely to see them.

At one of Manila's biggest convenience chains, she says, the new Juul displays are often right at the entrance. Then there was the placement of a Juul promotional kiosk in a shopping area. "It was very near Baskin-Robbins," she says, "you know that famous ice cream company?"

Limpin adds that just like Baskin-Robbins, in its Philippine stores Juul is offering an assortment of flavors that seem tailor-made to appeal to teens: "Mango flavor, mint flavor," she ticks them off. Also "creme." 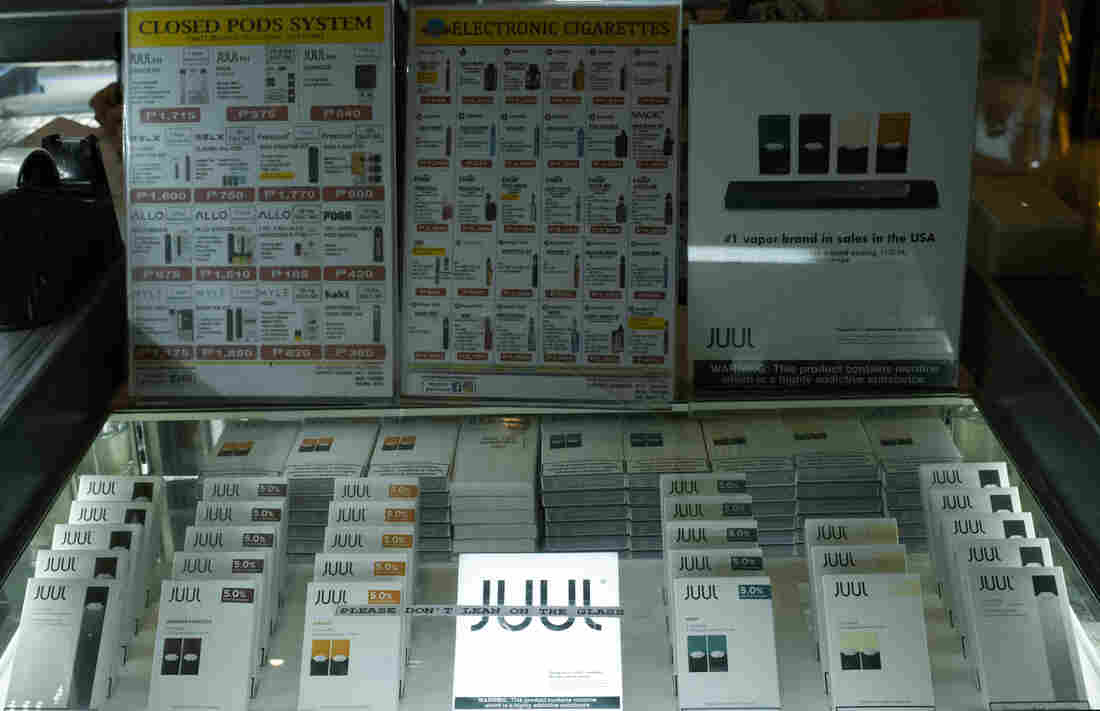 A vaping kiosk in a mall in the Philippines sells Juul e-cigarette pods, including fruit and other nontobacco flavors that the company has pulled from U.S. stores. Carlo Gabuco for NPR hide caption 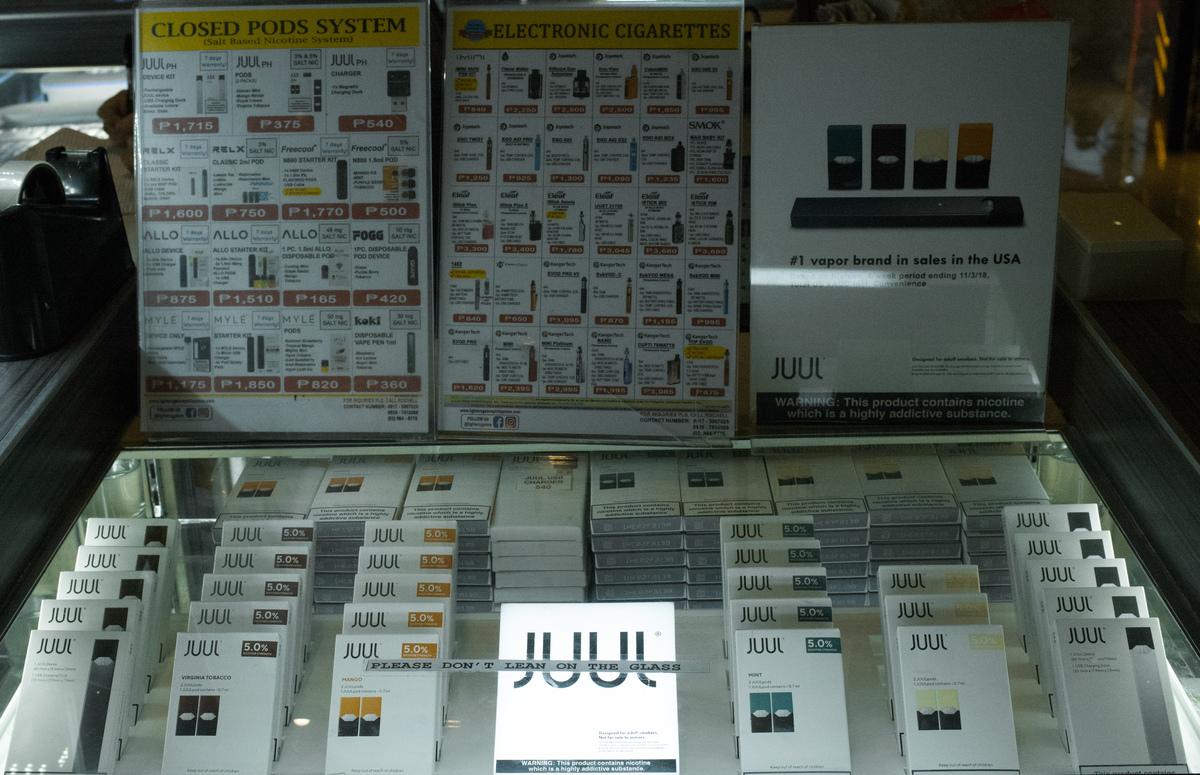 A vaping kiosk in a mall in the Philippines sells Juul e-cigarette pods, including fruit and other nontobacco flavors that the company has pulled from U.S. stores.

In the U.S., Juul is facing a lot of scrutiny. There's widespread consensus that the product's introduction has led to an epidemic of vaping among young people — who are drawn by not just the flavors but the vaporizer's slick, modern design and a sense that vaping doesn't carry the same risks or stigma as smoking.

Authorities have launched multiple investigations and warnings against Juul for marketing to teens and for making unauthorized claims that its product is safe.

Now health advocates like Limpin worry that Juul could make up for the clampdown in the U.S. by shifting its focus to countries that are less wealthy such as the Philippines.

Shane MacGuill studies the tobacco industry for the market research firm Euromonitor International. He says that international expansion is unquestionably "an important part of the business strategy for Juul."

The company is already in 20 countries. Almost all of them are wealthy. But this spring Juul made its first foray into less well-off nations with its entry into not just the Philippines but Indonesia. And MacGuill says Juul has been laying the groundwork to launch in many more by hiring country managers in a slew of nations as well as in cities that will function as regional hubs.

"If you look at where the majority of tobacco and nicotine consumption takes place globally, it is in lower middle income markets," says MacGuill.

For now, adds MacGuill, most consumers in those poorer countries can't afford Juul products. (The vaporizer sells on Juul's Philippines website for about $30. And each two-pack of pods costs nearly $7.) But MacGuill says Juul has been banking on the possibility that eventually incomes in those countries will rise.

"The strategy was really built around making sure that the brand was in a position to access that sort of potential growth," says MacGuill.

So in the medium- to long-term, places like the Philippines could become important markets. And Limpin, the health advocate, says she already sees signs that Juul is behaving very differently in the Philippines compared to the U.S.

For instance, one of the U.S. Food and Drug Administration's investigations centers on whether Juul's fruit and other nontobacco flavors constitute illegal marketing to kids and should therefore be banned. In response, Juul has voluntarily pulled these flavors from U.S. stores.

That hasn't happened in the Philippines.

Limpin, says in her country, "There's really no good law that will protect us from these kind of tactics."

In July, the Philippine Food and Drug Administration tried to issue an administrative order that would have prohibited the sale of e-cigarettes to minors and limit how and where they can be marketed. But two Philippine e-cigarette companies have tied up the order in court. So according to Ana Trinidad Rivera, director of the relevant department at the Philippine FDA, the status of the order is now "under discussion by the government lawyers handling the case."

Also at issue: The messages Juul puts out about the safety of its product.

Dr. Albert Rizzo is chief medical officer of the American Lung Association. He notes that while vaping doesn't involve combustion, it does still use chemicals. And "some of these chemicals are carcinogens, very similar to ones that are in regular cigarettes."

The vapes contain a lower quantity of the chemicals, he adds. But vaping is still a fairly new phenomenon. "So we really don't know what mid-to-long term effects inhalation of these chemicals would lead to," says Rizzo.

The lack of definitive information means that under U.S. law, Juul is prohibited from describing its product as safe — or even saying it's safer than smoking. Last month the FDA warned Juul that some of its marketing does just that. The agency ordered Juul to stop immediately.

But the company faces no such constraints in the Philippines. And Limpin says that when, as an impromptu experiment, she sent her 19-year-old son to a Juul kiosk in Manila, the salesperson told him that using Juul is safer than smoking because it won't cause cancer — and made no mention of any risks from vaping.

Limpin adds that this is one of many instances — including public events and hearings in the legislature — where Juul is "actually marketing [its product] like it's not going to cause any problems."

NPR asked officials at Juul why the company's practices around safety messaging and flavors appear to differ between the two countries.

In a statement, Juul officials noted that the company recently appointed a new CEO. And they said both he and "the entire Juul Labs leadership team is continuing a broad review of the company's practices and policies to ensure alignment with its aim of responsible leadership within the industry."